That's FarmingThat\'s Farming Irelands Largest Farming News, Properties and Classifieds Network
HomeBeef‘There are too many poor-quality cows being bulled for beef in this... 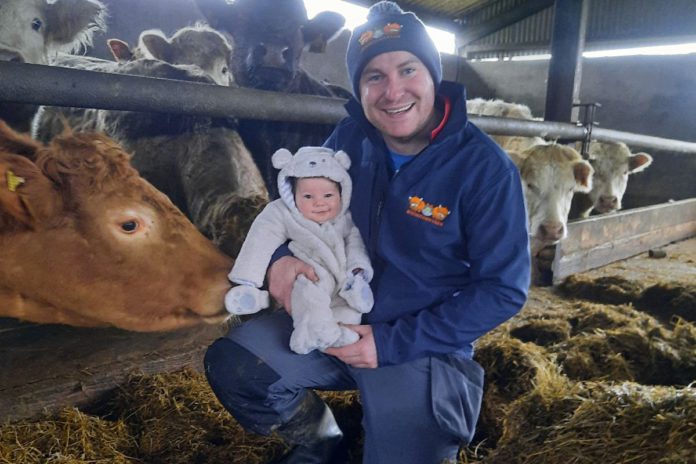 In this week’s Suckler Focus, That’s Farming, speaks to Liam Reilly about his 30-cow suckler herd, educating students and Instagram followers and his thoughts on the industry.

The fifth-generation farmer, who resides in Abbeylara, County Longford, enlists the help of his father, Phil, who brings “a lifetime of experience to the table”.

He told That’s Farming: “My father has a hands-on role, and there is not much a man of his experience has not seen when it comes to cattle.”

“He has always been a super judge of cattle, and I think the cattle I keep are a reflection of what I have learned from him.” 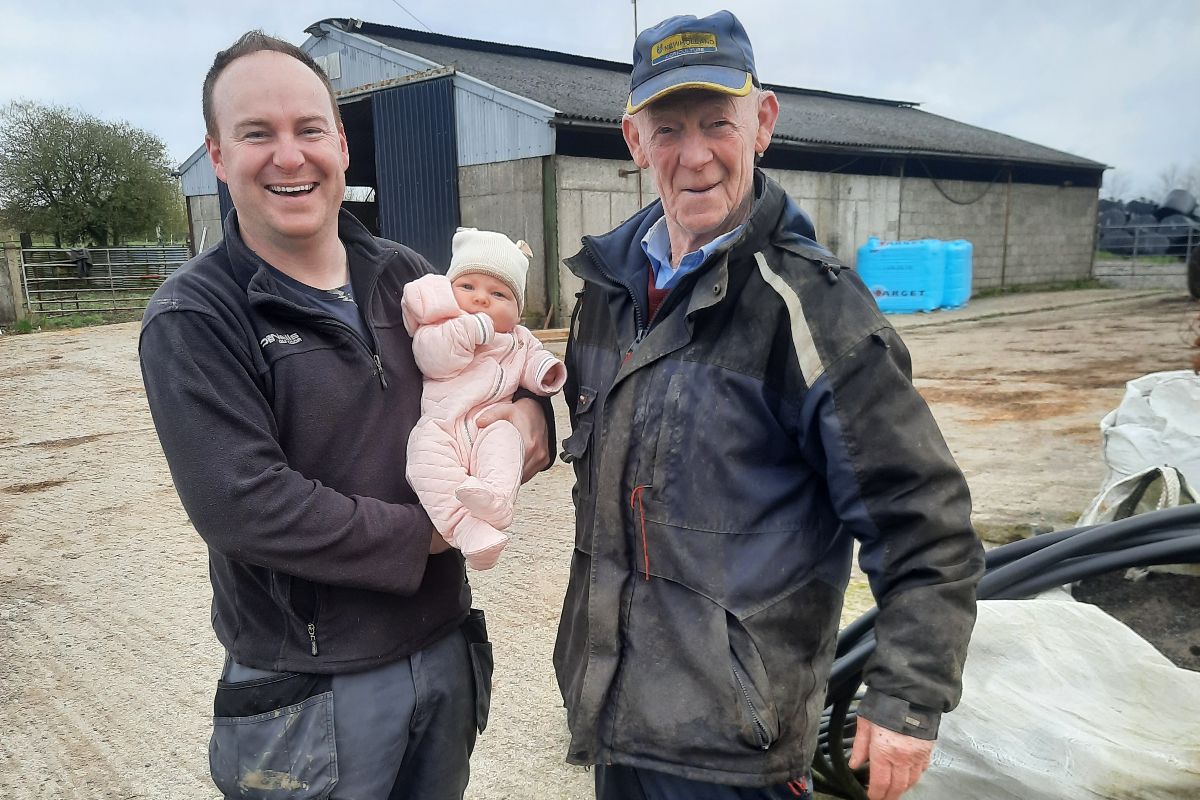 Liam farms mainly Charolais and Limousin commercial females, which he runs with a Charolais stockbull, a Cavelands Fenian, son, while he AIs replacement heifers to easy-calving Limousin sires.

He sells all bull calves as weanlings and keeps superior heifers to sell on at 24-months-old with a group that he purchases. He purchases good quality Charolais weanling heifers around 300kgs – 350kgs from December on each year to create a batch of 35 heifers, selling these in spring, averaging 550 kg.

“The market for these heifers is mainly farmers looking for bulling heifers, although some do go for beef.”

“My thinking with selling the bulls and buying the heifers is that there is only one market for weanling bulls, but there is always demand for the good quality golden Charolais heifer, regardless of what the trade is like. The day you buy is the day you sell.” 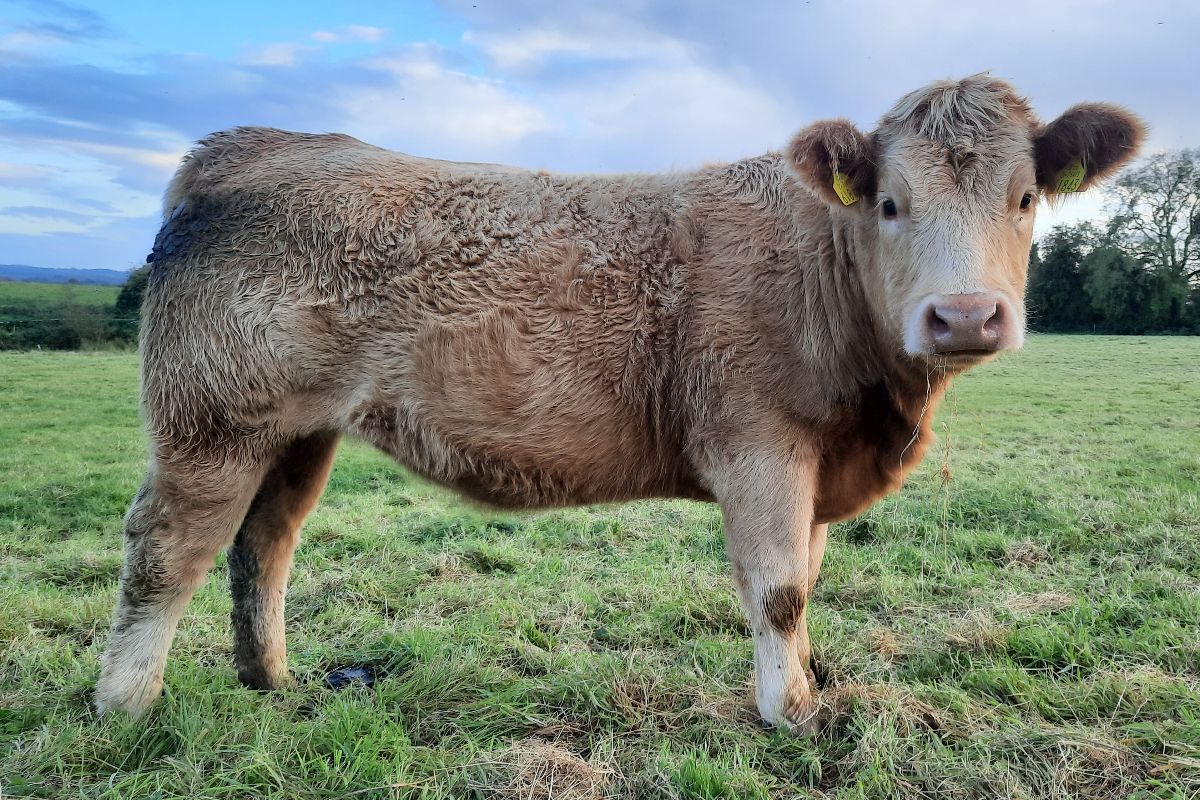 Liam farms 90-acres of what he describes as “reasonably good land”. He revealed that the most significant issue he faces is fragmentation as land is split over five separate blocks.

The Longford native acquired his own herd number in 2015 and “has not looked back since”. The part-time farmer moved from set stocking to a rotational grazing paddock system and believes this has been a “real game-changer” for grassland management.

“Now, I can take out surplus grass paddocks which would never have been done before here. Cattle always have fresh grass to hand, and calves can graze ahead into the next paddock to get the best grass.”

“Regarding stock, I am close to my limit in both time and land, and I am happy to stay around these numbers,” the 30-cow suckler herd owner explained. 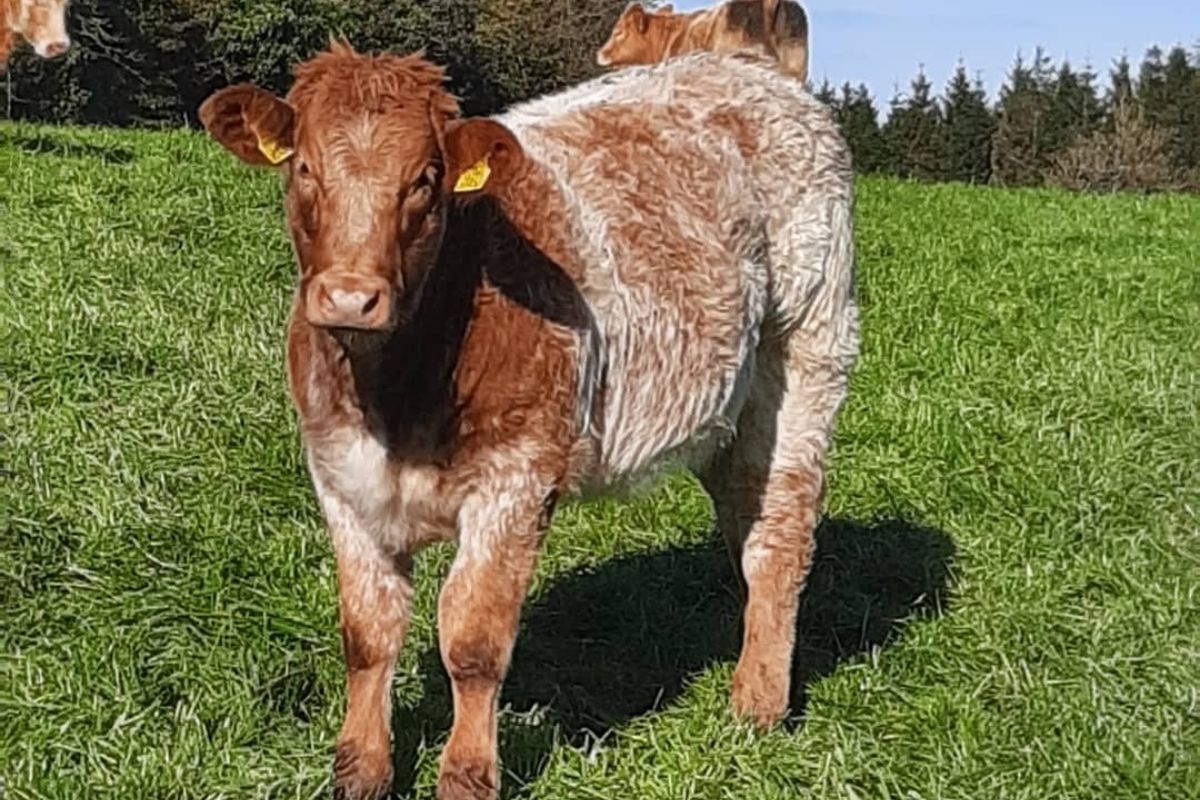 “Suckler cows are a lot of work, especially on a part-time basis. I could not keep sucklers if my father was not around during the day to keep an eye on things during calving season. You have no business calving cows if you are not around full-time or have no help.”

“I calve the herd from the end of January until April. Being part-time, it does not suit me to have calving too compact. I have mid-April as my cut off point for calving as you will not have anything worth selling in October or November after this point.”

“I replace cows due to bad feet, mastitis the previous year, docility and lastly, age. Some years you might only replace one cow; this year, I replaced seven mainly due to fertility issues. My bull went infertile, and these cows ended up getting bulled too late or did not hold to AI.”

Besides, the farm is also home to two pedigree Highland heifers, which he acquired in Scotland with the help of renowned Longford-based breeder, Michelle Shaughnessy.

She recently appeared on That’s Farming following the acquisition of Balmoral-bred Scottish Highland cattle, bred by HRM, Queen Elizabeth and the Duke of Edinburgh.

“I bought these in Scotland with Michelle’s help from the renowned Highland breeder, the late Tom Thompson of the Woodneuk Fold in Glasgow. I bought them as a present for my wife, Marian, after much begging, but I am after falling in love with them myself.”

“These ladies will be bulled this summer, and hopefully, we will have two Highland calves this time next spring. They are a real attraction on the farm, and we often have visitors call to the farm to see them,” Liam added. 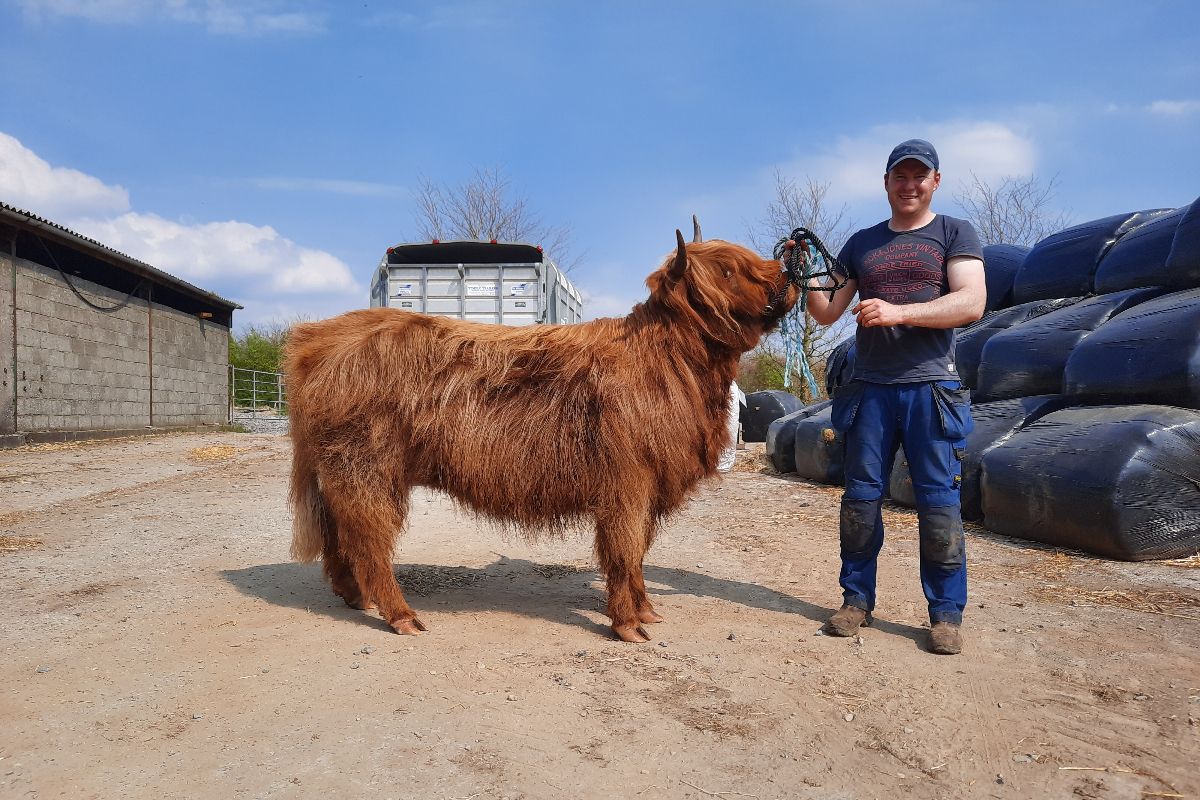 A new shed and thoughts on the industry

To further develop his farm, Liam has received approval from the Department of Agriculture, Food and the Marine for a TAMS grant to extend his existing slatted shed. This will allow for extra calving bays, larger calf creep areas and most importantly, an indoor handling unit and crush.

“There is nothing worse than coming home from work in the dark and having to treat an animal in an outdoor crush in the lashing rain and dark. This new build should finally make all cattle handling a one-person job, safer and more efficient.”

Commenting on suckler farming in Ireland, he said: “No farmer will ever tell you they are getting enough, no matter what their stock make. From what I see, the farmer with the good quality stock will always get well paid. The problem is there are not enough of them.”

“There are too many poor-quality cows being bulled for beef in this country and producing substandard calves.”

“You will not get a beef calf out of a dairy cow, and too many lads believe they can. You are better off with 10 of the best quality cows and calves than 30 or 40 average cows because the market is not there for them.” 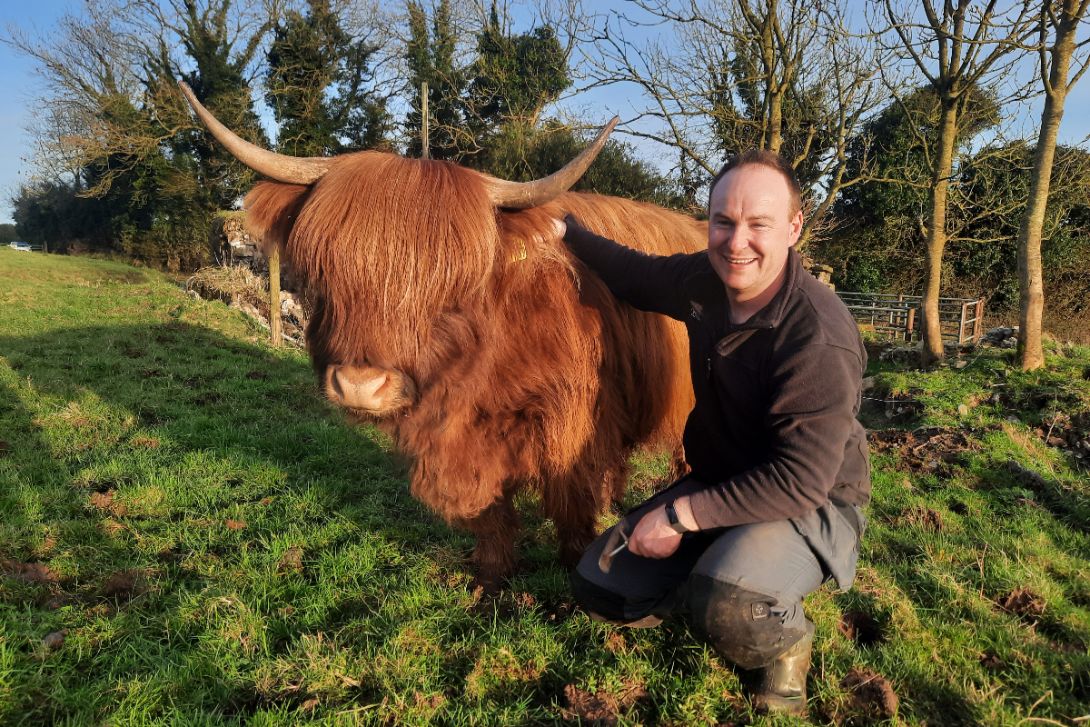 As an educator, Liam, with decades of agricultural experience under his belt, takes pride in sharing his farming knowledge with his students and Instagram followers.

He teaches sixth class in An Grianán N.S, Mount Temple, Co. Westmeath and “always tries to bring a bit of the farm to school every year”.

“Last year, I brought a suck calf to school for the day. The kids learned all about how to care for him; they got to feed him and name him.”
“For a rural school, you would be shocked how many have never been on a farm or even touched a calf! This year, I brought a lamb to school and did the same. The kids loved it!”

“For the last four years, I have hatched chicks and ducklings in the back of the classroom. I would be known around the area as the lad who could land into school with absolutely anything,” Liam laughed. 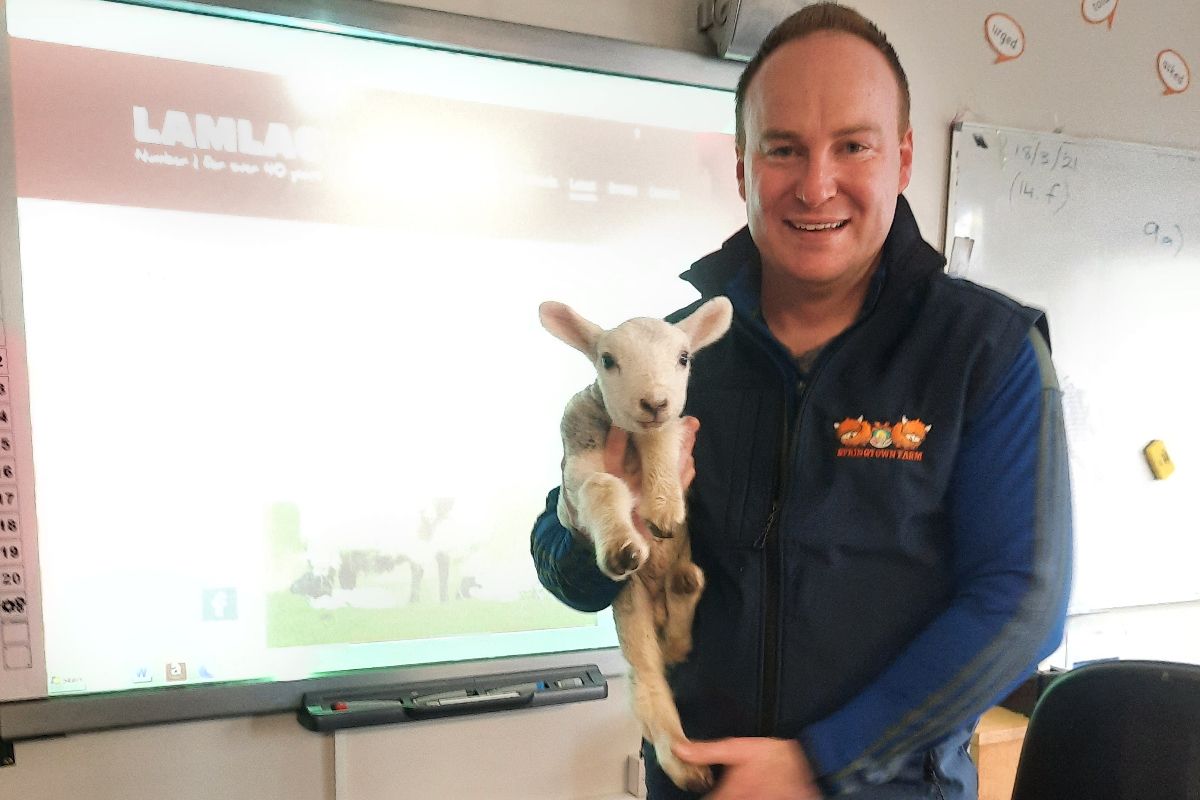 Besides, Liam set up an Instagram page last September to “show people what goes on a beef farm”. He showcases farming in a realistic light, capturing births and deaths, the highs and the lows.

“I also try and throw in a bit of humour, too, for good measure. Like the kids in school, most people in our country have no idea where their food comes from, so we must showcase our industry at every opportunity!”

“Farming is a great way of life. It is a great stress reliever after a day in school. There is nothing better than coming home and getting outside to the animals, but it has to pay. Nobody wants to be a busy fool, and to achieve this, animal quality must be to the fore.” Liam concluded.

Are you involved in suckler farming? To share your story, email – catherina@thatsfarming.com