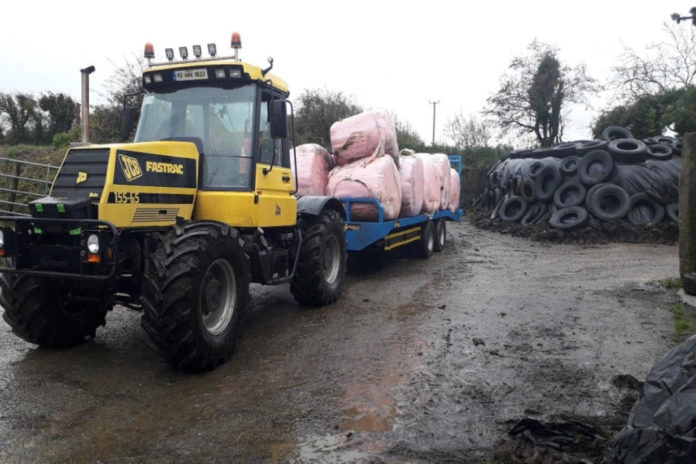 Kyle Power from Co. Waterford is a new entrant to the agricultural contracting game.

The 21-year-old, who previously worked mainly in plant and construction, has recently purchased a selection of machinery to grow his firm.

“I have a 155-65 Fastrac, a low loader, a dump trailer and a 13 tonne JCB digger. I bought the Fastrac and low loader first and was moving a lot of machines and doing some recovery work,” he explained to That’s Farming.

“I was moving bales and things like that as well at the time. I got the dump trailer then and got into the construction side of things, drawing stone and topsoil.”

“Once I bought my own digger, I was able to do a lot of groundwork for private houses.”

When the coronavirus hit Ireland and put almost all construction work to a halt, he decided to move into agricultural work, which was the plan all along anyway.

His first farm jobs were putting in roadways and other infrastructural work and now he has begun to offer more road and fieldwork to potential and existing clients. He recently ordered a new Major 2400-gallon slurry tank with an 8-metre dribble bar.

For the last number of years, the Waterford man has been working for farmers and other contractors in his area and still works as a relief milker.

“It works well when you can go in the morning and milk a herd of cows and then the rest of your day is yours to go contracting.”

He had planned to hire a second tractor for slurry work, as he would need one on an agitator and one on the tank, but the pandemic but a stop to his plans once again.

The Fastrac is perfect for the work that he has at the minute and the 21-year-old said he wouldn’t have anything else.

“For the volume of roadwork that I’m doing, I love the Fastrac. I would never go back to a slower tractor again.”

“The time you make up on the road in unbelievable if you’re doing a lot of roadwork like I am.”

“I know they’re not great in the field because the traction wouldn’t be great but if you’re losing that much grip in a field you probably shouldn’t be spreading slurry.”

Seeing as he has the Fastrac, distance travelled for work doesn’t concern this contractor. He said he will travel anywhere within the southeast region.

“I’m currently serving all of Waterford, South Kilkenny, and would have a lot of work around Carrick-on-Suir.”

“I have yet to travel to New Ross or around those areas but I have no bother travelling for work.”

For such a young man to make this investment into this business, it might be perceived that he either got a hand-out or took a substantial loan to fund it. Kyle explained that this was not the case.

“It did take a lot of investment and people will probably think I took a huge loan out but I had a lot money saved up.”

“I owe very little to the bank, especially in comparison to what other people in this game owe. I’ve put myself in a good position in that sense.”

At the start of the year, the construction industry was good to him and he was getting busier all the time. Although that has now stopped, he’s still satisfied with how much he has grown in the farming world.

“I actually had the slurry tank ordered before all this happened so that was the plan anyway. I’ve done a lot of advertising between DoneDeal, Facebook and handing out business cards and that’s how I’ve gotten most of my business.”

“You could say I’m undercutting lads a small bit to get in but nothing major, only a few euro. If I dropped it too much, I would just be a busy fool really.”

The young contractor is taking every day as it comes and seeing how much his new venture grows over time.

He said he might invest in another slurry tank further down the line but is happy with what he has at the minute.

He has experience previously with both tillage and silage contracting for other firms but cannot see himself delving into that in the future.