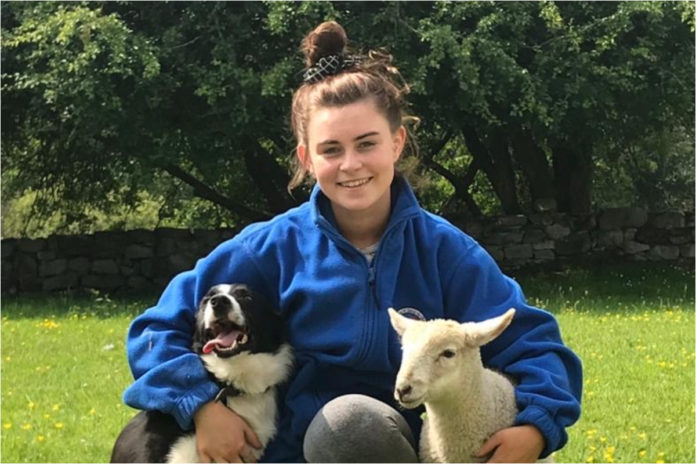 Laura Regan missed out on the course of her dreams – agriculture and environmental management at Mountbellew/G.M.I.T – by 45 points when she sat her Leaving Certificate in 2017.

“After attaining these two certificates, I got accepted into my current dream course. I will be going into my third year of the degree now as my Green Certificate exempts me from having to do second year.” the 21-year-old explained to Catherina Cunnane, editor of That’s Farming.

“I was always discouraged by teachers in primary and secondary school from pursuing my farming interests.”

“This was particularly true in the case of selecting CAO choices for college. I could tell they were disappointed to hear that agricultural science was my first option.” the Rossinver, Co. Leitrim native added.

“I remember someone saying to me ‘you shouldn’t be out doing that work, it’s only for men, a nice cosy job at a desk would suit you far better Laura’.”

Laura recalled the day when she returned home from school and almost let those very words define her future career path.

She reviewed her CAO application and changed her course options to business and marketing degrees, disciplines, which she said she had “zero interest in”.

“Eventually, I came to my senses and realised how wrong they were to push me in a direction like that. They just did not understand the passion I had for everyday life in farming.”

“I come from a family where farming has been a major part of our lives for at least five-generations that I am aware of. The majority of my childhood memories revolve around going to the mart with my father and lambing time.”

Now years later, Laura has extensive agricultural experience under her belt, which is largely attributed to her formal studies and on-farm work.

She assists her grandfather, Aidan, and her father, Brendan, with the running of a hill and lowland sheep enterprise, consisting of 900-head.

They farm a range of breeds including Texels, Suffolks, Blackface Mountains and crossbreds with a mountain ewe being the most common type that can be found amongst the flock.

Her grandfather lambs the hill flock in Leitrim, while Laura and her father tend to their 700-strong lowland flock in both Longford and Westmeath.

“Our farming system is slightly different from others. We lamb all our ewes outdoors starting the last week of March – It is unusual to lamb a large number of ewes outdoors.”

“We also don’t bring any of our lambs to the mart or factories ourselves. We sell them straight off the land which is a lot less hassle for us as hauling over 1,400 lambs to marts and factories would be extremely time-consuming.”

The family retain approximately 100 replacement lambs of their own each year to breed as hoggets. “The most enjoyable aspect of farming in my eyes always has and always will be lambing time. I look forward to it every single year more and more.”

“It’s definitely as exciting as going abroad for me as we stay with family friends in Westmeath for three weeks.”

“The most challenging part of lambing would have to be travelling to and from our fragmented farms in both Longford and Westmeath several times each day for that period to ensure we attend to each ewe lambing in case they need assistance.”

The Leitrim native previously travelled overseas to work on a large-scale dairy and sheep enterprise in February 2019. As part of her level-six course, she completed a 4-month placement on a farm comprising of 325 dairy cows and 600 ewes.

“It was like a farm I’d never seen before as each ewe over there had at least triplets. Twins were rare, triplets were often, and several times we would assist a ewe lambing to find she would even have quintuplets!”

“This was a proper learning curve as I was thrown in at the deep end and having so much responsibility during lambing time.”

“I was petrified of cows before going to England, slowly but surely after milking for a couple of weeks, I started to enjoy them.” added the sheep farmer.

“I’m thinking in the next year or two to go to a different country again and do another lambing season on a wider scale.”

Set to graduate in 2022, Laura relishes the idea of combining her farming endeavours with a career as an agricultural inspector.

“Being outdoors on a farm meeting new people each day and seeing the different ways people farm would be my dream job. My future goal in farming would be to grow our flock of 900 sheep to approximately 2,000 head.”

“My advice to anyone considering pursuing a career in agriculture would be to just go for it. I ignored all my teachers and friend’s advice to not go to an agricultural college and I can’t imagine myself in any other field.”

“It doesn’t seem like work, school or a job when you’re doing something you genuinely love every day,” Laura concluded.