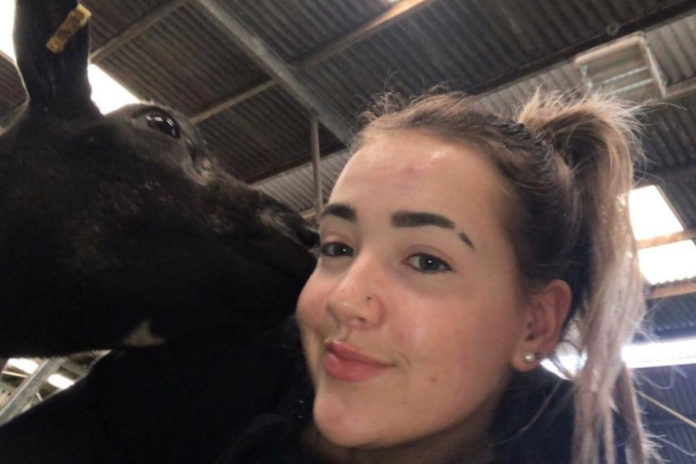 At sixteen years of age, Jennifer Donohoe, Co. Westmeath, is one of Ireland’s most ambitious cattle and sheep breeders.

In 2016, when she was just twelve years of age, she established her own flock of prize-winning Blue Texel sheep, which dominate the pastures with the family’s herd of pedigree Aubrac cattle.

The renowned Johnstown Blue Texel flock, based outside Delvin, was founded with purchases from both Philip Crowe (Powerful Blue Texels) and the Innishmore flock in Co. Fermanagh.

“I was drawn to the breed instantly for their sweetness and sharp heads as well as their carcass quality,” Jennifer told Catherina Cunnane, editor of That’s Farming.

Since its inception in 2016 with 10 breeding ewes, the flock has grown to almost 30 breeding females with a further eight ewe lambs retained.

“This year, we have decided to run just one ram, Cleenagh Dominator, with the ewes after being very impressed with how he bred for us last year.”

“Many farmers are attracted to the breed for their ease of lambing, yet high-quality kill-outs and U and E grading. We are very excited for the future of Blue Texels in Ireland as interest is growing all the time.”

Each year, ram lambs and shearling rams are offered for sale from the prize-winning flock. “This year, we offered our first batch of ewe lambs and had them sold within days.”

“In the future, we hope to introduce new bloodlines and try to improve breeding.” she added.

“My highlight with the blues so far has been the NSBA Championships 2019 where we came home with male champion and overall champion for a home-bred ram lamb, Johnstown Dynamite.”

The flock will offer eight lots for sale at the Irish Blue Texel Sheep Society’s second annual sale tomorrow (Saturday, August 29th) with an online bidding facility available here. A total of 75 lots will come under the hammer at The Showgrounds, Carrick-on-Shannon.

“In preparation for the sale, we had our entries clipped by Ian Donald. This took over an hour per sheep but really shows off the quality of the sheep.”

[The flock’s first entry into the ring will be lot 12, a shearling ewe bred by Powerful Bigbang]

[Lot 33 is Johnstown Emerald Isle, a late February lamb by Powerful Brutus and out of a Whatmore Walnut ewe]

[Lot 34 is Johnstown Emperor, a mid-January lamb by Cleenagh Dominator]

[The final offering is “something a bit special”, lot 35, Johnstown Equaliser, another Powerful Brutus son]

[Lot 59 is next; she is another by Cleenagh Dominator and twin to lot 34]

[Lot 60 is the flock’s final entry into the ring, being the only entry by Johnstown Dynamite]