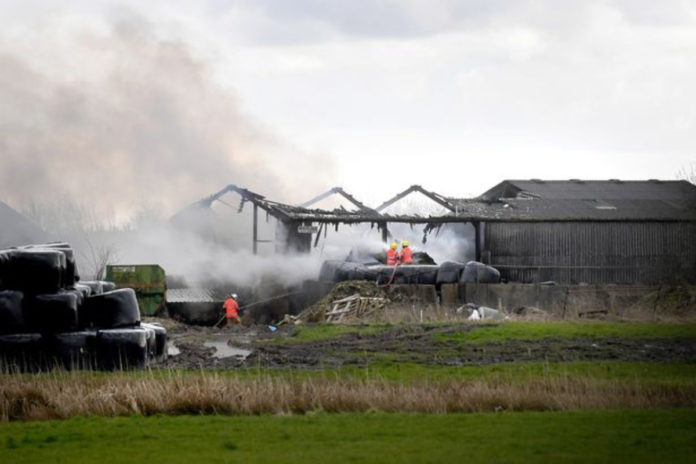 100 tonnes of hay goes up in flames

6 fire engines and 45 firefighters were needed to extinguish a fire at a farm in Manchester over the weekend.

The shed contained a large quantity of hay, but no animals were thought to be involved in the incident, which occurred on Sunday, March 15th, according to the Greater Manchester Fire and Rescue Service.

On arrival, the crew found the barn to be well alight and firefighters used jets to douse the flames.

Greater Manchester Fire and Rescue Service area manager, Ben Levy, told Manchester Evening News (MEN) that the fire is believed to have started inside a barn, which was stacked tightly with around 100 tonnes of hay. The shed is around 30 metres by 30 metres in size.

“We got the first report of a fire at around 1.45 pm this afternoon. We had about 10 emergency calls to that fire. We sent the emergency fire engines to the scene, which then sent for assistance from other fire stations.” Lely explained to the publication.

“At the fire’s peak, there were six fire engines and a number of support vehicles dealing with a barn with approximately 100 tonnes of hay well alight. It is very difficult to put out a hay fire and it was stacked quite tightly. It will burn deep inside.”

A team of firefighters remained in Rosemary Lane overnight.

Mr Levy says a fire investigation is underway to establish the cause of the blaze.