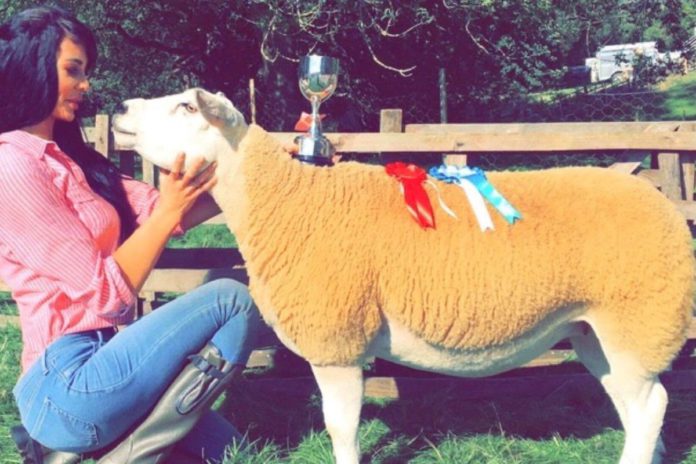 In this week’s Women in Ag segment, That’s Farming, speaks to breeder, Leah Dewhirst about her 60-strong Low Garth flock of Kerry Hill and Texel sheep and exhibiting and judging at agricultural shows.

31-year-old Leah Dewhirst, a multi-award-winning Kerry Hill and Texel sheep breeder is a powerful force to be reckoned with.

Although some of the North Yorkshire native’s family members have a long-standing association with pedigree Texels, her ovine passion developed only in recent years.

She has spent the last five years establishing and fine-tuning her renowned 60-strong pedigree registered Texel and Kerry Hill flock. Leah has also studied sheep medicine with FarmSkills and completed other courses with veterinary centres in AI and genetics in that space of time.

She told That’s Farming: “I remember growing up with sheep around me and had little interest in them. The spark started when I got a taste for showing. I started helping my parents prepare the sheep for some local shows, and then that is when the bug got me.”

“Since then, I have developed my own flock of registered pedigree, performance-recorded stock. Furthermore, I have won multiple championships and have sold my stock in England, Scotland, Ireland, and Wales.”

“I am an active member of the Texel Society and the Kerry Hill Flock Book Society. I was recently featured a few months ago on Channel 5’s ‘This Week on The Farm’ – selling one of my Kerry Hill rams.”

“My whole life revolves around my passion for livestock. There is nothing else I would rather be doing. The feeling of breeding your own stock, showing, and promoting is fantastic.” 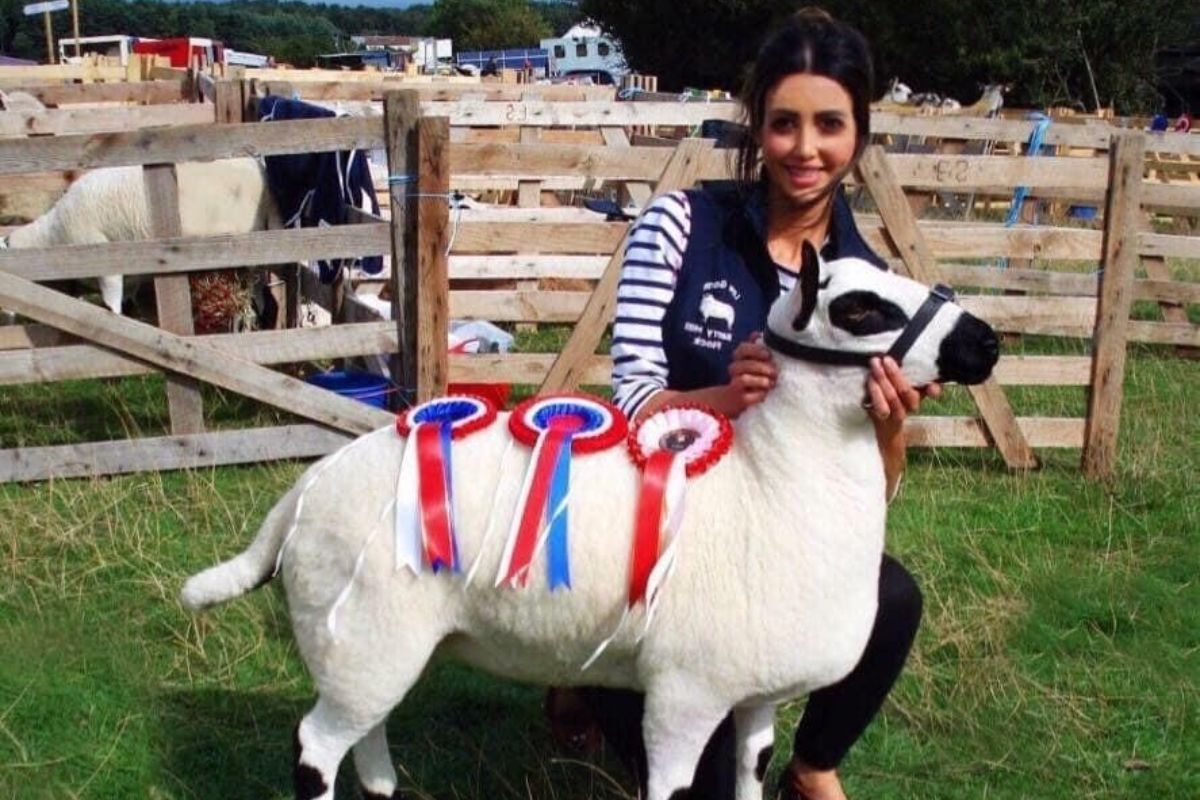 Leah’s sheep breeding venture began in 2016 with the initial purchase of two Kerry Hill breeding ewes from a prize-winning neighbouring farmer and one Texel shearling ewe from the Carlisle Christmas Stars Sale.

She wanted to “start with the best of the best, even if it meant spending a great deal of money”.
“It turned out to be the best thing I ever did because two years later, I still have those original ewes. So, they are still breeding for me, and I have granddaughters and great-granddaughters within the flock, which I think is wonderful.”

“I can trace most of my flock back to those foundation ewes, and although I have bought in the odd sheep since then, I try to keep a generally closed flock, only buying in from society sales.”

The part-time farmer now has over 60 breeding ewes and focuses on excellent bloodlines and high-performance genetics whilst contract lambing/shepherding for other breeders. 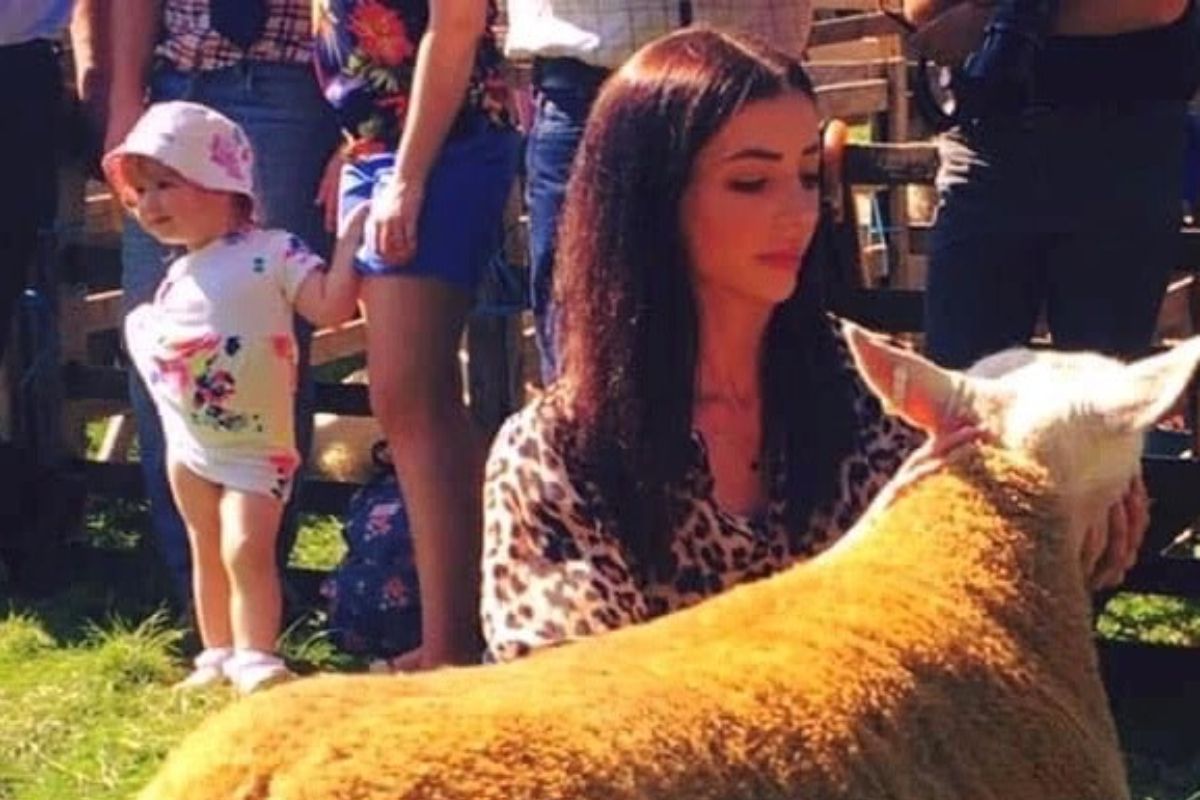 Her primary objective is to improve her flock’s genetic merit through selective purchases, superior genetics, and ET work. Her most recent acquisition came in the form of a Milnbank ewe from Robbie Wilson, which she believes will help her flock reach new heights.

“The 14-hour round drive to Aberdeenshire was well worth it. I plan to flush her this year for ET work, alongside my two other best Texel ewes. I retain some of my ewe lambs back for breeding – depending on numbers and bloodlines.”

Along with increasing ewe numbers, Leah is in the process of expanding her farm holding. Currently,  she grazes her flock across 50-acres between her family’s and her own land in neighbouring villages.

She is in the process of acquiring an additional 45-acres, and a lambing shed, which will house 100+ sheep for the 2022 lambing season.

“That is very convenient when your partner is a builder. Dan and I met just under one year ago, and likewise, he came from a non-farming background. It seemed that I gave him the ‘sheep’ bug.”

“Where I was once usually running all my sheep on my own, he was now beside me helping me every day since. I felt like a weight had been lifted.”

“We spent every day amongst the sheep, moving, worming, dosing, foot trimming and undertaking trips to sales. Finally, he decided he wanted to have a few of his own and chose Suffolks. I bought him his first Suffolk as a gift in 2020 – a beautiful Limestone gimmer lamb from the renowned Mark Priestley in Northern Ireland,” Leah added. 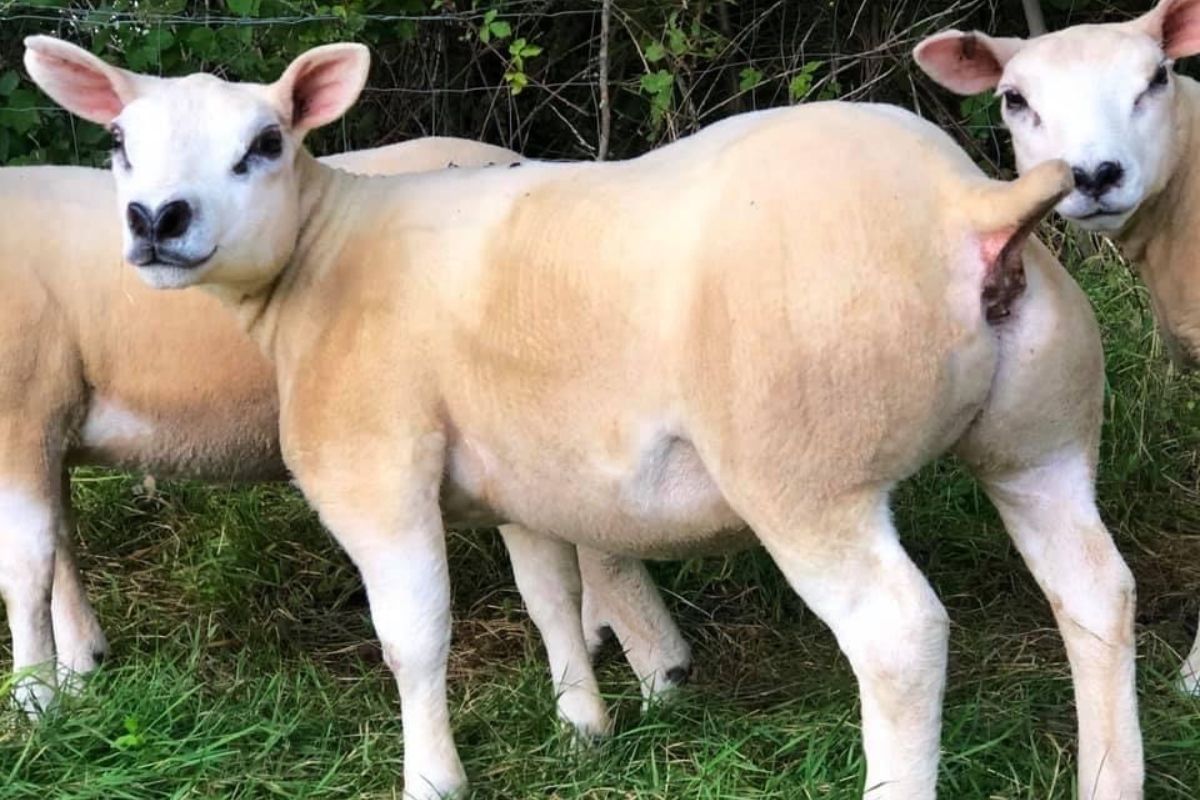 A show exhibitor and judge

As alluded to earlier, the 31-year-old is an enthusiast show exhibitor and, before the pandemic struck, attended up to twenty agricultural shows annually.

“I love preparing them, spending hours upon hours, washing, carding, blooming the wool. It is something that comes naturally to me, and I can never tire of it. The excitement of turning up on show day is like no other.”

In recent years, she has officiated as a judge for Texel or rare breed sheep classes at agricultural shows. “It is great to be on the other side of it for a day. And, it is always a great day out, meeting new and enthusiastic breeders showcasing their stock,” 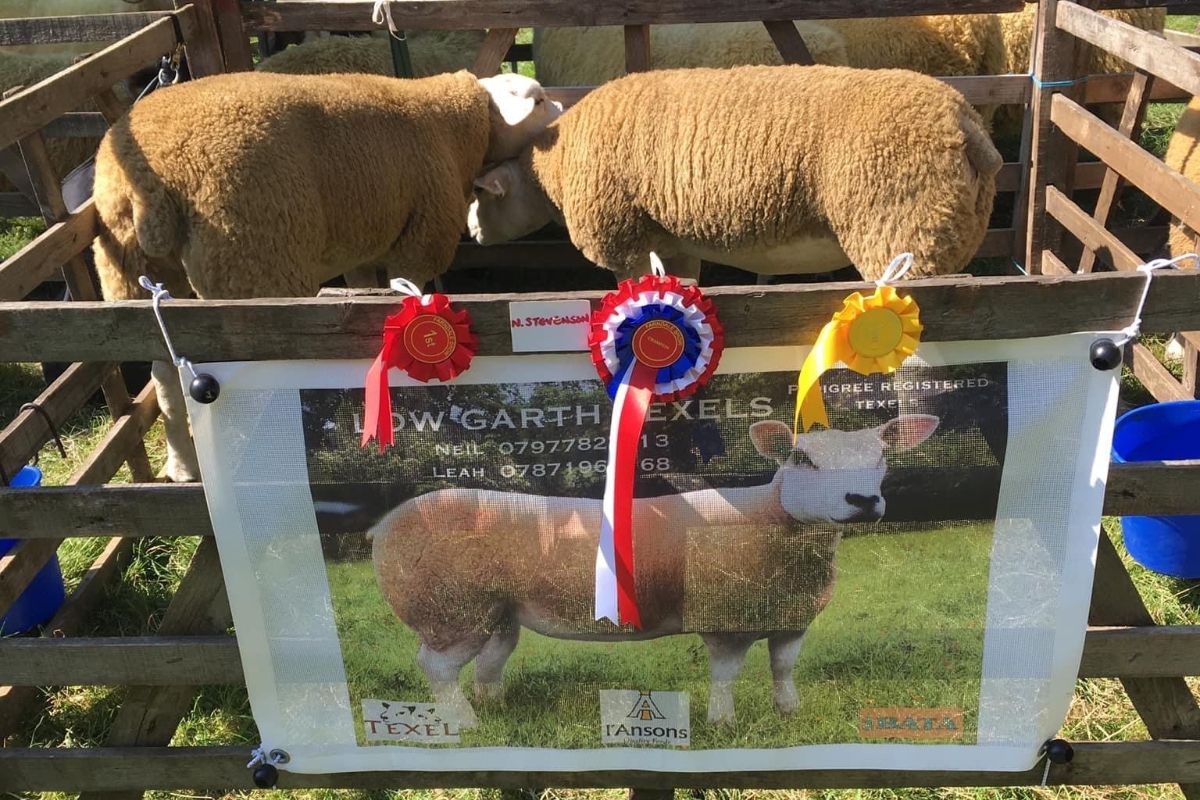 “I remember only even five years ago, hardly any women showed sheep. I was used to the few ‘odd’ looks, especially when you do not fit the mould as to what people assume ‘a woman in farming’ should look like. Then you shock them when you know every ovine disease known to veterinary science – and – how to treat it.”

“I am a big believer in supporting women, and more women than ever now have an interest. Some of the most fantastic shepherdesses are from non-farming backgrounds. It is just proof that being born into it sometimes means nothing as to how far you can go.”

“I have always been determined and worked every hour given to achieve what I have. However, a lot of heartache goes on behind the scenes that no one sees that knocks you back a few steps, such as losing stock, the extreme exhaustion and feeling isolated from the world at lambing time, or in fact, any time of the year.”

“Farming is a lonely world. You become so engrossed in your ‘bubble’, your animals; you sometimes can lose touch with the normal world.”

“Small hands, patience, clever imaginations and natural maternal instinct are all positive attributes that we women hold, and all go in our favour, especially at lambing time,” she added. 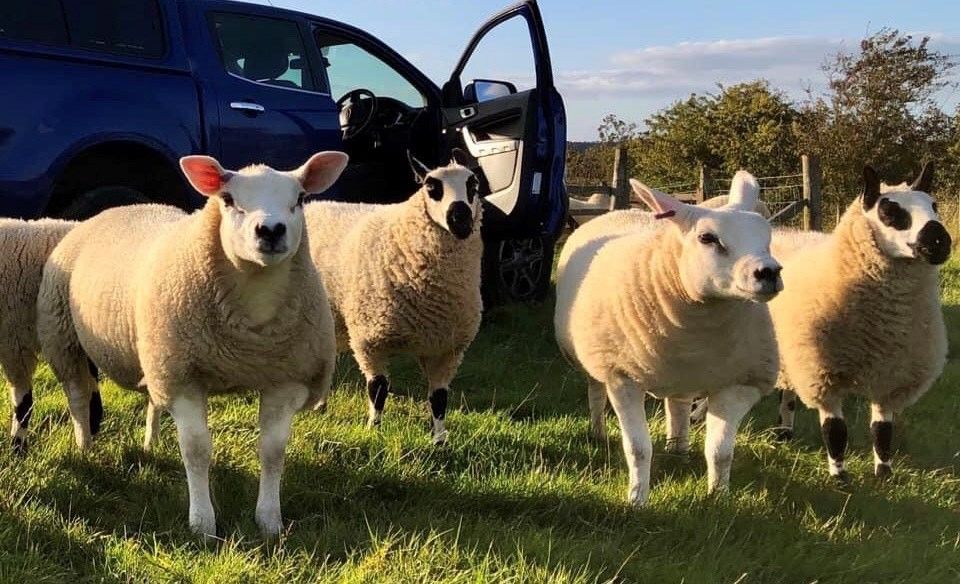 Reflecting on her journey, the sheep breeder said: “It has been a hard road. The hardest part was feeling the drag back from succeeding only because I am a woman.”

“However, that has been excellent because it has made me want to succeed 100 times more to prove people wrong. I would not have got to where I was now if it were not for that.”

“The current views in the way women are perceived in agriculture is indeed changing, and it is getting better. That makes me happy.”

And with that in mind, Leah intends to keep breaking through grass ceilings, expanding numbers further, focusing on “superior quality and exquisite breeding”.

Are you a sheep breeder? To share your story, email – [email protected]