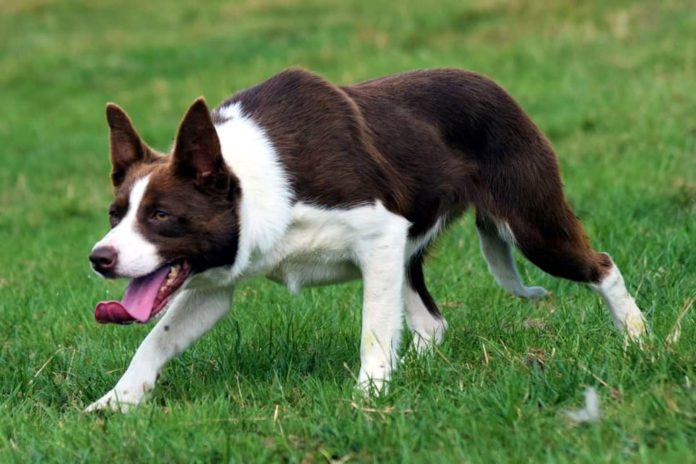 Just under €18,000 for bitch at online work sheepdog sale

Welshman Dewi Jenkins, of Talybont, near Aberystwyth, reclaimed the bragging rights when finishing top of the price board.

The Ceredigion breeder and triallist headed the chasing pack on price by a wide margin with his rising two-year-old red and white bitch, Tynygraig Queen, by fellow North Wales dog trainer, Sion Jones’ Shep, out of Graylees Dollar, earlier sold by Mr Jenkins to Frank Hickson.

The home-bred Queen is a half-sister to Kim. The 12-month-old bitch set a new world record price of more than £27,000 for Mr Jenkins at a Welsh sale earlier this year.

With such” illustrious” bloodlines, the dog created “tremendous” online interest, before falling to an undisclosed Scottish buyer.

Kevin Evans stood next best on price at £9,800 with his 15-month-old fully broken black, white, and mottled bitch, Kemi Bella.

She is yet another daughter of his European Nursery and Royal Welsh champion, Tanhill Glen. The stud dog has had a “major” influence on past leading price achievers at the North Yorkshire venue.

Bella, like several other past Skipton-sold dogs from the Evans camp, found a new home across the waters with American buyer Daniel Hayes, of Los Altos in Santa Clara County, California.

The entry is by his own Spot, out of Northumberland-based Michelle Anderson’s Dunelle Nell, whose own dam, Henna, sold for £20,000 last year.  Shell scooped a £2,000 selling price when joining Marshay Farms, of Tiverton in Devon.Top of Form

He secured this with a 16-week-old red and white dog, Highhills Jonny, also by his son’s red Spot, out of J Elkin’s Glen, whose own dam is by Gerald Lewis’ Glen, a full brother of red Don sold last year for £14,100.

This young, up-and-coming dog also found a new home in the USA with Samantha Furman, of Frontrunner Border Collies in Virginia.

“For a change, part-broken and unbroken dogs were in the ascendancy when making up the bulk of the 66-strong entry, which featured just 16 fully broken dogs, all in ready demand.”

A brace of the latter among the first five to be offered for sale online both made £4,000.

First up and again from Wales was Cefneithen Tess, an October-2019, black and white bitch from Mrs T Thompson, of Tawelfan in Carmarthenshire.

The second £4,000 sale fell to Ireland and Cornelius McLaughlin from Clonmany in County Donegal.

Five dogs made £3,000 or more, to a top of £3,400 for a part-broken May-2020, black and white Scottish bitch, Dot, from Strathaven’s James Campbell, which will go to work on the Isle of Harris in the Outer Hebrides with Alisdair MacDonald.

Making £3,100 was Llwynsarn Celt, a November- 2019, black and white dog from another Welsh trialling legend, Aled Owen, of Penyfed in Denbighshire.

Mr Owen also made £3,000 with a younger, though fully broken seven-month-old Llangwm Cap son, Mainstay Ben, out of SR Morgan’s Middery Kim, which found a new home in Bishop Auckland with the Fenwick family.

Flying the flag for the English were two £3,000 performers. First up was the August- 2017, black and white fully broken bitch, Denwyn Fiz, from David Cole, of Bittaford in Devon.

By Sergio Perello’s Jim, out of J Rees-Denman’s Denwyn Seren, Fiz heads north of the border to Robert McClements in Dumfries.

The second £3,000 dog and hailing from the Derbyshire Peak District was a March- 2019, part-broken black and white bitch, Bet, from Muggington’s Matt Tomlinson, who heads to York and new owner, Rachel Page-Murdoch.

“With a wide-ranging offering of ages and abilities, Skipton’s latest sale again presented a varied cross-section of readily affordable dogs, both solid broken entries for work and up-and-coming youngsters to further bring on and run in trials.”