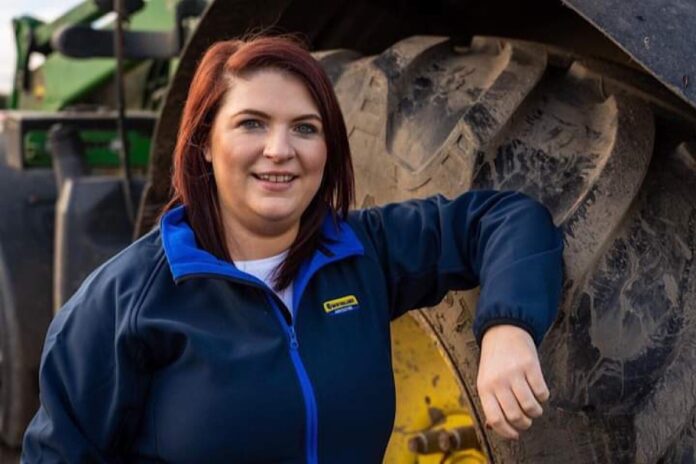 ‘I have been driving tractors since I was 16’ – ag contractor

An interview with O’Donoghue Agri

“There is nothing like being out in a green open field; you can forget about your worries.”

These are the words of Karen O’Donoghue, from Croom, County Limerick, who works as an operator in her father, Michael’s, agricultural contracting business, O’Donoghue Agri.

In 1976, her father established the firm when he saw an opening for a baling service in his area. He invested in a Massey Ferguson 165 tractor and a Bamford square baler.

In the 1980s, he decided to expand into pit silage and acquired a JF trailed harvester to match work volumes.

In the early 1990s, he purchased his first self-propelled harvester, a New Holland 1900.

“My father was a secondary school teacher and had three months off in the summer. That was when he had started baling and things like that. He retired 14-15 years ago, and that was when he decided to invest more into the business.”

“In the mid-1990s, my eldest brother, Michael, started working with my father first, and I, my sister, Claire, and my brother always worked there for the summer when we were in school and college.”

“In 2009, my brother, Gerard, joined my father. He was working full-time and came on with my father, and he has been there since.”

“The three of them had built up business even further. My sister and I mostly help during the summer, but we could be on call for weekends,” added Karen, mother to Clodagh, 18-months-old.

“My two brothers are much older than me. I saw them driving first, and I was always out with them when I was younger.”

“I got my licence when I was 16, and I have been working with my father every summer since.”

In 2011, Karen graduated from UL with a four-year Bachelor in Business degree. She worked for O’Brien Cahill, Mallow, for three-and-a-half years (2012- 2016) for her placement.

She is currently a full-time chartered accountant with Northern Trust, Limerick. 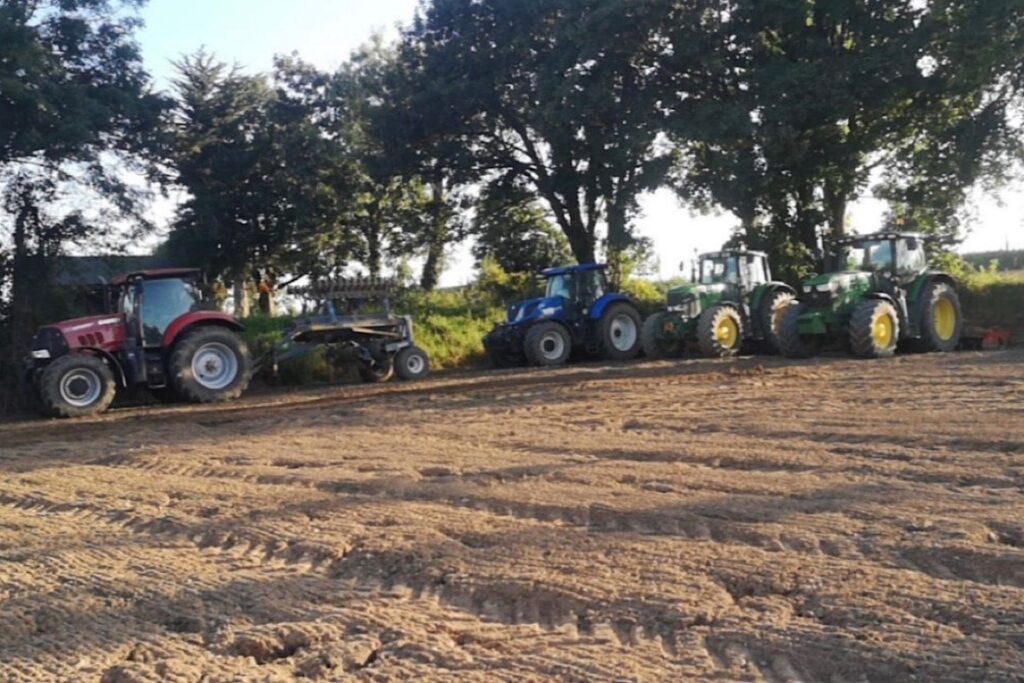 Donoghue Agri serves a 20-mile radius of Banogue and built up its customer base through word of mouth.

Michael’s job as a secondary school teacher two miles away from the yard contributed to the customer base with his surname widely known around the locality.

The family hires one employee for ten months of the year and up to six workers for peak times.

Michael’s wife, Margie, looks after the catering aspect of the business and is on hand to help. e.g., parts delivery.

“The family would be well-known, and my father comes from a big family and then the fact that we work as part of a team as well, so maybe that draws us back for more business.”

“I suppose if you do a good job, customers are willing to get you back. Also, it is handy for clients that we provide all the services. We are like a one-stop-shop.”

“We are surrounded by a lot of agricultural contractors where we live. So, we have noticed there would be a lot of competition price-wise in the last few years.”

“You have customers you know that you will have next year, but there would be a few iffy customers that you do not know.”

“We have a lot of repeat customers. So, that is great for us too because we know the running of the land, and a farmer is comfortable with us because we know what we are doing and things like that. So, it is positive from both parties.”

Changing from pit silage to bales

“We are noticing some farmers are changing from pit silage to all bales, even though in my view, if you have a lot of acres, pit silage is cheaper.”

“However, I do not know if they find it handier for the bales when you are only opening one at a time rather than opening a pit of silage.” 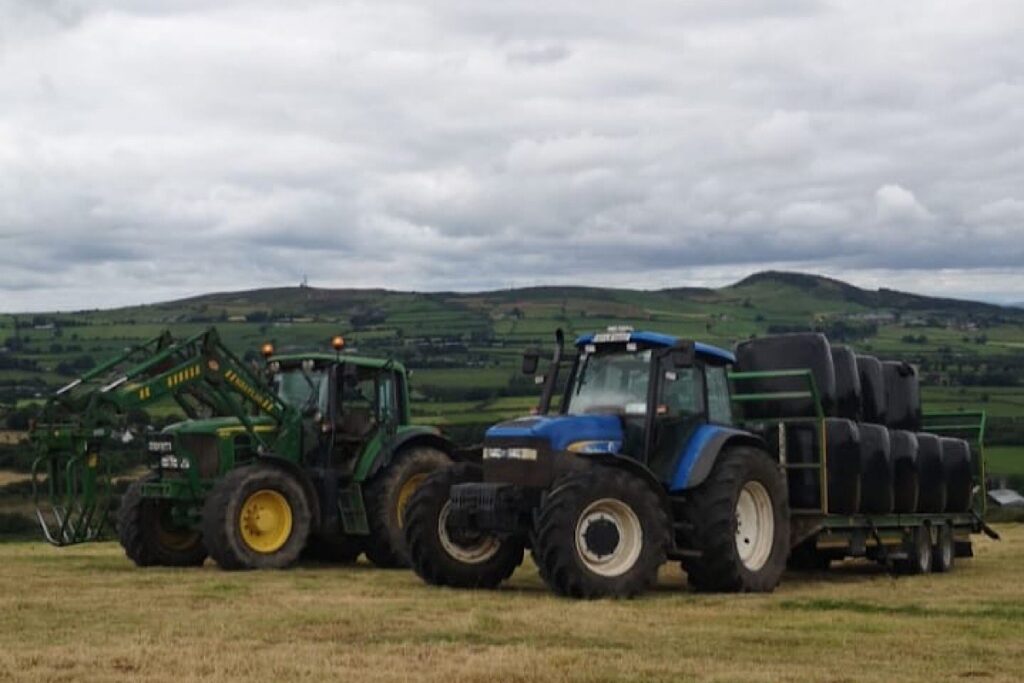 “My family do a lot of the mechanics in-house and do a lot of the servicing themselves of the tractors. We have a mechanic in the locality when it comes to breakdowns, and he gives us a hand.”

The slurry and dung equipment include a HiSpec 3000 TD-S tanker (with a trailing shoe), an Abbey 2500R Slurry Tank, a Cross agitator and a Lowlander Mk4 – 120 – GT Bunning rear discharge dung spreader.

Other items include a 6m Dalbo ring roller, a 3mtr Mandam mounted disc harrow, an Amazone 2.5T fertiliser spreader, a JPM tandem-axle low loader, a mulcher, and a Unigreen sprayer. 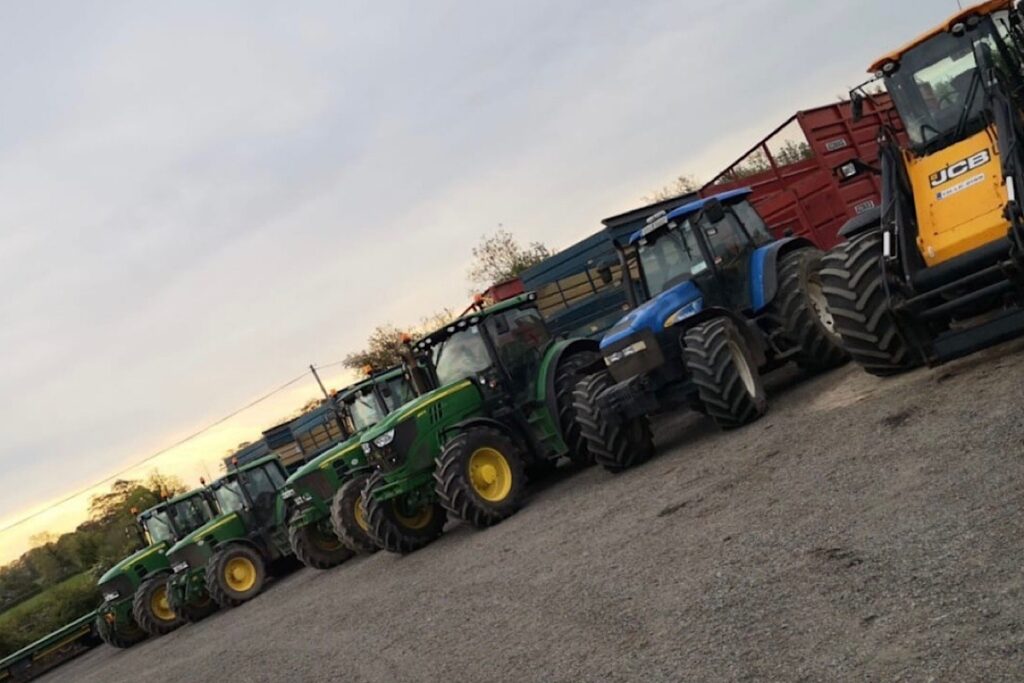 Diesel prices, fertiliser prices, insurance costs, the introduction of the carbon tax, recruiting “trained employees”, and machine breakdowns are some of the challenges that impact O’Donoghue Agri.

“I think we are going to be facing an awful season this year with diesel and fertiliser prices. It is very hard for the farmers.”

“We do not know what way it is going to go. Farmers will depend more on slurry, which is good for us for in that way as we will get work.”

“Fertiliser prices have gone over double since last year, but then, if we have to increase our prices, can we forward them to farmers? They are in enough of a predicament already with costs.”

“It is going to be a tricky one, especially with diesel prices. The harvester could take over 1,000 litres of diesel, and that might not even get you through the day. Some diesel companies are capping the amount you can get.”

“We paid 70c/L last year whereas now diesel is gone up to €1.30 c/L; that is nearly double. So, it is costly enough to run these machines without having further increases.”

“The government were on about reducing it by 2c. However, I do not think that is going to make an awful lot of difference.”

“We are being crippled on carbon tax as well. Farmers can claim back carbon tax, if they are registered for VAT, but agricultural contractors cannot. We have no rebate there, so it is going to be tough.” 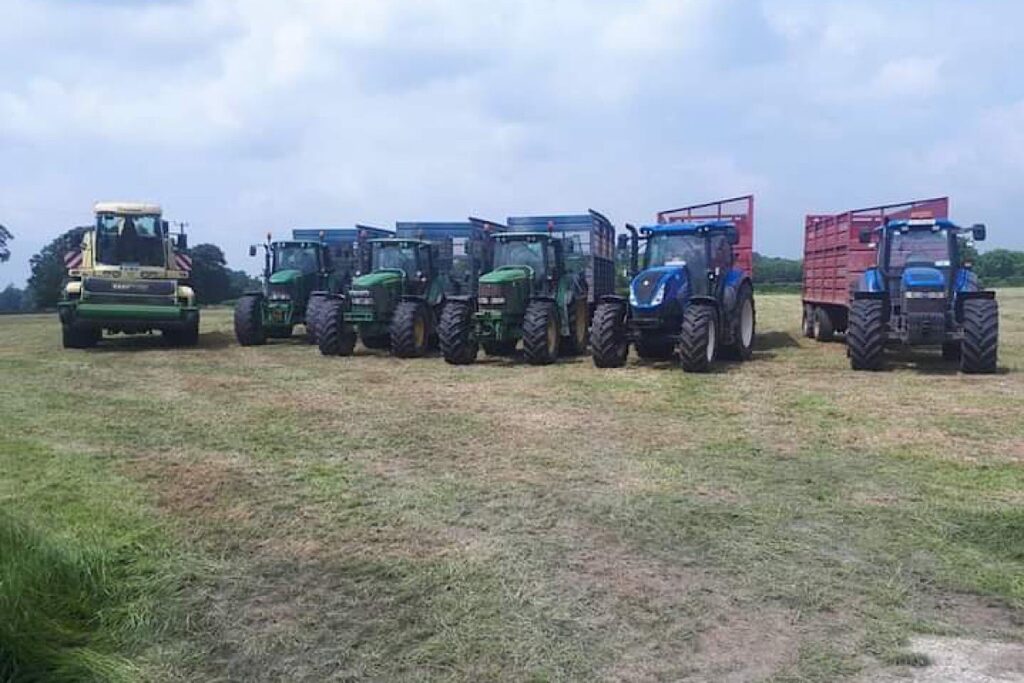 Karen feels it is getting much easier to become involved in the sector as a woman.

“However, my sister was probably one of the first women around the area years ago to be driving a tractor.”

“It was a kind of a shock to see a woman driving a tractor, and then when I came along, you would not too often see two sisters driving tractors as well. So, you would get an awful lot of looks and stares.”

“I remember a few farmers sniggering, saying, oh, she will not be able to do that or whatever. You have to stand up for yourself. I have been driving tractors since I was 16.”

“I even look around my local area now. More farmer’s daughters are getting involved in farming, and more women are driving tractors.”

“In my opinion, I do not think your gender should define what job you have or what hobby you are interested in. But I definitely think times are changing.”

“However, there is obviously not still the number of women as there are men.”

“I know it is a very physical job, as in labour-intensive. But, we have been doing it for years, and we do not know any different. I think times are changing, so hopefully, more women get involved because it is great to see it.”

Karen believes the key elements of running a successful agricultural contracting business are your “quality” of service, updating machinery, being “level-headed and fair” in your decisions, and focusing on health and safety (from an employee’s perspective).

“In my opinion, agricultural contracting would be a tough game for anyone to get into who is starting.”

Business plans and the future of agricultural contracting

In five years, Karen aims to work full-time in the family business in an administrative role with her sister, Claire, and continue as an operator in the business.

“I always think there will be a need for an agricultural contractor and a need for advice and for someone to ring up to see what you think of this, or like do you think I should reseed this field.”

“Some farmers have their own equipment, but they do not have the time. I see it myself, too, as my partner, Thomas, is a dairy farmer, and there is always something to be done.”

“I do not think agricultural contractors get the recognition. They should get recognition.”

“I would say to someone if they do not know what the agricultural contracting business is about, I would like to invite you down to Limerick for the last few weeks in May and the first few weeks in June because you would not be seen from six in the morning to whatever time at night and if the weather is going to break, it is hard going.”

“You have to have the interest in agricultural contracting, but I definitely think it is needed for farmers,” she concluded.

- Advertisement -
Previous articleBeef trade: The only way is up for prices?
Next articlePlainer cattle ‘more difficult to get away’ – Candler