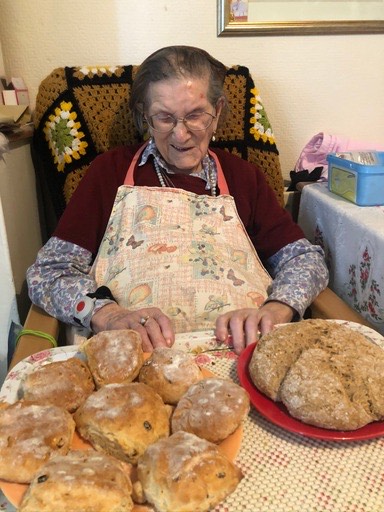 Nancy Stewart, (107) from Clonard, Co. Meath is the oldest woman in Ireland, who stills lives independently in her own home.

She is currently cocooning with her granddaughter, Louise Coghlan, from Broadford, who works for Third Age in Summerhill.

“She raised six children; sadly, her twins have died. Margaret died of motor neurone disease, and Ann died of a broken heart. Olive, Kathleen, and Mary live nearby, and her son is Finian. Her father died early in life, and her mam took over the post office.” Louise, granddaughter of Nancy Stewart told That’s Farming. 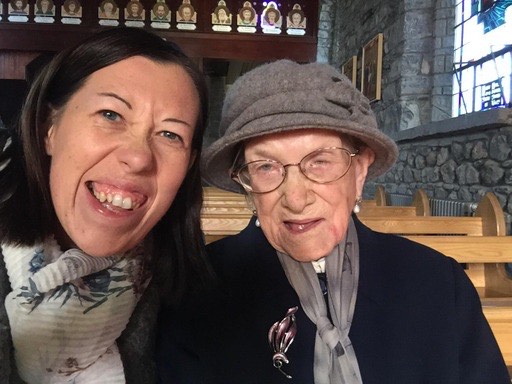 Nancy has dealt with the 1918 Spanish flu, 1919 War of Independence and most recently, the COVID-19 pandemic.

Last year, she wrote a letter of hope during the summer and ended the year writing with a letter of light. Both letters sent out positive messaging in a difficult time.

“She is a woman of faith and very humble; she loves saying her prayers and saying the rosary; it has helped her.”

They have come up with a novel idea of viewing mass in 32 counties and aim to have each area covered by February in their virtual red car. The first of three masses begin at 7:15 am daily online; Nancy always has her beloved cup of tea and a snack during mass.

“The cup of tea is vitally important; it is nearly as important as the mass. We have a bit of laugh, I say have you got the sandwiches, and she says have you got the tea. It is amazing how fast you can get to Galway these days, 2.4 seconds.” she laughed.

Nancy has been fortunate to have received an invitation and greeting to the Irish College of Rome from Fr John Coughlan, where she is going to attend in February.  Other invitations include St Barnabas New York, New Jersey, England, and Scotland

She is a dedicated Trocaire collector with a passion for the homeless. When she was growing up, everyone had a place to live. She believes that the funds available today should not be sufficient.

“She strongly believes that everyone deserves a home and is very disappointed when she hears about the homeless people and children in this country that do not have a safe refugee.” 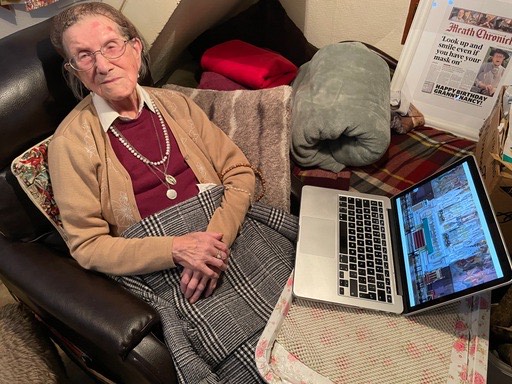 Nancy Stewart believes that food, faith, not worrying and kindness are the secrets to living a long and healthy life. Her diet comprises a traditional Irish breakfast, followed by a substantial traditional dinner with potatoes, vegetables, meat, and a rice pudding dessert.

“She has a fry or an egg in a mug and loves tea. We drink tea until the cow comes home. We are keeping Barrys in production in this house.” Louise laughed.

Nancy recalls tea ration, where she would have to swap her brown soda bread to a woman down the road to get the tea.

“The Living and laughing with Lou Facebook page was established to tell others that everything is ok and the similarities between Nancy and me. She is very much of a yes woman; I can’t remember her saying no, so we are very similar.” 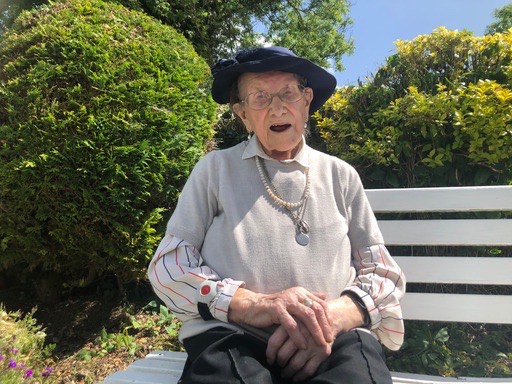 Louise moved in with Nancy as the Covid-19 pandemic emerged. “I was only happy to do so, and I know I will never regret this time. It is very special to have someone that you love.”

“I hope we can both make it out of this Covid-19 and please god we will be able to go to mass and do what she might like to do.”

“Nancy has been missing her immediate family, grandchildren and nephews, nieces, and friends; her dream would be to meet those people, and have cups of tea with them.”

“She also would like to visit the church or go to the local shops, but she is a very home person. Her house was like a train before this; you wouldn’t have got a seat inside it.” Louise concluded.