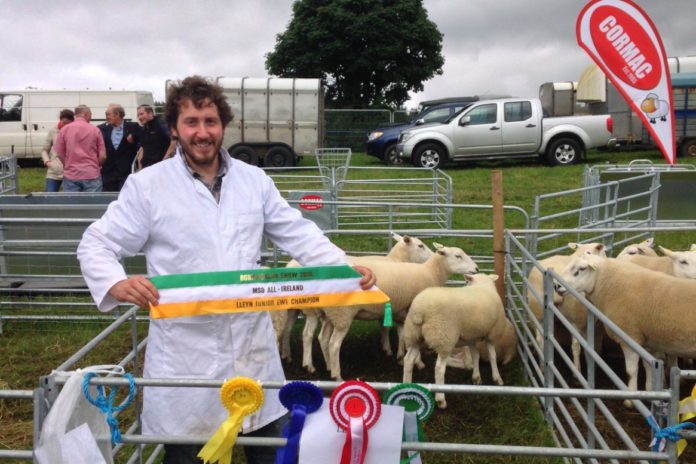 In his early 30s, David, Ballinagh, County Cavan, took ownership of the farm from his uncle, who acquired a 30-year lease. His father-in-law, Robbie McDermott, works the land on weekends.

David’s late father farmed the land running a dairy, beef, and sheep enterprise up until his death in 1991. The farm spans 120-acres in size and is split between four different parcels.

“We used to keep 40 ewes for grazing paddocks after dairy cows. One part I always remembered was lambing; I always enjoyed the lambing aspect,” David Beattie explained to That’s Farming.

“Moreover, I was my father’s right-hand man. I loved farming, and when I was asked as a child what I wanted to be, it was always a farmer.”

“When I was going through school and studying agricultural engineering at Harper Adams University, farming was on the backburner. However, it was always in the back of my mind.”

“When I settled down and was getting married in 2014, it just suited to start farming. It was always something I had planned to do, probably a little later than I planned, but it is going well.”

Due to land fragmentation, he found expansion to be an option and could go up to a 500-ewe flock (but not time-wise).

“300 ewes are my cut-off point. I find this number is manageable for me. Assuming you have 1.8, you will 250 ewe lambs at the end of the year and can run them all on as hoggets.”

David strives to breed a sheep with strong maternal traits that is hardy, and has good feet, tight skin, tight wool, and power. He and other sheep breeders have been striving to focus on size without compromising their maternal characteristics.

He stumbled across an article in a newspaper while renovating the existing farmhouse with his then, fiancée. It read, “profitability in sheep farming depends on the number of lambs you had to sell at the end of the year.”

It brought him to look at prolific sheep on the societies website, where he stumbled across farmer profiles similar to his farming operation of big numbers and in a part-time position.

Having reviewed his first year of lambing with many newborn lambs and little work involved, he decided to stick with the unique breed.

“I needed a sheep that was going to let me work in the workshop but leave a profit at the end of the year. I still wanted time for family, that I was not working crazy hours and seven days a week.”

“The Lleyn breed suits me because they are hardier and prolific sheep that will have plenty of lambs.”

“There is something wrong if I am not weaning 1.8 lambs per ewe. That leaves me with many extra lambs compared to your average sheep.”

“I have prolific sheep with less work which is the reason I picked them. There is little or no feet trouble, plenty of milk to rear two lambs, and they are easy to handle.”

“When I started breeding sheep, I did not have much fencing and facilities for handling the. However, they are a relatively quiet breed of sheep.”

Lambing indoors commences the last week of March to the third week in April due to grass availability.

In 2019, David invested in a TAMS II-approved shed from a lean-to shed. He houses sheep in this shed 10 days before they are due to lamb assisted by a PTZ camera.

“When I was building up the flock, I always ran a certain percentage of ewe lambs in-lamb. I found it a long time to be looking at the ewe lambs to keep them as hoggets with nothing to show for them.”

David lambs during this period as from his experience trialling one batch in February the sheep that lambed a month later he found very difficult to locate at weaning time.

“This stunned me, so I made a decision; it is a system I want to run as much I can go on grass. The only time you will have this is after St Patrick’s Day. After that, you have much more cover on the field, and the 2-3 weeks the sheep are out with lambs.”

David finds indoor lambing is a better option. He completed outdoor lambing one year and felt the workload increased due to tagging and ringing as part of the Sheep Ireland programme.

“I found it left more work lambing them outside than the system I operate now,” the Lleyn breeder remarked.

“For one person to lamb 300 ewes and have them to compact, had severe weather come, I would not have many lambing pens. So, I could be getting away with 8-10 pens for the whole flock for a few problem cases, e.g. fostering.”

“For me, to lamb down a big number of sheep and not have the facilities to put them out to grass would bring many headaches.” 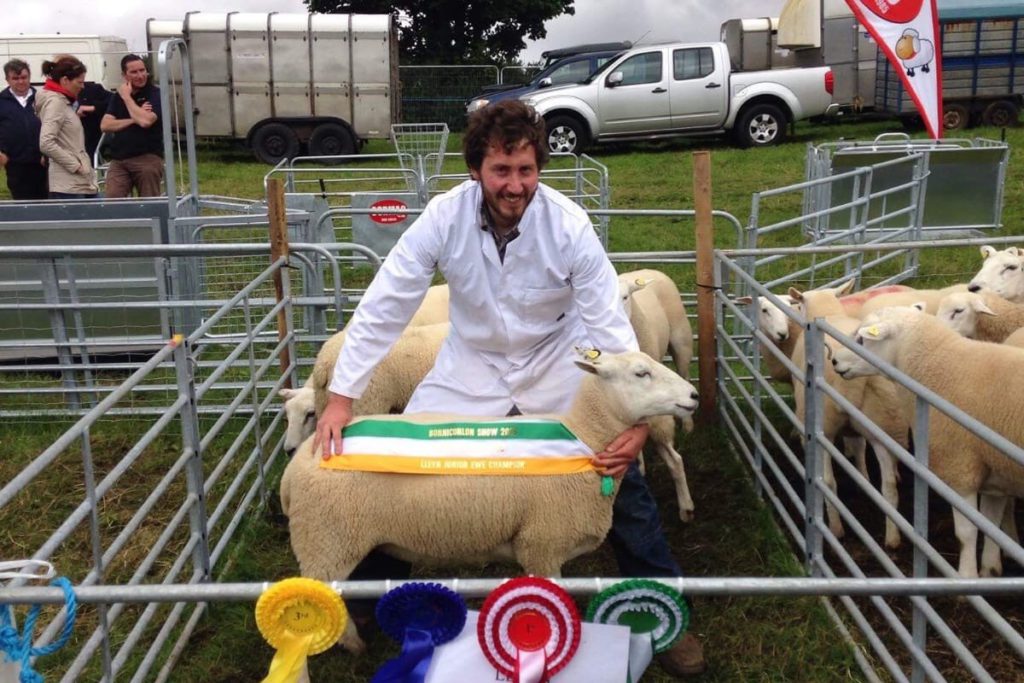 The Cavan native retains ewe lambs, while he finishes some ram lambs off a grass-based diet and retains others as breeding rams. Five ram lambs went to Lambay Island via boat, for €500.

“Ram lambs might be slower to finish as a maternal breed. However, they need that extra month on grass, and you will get them away to the factory. It is a price worth well paying for the exceptional females you are breeding.”

The flock sold 34 lambs through Carnaross Mart in August and 106 on-farm during the month.

“There was a good trade. My pen of five hoggets won 4th prize in the show. I had not expected to be a contender.”

“It helped the trade too. I got €270/head for each of the pens of five hoggets, and that was the third-highest price. After that, I got €240/head for the subsequent few batches.”

“I got €210/head for some of my lesser-priced hoggets, but it was still good money.”

His successes include 1st prize all-Ireland hogget at Bonniconlon Show and €660 at the Kilkenny Sheep Ireland multi-breed €urostar sale for a ram bought by Hillsborough Research Centre.

Other successes include selling two rams last year for €880 and €860 at Roscommon Mart.

David also bought the top-priced ram, Quarrymount Jupiter, for €1140, at Roscommon Mart, from Ryan Matthews out of his Kennedy’s ram.

In the past, he sourced rams from Scotland, England, and Carlisle.

Based on Sheep Ireland data, his ram, Hamish Goldies, he acquired from Scotland for £1,000, stands out as he produced 600 live lambs – before his death.

He lets ram out on October 24th for one month with a few stragglers after that period.

He outlined that this issue occurred as a result of playing rugby in his youth. However, when he retired from rugby and began farming and continuing his business, the back trouble disappeared.

“There are times in the winter during January and February when you are out after the big batch of sheep and putting up fences, out in tough conditions, you scratch your head a bit.”

“However, it is only short-term, and it is great to keep the sheep out.”

David believes performance recording is a key element in being successful in the field.

According to David, the average hill and lowland flock is lambing at 1.3. David lambs his sheep at 1.8 but has a maternal breed of sheep. In his view, this is an extra 50 lambs from 100 ewes for his flock.

In David’s view, it is an extra €5,000 in sales from the same cost base. This costs him the same amount of money to keep the ewe if it has one or two lambs.

“It is an area farmers need to look to is prolificacy in ewes without leaving themselves with more work. It is a fine line, but that is one area I think sheep could be improved without adding to the workload.”

“What you put into it, you will get out of it. So, when you start, I am not saying you have to go buying really expensive stock, but if you start with bad stock, it is very hard to breed them to good stock.”

“An aspiring sheep farmer should start with good stock, be prepared to spend money, but at the end of the year, have good stock to sell because you spent that money earlier.”

“It does not matter what kind of a ram you buy; you will not breed good stock from bad ewes.”

David explaining setting up as a sheep farmer proved challenging. Homeowners were not familiar with the sheep and the dangers dogs present.

“This was a major problem earlier on one year; I lost 24 lambs from lambing in August. A dog kept returning, and I could never seem to get him at it.”

“The ups were showing sheep and being relatively new, getting rosettes at the time, which was very rewarding. I suppose you were learning at the same time and getting stock to sales and securing good prices.” 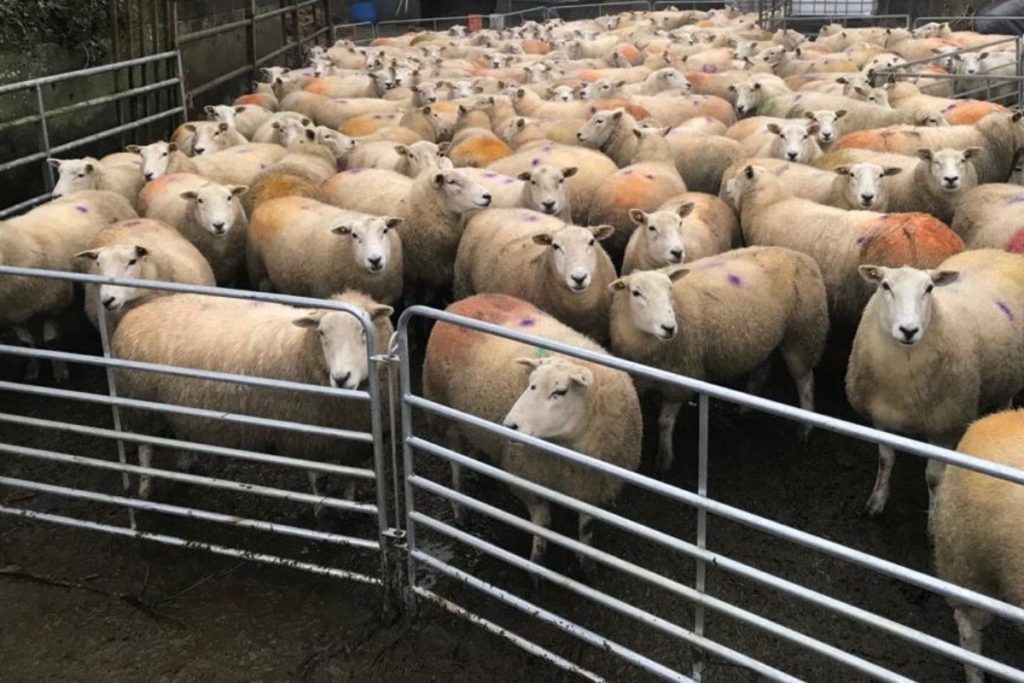 David’s regret, reflecting on his journey would be to have better handling facilities installed and fencing completed.

His highlight came in June 2021 when he hosted the Southern Ireland Lleyn Sheep Society open day.

“It was the most rewarding part of the seven or eight years to date. I definitely enjoyed the day, and it was a great success.”

David intends to maintain his numbers at 300, with the possibility of a 350-ewe flock. He hopes to erase the bottom 5% in performance recording and reseed 20-acres annually over six years.

“I hope to be running my 300 ewes with improvements year-on-year in five years. After that, I want to try to increase my number of hoggets per year.”

“I plan on selling half my hoggets to commercial farmers, and the other half to pedigree farmers.”

“The number of farmers will probably reduce, and farms will get bigger. So, the number of smallholdings will reduce as the years go on.”

The Lleyn breeder shared his view on the viability of sheep farming.

“I find in terms of drystock and grass production, I think sheep are probably the most profitable type of farming off-grass directly. The reason for that is your input costs are very small.”

“Depending on the system you run, the mad hours you can put in with sheep can be cruel. You could be better paid to work a day-and-a-half overtime in your job.”

“I suppose it depends on the sheep, but definitely, sheep farming is a viable business.”

“The input costs are lower than other types of farming enterprise probably at the backend of the year. So, the farm output is lower, but what you have out of it, you are getting to keep most of it,” the Lleyn breeder concluded.

- Advertisement -
Previous article€2,600 recorded three times at dairy sale
Next article‘We do not want to have to reduce the size of the national herd’