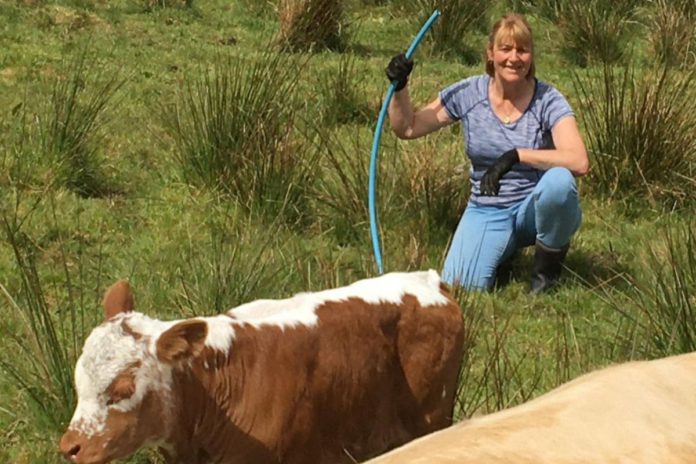 ‘Beauty and the beef’: Irish Moiled cattle at the heart of couple’s new venture

Tullyoran grass-based suckler herd comprises a diverse mosaic of different native breeds of cattle, with the Irish Moiled at the heart of their new venture.

The main farm is based at Mount Prospect, Derrylin, although the couple, Donna Conroy and Ron Patterson, live on a farm at Cooneen, Fivemiletown, where Donna’s business, ‘The Forest Stables’ has been based for 20 years.

Ron was born at Mount Prospect, a dairy farm, and he returned to the farm when his father became poorly and initially kept on the milking.

He built his first poultry house some 20 years ago and started rearing breeding stock. He expanded to the point that he decided to focus on the poultry and gave up milking, so he rented out the farm for several years.

Now that his sons are grown up, and he has more help, he has taken the entire farm over again and is restocking it.

Donna’s father was from a farming and butchery background. He took her with him as a child when picking beasts to purchase from local farms and followed them through the abattoir to ensure that he got the beasts he had picked.

Later, he reared his own beef at home because the trend back then was for pelleted beef, and her father was having none of it; he preferred cattle to be finished more naturally. 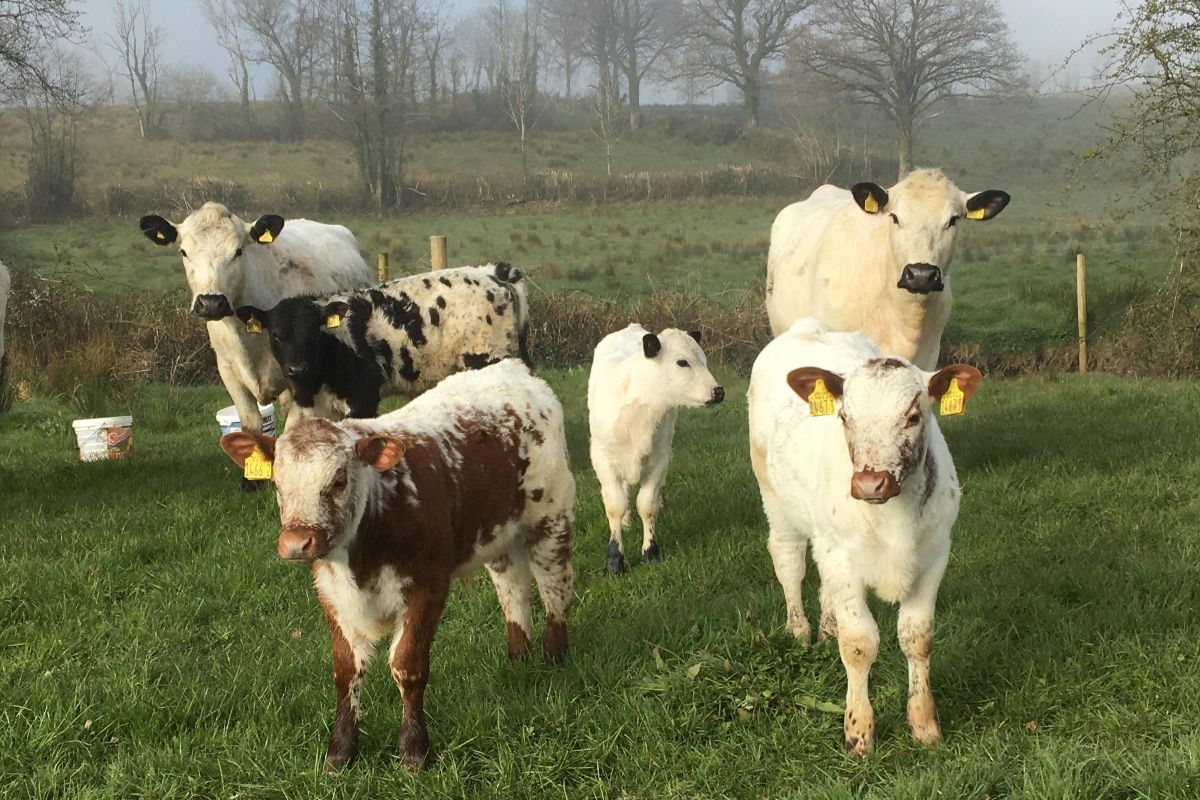 Donna originally had stables on the family small-holding near Comber, Co. Down but outgrew the site. So she moved to Fivemiletown 20 years ago and obtained a quota for a suckler herd.

She ran a handful of cows alongside her horses, using them for a grazing rotation system which helps to limit the damage which horses can do to the ground and reduces the worm burden.

Lockdown made them sit back and think hard. Donna’s Forest Stables business was temporarily closed and she realised that she could not continue to keep all her eggs in one basket. She decided to use the extra time on her hands to work with Ron and rear calves.

They bought in 60 heifers. At first, Ron chose Hereford, and Donna chose Angus, but they found themselves attracted to various other breeds and bought a few Blues, Shorthorns and Speckle Parks.

They soon discovered that the beautifully marked heifers which had caught their eyes were more expensive and sold very quickly, making them harder to obtain. 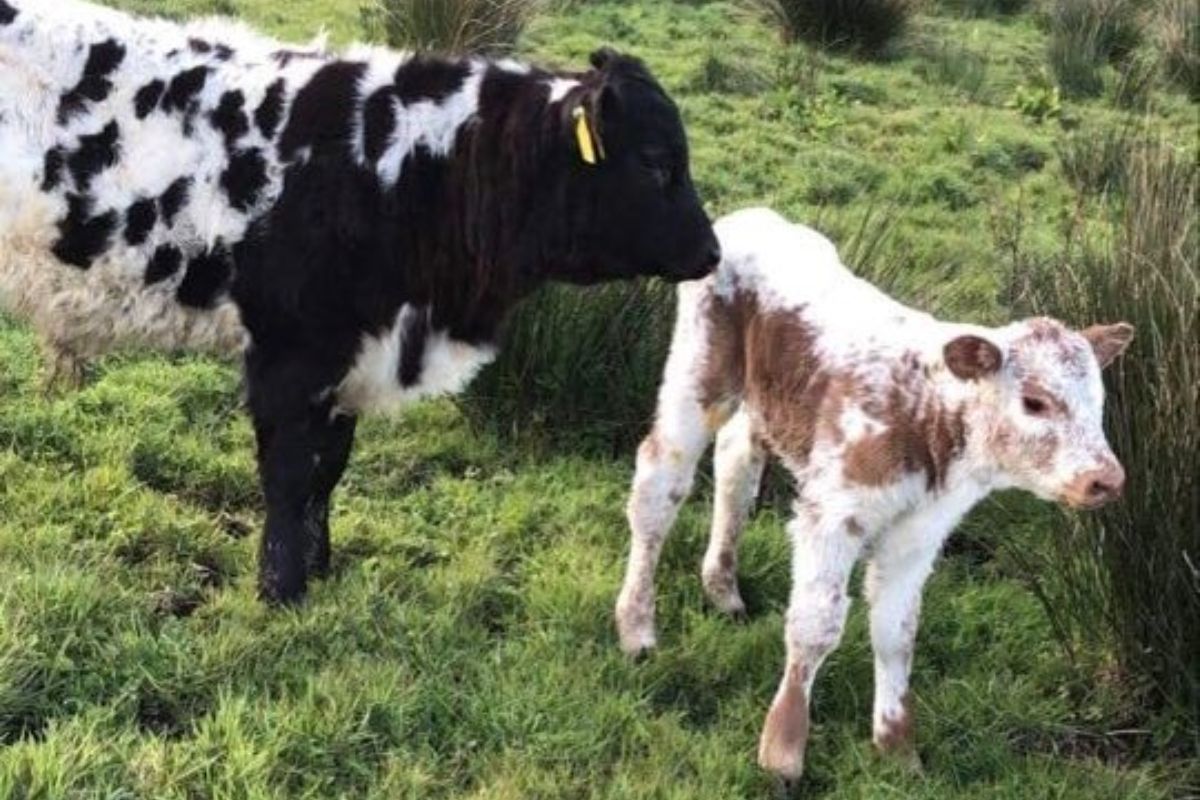 With only a few cows and three bulling heifers, they decided to experiment. Firstly, they considered purchasing a Shorthorn bull, but that was to change when they came across an Irish Moiled, pedigree bull, Cultra Tommy, which was was advertised locally.

Before viewing the bull, they researched the breed and felt the Irish Moiled breed qualities would fit in perfectly being a native, hardy type, medium-size and not too heavy for their Fermanagh ground which can easily become tramped.

They particularly wanted an easy calving breed with replacements having a good pelvis for calving with plenty of milk and a good natural beef shape. The colour and the fact that they are naturally polled was also an added bonus as Donna commented that she absolutely hates de-horning.

Before purchasing the Irish Moiled bull, Ron and Donna viewed his 2020 crop of calves. The first thing which struck them was how healthy they looked and how well the shapely calves were thriving on a rushy mountainside.

The herd was calm and settled to grazing and not a bit bothered by strangers visiting. They were sold.

Ron and Donna both comment on how civil Tommy is, “He just quietly moves out of your way, and we have not had a moment’s concern about his temperament; he is very easily managed and kept.” 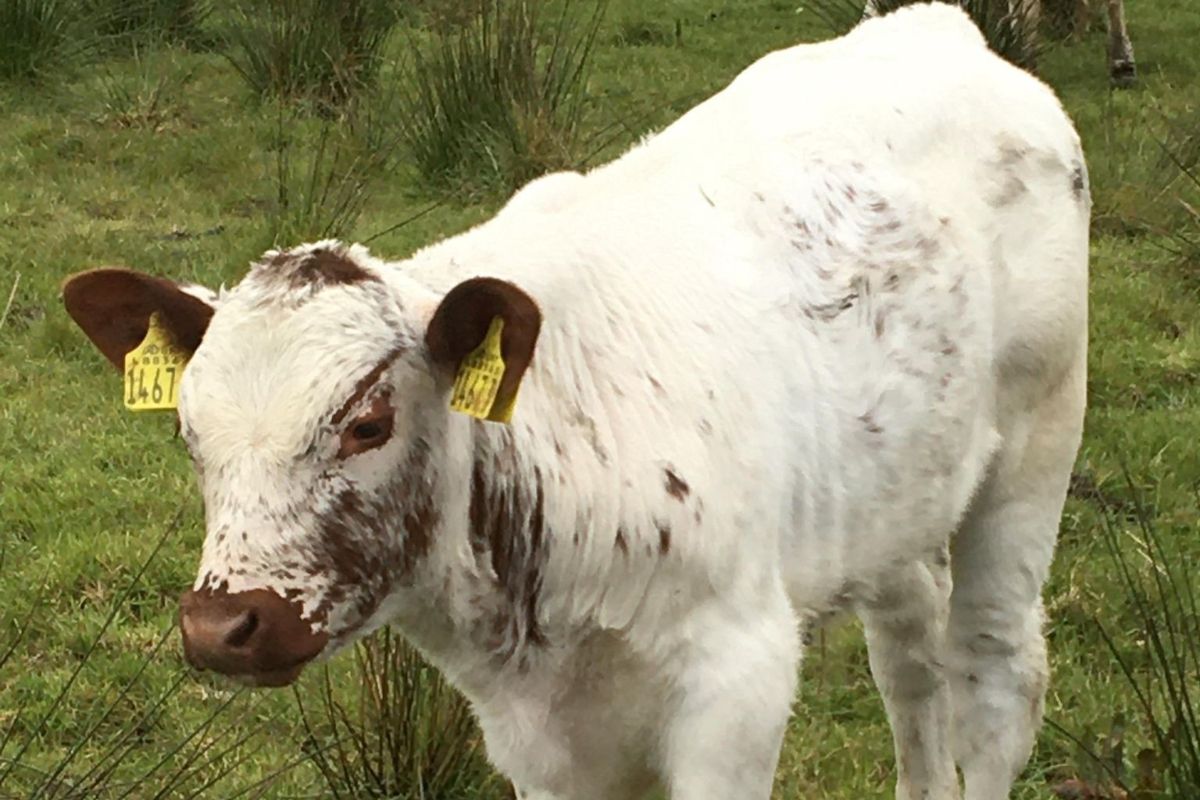 In July 2020, the Irish Moiled bull arrived and went straight to work with the first batch of cows and heifers. He is very calm and gentle, including with the calves.

They then purchased Shorthorn-cross, bulling heifers and added them to the herd at the start of August.

They aim for a similar plan this year as they do not have a lot of space for indoor calving and plan to calve outdoors from late April onwards with a calving barn available as needed if any problems arise.

At this stage, Ron and Donna want to keep the heifers as replacements but will need to keep an eye on the numbers required to be housed for winter between the two farms.

Bull calves will either be sold at weaning or as yearlings accordingly and are often sold to Donna’s neighbour.

A number of calved heifer outfits will be selected to be marketed each year, with the favourites who meet all their criteria being retained.

They intend to keep cross-breeding to bring heterosis and the best of each breed’s qualities out in their youngstock, using native breeds to produce good quality sucklers. Hopefully, a number of them will be uniquely marked and attract a selective buyer.

Calving Tommy’s first crop for Tullyoran has gone very well so far. Their Irish Moiled bull certainly lived up to his reputation of siring a lively, healthy calf that requires no intervention when born. 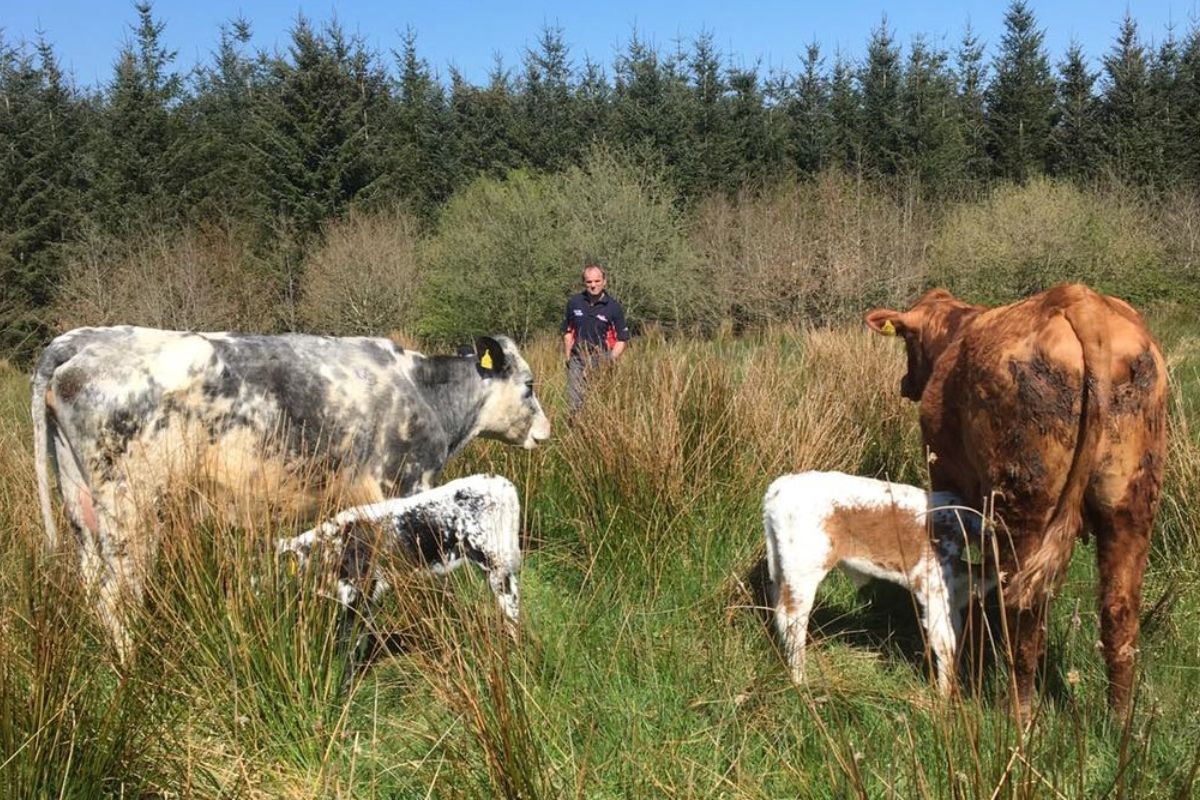 ‘Finding our way with this joint venture’

Ron and Donna’s intention is to bull approximately 50 yearling heifers plus their 23 calved cows and heifers this July and August.

They will select the first batch paying attention to each heifer’s age and weight, the older and heavier heifers bulling from early July, and then further batches of heifers will go to each bull at three-week intervals.

Furthermore, they have two other young bulls to share the workload, but the Irish Moiled bull will carry the primary duty of bulling the youngstock as he has all the attributes needed to ensure the heifers have as easy a time as possible when they calve down as two-year-olds next year.

They hope for calves with light birth weights who do their growing after they are born so that they require no assistance and are suitable and profitable for either replacements or beef.

Ron and Donna say, ‘We are just finding our way with this joint venture’, Donna commented that she loves the variety within the remit of medium size, hardy, easy calved, good beef quality, polled and of good temperament and sees the colourful calves as a wonderful bonus. 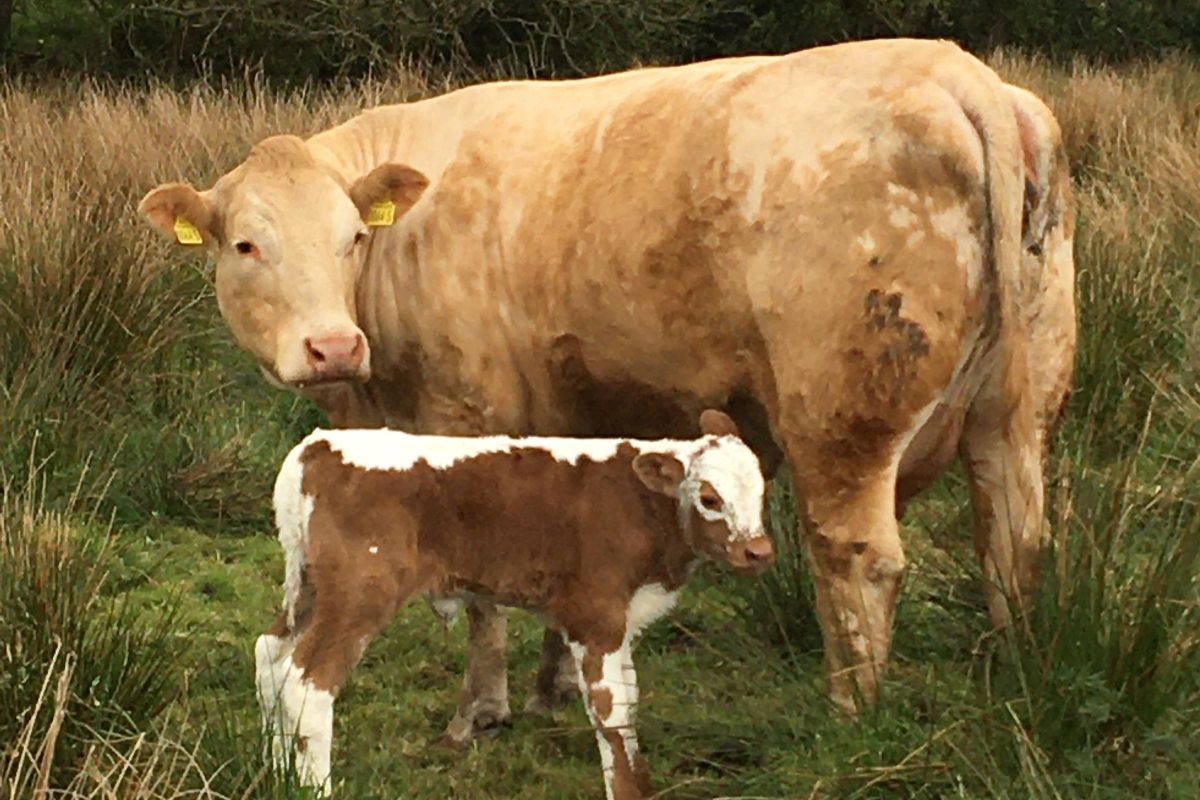 With the second lockdown now easing and The Forest Stables business open again, Donna looks forward to having a second source of income for the future to reduce the pressure of having to rely solely on one business in these strange and uncertain times.

One thing for sure is that the Irish Moiled will remain in the heart of their new venture, ‘Tullyoran Grass-based Sucklers’.

The Irish Moiled Cattle Society are hosting an online auction of elite bulls and a selection of females through auctioneers, Harrison and Hetherington.

The Magnificent Moilies Spring Sale occurs from noon on Thursday, May 5th, concluding Saturday, May 8th.

You can read about another Irish Moiled breeder.