That's FarmingThat\'s Farming Irelands Largest Farming News, Properties and Classifieds Network
HomeEditor's Picks‘I do ag contracting for the love of it; not for money’ 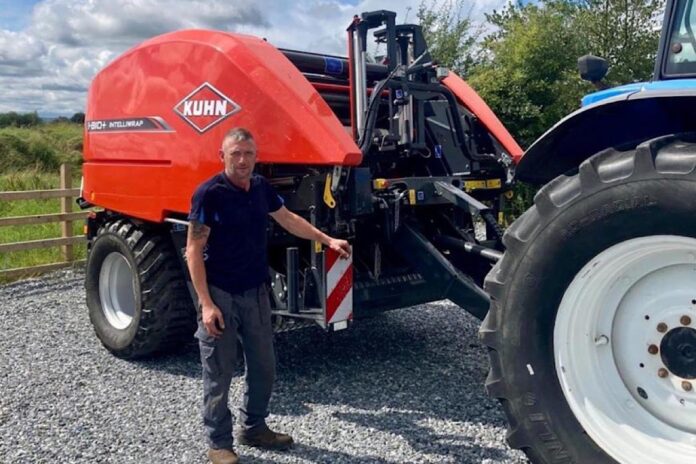 ‘I do ag contracting for the love of it; not for money’

As part of this week’s Ag Contractor of the Week segment, That’s Farming profiles, John McLaughlin. He discusses running an agricultural contracting business with his father, calendar farming and the industry’s future.

Taking over an agricultural contracting business can seem like a daunting task. But, John McLaughlin, a 20-cow suckler farmer, and his father, Charlie, from Culdaff, County Donegal, took what can be a challenge in their stride.

But, they were ahead of the curve as being farmers owning tractors meant they only needed to finance machinery.

But John was not thrown into the deep end as such, as before taking ownership of the business alongside his father, he helped the company owner during his free time, so he was familiar with the company’s background and operations.

Some of the father and son’s first purchases include a Taarup bio baler, a Strautmann silage wagon, a Tarrup mower and a JCB telescopic handler; some items came from an agricultural contractor exiting the field.

In their initial year in business, they started “well” with wagon silage, bales, and slurry spreading services. They built their clientele with some from the retired agricultural contractor’s base.

The business serves up to a 15-20-mile radius of its base, with John working part-time and juggling the enterprise; his father is retired, and another agricultural contractor assists during peak times.

“So, I have customers with me since I started, and I do agricultural contracting for the love of it; it is not for money.”

“Repeat customers are important to me. I have been doing it all my life, and I know what I am doing. So, when I complete a job, I do it to the best of my ability and keep them happy and in whatever way they want.”

“In my view, I cannot have a full-time employee because, one, weather is uncertain in Donegal, and two, work would not be there.”

“In terms of spreading slurry, up here in Donegal, you cannot farm to a calendar; you need common sense. But, to be honest, last year was not great but was not as wet as other years.”

The father and son bale from April to September (about two days weekly) with wagon silage services operating simultaneously and contract raking out to another person.

They carry out servicing and tractor repairs as required with no set upgrade policy.

They also utilise a plough, a 21m sprayer, bale lifters, harrows, a rotavator, a Marshall side delivery muck spreader and a 16T Smyth dump trailer.

“We are hoping to do better than break even this year. However, I think contractor rates are at a price they should have been a couple of years ago when things were half cheaper.”

In their eyes, the critical elements to succeeding as an agricultural contractor are “being good to your customers and keeping machinery as well as you can”.

John shared his outlook on Irish agricultural contracting into the future.

“Everything is put on the farmer, but cattle prices are not going up to make enough.”

“I will not know whether agricultural contracting is going to be a viable business till after next year as nobody knows what is coming next year.”

“I know fertiliser prices have come back in price, but if it goes back up to what it was this summer, no one is going to spread it,” the agricultural contractor concluded.