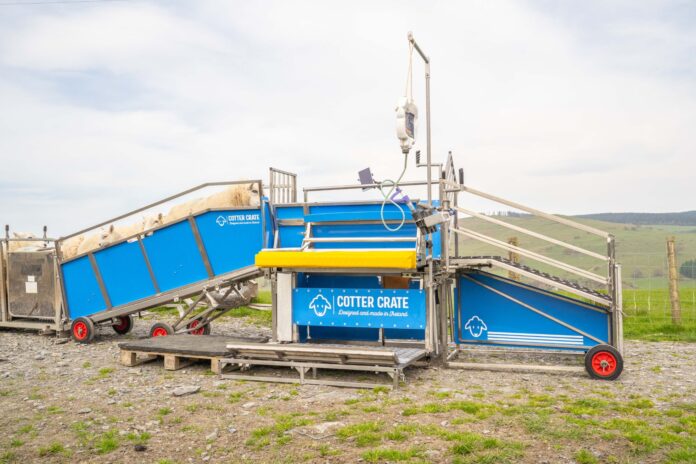 The Cotter Crate is a sheep handling crate that makes carrying out stock management tasks for both lambs and adult sheep quick, easy, and safe.

Hailing from a 200-ewe farm, they recognised the industry’s need for a handling system that focuses on making lamb handling easier and also caters for adult sheep.

The result is what they have described as a simple-to use-system. The animal is comfortably held under its own weight at operator height without applying any pressure.

They claim that this results in a calmer handling experience for both handler and livestock and up to a 50% reduction in animal handling time.

They have launched the solution alongside the Cotter Crate is SmartWorm. This is an advanced weighing and targeted selective treatment (TST) phone app.

The brothers – Jack and Nick Cotter – claim their innovative hardware and software solution – Cotter Crate and SmartWorm app – will:

The app enables weight recording, treatment management and uniquely enables farmers to conduct targeted selective worming based on an algorithm.

Farmers can use the app with the Cotter Crate, or with other sheep handling and weighing equipment already on-farm, to conduct targeted selective treatment.

According to the brothers, the built-in worming algorithm enables a sheep farmer to reduce their use of wormers by approximately 40% without a loss of animal performance by identifying in real-time which animals would or would not benefit from a wormer treatment.

The algorithm calculates a lamb’s potential growth based on several factors:

It gives them an individual target, and if they are not reaching this, it recommends treating the animal.

Jack Cotter, co-founder and CTO, Cotter Agritech, said that controlling worms is one of the biggest challenges facing sheep farmers in Ireland, the U.K and across the EU.

He said that modern worm control is becoming unsustainable due to resistance issues with anthelmintics, or wormers, and negative environmental impacts.

He added that resistant worms cost the European livestock industry millions each year.

Cotter explained: “Our hardware and software solution is the most practical, simplest and complete way of reducing wormer use on-farm.”

“Farmers can now do selective worm treatment (TST) in a manner which doesn’t slow them down. This solution unlocks this technology onto the sheep farming industry.”

“For the average Irish sheep flock (109 breeding ewes), a return on investment using our software solution is delivered within 18 months.”

He explained that a flock could achieve this through:

Farmers who already have suitable weighing equipment to use the algorithm can download the SmartWorm app and avail of a 3-month free trial.