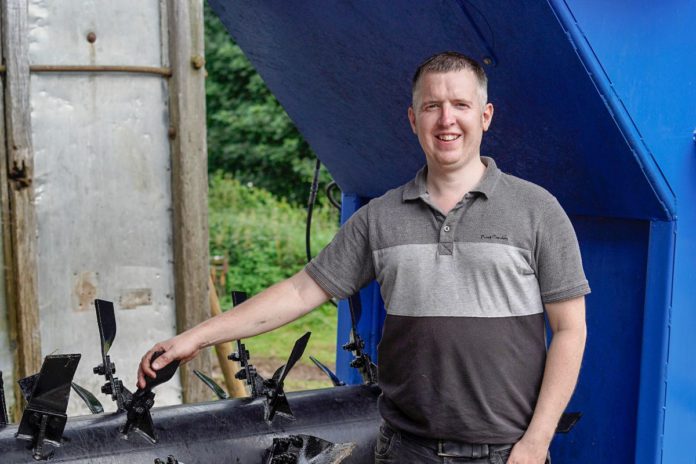 A Westmeath man claims his business, Muirin-Aer, is “the first” to design, build and successfully test a compost turner in Ireland.

An organic farmer, Gerard Deegan, just outside Mullingar in Co Westmeath, approached the 36-year-old two years ago regarding the concept.

His vision was to replicate what he saw on farms globally – across America, Australia, and mainland Europe – through social media on the Emerald Isle.

He has been in organics for over twenty years and farms on the principle that “having nutrients to put back into the land is one of the most critical things”.

Deegan explained: “The concept of actually making good compost was also something that was in my mind. I have any amount of farmyard manure. However, getting it to compost properly was the biggest problem that I was encountering.”

“That is when the idea of creating a compost turner came into play. I saw a lot of videos online of people making compost using compost machines. However, I could not find any in Ireland; they were also very expensive to import.”

That is when he crossed paths with Joseph, who hails from a dairy farming background in Tyrrellspass, Co. Westmeath and studied mechanical engineering at Dublin Institute of Technology.

“I always had a keen interest in agricultural machinery. My work experience consists of heavy engineering design, e.g. conveyors, support structures for conveyors and screening plant used in quarries and recycling centres.”

“Also, I worked on frames for pick and place systems in the pharmaceutical industry,” he added.

This diverse experience fed into his success in creating this compost turner which he will showcase across Ireland this year.

“The nearest manufacturers of compost turners, I found, was a company in Belgium. I took on the job of designing this machine as I did not have much to do in my spare time because of the Covid-19 pandemic.”

“As I am a design engineer, I sub-contracted welding and fabrication to get the best quality of work and the best rates. The machine is primarily made from steel. This means there is huge potential for sales in the UK and Ireland.” 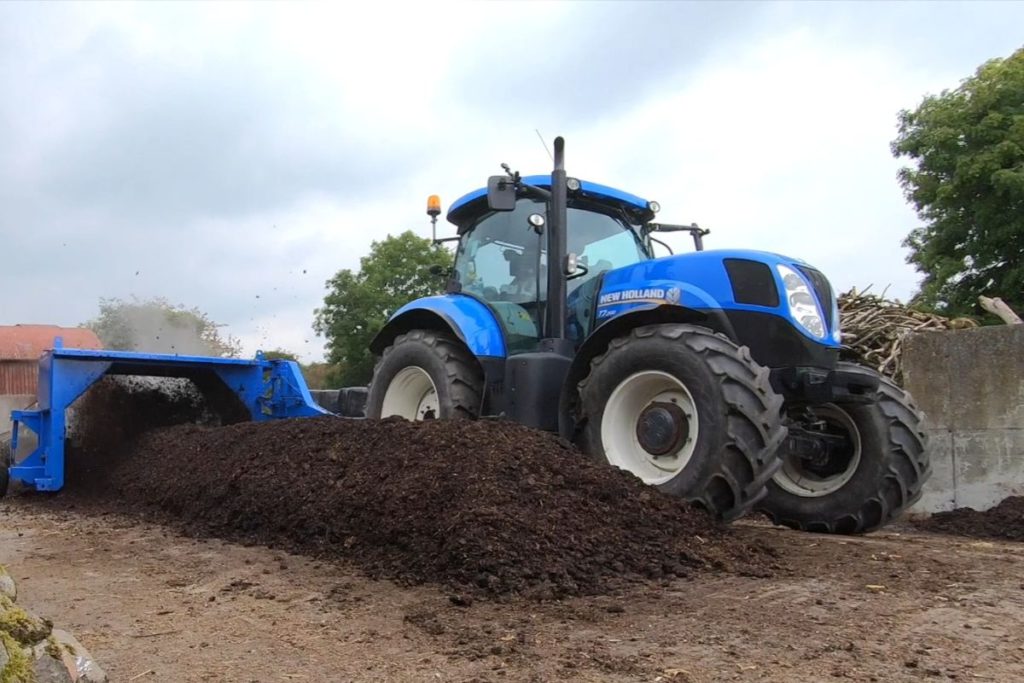 Firstly, to create this compost turner, he produced all the CAD (computer-aided design) drawings required for manufacturing and produced programmes for CNC (computer numerical control) machining.

“The Irish word for compost is Múirín. Aer is an abbreviation of the word aerate, and that is where the business name comes from.”

“The machine is especially unique as I designed it without ever physically seeing a compost turner. I just saw pictures of them online. The rotor consists of bolt-on tines, and these have been specially designed with a curve on them to produce the maximum amount of aeration.”

“The machine is a tractor-towed implement consisting of a rotor with an inward spiral. The onward spiral is needed to maintain the high temperature in the windrow.”

How does the machine work?

According to Doyle, a compost turner is an “excellent way” of creating compost in a renewable and safe way.

The machine is a tractor-towed implement consisting of a rotor with an inward spiral.

Farmyard manure is set up in lines called windrows for the machine to work. The compost turner’s main feature is a rotor with bolt-on tines.

The tines are bolted to brackets, which consist of two spirals to meet in the centre of the rotor

The spiral pattern rings the material from the outside of the windrow to the centre. The machine requires roughly 100HP with 540 RPM on the PTO shaft speed.

The most important requirement for the tractor is a creeper gear or a variable transmission, which gives a travel speed of 0.2km/hour.

Doyle explained that aerobic bacteria break down the material during the turning process. 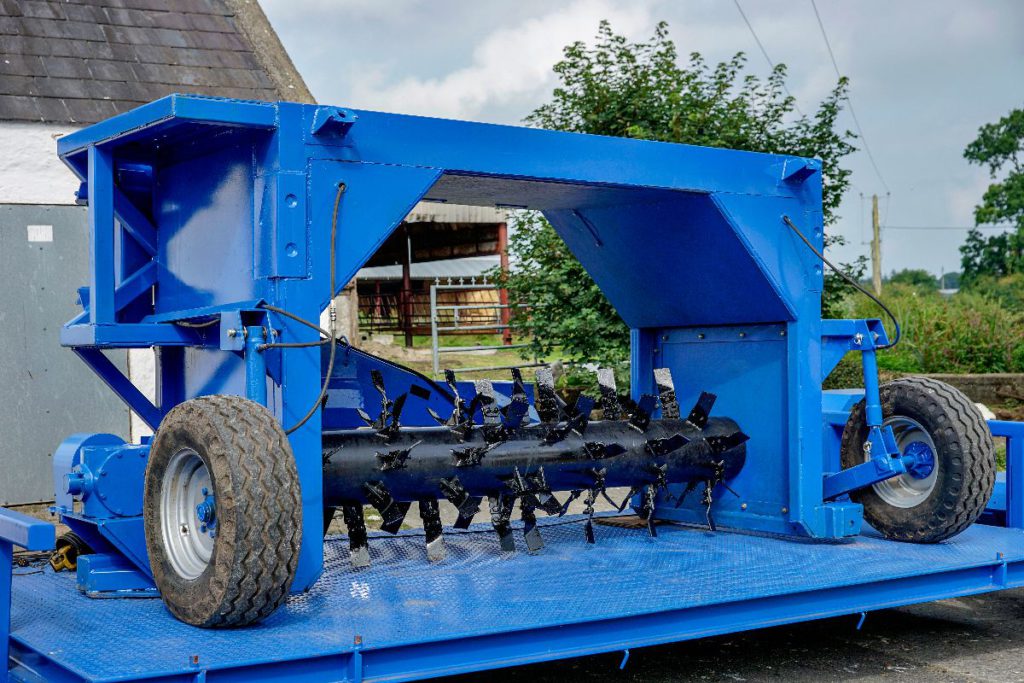 The temperature is also monitored, with an initial value of 70 degrees Celsius.

The high temperature is of “crucial” importance to kill off the weed seed and pathogens (disease).

He added that after two or three turnings, temperatures reach about 55 or 60 degrees Celsius.

At this stage, turning intervals reduce to maintain this temperature. “Whilst carrying out trials in summer, it was established that the farmyard manure can be broken down and the ambient temperature reached in a short period.”

“At the end of the turning process, the bulk of the material is reduced without losing nutrient values. A lesser bulk means a reduction in spreading costs. The compost also gets to the plant root quicker.”

Doyle explained that you could use other biodegradable materials – such as law grass cuttings, coffee grinds, tea bags, vegetables, and fruit waste – in conjunction with farmyard manure. 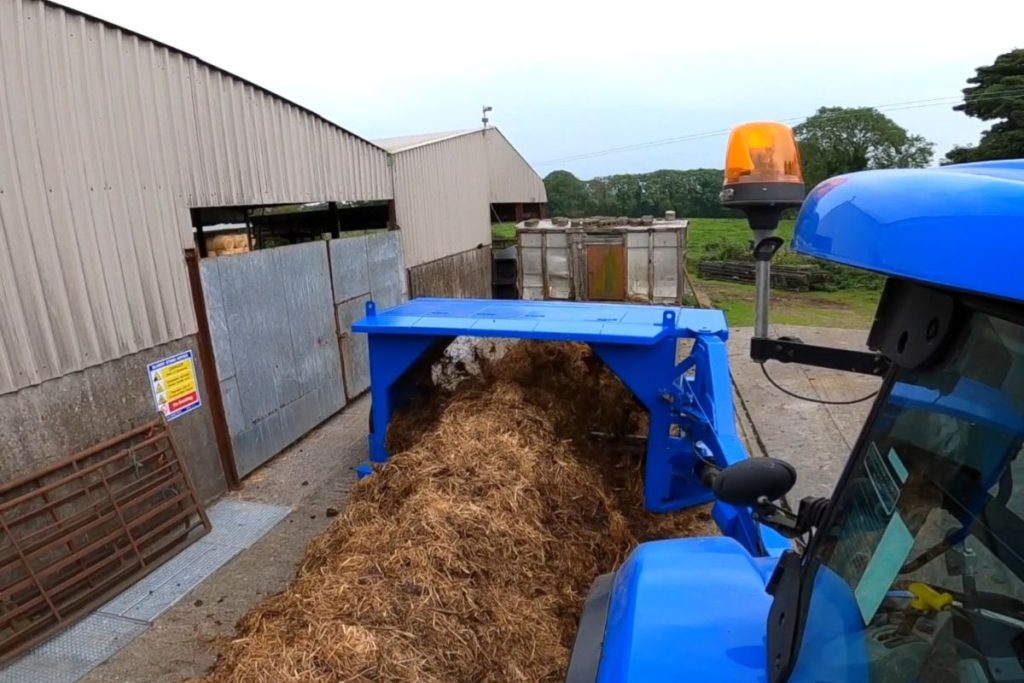 According to Deegan, compost is “like black gold dust”. He believes “the future is highly nutritious good quality aerobic compost, which is a safe product for land and gardens that is environmentally friendly”.

Doyle added: “Compost has a major role to play in creating an organic fertiliser which both organic and conventional farmers should be striving towards as lowering carbon emissions, and chemical fertilisers are a must in tackling climate change.”

“Scientifically, the benefits of this machine are very broad as organic additives: e.g., hemp and other biodegradable materials can be added to boost nutrition value.”

Doyle is appealing to agricultural research departments and agricultural colleges to research this machine’s “potential” in producing compost and its ability to offer an alternative to moss peat compost.

“My subcontractors have already started manufacturing a second machine, an upgrade on the first prototype, which worked brilliantly, so already Muirin-Aer is striving towards excellence.”

“This year, I hope to get to some agricultural shows to showcase the product; that is, if they go ahead,” he concluded.

- Advertisement -
Previous article
‘Selling a 1.9kg chicken for €3.49 is grossly irresponsible’
Next article
Prices from €50-€2,390 at Ennis Mart