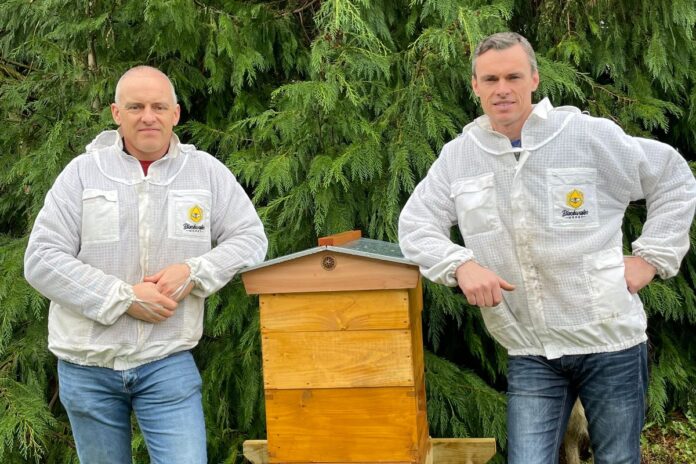 “I am the eldest son, and my brother is the second eldest son of a dairy farmer. We have a long history of farming going back several generations.

Currently, I am a senior army officer with the Irish Defence Forces based primarily in Dublin and living in Athy, Co. Kildare.

I have completed several missions abroad in Liberia, DR Congo, Kosovo, Afghanistan, Syria and Lebanon. Also, I am the proud father of two young boys.

The other half of the team is my brother, John, a full-time dairy farmer with both of my parents, Noel and Anne.

He looks after the logistical side of the honey business. He is a proud father of two young boys and is married to Denise.

Our business is in the parish of Ballyhooly and the townland of Fermoy, Co. Cork.

We have always been interested in beekeeping. We are a third-generation beekeeping family who learnt the art from an early age from our two uncles, who kept bees.

Most weekends during the summer, we were involved in some shape or form with helping our uncle and again in the autumn and wintertime.

We learnt all of the basics like hive maintenance, care and storage of hive materials, how to extract the honey and bottle it etc.

We ventured into beekeeping as we both have a real love of nature and the environment. Growing up on a farm, you are very much in touch with the seasons and nature.

We also took over the art of beekeeping from our uncles due to one of them retiring from it, and so it was a natural progression, I suppose.

We then purchased our own hives and began our own apiaries in 2020. John manages the hives on the farm, whilst I manage some in Dublin.

We then set up the brand, which we named ‘Blackwater Honey’ after the river that flows alongside our farm.

John and I both completed the Federation of Ireland Beekeeping Association (FIBKA) preliminary beekeepers course with local associations both in Kildare and Cork.

After that, I completed the intermediate and senior-level scientific exams through FIBKA.

Getting set up involved a lot of hard work and financial input. There are many things like registering the business with Revenue to be tax compliant and getting yourself registered with DAFM to sell your honey.

Then you have to get a logo or brand designed and all the things associated with that. A very good website then is a must-have. You need it for people to find your business online, and which you can sell your honey directly to the customer.

You have to create social media accounts as more and more businesses have them and use them to engage with their audiences.

If you do not have one, you are immediately fighting an uphill battle. You need to purchase all necessary equipment like the hives, bees, extraction equipment and build a honey house or shed to store all of the things.

The list seems endless at the start. However, I would advise you to make a list and tick off the things that need doing immediately.

It helps maintain a record of what you have done and what you need to do thereafter. It keeps you on track and helps to not get overwhelmed by it all.

We typically have about 20-40 hives each season – depending on various factors. Sometimes we get to 50 hives if we are doing splits or conducting swarm control or if we are doing queen rearing.

There are lots of things involved in beekeeping. In winter, you are prepping for spring, making up new hives, buying new equipment in the sales or restoring old equipment.

You will spend a lot of time making up many new frames for the hives and rendering down wax and making candles etc.

There is also time to read up on beekeeping techniques and, of course, attend many online lectures in order to gain more knowledge.

A year in the life of a bee-keeper

In winter, we also have to ensure that the bees have enough food stores like the fondant which we give to them and which they feed upon.

Some chemical treatments have to be done for Varroa mites in early December or January to reduce the number of mites in the hive before the spring build-up.

The mites cause many diseases like deformed winged virus and generally make the bees weaker.

In early spring, we generally leave the bees alone to build up whilst just monitoring them for food stores and activity. There is little done by way of inspecting them in case you chill the brood, kill or crush the queen – a rookie mistake some beginners or amateurs make.

If this happens, there is not a hope of replacing a queen that early in the season unless you merge them with another hive. Therefore, we would never advise going into the bees until late March/April, when the days are generally warmer.

In late spring, as the days become warmer, you will be adding on your supers (the term we use for honey boxes on top of the brood chamber where the honey is stored) or splitting hives going into May.

We do this to re-Queen older hives or to prevent the swarming tendency of the bees. We want our hives strong and Queen right as the summer nectar flow begins but do not want them too strong as they will swarm on you.

Beekeepers do not want their bees swarming as we will lose not only time but also a large number of bees required for the production of honey. 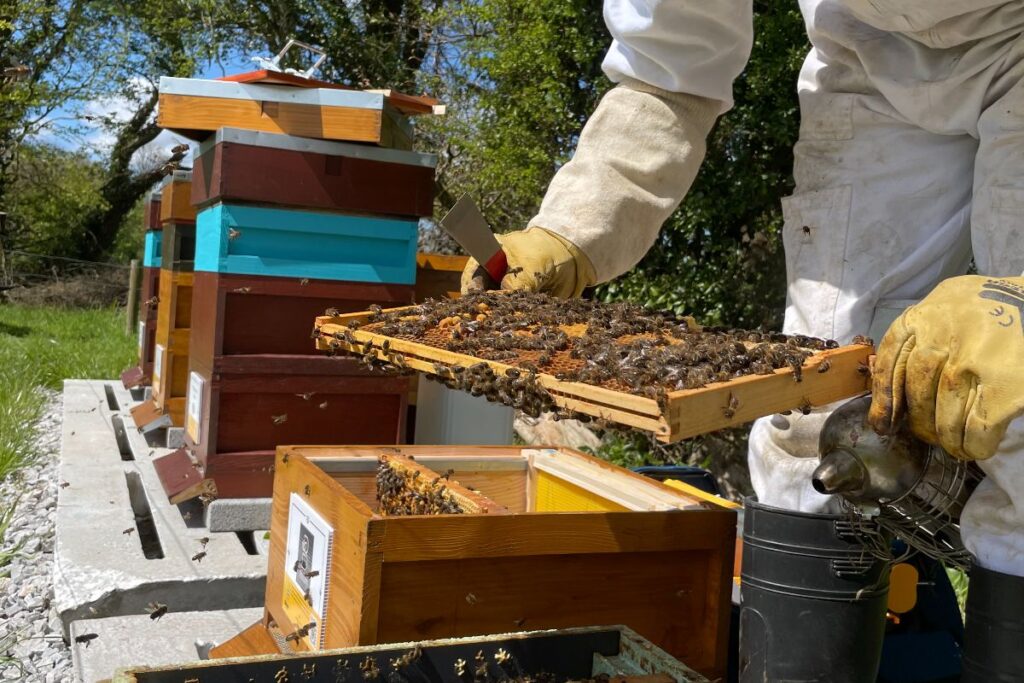 Typically, in summer, you will have to inspect hives weekly to prevent or deal with any swarming.

If you are splitting hives, then it is to double your colonies or replace old queens with new ones to ensure that the bees do not have an old failing queen.

In early to late autumn, you take off the supers to extract the honey. The bees will then need feeding with sugar syrup to build up and replenish their stores. The honey we take away has to be replaced by sugar syrup which the bees convert to honey.

You need to do all of this before winter arrives again so that they have had time to replenish their stores sufficiently. Once you do this, there is the putting on of the chemical treatments to again deal with the varroa mites.

Many beekeepers will then work on extracting the honey in late autumn and then jarring it and selling it.

Of course, one can extract honey at any time of the year, but most beekeepers leave it until late August/September to do it.

Then, you can relax for a month or two and it all begins over again by cleaning up after the season and rendering down the old wax, etc.

I think it takes a great deal of knowledge, patience and a high level of understanding of what the bees are doing and why, to be a successful beekeeper: that and a love for them and for nature, in general.

They are a fascinating insect to watch and learn from.

The main highlights for us were winning the gold medal in the preserves section of Blas na hEireann (Irish Taste Awards) along with winning the overall food category of the Irish Made Awards and winning gold and silver medals in the Irish Quality Food and Drinks Awards in 2021.

We love working with bees and inspecting them. Looking into the hives each time is fascinating and brings a smile to our faces when you see bees and what they getting up to in the hives.

Each time is different, and not one hive is the same; they are all unique in their own way. 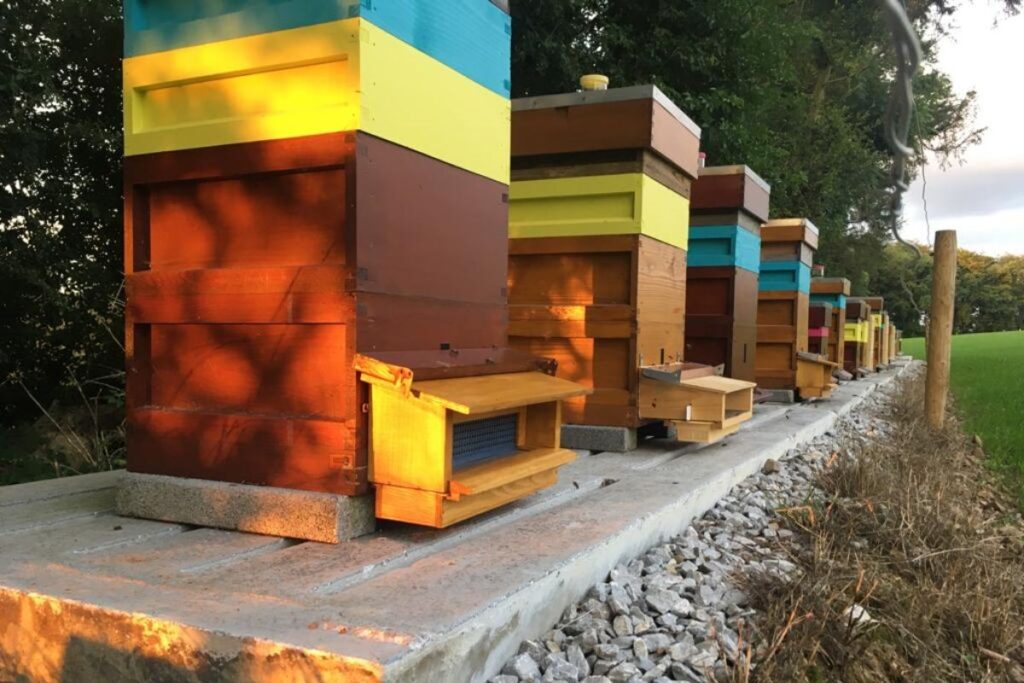 We face many challenges as beekeepers, from global warming, which is changing the seasons, to the lack of biodiversity in terms of the plants the bees can feed upon.

We also face challenges from the varroa mites and the diseases they pass onto the bees and which we have to deal with since they (the varroa mites) arrived here in Ireland from Asia.

There is also the threat of non-native species of bees like the Asian Hornet, which it too has now made its way from Asia to Europe.

There is also the threat of imported bees (which are being imported by unscrupulous beekeepers) mating with the native Irish honeybee and which is hybridising them.

Unfortunately, these imported bees are threatening the native bee, which is perfectly adapted to our climate and who have been scientifically proven to be better adapted to the Irish weather and more frugal with their consumption of winter stores.

There are other worries too, like the import of the small hive beetle, which is currently in some parts of Europe.

It could be brought into this country; this would then decimate the hives here if they were to establish here.”

Stay tuned for part two of our interview with Blackwater Honey.

- Advertisement -
Previous article‘Never turn your back on a cow, and always have your escape route planned’
Next articleFeeding ewes: Precision chop silage is preferred over round bales