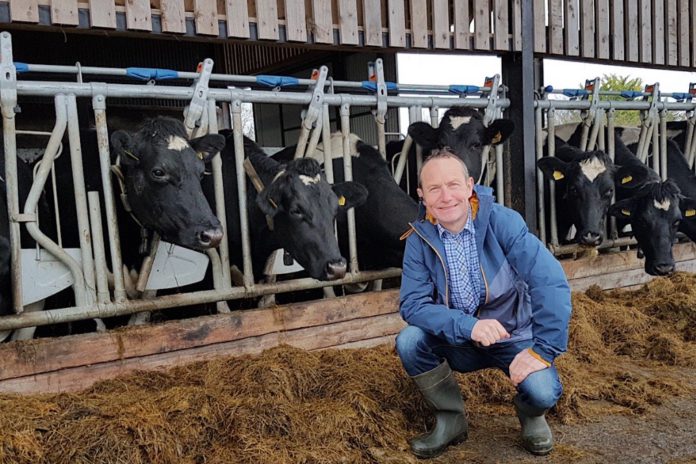 In this week’s dairy segment, That’s Farming, speaks to Oliver Dempsey from Barrowvale herd. He discusses increasing ET work, having a cow with an EBI of €222, using 100% AI, calving heifers at 24-months, environmental challenges and reaching 1,650 milk gallons.

His father, Michael, established the Barrowvale herd during the 1970s by acquiring pedigree heifer calves and graded up some of his own “better quality” cows to pedigree status.

The family sourced their original heifers from the Ballyrogan herd, Wicklow and Mellifont herd, Louth. The main cow families in the herd include Damsels, Sabrinas, Dheatys, and Dobees.

“With a dairy system, when you are trying to produce milk off grass, you stay away from an animal who is used to a continental system where they are getting large amounts of concentrates, maize, and feed,” Oliver Dempsey, a Teagasc Portlaoise Green Certificate graduate, told That’s Farming.

“You want a cow that is hardy, resilient, and will go back in-calf. The British Friesian cow is ideal to do just that. Fertility takes care of itself. Also, we try to select the production-type cow.”

He also opts for a cow with a low somatic cell count with no mastitis problems, a good milk yield, milk solids, and will go back in-calf when required.

“We like to treat cows fairly well, but at the same time, we do not overfeed them.”

Oliver uses a feed-to-yield system in his 6-unit Herringbone milking parlour. He feeds cows 8kg of concentrates when they are on silage and 3.5kgs when on grass to achieve the above figures.

“There are a couple of reasons why I do not generally use a stock bull. We could pick up a bull at the end of breeding if we did need one. However, we get on well with AI and achieve conception rates of 95%.

When Oliver took the reins of the farm five years ago from his father, he placed emphasis on increasing ET work rather than herd expansion.

He claims he has the highest British Friesian EBI-rated cow in Ireland classified VG/EX, Dobees48, with an EBI of €226.

He flushed, Dobee 48, last year, and she classified VG/EX before “taking the year off” for flushing.

She is classified EX 92 5E with a current EBI of €222. The flush yielded ten embryos from her, and resulted in eight bulls and two heifers.

This cow is classified EX 93 5E. He got eight calves from her from one particular flush several years ago and got a further four embryos in recent months.

“All cows in the herd are genomically tested, which helps identify the best traits and indexes. I am trying to improve herd quality and pick some of the best cows so we can accelerate the genetic advantage they have.”

The herd is also home to accolades from the Pure Friesian Herd’s competition.

These include having six cows in the top EBI list for cows classified VG/EX last year, the highest protein cow in 2019 and the highest EBI Pure Friesian herd in Ireland in 2018 and 2019.

He calves his herd from January 7th to March 24th and October and November for autumn-calving. According to Oliver, the herd’s calving interval is 388 days.

An early calving system enables him to have stronger bulls available for sale, and autumn-calving ensures he has ET calves from heifers at 24-months-old and have sufficient housing.

“The only reason I do not have more cows calving in January is not getting going properly breeding.”

“I have a few cows that calved in February the year before. So, you might AI them in April, try to get them back to January, and you might get some of them pushed back.”

“However, it is hard enough to get them back into January. If you have a cow that slipped a month and she is calving in March, I find it easy enough to get her back into February.”

“I think it must be weather-related. May is much better, whereas when we try to AI in April, there are often cold and wet weather conditions. Conception rates do not seem to be as good in April.”

He calves his heifers down at 24-month-old.

“If you go for longer, you are going to end up having her calving a bit late, and if you go over two years, she is going to be calving April or May and then you are not going to be getting value off grass.”

He replaces 35% of the herd per year and sells between ten heifers and ten cows from first-calvers to any age and culls 10% of cows due to losing a quarter or not proving in-calf.

The family sells up to 15 6-month-old bulls for breeding privately,

“Sales are something I would love to do myself, but I do not have time or manpower to do it. However, it is a great way to get your name out there.”

“We have built up a name over the last fifty years. Some customers come back every two or three years to buy a bull.”

Oliver gives his cows fresh grass every 12 hours and uses a paddock grazing system. He utilises a plate meter over the last few years and finds this a  “very useful” tool.

He milks in a 6-unit Herringbone milking parlour, a process that takes 70 minutes when cows are on grass and 120 minutes (includes calf feeding and heifer training) when cows are housed.

His father later built a four-unit milking parlour and planned to expand it to a 6-unit. However, Oliver feels “if you had 12-unit you would be as twice as well off today”.

Oliver plans to expand his original parlour or build a new one to include automatic cluster removers and reduce milking times to 30-40 minutes.

Then, he has a 4-span slatted unit on his out-farm alongside a 6-span bedded shed for weanling heifers, bulls, in-calf heifers with Dairypower automatic scrapers on both farms.

“The government are making more work for farmers the whole time, and farmers are not making any more money out of it. It will put people off farming, if they keep increasing regulations and not compensating farmers for it.”

“If this was any other sector and they were making more rules and obligations on employees, they would have to compensate people for it. They do not seem to be doing that with farmers.”

“We have to also keep an eye on the climate, which is very important. It is a challenge I think farmers are up to and willing to embrace.”

“We do not want to be in a situation where we are going to end up with a food shortage because farmers get fed up and stopped producing food.”

Oliver plans to focus on the herd’s genetics and environmental practices.

In addition, his goal is to maintain 1,650 gallons of milk with higher percentage solids and lower inputs, to continue improving his herd performance and build a milking parlour on the out-farm – due to land availability.

“I am always trying to increase milk production and balance that with a cow that has fertility and other good traits.”

“Dairy farming has a good future if the powers that be recognise what farmers have to offer.”

“I hope that in the future, Irish farmers would be recognised for our grass-based system and our environmentally-friendly system for producing milk.”

“So, I would like to see in the future, milk transferring from the continent to Ireland where it can be produced more competitively and in a more environmentally-friendly way.”

“If politics does not get in the way, I would be hopeful Ireland could become a bigger producer of milk and the powers on the continent would reduce milk they are producing and let Irish farmers produce it instead,” the Dunamaise Discussion Group and Laois grazing group member concluded.