That's FarmingThat\'s Farming Irelands Largest Farming News, Properties and Classifieds Network
HomeEditor's Picks‘New Zealand is the place to be as we are not in... 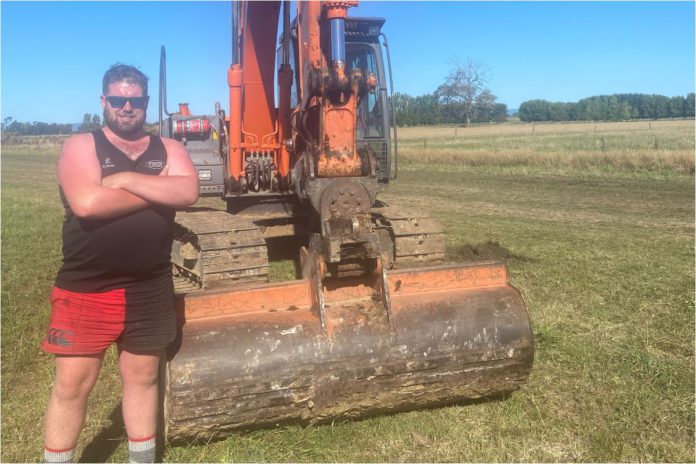 That’s Farming speaks to Paudie McGrath, a Tipperary native, about working for an agricultural contractor in New Zealand.

“I remember being in a computer room in school, and instead of learning the subject, the boys and I would gather down the back to watch YouTube videos of silage harvesting in New Zealand. I just said I love to go out and do it.”

Those are the words of Paudie McGrath, a 25-year-old Ballina, Co. Tipperary native, who ventured to New Zealand in October 2019 and “has not looked back ever since”.

He is employed by Finch Contracting, which is located in the north island and offers services including grass and maize silage harvesting, along with groundwork/cultivation and maize planting.

According to McGrath, the Finchs also milk approximately 600 cows, farm some 1,000 steers, and grow maize.

“I organised the work in New Zealand as I knew a lad who was here in recent years. I contacted the business owner who told me that he did not have any vacancies at that time,” he told That’s Farming.

“To be honest, I looked for other jobs, but time was running out. However, about a week later, I received a phone call from the boss who said that one candidate was unavailable due to unforeseen circumstances.”

“I jumped at the chance, got onto an agency for my visa and flights and jetted off. It was straightforward as they organise everything, and all you have to do is pay them,” added Paudie, who worked for an agricultural contractor and farmed after his Leaving Certificate. 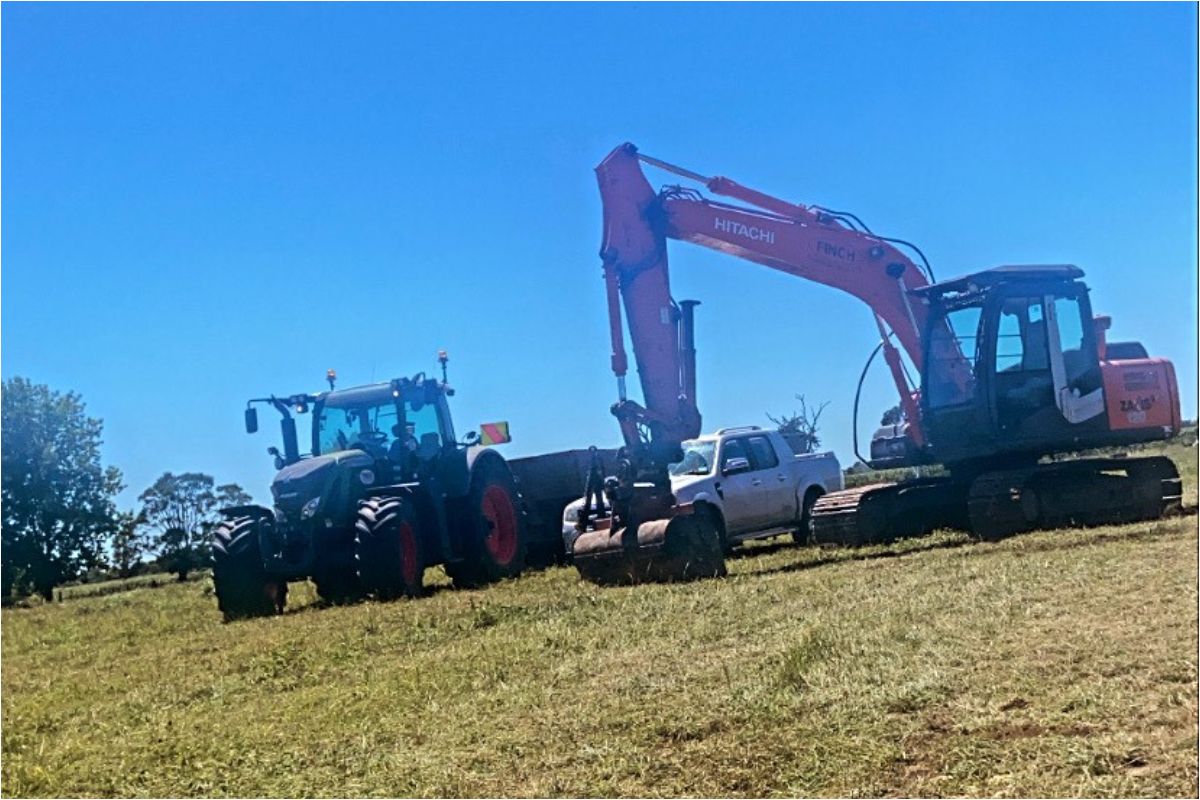 Working for an agricultural contractor in New Zealand

Furthermore, the have eight trucks, which they use to transport silage and maize, along with cultivation equipment such as ploughs, power harrows, cultivators, seeders, and a range of CLAAS mowers and rakes. Besides, the company has round and square balers, including two Fusion 3-plus and a new Case square baler.

“At first, I was responsible for raking, and then, I went into lime and fertiliser spreading and power harrowing. The company has a Hitachi ZX120 for doing their own work, so I was on that for a while during maize time.” 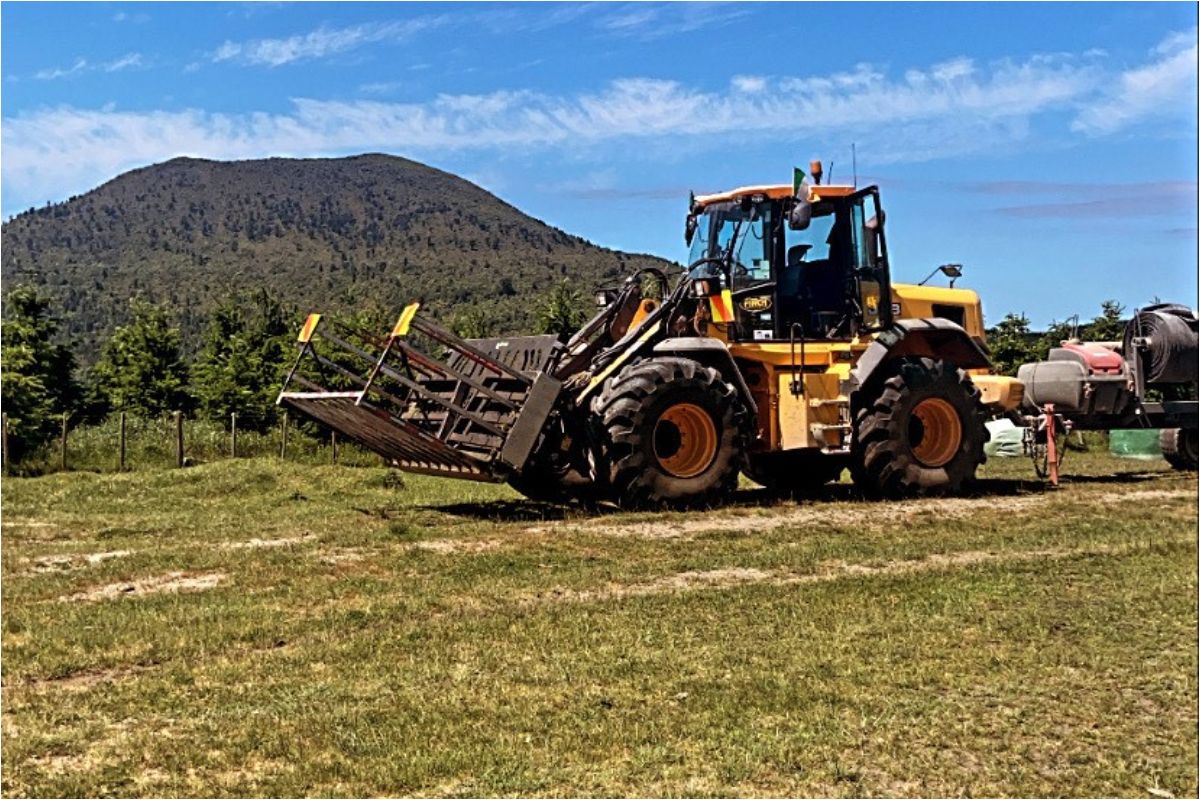 McGrath noted that there are “major” differences between agricultural contracting in the Emerald Isle and New Zealand, not only in terms of scale but also in how work is organised and carried out.

“At home, everyone wants you in an hour or tomorrow, and if there is rain forecast, it is just go, go, go. Here, it is a lot different; weather is the biggest factor, and farmers are not putting you under as much pressure.”

“A farmer rings up and says they want their silage harvested, so it is written down, and we add them to the list. It could be 7-10 days before we get to that work. Now, not every farmer would be like that, but most are.”

“We start most mornings at 8 am, and if we are busier, we have earlier starts. We do not work all night as they like to have you home around 11 or 12 pm at the latest in busy times.”

“Paddocks sizes vary from 5ha to 100ha. We cover a vast area and could travel 5 or 6 hours to jobs. You wouldn’t want to be scared of hills up here anyway.” 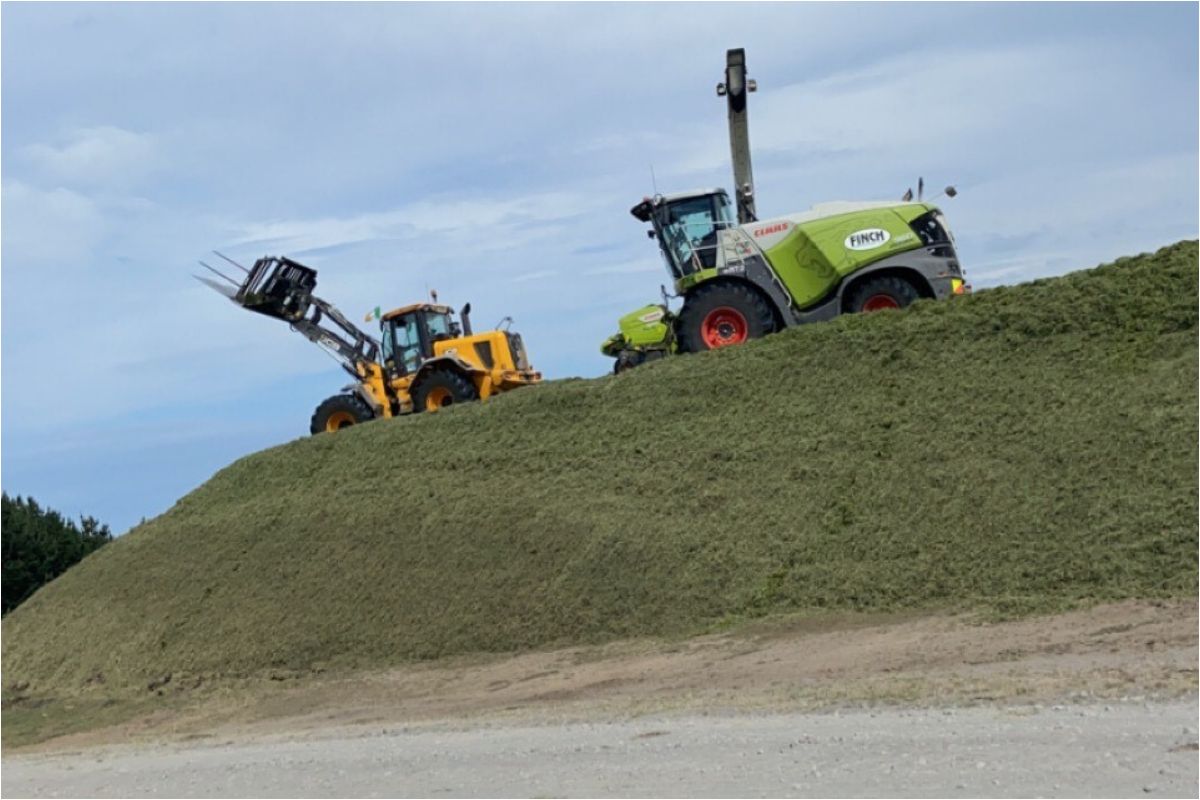 McGrath highlighted that agricultural contracting firms in New Zealand have a formal structure. A harvest manager is responsible for delegating tasks and organising crews, and each individual has their own duties.

“I suppose the biggest challenge they face here is getting the right staff, especially this year with Covid-19. They source staff from Ireland, the UK and throughout Europe every year for the season.”

“I do not have any intentions to go home this year anyway with the way things are with COVID. New Zealand is the place to be as we are not in lockdown. I have a full-time job here, and I am getting my three-year visa as well.”

“I was twenty-four when I came here, and I think around that age is perfect because you are mature. In some cases, younger people come out here and do not last a fortnight – they get homesick.”

“We work in some of the most amazing places and get to see things that are out of this world, all whilst getting paid. It is as close to Ireland as you would get now.” Paudie concluded.

Why are beef prices stable in the UK & falling in...