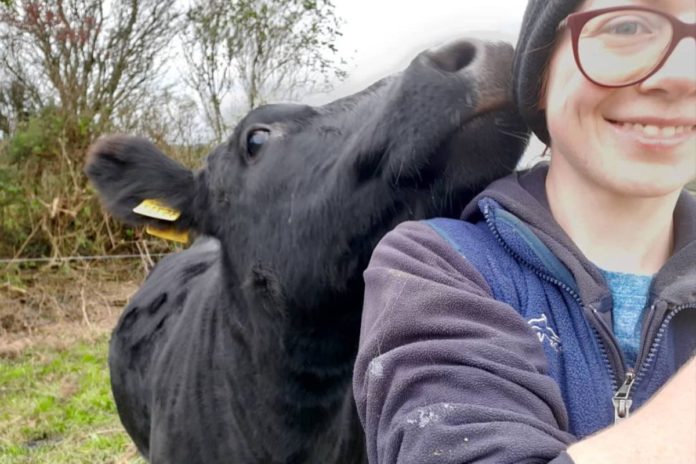 Although the north Cork native has always embraced her agricultural roots, she spent over one decade studying and working in the city.

“In the beginning, I was eased into farming life and helped with various jobs – feeding calves, fencing and other tasks,” she told Catherina Cunnane, editor of That’s Farming.

“I actually just recently found an article that was published in a local paper over twenty years ago; in it, I was asked what I wanted to be when I grew up and I said a farmer.”

“Since then, I have started down a few different paths, but home and the farm are where my heart is.”

The 28-year-old, who completed her Green Cert as a distance education student at Clonakilty Agricultural College, began farming on a full-time basis last year.

“It was a bit daunting for sure as it was a huge change for me. When I moved home, it was calving season, so it was straight into the deep end,” she added.

“There have been challenging days for sure but at the end of the day, I love farming, so all the tough times are worth it.”

Shauna runs a dairy enterprise, alongside her parents, Joe and Siobhan. Last year, they milked in the region of sixty Montbeliarde and Friesian cows, with a view to increasing to approximately eighty this year. Calving gets underway in late-February, while heifers follow in April/May.

The Murphys retain all heifer calves as replacements, while all bulls are sold – the majority of which change hands from the farm, while some late calves go under the hammer at their local mart.

“Working with animals makes me so happy. My happy places are the milking parlour and the calf pens – the calves never fail to brighten my day.”

“I’ve been full-time farming for a year, but I am still lacking a lot of skills and knowledge, and this is a challenge.”

“I know that in time I’ll gain more experience, but it can be frustrating when I don’t know how to do something and end up making an easy job very difficult!” she admitted.

Day in the life

Shauna still works part-time, on a mostly remote basis, so she begins her day by checking emails. “Then it’s milking time/ calf feeding time. After breakfast, I walk my dog and check-in at work again.”

“Then it’s onto that day’s farm jobs – at the moment this includes moving calves, cleaning out pens, tagging calves, updating the books etc.”

“There’s always some job to do, and never enough hours in the day! Before I know it, it’s time for the evening milking and after that, it is time to relax; I love heading to the gym or going for a run.”

Instagram allows Shauna to connect with fellow women in agriculture, who motivate her. “I follow some incredible female farmers on Instagram and it’s great to see women showcasing their skills and showing that they’re every bit as capable as men.”

She believes that the majority of people she has interacted with are happy to see younger people interested in farming – regardless of gender.

The 28-year-old would like to see more women pursuing careers at farm-level and stressed that the physical nature of farm work should not be a deterrent. “If farming is your passion, you should 100% go for it. They shouldn’t be put off by the physical aspect of farming as there are all sorts of resources to help.”

“I think we, as women, bring a fresh perspective to the industry, along with some innovative ideas.”

“Stay true to yourself and ignore anyone who tries to put you down – you belong, and you are totally capable of working in this industry.”
“Man or woman, at the end of the day all that matters is that the work gets done.”

Looking ahead, the family intend to maintain their current herd size to allow them to focus their attention on expanding their parlour and upgrading some buildings.

“My parents do an excellent job of running the farm, and I plan on following in their footsteps and not make any major changes. I love data so was thinking of starting grass measuring to optimize the grazing platform.”

“Growing up, I was never told I couldn’t do something because I was a girl and was encouraged to get involved on the farm from an early age.”

“I might sometimes get funny looks at the mart or farm shops, but I take no notice – I have as much right to be there as anyone.” the young farmer concluded.