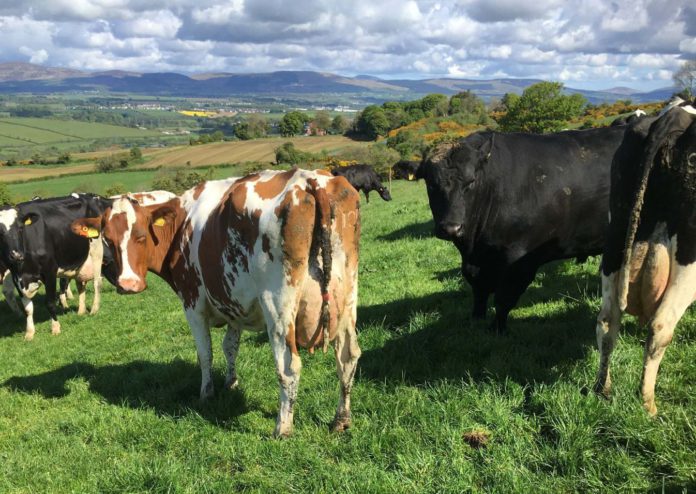 ‘To tighten your calving pattern, remember to remove the bull from cows’

It has been a late start to spring, with low temperatures and poor grass growth leading to delayed turnout. Now is a good time to assess the previous winter’s breeding results in autumn calving herds.

For most autumn-winter calving dairy herds, turnout is often the time the bull is turned into the cows to sweep up those not already in-calf.

Many dairy farmers conduct routine fertility scanning, often on a weekly, fortnightly or monthly basis through the main part of the breeding season.

For those dairy farmers that do not normally scan their cows, after turnout is one of the key times to assess pregnancy status to identify cows not in-calve.

Cows can be scanned from around 28 days after service, and scanning from around 60 days can even be used to establish the calf’s sex.

The majority of cows in autumn-calving herds should now be settled in-calf. A quick analysis of service records can help to establish the conception rate of the herd.

Ignoring cows never served or those served in the last month, conception rate is simply the number of cows confirmed in calf over the total number of services conducted by either AI or natural service.

Conception rates vary widely between herds, typically averaging around 40%, but with the widespread use of positive fertility bulls, together with good nutritional management, conception rates are tending to increase again.

Cows in the CAFRE Greenmount dairy herd are scanned every Friday morning by the local vet during the breeding season.

Before the breeding season

Pre-breeding checks are conducted on cows from around a month before starting the breeding season, which currently begins on December 14th.

Pre-breeding checks are conducted at approximately 30-days post-calving, and cows are scanned again at around 30 and 80 days after service.

While many farmers do not conduct a second pregnancy diagnosis at 80-100 days post-service, (milk sample or scan), this pregnancy diagnosis is important. It helps detect the small proportion of cows with early foetal loss at 45 to 90 days, which would otherwise be assumed to still be in-calf.

While it is good to run a bull with cows to sweep up late-calving cows and repeat breeders, it is important to set a date for his removal each year.

Further tightening of the Greenmount herd calving pattern is planned to reduce the calving season down to approximately 16 weeks in the next couple of years.

Now is a good time to take stock of the breeding season so far since the majority of cows should be back in calve. If you want to tighten your calving pattern, remember to remove the bull from the cows.