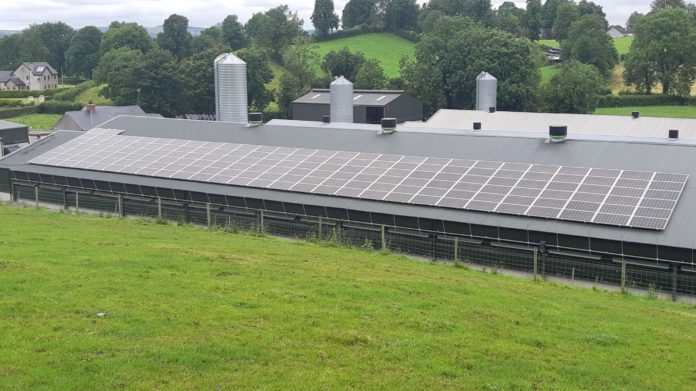 The development of solar energy generation in agriculture has the potential to have three “major” benefits for Ireland’s agricultural industry.

That is what Teagasc told attendees at a sitting of the Joint Oireachtas Committee, which focused on solar energy and the agricultural industry.

It gave an example whereby dairy farmers could generate a conservative estimate of 200-gigawatt hours of electricity if they were to meet 50% of their demand from renewable sources.

This would not require any land use change as it would be housed on existing roof space, the state agency explained.

It then pointed to farm diversification as a second option during its opening address. This, it explained, is income generated from exporting excess electricity will provide “additional” income streams for farm families in rural Ireland and encourage “parallel” income streams from the farm.

Thirdly, the state agency added, “renewable electricity generation is better for the environment, and generation of electricity on farms will help contribute to our national efforts in the area”.

The potential of a high level of adoption of solar PV on dairy farms alone could save 0.13 million tonnes of carbon emissions per year nationally, it estimates.

It made its calculation on the basis that if every dairy farmer installed 26 kWp of solar PV panels it would offset all on-farm dairy energy use nationally.

This is based on 30% of dairy farms installing 50 kWp of solar panels and 70% installing a 17 kWp system.

These are the maximum allowable system sizes for connection to the three-phase and single-phase grid under the ESB networks mini-generation scheme.

It says the level of adoption would generate 435 GWh of renewable electricity per annum. This, it added, is about 2% of the required level of decarbonisation in electricity by 2030.

All of this could be accommodated “easily” on shed roofs, it told the meeting.

Opinion: Farmers will not get credit for adopting renewable energy

- Advertisement -
Previous articleProperty: Residential listings on the market from €35,000-€275,000
Next article‘Significant’ increase in cattle numbers moving north for slaughter

‘There should be no notion of compelling people to buy or...