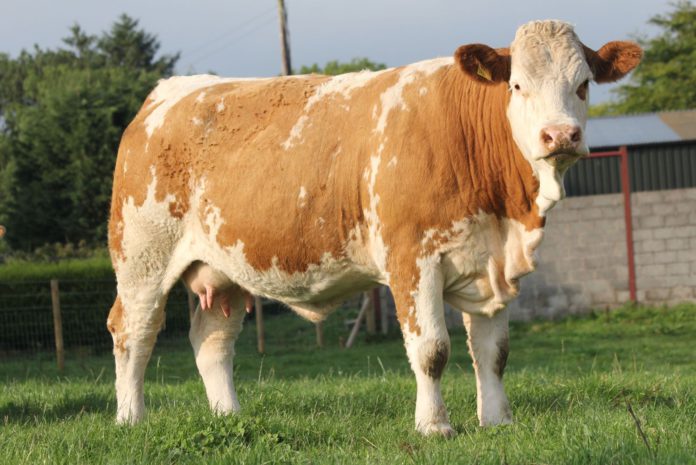 NI-bred Simmentals exported to repeat customers in Switzerland and Germany

The New Year is off to a good start for three Simmental herds in Antrim and Tyrone, who have exported two cows and calves, five heifers and one young bull, to breeders in Switzerland and Germany, writes Julie Hazelton.

This latest export deal was struck with three repeat customers and a new buyer.

It bolsters an upsurge in international demand for genetics, embryos and semen from high health status herds in Northern Ireland.

Robin Boyd from the Portglenone-based 30-cow Slievenagh Herd is the British Simmental Cattle Society’s World Simmental and Fleckvieh Federation representative. He was one of three breeders who shipped pedigree cattle to the continent last week.

“We are delighted to announce another significant export of Simmentals to Switzerland and Germany,” explained Robin Boyd.

“The breed was first imported to Northern Ireland in 1971. Last year, as the NI Simmental Cattle Breeders’ Club celebrated its 50th anniversary, we were brokering a deal to export ten Simmental cattle to the breed’s native homeland.”

He said the dual-purpose Simmental is one of the more influential breeds in the UK, offering both superior terminal and maternal traits.

Boyd believes the latest export is testimony to the quality and consistency of Northern Ireland-bred cattle.

“It gives breeders in Germany and Switzerland an opportunity to tap into new bloodlines from proven bulls and cow families.”

Mr Boyd continued: “It is very pleasing to see that the majority of the cattle are going to satisfied customers Felix Tobler, Christian Bunde and Mario Walther, and new buyer Markus Rahn.“

The initial export almost eighteen months ago was initiated by Flex Tobler, and his son Joel, from Chapelle in Switzerland, who had visited the UK and NI to participate in stock judging competitions organised by the Simmental Young Members’ Association.

“Their enthusiasm fuelled a growing interest in local cattle, which resulted in visits from prospective buyers in October 2019 and January 2020.”

The Tobler family is understood to be the first-ever herd owners to import cattle, of any breed, from Northern Ireland to Switzerland.

This young cow was accompanied by her polled eight-month-old Coose Jericho bull calf.

The March-2019 Slievenagh Krystal was by Shacon Hannibal. This was of the most influential sires at the society’s recent Next Generation Sale in Carlisle.

Also selling to Felix Tobler was the yearling heifer, Slievenagh Molly. She is a polled daughter of Dermotstown Delboy and a twin heifer bred from the first calver, Slievenagh Jasmine.

This heifer’s maternal grandam Slievenagh Buttercup EX90 was the UK’s first Golden Cow in the new register the society launched in 2019.

Lottie was second in a strong class for autumn-born heifers in the NI Simmental Club’s virtual show last year. She was by Omorga Murray and is out of the Kilbride Farm Bantry daughter Slievenagh Goddess, which hails from the Madonna female line.

Lily is by Slievenagh Justthejob, a home-bred homozygous polled son of Kilbride Farm Glenhead. Her dam is Slievenagh Iris from the noted Omorga Daffodil family.

Omorga Moses (P) is from Curaheen Dell. Mr Walther previously purchased from the Omorga Herd in 2020.

Richard and Rhys Rodgers from Portglenone were also part of the 2020 export deal. This time sold a heifer to a German customer, Markus Rahan.

The March-2020 Hiltonstown Lindsay was by the 2014 and 2015 Balmoral Show champion Dertmotstown Delboy. She is out of the home-bred dam, Hiltonstown Grace VG88 – one of 35 cows in the herd.