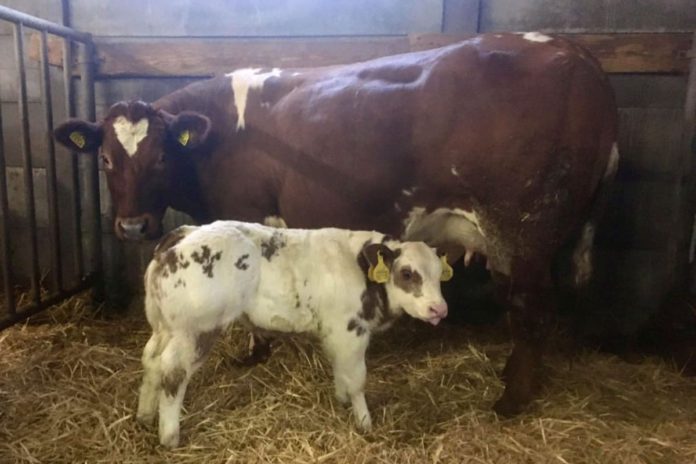 PHOTOS: ‘Roan heifers seem to be topping all the sales’

Kevin McDermott of K2Genetics, a bovine genetics company that operates nationwide, told this publication that he expects that semen from the 1,185kg pedigree-registered bull will be available from mid-June.

He purchased Leonardus van de Uilenvlucht (code available shortly) on the back of interest in Us Heit Van Knedo and the success of roan-coloured breeding females in commercial mart rings across the country.

Speaking to That’s Farming, he said: “Pedigree Belgian Blue breeders contacted me to use Us Heit Van Knedo, but he isn’t a full pedigree. That is part of the reason why I went in search of another Belgian Blue bull, to meet that demand.”

McDermott describes his October-2016-born purchase as a “medium-sized, relatively easy-calved Belgian Blue with plenty of muscle”.

“He is a proven breeder – there has been one crop of calves off him and they are exceptional, with birthweights between 40-48kgs. His second crop of calves are arriving now.”

McDermott has also received a high volume of enquiries from suckler farmers across the island, along with companies in Belgium, which have expressed an interest in distributing Leonardus van de Uilenvlucht’s semen.

“There has been interest from dairy farmers too who are interested in breeding those red-type calves, but we will have to see what calving is like first, before that is explored.”

“Roan heifers seem to be topping all the sales – everybody wants them for cows. They appear to have stronger maternal traits and breeders are satisfied with their progeny.”

“They are interested in using this sire. He carries the red gene – his father and mother’s father were also red gene carriers, so I am confident that the bull and his progeny have a very promising future.” the Donegal native concluded.