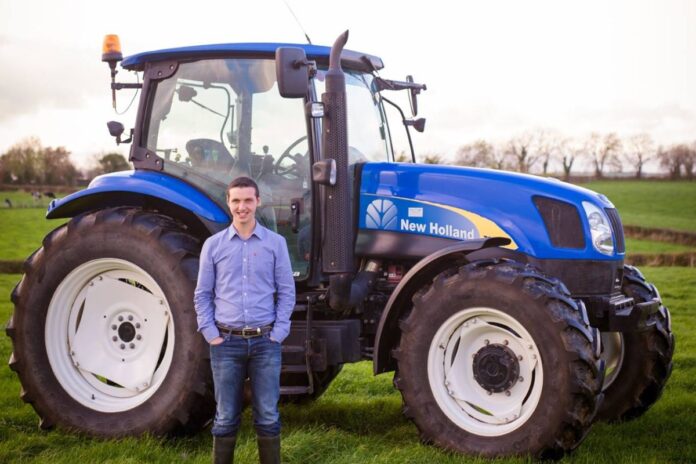 Leaving school at 16 to become a full-time dairy farmer

Stewart is a third-generation farmer based on the family, which was initially established as a pig and potato enterprise.

In the 1970s, Stewart’s grandfather, Bobby, converted the farm to a dairy enterprise. Stewart, alongside his father, Lindsay, operate the dairy farm.

The herd consists of 120 dairy cows, supplying milk to the local Lakeland Dairies.

“Initially, we milked Friesian cows, which began to breed with Holstein bulls. This gave us stronger cows which milked well and had greater longevity,” Stewart explains to That’s Farming.

Mountview Dairy continued to use Holstein bloodlines until they reached a point whereby all animals were pure-bred Holsteins.

However, they shortly realised that they were harder to manage and did not prove to be strong or long-lasting.

“Three years ago, we decided it was time for us to try something new. Since then, we began cross-breeding with Fleckvieh. The first batch of our Fleckvieh-cross heifers are due to calf this autumn. We are looking forward to seeing the outcome.”

The herd operates a mainly autumn-calving enterprise, with a few later cows calving through to March.

“Our breeding season begins on December 1st each year, with now almost exclusively Fleckvieh or Holstein bulls. We do not utilise sexed semen.”

“Calving season commences in September, with the majority of calving taking place from September to November. For our enterprise, this is the preferred time for calving as the new mothers can stay indoors all winter.”

“This allows us to provide the females calving down with constant, high-quality feed which they would not be receiving outdoors due to our ever-changing weather conditions.”

“When we are selecting animals for breeding, strong, long-lasting, not too tall or too broad, are the main traits we seek in our cows.”

Moreover, they retain bull calves on-farm until they are between two/three weeks of age.

They sell the majority of bull calves to returning customers and take remaining calves to the local sales yard.

“Our heifer calves are retained as replacements, and we aim to calve these females at 22 to 24 months.”

“We established 33 single calf pens for the newborn calves, and at two to three weeks, the heifers are then grouped into larger pens,” Stewart tells That’s Farming. 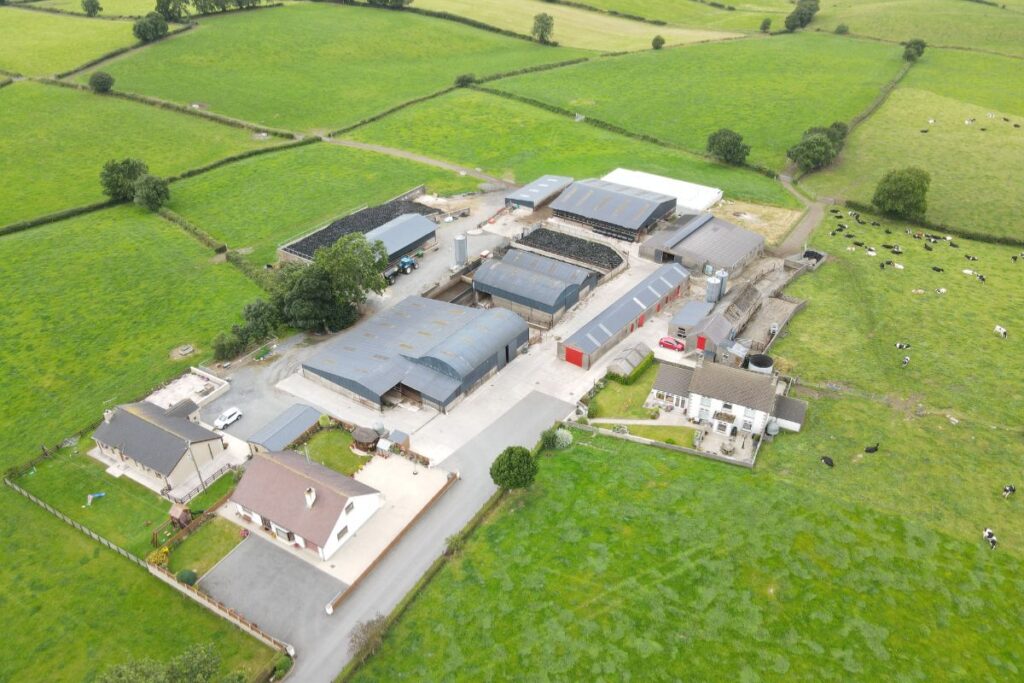 “Our average milk yield last year was 8,500 litres per cow, which is 360 litres less than our previous year’s report.”

Furthermore, the dairy enterprise has achieved a butterfat figure of 3.96% and protein of 3.23%, respectively.

On this farm, grassland management is of “serious” importance. In turn, soil quality is monitored by soil sampling every winter,.

The fields are used for grazing by a local sheep farmer in the winter period. The sheep eat the old grass, so the cows can reap the benefits of the fresh grass in the spring.”

“When summer commences, we mow the grass ahead of the cows being let into each field, which we find leaves the field much cleaner. The cows eat all of the pre-cut grass, so we do not have to top the fields afterwards, which leaves grass laying in the field.”

“We mow two cuts of silage, with the first cut being harvested in May, followed by the second cut in mid-July. The silage goes into pits, with a small portion of silage going into round bales.” 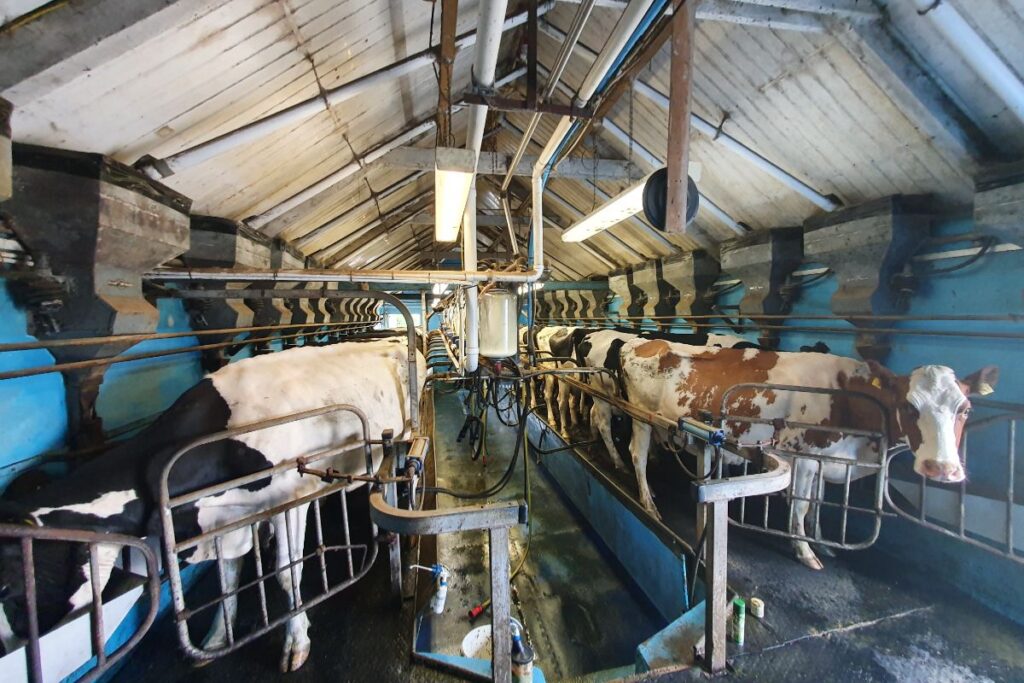 At present, they use a Fullwood 12-point swing over parlour. We milk twice daily, commencing at 6am and 4.30pm, with each milking lasting for approximately two hours.

During summer of 2021, they built a new slurry tank for extra slurry storage as we previously had to hold slurry in a neighbour’s tank to store all.

Mountview Dairy Farm plan to build a shed on top of the tank next year, which will have space for an additional 50 cubicles and some calving pens.

Recently, the dairy farm introduced a Holm & Laue milk taxi, which was purchased in 2020.

This piece of technology has the capacity to hold 150 litres of milk. The milk taxi has a water heater which is set on a timer to be at the right temperature when needed to make powdered milk for calves.

The technology dispenses the correct amount for each calf. Stewart believes this equipment has made feeding much easier, and also reduces the requirement for manual labour in the calf shed.

The Gracey family are members of a Business Development Group (BDG), which consists of approximately a dozen dairy farmers who meet at the end of each month to discuss differing farming techniques and ideas. 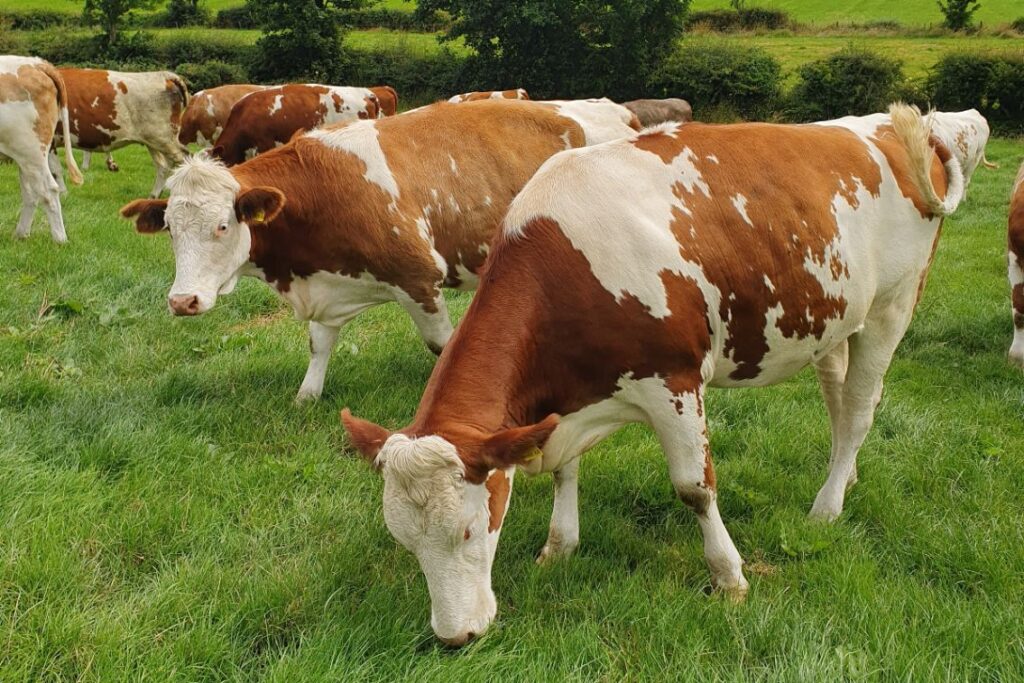 “My biggest challenge to date was keeping the farm going on my own last winter. My dad had a bad fall down into the new slurry tank before the slats were put on top.”

“He broke his leg badly and was out of action from the end of October until well into the new year. The whole family had to help out during this time.”

In turn, Stewart expresses his frustration at the excelling price of fertiliser, which has hit many farmers across the nation.

“We have sown the same amount of fertiliser as normal this year to keep the grass growing, so although the price has rocketed, we are not prepared to use less. We depend on milk prices to stay up to pay for it.”

“The thing I like most about dairy farming is spending lots of time outside. I enjoy working with animals and watching the next generation of heifers coming on each year.”

“My short terms plans are to get the new shed built on top of the tank. Moreover, my long-term plans involve increasing the herd to around 140-head and shortening the calving season to have calving commencing in September and finishing in the new year.”

Stewart left school at the young age of 16-years-old and has been working full-time as a dairy farmer since.

“I can say that I really cannot imagine doing anything else with my life. Although it is a lot of hard work and very long hours, it is rewarding.”

“I married my wife, Hannah, seven years ago, and we now have a house on the farm where we live with our two children, Bobby, aged 3, and Leah, aged 1.”

“Bobby is following in my footsteps with his love for being out on the farm, and Leah gets very excited when she sees a tractor.”

He concludes, “I am looking forward to seeing what the future holds for the farm”.