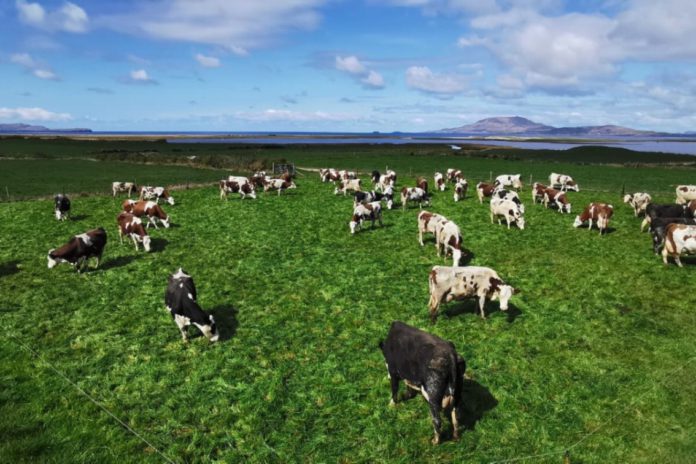 Richard Austin grew up on a dairy farm in Summerhill, County Meath, which milked over 80 Holstein Friesian cows, run by his brother, Jimmy.

In 1986, aged 19, Richard moved to his uncle’s farm to assist him, who milked a 20-cow Holstein Friesian herd in Louisburgh, County Mayo.

In 1992, he inherited the farm following his uncle’s passing, who suffered from a heart attack.

He and his family took regular holiday breaks to the county to visit their late uncle.

Richard milks 60 Montbéliarde cows under the Colony prefix, of which 50 are pedigree, and ¾bred Montbéliarde. The farm is 42 hectares in size, with an additional 30 hectares of forestry.

“I grew up knowing nothing else than dairy farming from a very young age,” Richard, married to Lorena with two children, Liliana (8) and Dara (10), told That’s Farming.

“I was heavily involved in the day-to-day work on the home farm in Meath. I was milking cows from a very young age and feeding calves. So, the interest in livestock started from that point of view.”

“We always knew calves from mothers to grandmothers of the stock we were dealing with from a very young age, so that nurtured the breeding interest in me.”

Richard felt Holstein Friesian were “super cows” and milked well for him, but were not fitting into a 12-month system because of poor fertility.

He enquired about the Montbéliardes, having seen a neighbour with the unique breed.

“In my view, Friesians were getting a bit milkier and leaning towards a lighter type without going down the road of crossbreeding.”

“Even 20 years ago, there was good publicity surrounding new Zealand breeding with Kiwi-cross or Jersey-cross breeding. While there is a lot of good things about that, I did not fancy it.”

He gradually moved his herd to Montbéliarde cows and expanded from an initial 40 females.

In 2007, he established the Colony herd by importing 18 springers from France, thirteen in 2007, and a batch of seven and five in 2008. He later sourced six breeding heifers in Ireland.

The Mayo farmer found an opening to expand his herd through land reclamation works, which meant he could carry more livestock.

“Their fertility and longevity were so good I did not buy any cows since. Instead, I have increased the herd size only using my best cows to Montbéliarde semen.”

“Any Montbéliarde females I bought that did not rate good enough to continue with breeding-wise are put in-calf to Belgian Blue or Red Angus.”

“They were fine to milk as long as they were there, but I would still only breed from the best cows, whatever breed they were.” 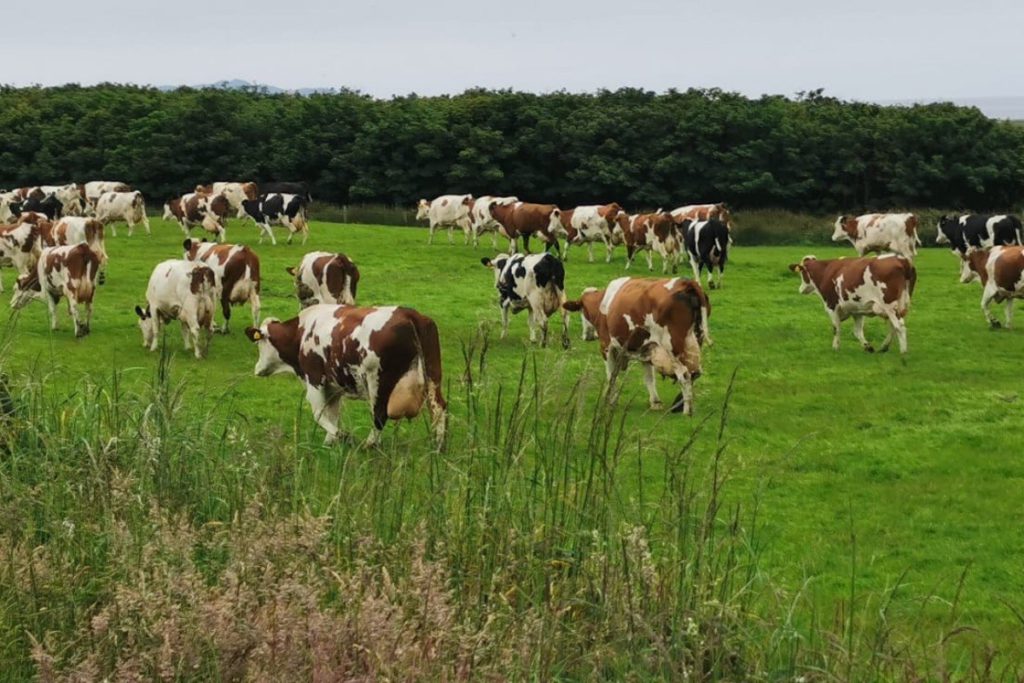 He achieved these concentrate figures with 1 and 1/4T of concentrates.

He housed cows on October 20th, and they remain full-time on silage.

“The six-month winter is a crucial factor here. It does not matter how big or small the cow is as I am going to have a 5-6 month winter.”

“I need a cow that is going to produce. I cannot turn a cow out early, leave her out late, carry her cheap and take what I get as profit. That will not work down here with such a long winter.”

Richard uses all AI from May 1st on dairy cows over 12-weeks and a Red Angus stock bull, Colony Red Leo (out of Iron ore), with heifers.

Richard used to introduce a stockbull to the pastures with dairy cows after six weeks of AI, but he did not use him due to good fertility levels and 70% conception rates in the last two years.

The farm utilises (AAA) classification tool for sire selection on their cows with better females AI’d to a Montbéliarde straw.

He uses Belgian Blue on cows when they get to a certain stage and will wean them out of the herd.

“The cows would be fit for Limousin or Charolais. I do not use them, sires, because they have a long gestation.”

Richard qualified as a DIY AI technician through Dovea Genetics and finds it convenient to control his AI protocol.

He does not use sexed semen as he claims the farm has valuable bull/heifer calves and a low replacement rate.

“Sexed-semen is a solution to a problem that your dairy bull calf is worth nothing. That is something that should not have been let happen at all. It works on paper, but it is not sustainable.” 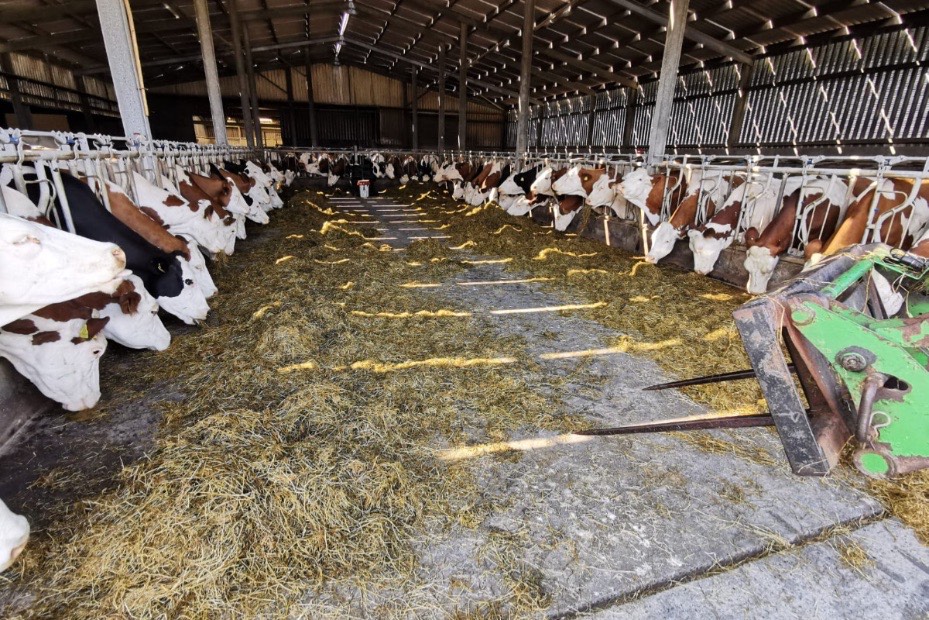 Calving commences in February, with 50 cows calving before March 16th and the remainder by the end of April.

He assists only 3-4 cows per year as the cows calve on their own in a loose shed with strict night feeding to eliminate calving at night.

“I do not chase targets for the sake of it. I learnt not to be too economical with a cow; there are many other ways she can pay you back.”

“For example, she will pay you with better health, fewer side effects, good fertility, and good production figures.”

“I have lost no cows with calving or injury in the last three to four years.”

“I do not aim to calve too early in the year. I might even delay another ten days before AI because my fertility is so good.”

“It is a typical spring-calving system to be able to make the most of grass. I do not aim for January calving because I have them in too long, and you would be trying to get too much milk off silage.”

“I used to be calving later, and then I moved forward to bring the females forward because I had too many stragglers”.

“Now, that there going in-calf well and it is very compact, I can probably back off a little bit.”

The herd’s calving interval is 361-days, with all cows dried off before Christmas and heifers a month earlier.

He outlined why he chose to calve down up to 12 Montbéliarde replacement heifers at two-years-old.

“Three years is too long, and with spring-calving one time of the year, it is either two or three years.”

“If you are calving all-year-round, it is nice to have them at two-and-a-half years old; it is a good balance.”

“I have a particular interest in Red Angus heifer calves out of Montbéliarde cows for selling as suckler calves.”

“Suckler farmers love them for breeding heifers. I have a small herd of pedigree Red Angus cows that I breed my stock bull from and sell breeding stock from.”

“Commercial Angus and Belgian Blue bulls are sold as suck calves off-farm. I keep the better Montbéliarde bulls for selling at 15-months as stock bulls to other dairy farmers.”

He sells his cull cows for in the region of €800 at Balla Mart – depending on mart prices.

“A high somatic cell count cow does not necessarily have to go to the factory if she is well sought-after by suckler farmers. So, I try to sell them in-calf as well and get more out of them that way.”

“I often like to do that, keep a younger heifer and a good replacement rate; otherwise, cows get too old.”

Richard and his neighbour own a wrapper and baler together, which assists them in choosing silage cutting dates in line with their farming systems.

“Unfortunately, with climate and land type, I can only utilise grass for 6-7 months, which makes it a more costly place to dairy farm than other parts of the country.”

“It is what it is, and I have to work with what I got, as does every other farmer.”

“You try to work with the efficiencies without pulling the rug from under anything, which is very important. But, on the other hand, you cannot try too hard with efficiencies.”

His uncle used a 4-unit herringbone milking parlour, but it reached its “sell-by date”.

Milking takes place, twice-a-day, taking between 90 to 110 minutes per session.

“The first day of that new parlour, I was milking 35-40 cows, so it seemed a bit too much, but the right thing to do was put all the units in together.”

“I close cows away from silage during the day in that calving shed and only give them access to silage at night.

Richard outlined the challenges he faces in the field.

“I do not see it is an industry for someone who wants a fast reward for their work; it does not work like that.”

“I find it is challenging that the better you get at dairy farming, it seems to be more work to maintain a living at it, and you have to continue to try to get blood out of a stone.”

“Because we are not getting milk price increases in keeping with inflation for the last 30 years, you continually have to get more efficient or bigger, or your income reduces.”

“I find because you get busier and busier all the time to make ends meet, balancing work and family, e.g., are all harder to manage.”

“I have been very lucky locally to get to train up good labour and part-time help, of which is second and third-level students.”

“Labour is a big problem for dairy farming in the future.”

“It is a struggle for me if you cannot get labour, but it is also a burden on the family and social life of them because if you are tied, they are as well.” 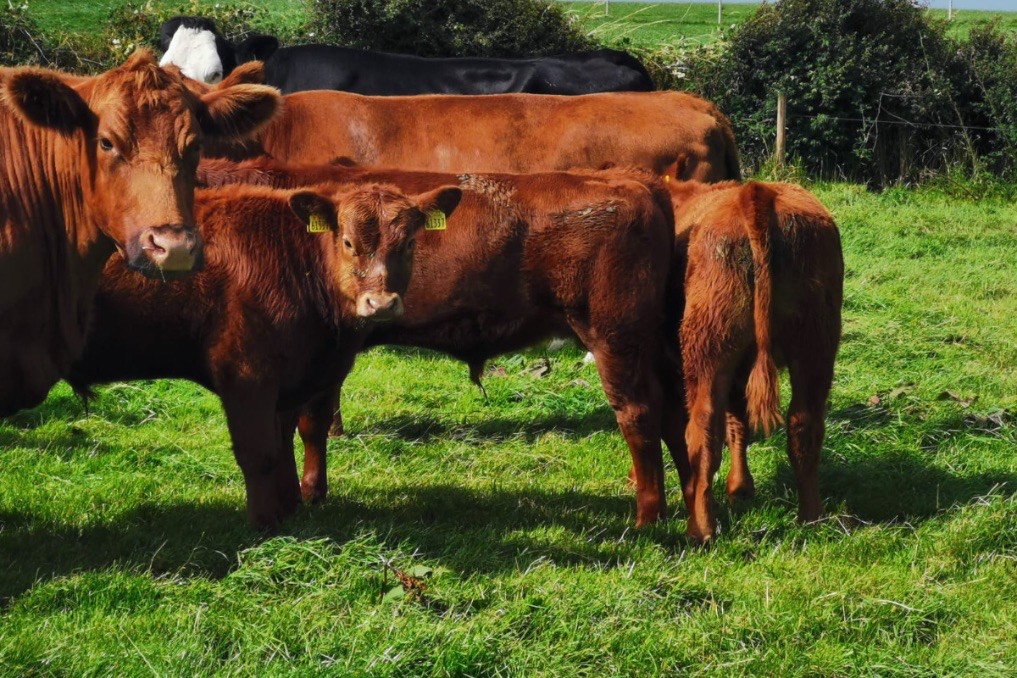 During different chapters of his farming journey, Richard questions getting tied up with bank loans and completing farm developments if the return continues to reduce.

He continues to “worry about the investment in dairy farming I have put in and the possible waste it could be if he was no longer in dairy farming.” “I cannot milk cows forever.”

“If I had any message to give young enthusiastic dairy farmers, it would be let things evolve more naturally on the farm, rather than chasing targets, trying to get big too quick, and try figure what it is going to leave you and with what in many years in the future.”

Richard hopes he and Lorena, who also works off-farm, have “enough” money to put their children through college and can retire later.

The Montbéliarde cattle breeder outlined his view on the future of Irish dairy farming.

“The future for dairy farming is more cows per farm, and possibly more to be got in efficiencies.”

“More cows is more work, and as prices have proven not to increase with inflation/living costs, it is going to be more work to stay viable.”

“I do not agree with the limitless and blind expansion that is happening over the last 5-10 years; I think it is nuts.”

“It was important milk quotas went when they did, but they should have opened up more with a little more control leaning towards more younger farmers.”

“We need more younger farmers, but individual farmers taking over parishes, depending on foreign or cheap labour to milk cows at a minimum cost to make returns to the bank for the dairy output and social-economic welfare of the community is devastating for rural communities,” the dairy farmer concluded.

Do you have Montbéliarde cattle? To share your story, email Catherina Cunnane, editor of That’s Farming, – [email protected]