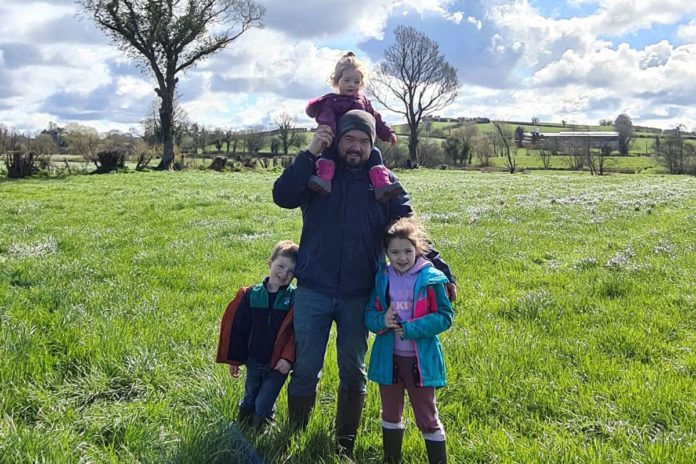 ‘I would like to increase to 12,000 litres without letting fertility slip’ – 150-cow farmer

In this week’s dairy segment, That’s Farming profiles, Dale and Vicki Byers of the Legendairy Holstein herd. They discuss expanding from 40 to 150 high-yielding cows, housing the herd all-year-round, using 100% AI, and purchasing land.

Dale Byers and family have transformed what initially was a small beef unit into a 150-strong high-yielding dairy farm.

Dale’s grandparents lived on the holding, running a small beef unit, before his father, Mervyn, converted to dairying in 2004, with a herd of 40 Montbéliarde cows.

At the age of 21, Dale took the enterprise’s reins six years later and has, over time, increased herd numbers to 150 and turned the farm into a pedigree Holstein herd registered with Holstein UK.

He runs the Legendairy Holstein herd, with his wife, Vicki, in Ballinamallard, Co Fermanagh, Northern Ireland.

“Dale has always farmed and grew up with farming, whereas I did not. We met at school, and if I wanted to see him, I had to learn how to milk a cow or sit in a tractor. At the age of 15, this was the life we lived, school during the week, farming at the weekends,” Vicki explained to That’s Farming. 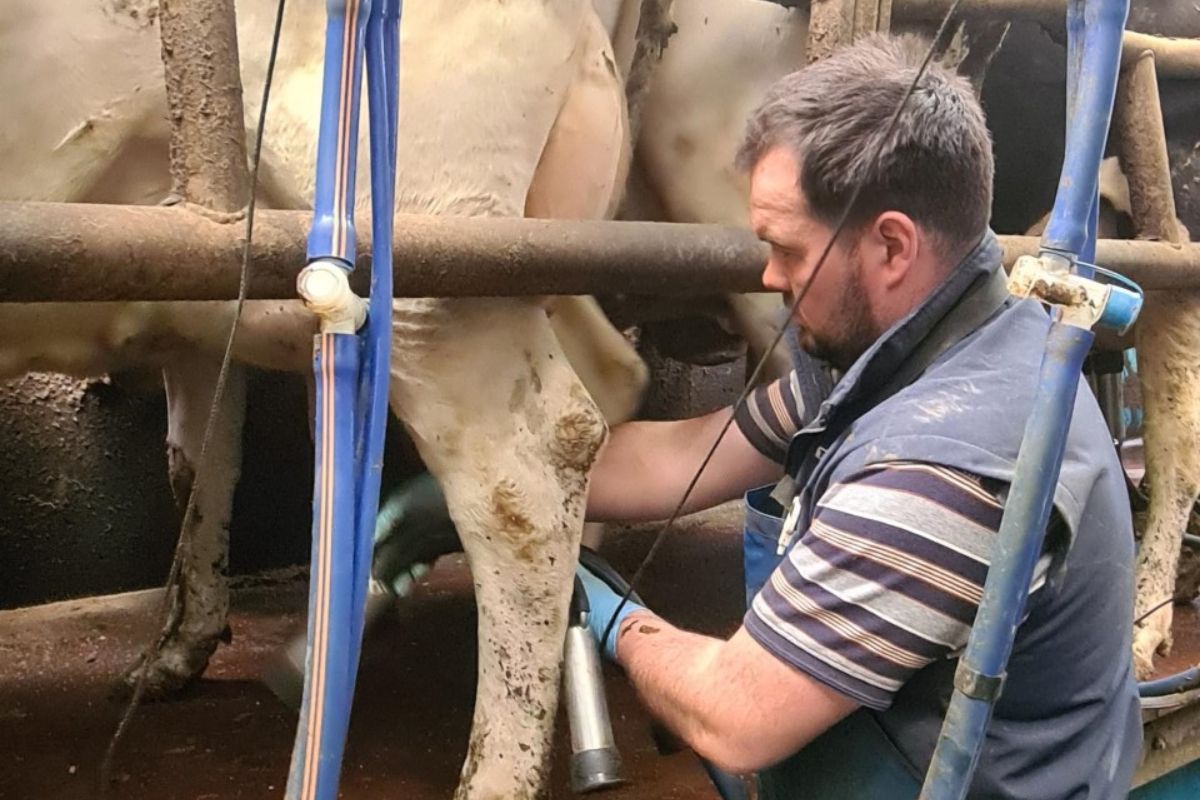 “After having Ina-Grace, I cut down my job to a two-day week to help more on the farm and have a better balance with the children.”

“It very much is a family-run farm; we all chip in as hard as it can be at times. I have taken on the rearing of the calves. We use single and group hutches based outside in a roofed area. The kids and I help Dale during the day with mid-day milking, and I do my fair share of night milkings.”

“Dale does the whole day-to-day running of the farm himself solo, including milking, feeding and DIY AI. He ropes in his brother-in-law’s help with silage season to lift with the wagon.”

“He mows his own ground and contracts out the rowing. We have two night milkers for relief named James and Bobby,” she added. 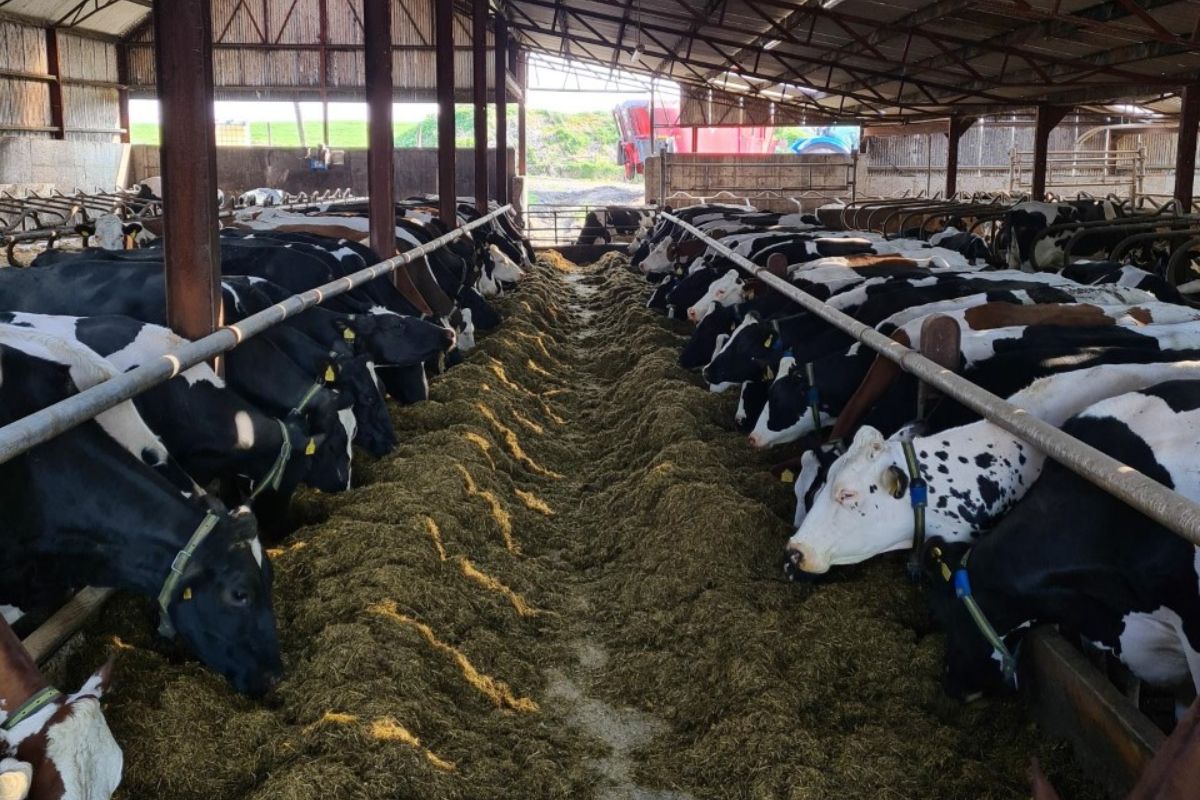 The family farm their 150-cow herd (primarily Holsteins with some Montbéliardes) across 300-acres (which includes leased ground). When extra land came to lease right next door, Dale increased the herd as he then purchased more ground last year. 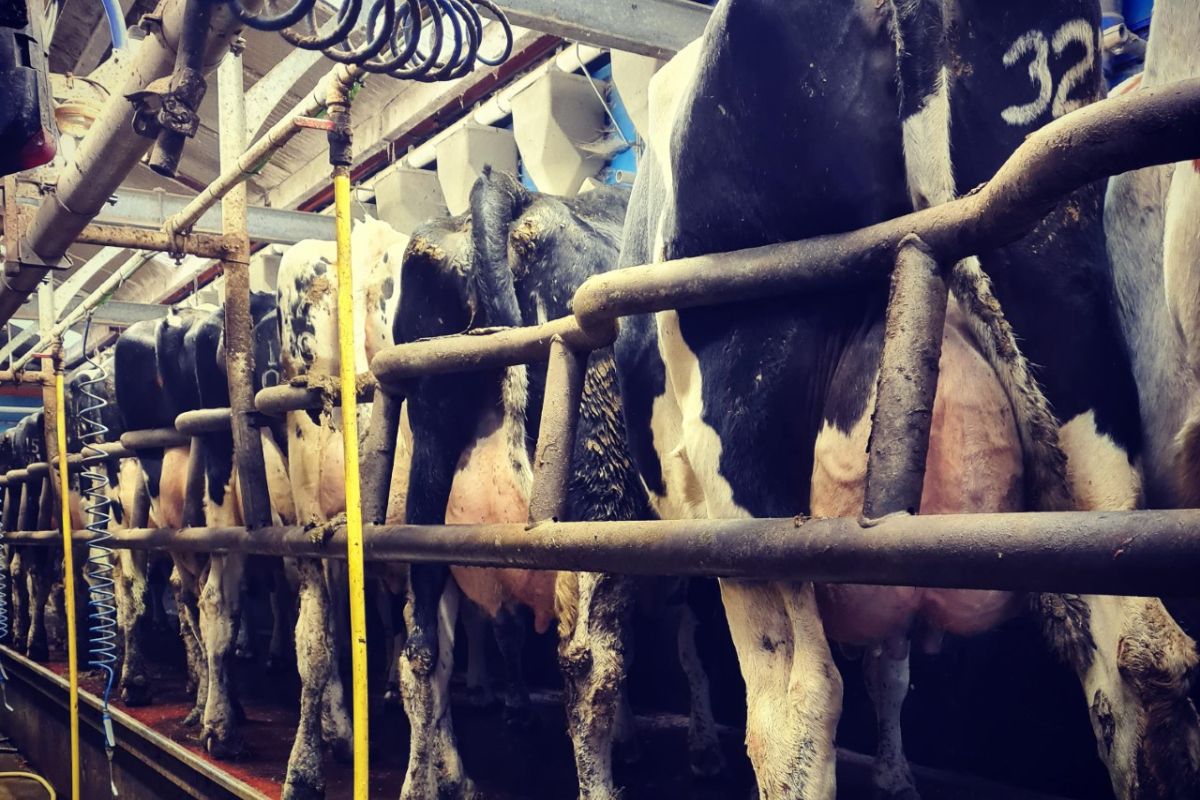 The Byers operate a fully indoor unit with TMR fed year-round, having moved to this housed system in 2012. Dale felt this change would give a “tighter control of feeding and would allow me to provide more consistency in the cows’ diet”.

Since this, he has noticed that the herd’s milk yield has increased; however, he also attributes this improvement to taking control of all stages of the farm’s multi-cut silage system.

“Now we are cutting four times a year, starting the first week of May and then cutting at five-to-six-week intervals,” Vicki explained. 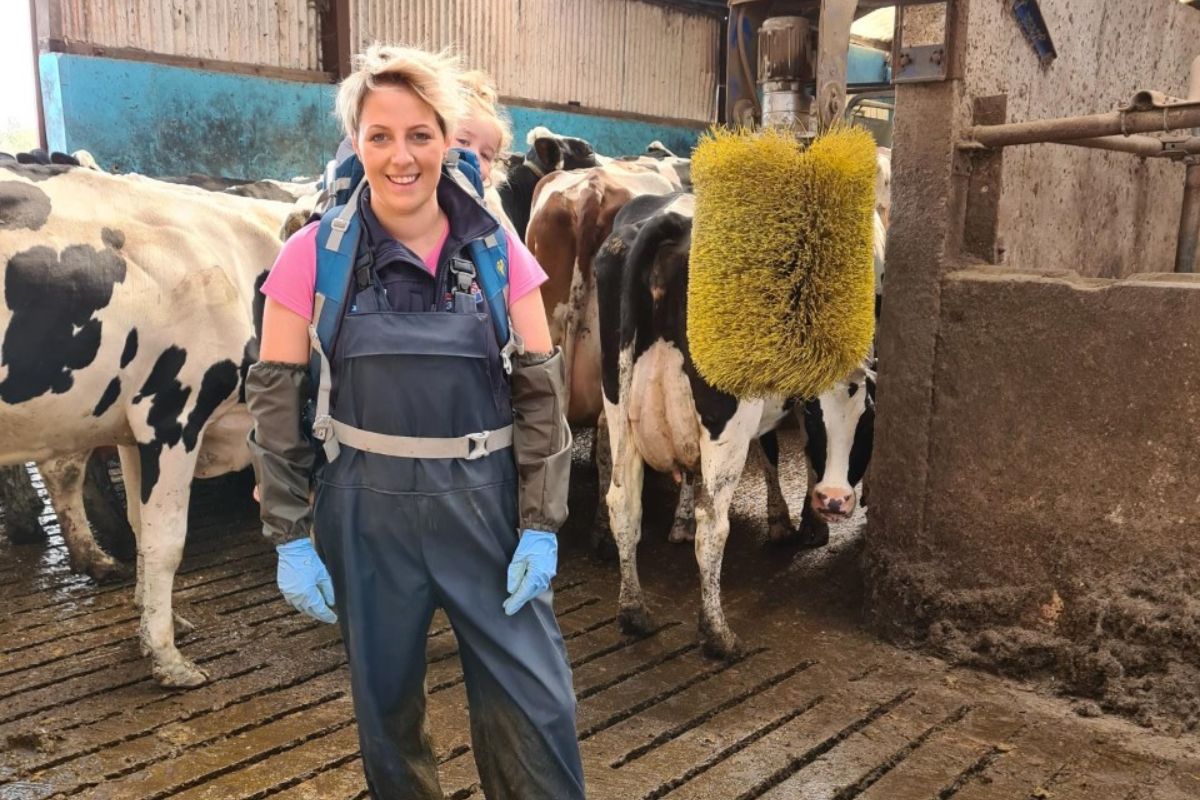 They calf 70% of the herd in September-October and the remainder in early spring.

“Dale prefers not to be calving in the busy summer months. We keep our cows indoors all year round. We have a roofed outdoor calf house with fifteen single hutches and six group hutches Teemore Engineering supplied. All cow sheds have cubicles and mattresses. Besides, we utilise heat detection collars and GPS for sowing/spraying.”

“We milk three times a day through a 16-point swing-over DeLaval parlour at 5:30 am, 2 pm, and 9 pm. Milking takes 1.5 hours. We upgraded the parlour three years ago, and the pit has been left to extend to a 20-point.”

“Besides, we keep all heifer dairy calves and rear them and sell all commercial calves. Furthermore, we calve heifers down at 24 months to keep the calving pattern tight. Currently, our herd’s calving interval is 386 days. We use 100% sexed semen for the first three weeks of the breeding season,” Vicki added. 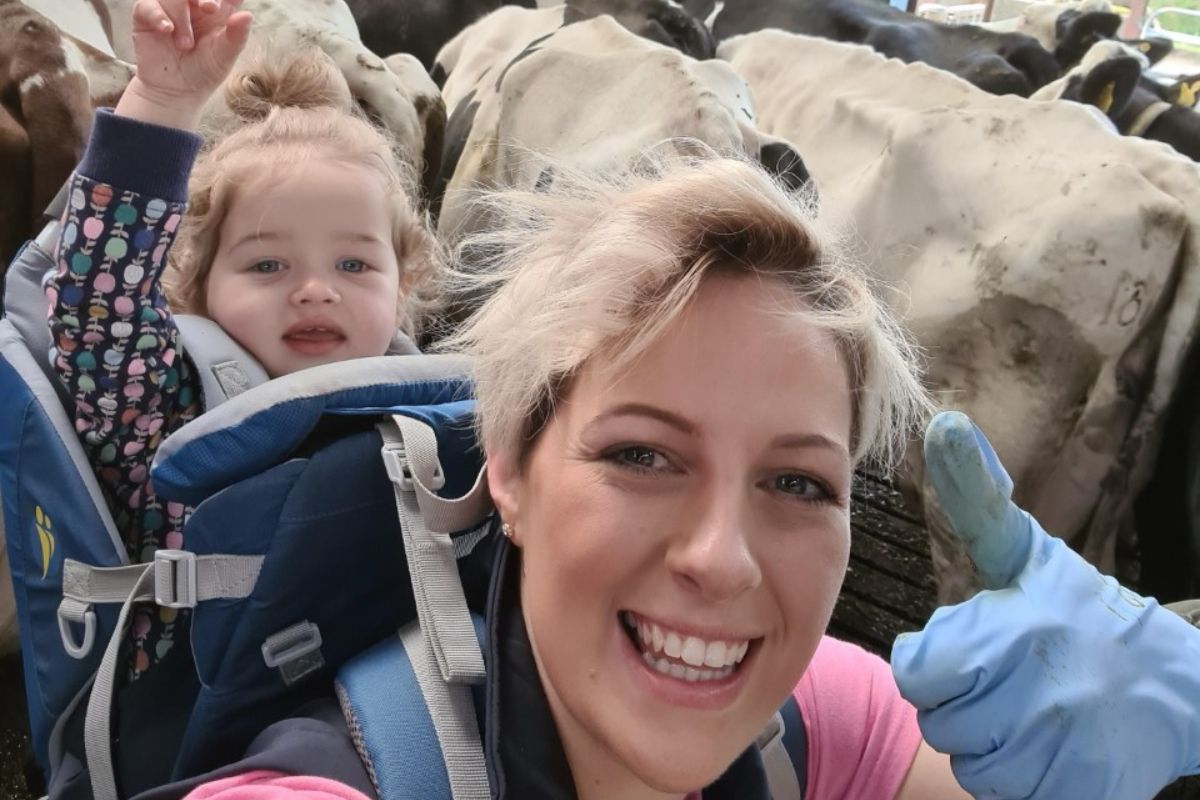 Reflecting on the journey he has undertaken, Dale said: “I have increased cow numbers from 50 to 150, doubled the yield, put in a new milking parlour and bought a 34-acre farm that lies into the farm.”

“Each year, I like to improve the herd’s performance. I will try to get better before I get bigger. I would like to increase to 12,000 litres without letting fertility slip,” Dale remarked.

“It is rewarding when you see genetics paying off. The weather and balancing farming with family when dairy farming can be 24/7 can be challenging.”

“With dairy farming, you get out what you put in; you reap what you sow. It isn’t all sunshine, but there is no other job I would rather be doing with the family. Rearing children on a farm is the best life for them and me,” Dale of the Legendairy Holstein herd concluded.

- Advertisement -
Previous article
PHOTOS: 24-acre holding ‘suitable for any farming practice’ guiding at €240,000
Next article
Bullocks to €1,800 at Headford Mart