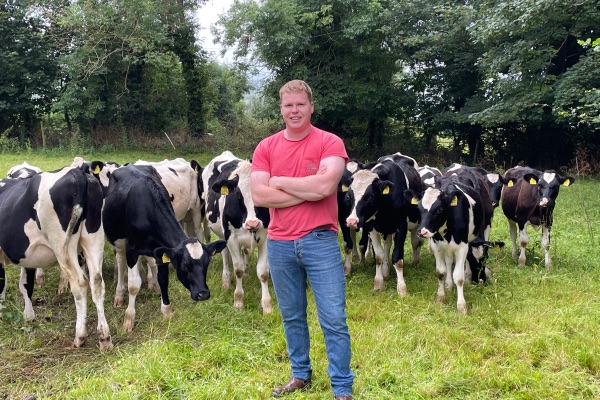 In this week’s dairy farming segment, That’s Farming, speaks to Kerry farmer, Eoin Lyons. The former milk recorder (23) discusses his move to become a full-time farmer, pushing performance, and why he believes Irish dairying is at a “crossroads”.

The farm, now passed onto Eoin, has been in the family for three generations. The family have always been dairy farmers since moving to the current holding in Kielduff in 1961.

The herd has expanded in the past two years, increasing from 80 up to 110 cows.

“Since my decision to come home full-time to the farm, we decided to increase cow numbers to make it feasible, allowing a second wage on the farm,” the 23-year-old told That’s Farming.

“Good milk prices this year has allowed me to leave my part-time job as a milk recorder.”

They farm Holstein-British-Friesian-cross cows across their 130-acre milking grazing platform. This is a winter calving system – a liquid milk system.

Eoin selects these bulls based on milk yields, fertility, and health.

“We breed heifers to AI bulls with an emphasis on easy calving Holsteins bulls. A Holstein stock bull runs with the milking herd for the summer.” 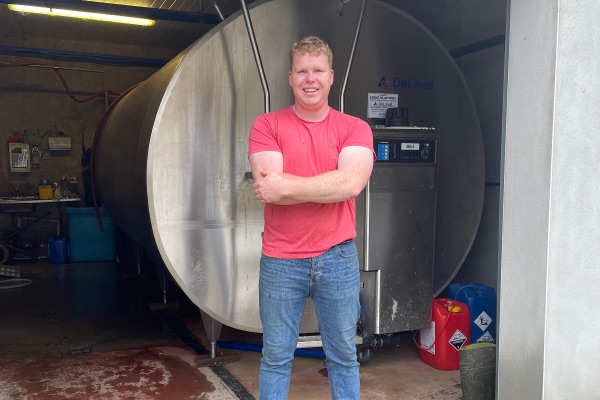 Calving commences in October until near to Christmas and restarts the first of January, finishing at the end of April.

“We begin calving in October to have the cows milking for the liquid milk period.”

The family keep all heifers as replacements, calving these between 24-30-months, while selling all their bull calves between 3 to 4-weeks-old. 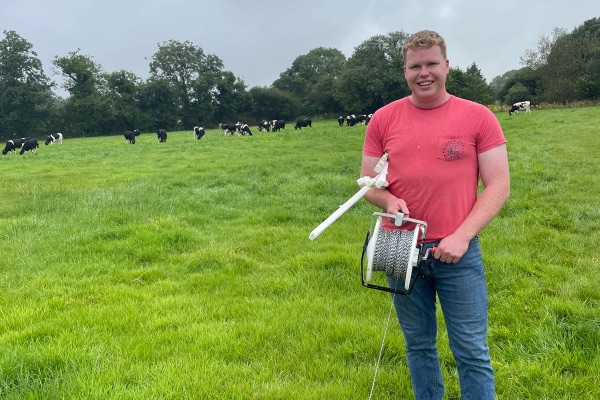 “This is something that we have not focused on, on the farm; so far, we work on the assumption.”

“Once there is grass ahead of the cows, we are happy, but it is something I am thinking of putting a lot more effort in the coming year,” Eoin revealed.

They intend to put Pasture Base “to good use and start making the best use of grass wedges the app provides”.

There is cubical space for 110 cows with a single pen calf house with space for 20 calves and straw bedded sheds for calving cows and groups of calves.

Their milk their 110-cow herd through a 16-unit DeLaval parlour.

“We have recently put in a refrigerated tank which was a massive change for us. We were taking the milk to the creamery with a mobile tank.”

Now, they supply milk at much lower temperatures with “no stress of making the creamery on time”.

They record all their calvings and remedies through the Herdwatch app, which has been “a big help for recording and inputting data on the go”. 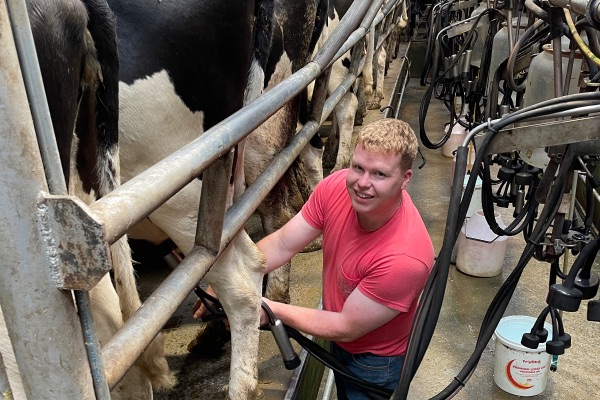 “Dairy farming, for me, is one of the best jobs in the world. Working outside every day, caring for animals seeing them thrive and breeding off them to see a better generation afterwards makes it all worthwhile.”

“There are good and bad days, but the good most definitely outweighs the bad.”

“If you are happy to get out of bed every morning, you are on the right path in dairy because you would not do it if you did not believe in your right career path.”

“I wanted to farm since I was a young child, and I am happy to have taken on the farm.” 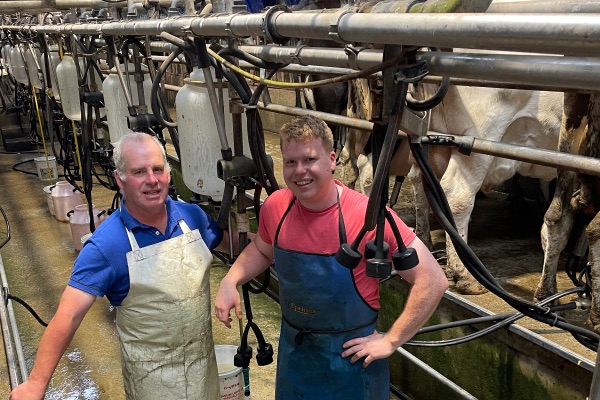 Future plans for the farm

“There is a lot of work to be done yet on herd performance in the line of breeding for more milk and better solids,” Eoin admitted.

Over the coming years, they would like to increase the size of their herd to 150 cows.

“We must improve infrastructure in the coming years to keep up with herd growth, such as a new slatted unit with cubicles.”

“Ideally, the preferred production figure I would like to achieve would be a cow averaging 8,000 litres with 3.70% butterfat and 3.40% protein.”

The future of dairying

In Eoin’s opinion, “the future of Irish dairying is at a crossroads”.

“As I see it, there are talks of cow quotas and cutting the country’s carbon dioxide emissions. So, I think the place of the low input; low output cow could come to an end as we will need fewer cows to feed the same amount of people.”

“I think we will be left looking at a more intensive farming system like the Dutch, perhaps looking down the route of a TMR system.”

“It will be hard to balance that with Ireland’s image for grassland dairy farming. Hopefully, the family farm continues in Ireland.”

Eoin believes another “pressing issue” in farming for the coming years is the shortage of help.

“I spent two-and-a-half years as a milk recorder for Munster Bovine, meeting farmers every day. There are a lot of men out there tired from working day in, day out as they cannot find help to take a day off.”

“As an industry, we need to find more ways of encouraging young people into farming with maybe the likes of more school tours to farms to get young people interested at a young age so they may consider farming as a career in the future,” Eoin concluded.

Are you a dairy farmer? To share your story like this Kerry dairy farmer, e-mail: [email protected]