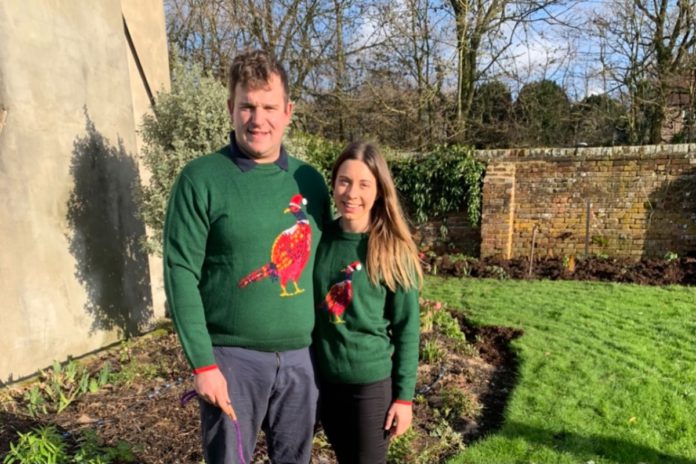 In this week’s dairy segment, That’s Farming, speaks to Joshua Fincham and Lauren Pincombe, first-generation farmers, who run a 280-cow autumn block calving dairy herd, which is on target to reach 6,500 litres/cow this year.

Just under 300 Friesian-crossbred cows originating from Ireland have been instrumental in Joshua Fincham’s and Lauren Pincombe’s success.

The couple resides in Dorset, UK, where they contract farm an enterprise owned by Guy and Anne Trehane. Both Josh and Lauren are first-generation farmers with no immediate family history of farming.

Josh began his journey into agriculture at the age of 14 with a Saturday job on a pig farm. Subsequently, he has worked his way up to become a farm manager and is involved in part of a contract farm agreement on a dairy farm, with his own limited business.

Lauren has trained as a vet and, since graduating, has remained working on the farm as a herd manager and on-site vet. 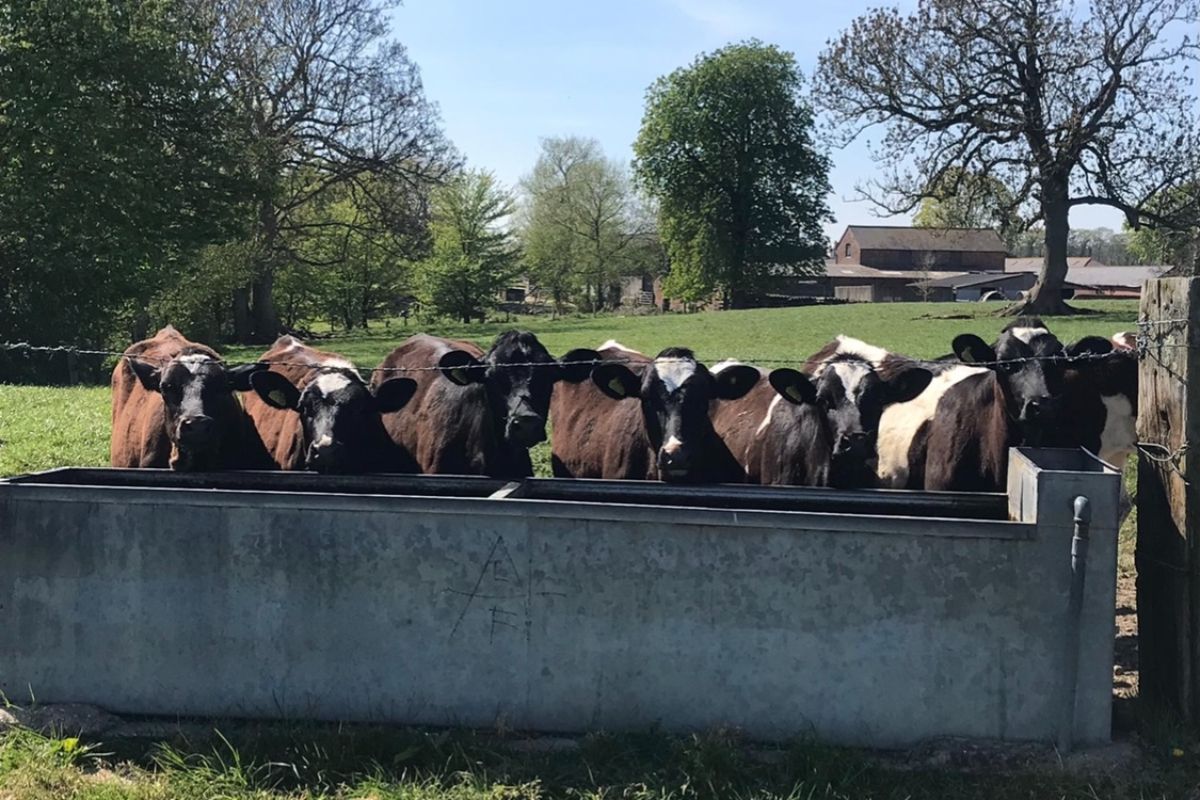 The couple milk 280 cows at peak on their Hampreston Manor Farm.

In 2015, Guy and Anne Trehane decided to venture into contract farming. They originally had was reportedly had what was the oldest closed herd of pedigree Holsteins in the country (the herd was 103-years-old), but jointly decided to sell the existing herd to “make a more profitable system”.

“To do this, we bought 260 Friesian crossbred cows over from Ireland. Over the last few years, we had increased the herd size to peak at just over 300.”

“However, we have since scaled back to 280 cows for profitability, herd health, feed space and realising milking a greater number of cows doesn’t always lead to greater litres!”

The couple farm mostly Irish Friesian, Kiwi-cross Friesians, and some Jersey-crosses. They operate an autumn calving system, from August to October over a 10-week block.

“Unfortunately, half the farm floods during winter, so spring-calving was never an option. Instead, we benefit from the good weather for the calves and the ability to calve outside and maintain grazing until November.”

“We have selected these breeds for high milk solids, smaller frames and a hardy nature with good feet for walking tracks outside. In addition, they are good grazing animals with a good feed conversion efficiency.”

Cows are AI’d over ten weeks, with Friesian sires utilised for an initial three weeks to produce replacement heifers. Then, they serve cows to Hereford AI sires for ten days to use as a marker bull/colour change to differentiate between Friesians and Angus.

Finally, they AI the herd to Angus sires for the tail-end of the season to produce a “good saleable calf”.

“Our ideal cow would be between 550-600kg, a Friesian-type animal. We focus on good feet, fertility, and udder conformation. Longevity is important.”

The couple keeps 70 heifer calves as replacements each year, calving these at 24-months-old, and sells surplus heifer calves. Besides, they sell all Friesian and beef-bred calves at approximately 10-days-old to local farmers for beef production. 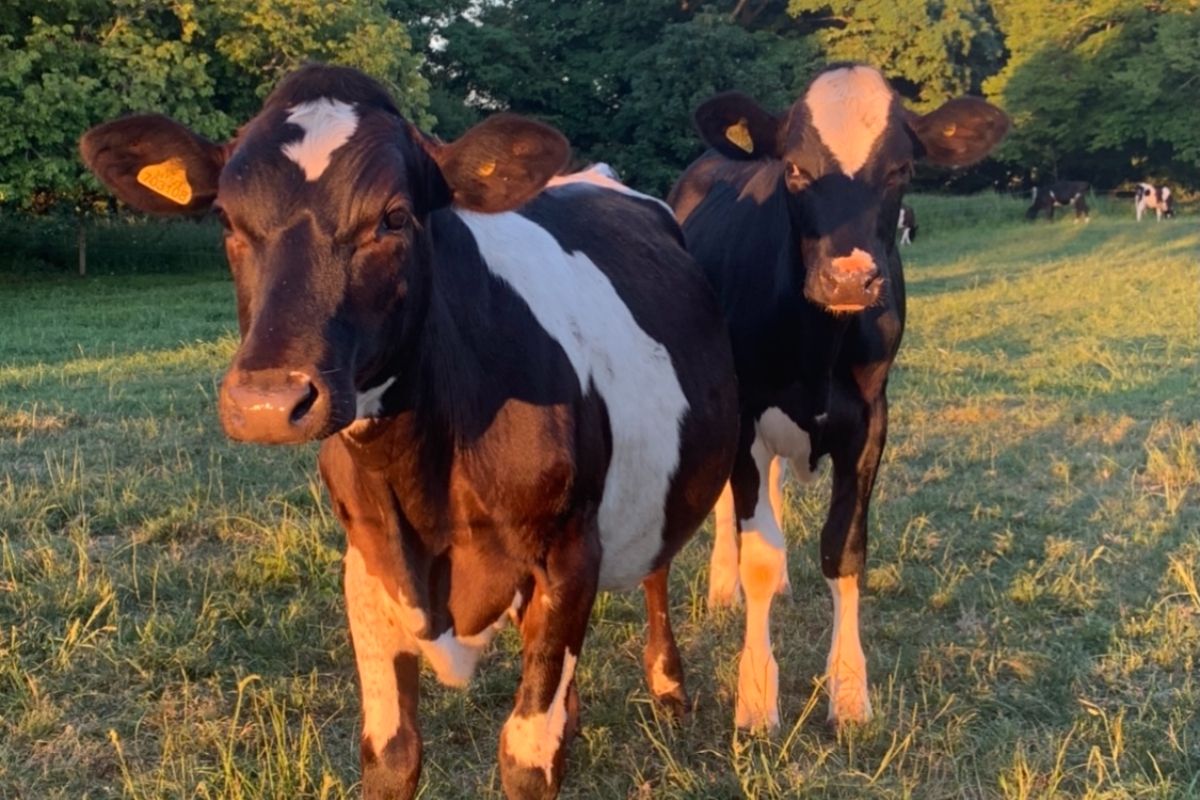 Herd performance and moving to a 1-operator milking system

Currently, the herd is averaging 20litres/1.7kg milk solids, with 4.74% butterfat and 3.8% protein off 1kg of concentrates, grazing day, and night.

Their 6-week calving rate is 76%, and their average calving interval stands at 370 days.

They have a Waikato 20:40 parlour, with in-parlour batch feeders, which they installed in 2015. They do not have ACRs, but intend to install them in the future to implement a better milking routine with one operator. Cows are milked twice a day, taking 2-and-a-half hours in the morning and 2 hours in the afternoon.

“We installed a teat spray line two years ago, which has improved the cases of mastitis and milking time instead of using a teat dip cup.”

“Also, we grooved the parlour’s concrete floor and collecting yard for cows two years ago. We found they did not want to come in. This has massively improved cow flow and confidence in the parlour, and we saw a drop in lameness.”

Grassland management is a vital aspect of their farm as they graze for the majority of the year. In addition, they self-feed and, therefore, require quality silage.

“We carry out weekly grass measurements of all fields that we record on Agrinet, to monitor growth and yield and make the most of efficient grazing and reduce waste.”

“Also, we fertilise behind the cows as they rotate through our grazing platform. We have divided the farm into 8-acre paddocks, with a total of 40 paddocks available.”

The couple uses GPS to “get the most” from artificial fertiliser without wastage. Besides, the use of the plate meter to measure grass growth is essential to their system.

“However, we are a low input unit, so we do not need great amounts of technology,” added the Dorset Grassland Society, LIC Moving On Up discussion group and the Kay Carslaw group members.

“Furthermore, we aim to re-seed 30-acres of the grazing platform every year to maintain grass quality. Besides, we are looking to trial some herbal and drought-resistant lays in the future. 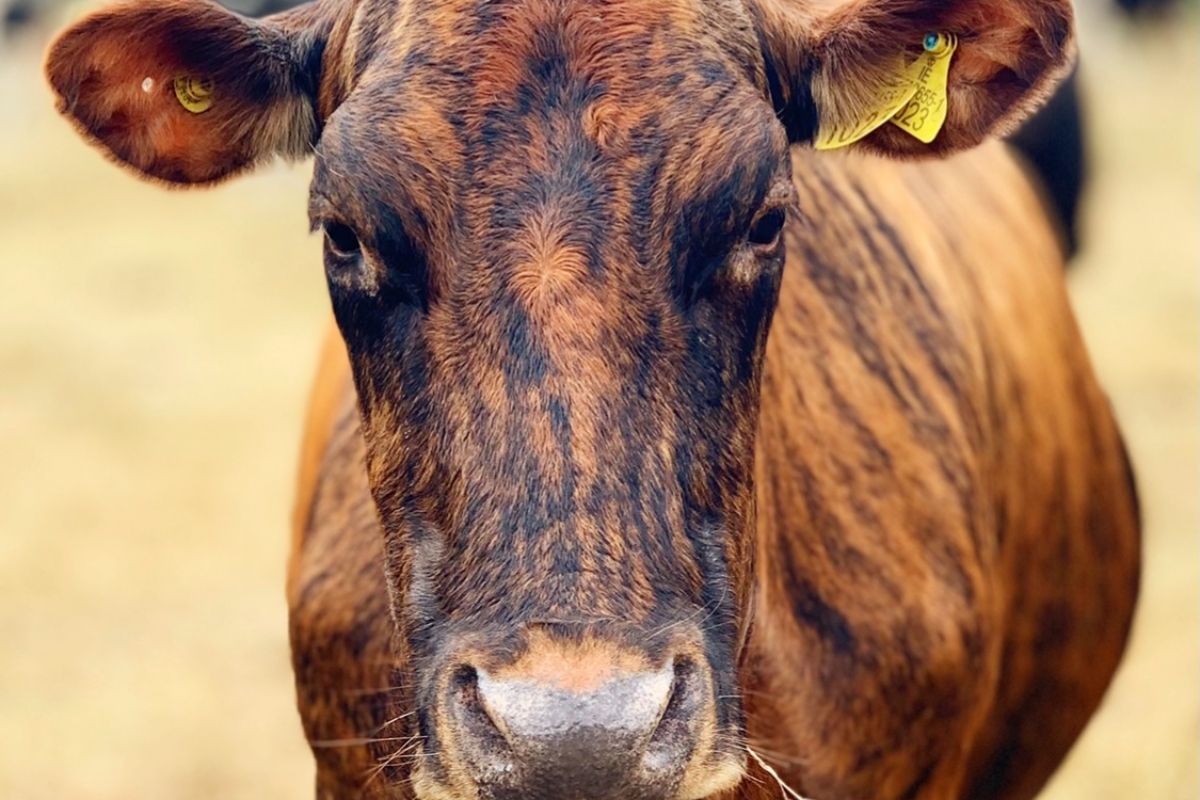 The couple house the herd during the winter period as the farm is exposed to flooding, as explained earlier.

They have 320 cubicles bedded on sawdust once daily and scrape sheds and cubicles twice daily to maintain hygiene and cleanliness and reduce digital dermatitis incidents.

When cows are fully housed during winter, they are fed solely on self-feed grass and maize silage, with a 60:40 split of grass: maize.

They are also fed a mix rape meal in with the maize when harvested, which works out as 1kg per cow per day to provide additional protein.

Grass and maize are clamped in the pits separately, with two pits for grass silage and two pits for maize silage.

“We use electric fence across the front of the feed face, which the cows are trained to eat both under and over. The trick to this is to use a low voltage and train your heifers before they enter the milking herd.”

“As the cows eat through the clamp, the electric fence is gradually pushed up, on average 6 inches a day, allowing them to access fresh food all day.” 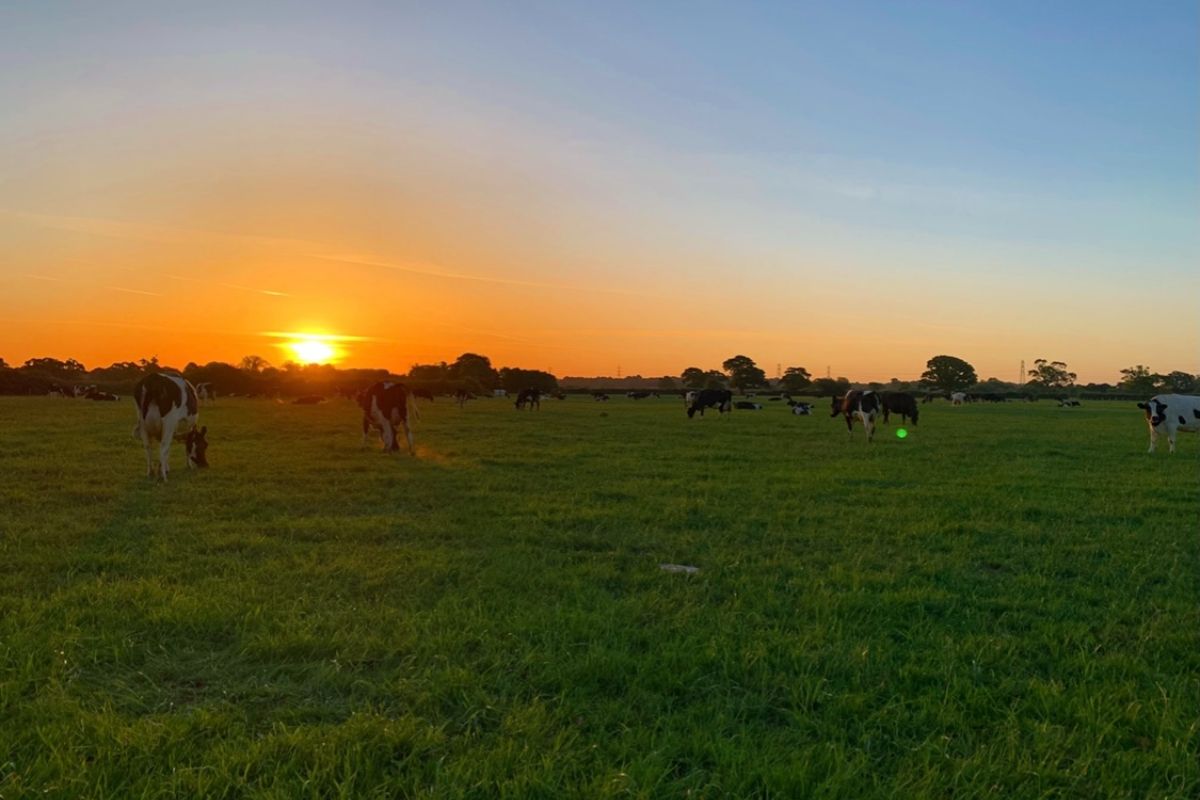 The couple cited weather as one of their biggest challenges. For example, half the farm floods in winter, while a summer drought usually follows.

“Even the best-laid plans can change overnight because of changing conditions. The second biggest challenge is the ever-changing milk price, causing farmers to constantly re-budget and re-plan with every big high and low.”

“The biggest impact for us was during the first lockdown and the milk price drop. The people we sell our milk to supply many catering industries and so were greatly affected, losing 80% of their business overnight!”

“This, in turn, affected our milk price, and we are only just seeing a positive change now. However, we managed to get through and are hoping for a better season this calving.”

“A challenge we have had to prove to people that you are capable of doing the job even though you are young, especially not coming from a farming family,” the first-generation farmers added. 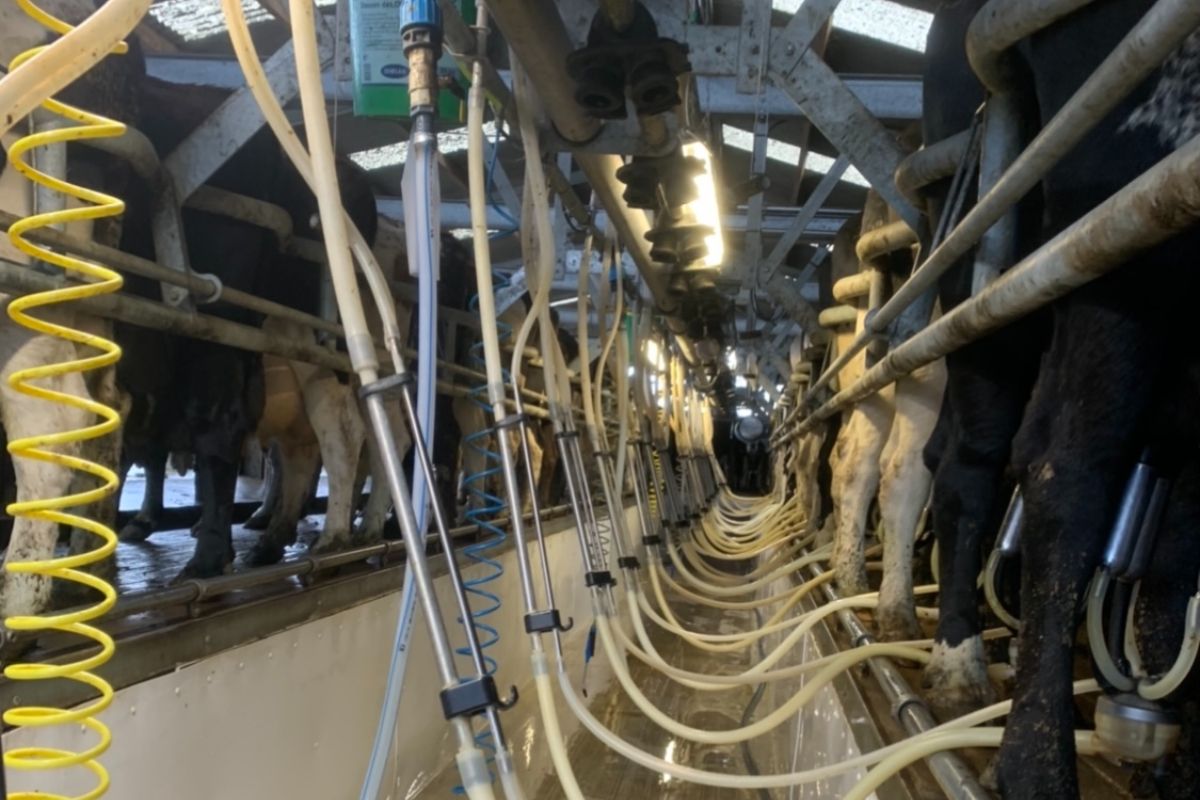 Perfecting their system and acquiring a second unit

The first generation farmers’ short-term plans are to perfect their system to “make it as profitable as it can be” – even during a low milk price year.

They aim to achieve this by breeding “the right cow” to maximise milk solids per kg live-weight. Long-term, they would like to find a second unit to replicate the system here and have two ventures.

“We found that increasing cow numbers generated less profit and more work. In addition, milk yields decreased due to extra competition for space and feed.”

“Our target production figures are 6,500 litres off 1 tonne of cake. We are striving for a tighter calving block to eight weeks and hope to use sexed semen.”

“We think dairy farming has a future. However, what it may exactly look like is hard to say. We need to push for grass-based regenerative farming, with an emphasis on low carbon output and local/sustainably produced dairy.

“We did not come from a farming background. Hard work and determination were needed to get us where we are today.”

“To note, we set ourselves goals, and even if we got knocked back, we kept striving for the end goal. Setting up our own business and having our contract farming agreement proves you can get there if you try and try and try again,” the first-generation farmers concluded.

We want to hear from first-generation farmers. To share your story, email – catherina@thatsfarming.com