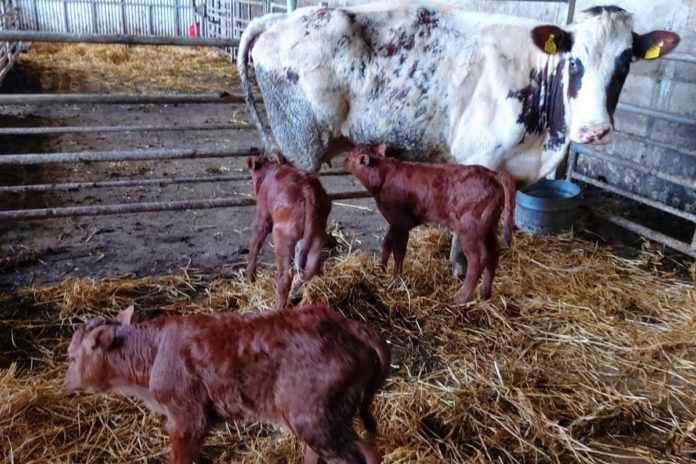 Exclusive: Twin sisters give birth to twin and triplet calves

Twin Belgian-Blue-cross heifers, purchased for foster suckler cows, have proven to be a blessing in disguise for a Co. Mayo farmer.

Speaking to That’s Farming, Ryan, said: “If any of my own suckler cows lose calves, Mattie is my nearest port of call. I am very satisfied with the quality, range and health status of his calves, which are cared for to the highest standard.”

Fast forward just over two years later, and the heifers themselves have become mothers on the 80-cow suckler farm, which is also home to up to 1,200 hoggets.

The females have continued the multiples tradition and defied the odds by giving birth to a set of twins (a bull and heifer calf) and a set of triplets (three bull calves) just over one week apart.

“I synchronised the heifers last January and they then ran with my Limousin bull. My veterinary practitioner advised me to AI both heifers and the one that had the triplets was AI’d to an Aubrac sire.”

Given their appearance, the suckler farmer is of the opinion that the triplets may indeed be Aubrac-crosses.

Speaking about the arrival of the triplets, Ryan said: “I was watching her as she began calving and when I handled her, I discovered the first calf was presented correctly, although he had knuckling in his first joint.”

“Once I got their feet straightened, I used the calving jack and popped the first calf through. I went search of a second one and all I could feel was a bundle of tails and legs.”

“The calf was coming backwards, so I got two legs, which felt correct and I delivered him too. Unsure if it was a case of a breech birth or the possibility of another calf, I checked again and sure enough, there was a third calf which was delivered backwards.”

“All three calves were born with knuckling in the first joints and have since been examined by my vet, showing an improvement day-on-day.”

The Mayo native explained that the calves are identical in terms of physical appearance, size, and weight.

“All five calves are doing well and so too are their dams. It’s been a historic occasion for us here on the farm, welcoming our first ever set of triplets – A joyous occasion in these Covid-19 times!” the Mayo native concluded.