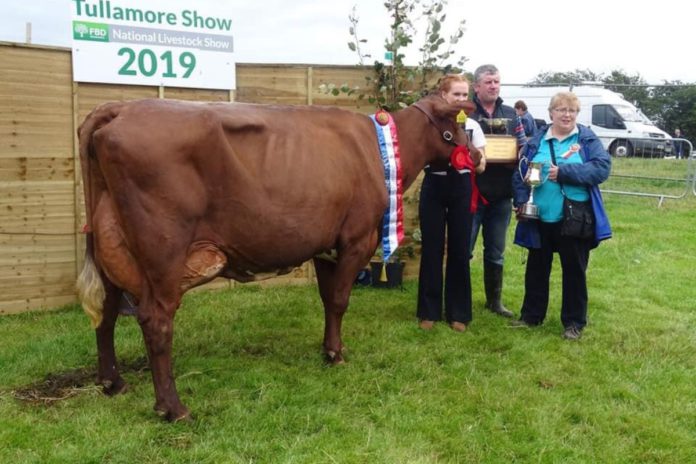 “Dairy Shorthorns are the best-kept secret” – that is the view of Monaghan dairy farmer James Lambe, who knows first-hand what the breed has to offer.

He took over Ballytrain Dairy Shorthorns, a 110-cow pedigree herd from his late father, Patrick, and uncle, Eugene.

He farms with his sons, Tomas, Padraig, Shane, daughter, Amy, and wife, Joanne.

In the early 1970s, Patrick and Eugene set up the pedigree Dairy Shorthorn prefix in Castleblayney, registering stock in the Coates herd book. The brothers also farmed a flock of sheep and a suckler herd.

In 2002, James made his mark by applying for the maximum milk quota available to benefit his grazing platform, removing the farm’s beef cattle and sheep.

“I went from 32 cows to 50 cows in the first year, and after that, I bought the maximum milk quota every year I could buy until coming into the abolition of milk quotas with 90 cows,” James Lambe told That’s Farming.

“We went from 90 cows to about 110 cows when the abolition of milk quotas happened.”

“The original cows that I would have taken over from my father performing well were kept on. Any of them that was not performing were sold off.”

“My father traditionally had a dual-purpose Dairy Shorthorn where I would look for the extreme-type to improve milk yields up on the cows.”

“Grassland management is an important practice, and truthfully, we would like to do more reseeding than we have.”

“I hope to do 10 to 15-acres of a grazing platform and another 10-acres of silage ground from now on.”

The Lambes have been using Dairy Shorthorn genetics for four generations. James needed a cow-type with “proper genetics” that “could be fit to pay a mortgage.”

He chose a higher production Dairy Shorthorn by selecting the right bull for cows performing well.

“When I took over the farm and sold the sucklers, bullocks, and sheep, to be honest, I could not source Dairy Shorthorns, so I bought Holstein Friesians in place.”

“I did not cull Holstein Friesians off the farm; they culled themselves.”

“So, when it came to scanning, we could be milking 40 Dairy Shorthorns, and there could be 15 Holstein Friesians annually at the end of the year.”

“Holstein Friesian cows left the farm, not because I wanted to get rid of them but because they did not prove in-calf, and their fertility was letting them down.”

James completed an AI course with Eurogene AI Services Limited and worked for the company for five years. This enabled the County Monaghan dairy farmer to AI his own cows.

“It took the average milk yield per cow from 4,500-litres to a current 7,000-litres of an average across the herd between AI and sourcing new genetics from the UK, Australia, and America.”

In 2006, James made his first journey to the UK, purchasing one bull and six heifers from the Churchroyd herd.

“Sourcing Dairy Shorthorns in Ireland was difficult, but sourcing them in the UK was not. I did not know it was so easy to bring them in before that.”

“So, I went back over to the UK three years later in 2010. I bought eight more maiden heifers and a stock bull, Rodway Max, from the Rodway Herd.”

“Rodway Max put a great stamp on our cows, increasing milk solids, frame, capacity, and yield. He was a fantastic all-around bull. The only regret is we did not get semen off the bull before we let him go.”

The herd is currently averaging between 500 to 520kgs of milk solids.

“One thing that sticks in my mind was a cow standing here one time with E.coli mastitis, and the vet came out. The cow had a temperature of 106.5 °, and the cow was standing chewing her cud. That is the type of cow I want.”

“The drought hit us hard this year, and we were feeding silage up until August 23rd, not a lot, which did depress protein a bit on the farm.”

James achieves these figures with one tonne-and-a-half of concentrates per cow. 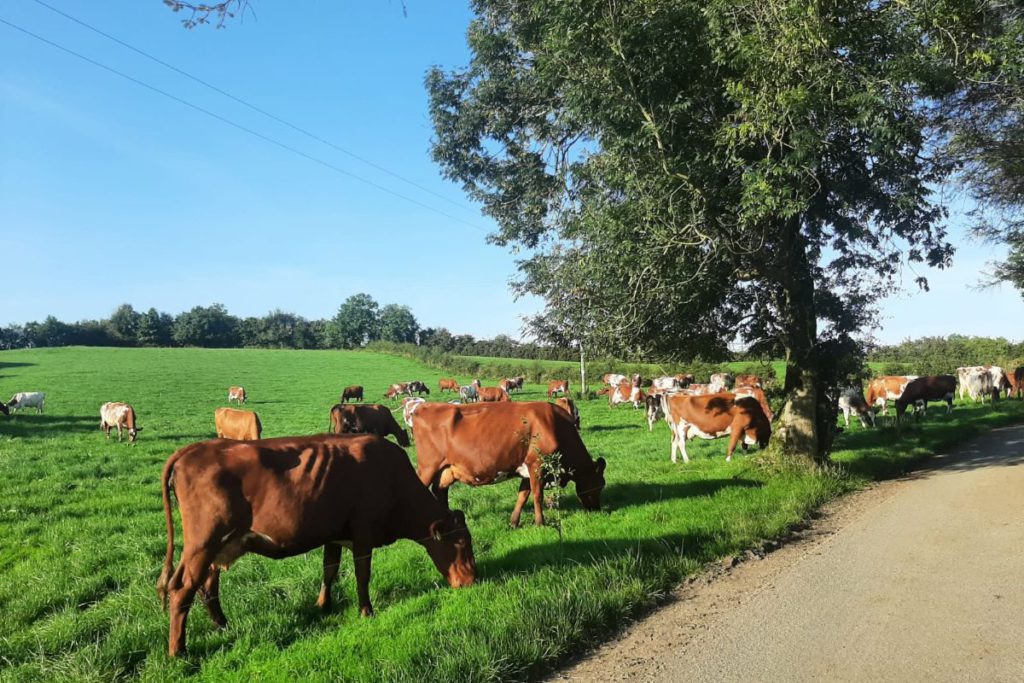 James chooses sires with the highest components based on the dam’s milk records when deciding on sires suitable for the herd.

He noted that the biggest challenge is achieving a proven bull, which is suitable to his farming system.

The breeding season takes place annually on the farm over six weeks, with a son of Kilsally Troy, his current stock bull (the highest PLI bull in the UK) brought in to clean up.

“There are twelve bulls for sale from 12 to 14-months of age every year. We sold bulls as far as Kerry and Antrim this year.”

“Last year, there was such a high demand for dairy stock that we were selling them at home; we could not keep them. There were commanding a good price off-farm with no hassle, clipping, or washing attached.”

“There is a huge demand for Dairy Shorthorn heifers at any age, on the ground, let it be, calves, maiden heifers, in-calf heifers, or calved heifers.”

“We could sell up to 30 calved, in-calf heifers or young cows every year. Besides, we take in between 20 to 25 replacement heifers into the herd each year.”

“We have customers coming here who would prefer a second-calver or a third-calver. Therefore, we could sell them and take a heifer in its place.”

Calving commences on the second week of January and concludes during the last week of April. The calving average of the herd is 378 days.

Cows are turned out to fresh pasture on March 17th, with weather conditions influencing night-time grazing’s.

“We start in January so we can have 20 to 30 cows calved to break down the workload to avoid them all coming in February and March.”

“Furthermore, we do not go down the road of the 6-week rate of calving and did not use any sexed-semen. I do believe there is not any sexed-semen in the country for Dairy Shorthorns, but we have not used any so far.”

“We never have any trouble in getting Dairy Shorthorn heifers, so there is no reason to use it at the moment. We do always get 55% of heifer calves currently from using conventual semen or stock bulls.”

Milking parlour and other infrastructures

The County Monaghan farmer completes twice-a-day all-year-round milking. It takes over 60 minutes to milk and an additional 15 minutes to wash up.

“In 2002, when I took the farm over from my father, we were currently milking in a tie-up byre milking parlour.”

“In 2003, myself and a digger driver, Brendan Fitzpatrick, got a mini digger in. We knocked all the internal walls of the byre, and we dug a pit out.”

“That milking parlour kept us going to 2016 when we extended the milking parlour back an extra 8-unit and put in the new automatic cluster removers and Cashman feeders.” 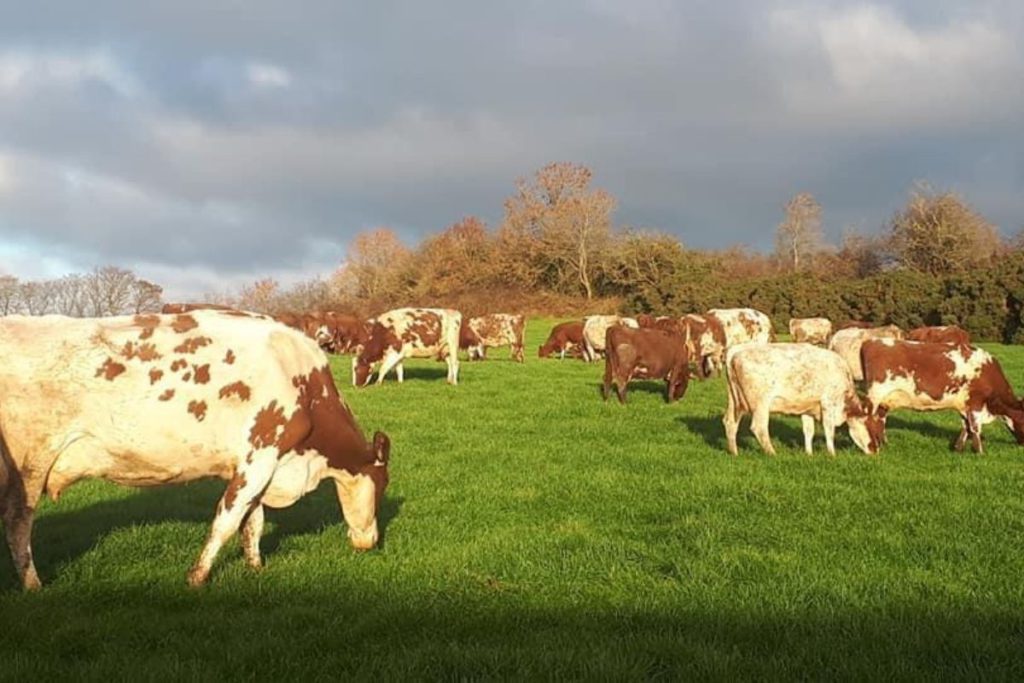 James and his family have showcased their stock for over twenty years at Tullamore Show and other agricultural shows in Ireland and the UK.

The family believe these events provide “a day out” for them and a “shop window”.

“In 2017, we won the champion Dairy Shorthorn title at Tullamore Show with a cow called Ballytrain Bloom 30th.”

“I felt this cow had a great chance, and at the 150th anniversary Balmoral Show the following spring, we entered her, with the help of fitter Brendan Grennan and handler Georgia Kerr.”

“She got champion Dairy Shorthorn at the Balmoral Show 2018 with the help of these three people.”

“She went into the inter-breed ring, following on from champion, up against Jersey, Holstein Friesian, Ayrshire, and Dairy Shorthorn cows for the inter-breed champion title.”

“Our Dairy Shorthorn cow won the inter-breed champion for the first time in 150 years of the Balmoral Show in 2018.”

“When you are at a football match, you have to leave it to run home and milk cows. All the rest of the parents can celebrate with their children the rest of the evening.”

“The hardest thing about dairy farming is getting the herd calved and getting them calved safely. There are a lot of sleepless nights involved in that.”

“But, there have been long hours and lots of hard work to take it from where it is now. There were highs and lows, and you get something out of what you put into it. If you work hard at anything, you will get there at the end.”

“When you see something you have achieved, works well, and do a bit of breeding with animals, you get satisfaction,” the Dairy Shorthorn breeder added.

“When you breed a cow, you decided what to mate her to, have done everything with her, and you see the result.”

Future of dairying in Ireland

James hopes to increase milk solids across the herd and noted several cows are producing 10,000kgs of milk.

He shared his thoughts on the future of Irish dairy farming.

“The future of dairy farming, I would say, is quite positive. Honestly, I would like to think there is a future and that some of my sons will take it over and keep the Ballytrain herd going.”

“There are positives, and it is a monthly milk cheque. I would say it is the closest thing to a job because you are paid monthly rather than part of the industry (beef or tillage farmers) who are not paid monthly.”

“I would say the future of dairy farming is good. But, on top of that, you get what you put into it. Hopefully, the markets can stick it, and will not be oversupplied.”

“Besides, Ireland is only a small percentage of what is produced worldwide at the end of the day.”

“Lastly, you can only control inside your own gate; milk prices or anything else is out of your control, truthfully,” the Dairy Shorthorn breeder concluded.

- Advertisement -
Previous article
VIDEO: 40,000gns for May-born Holstein Friesian heifer
Next article
Why you should body condition score your ewes