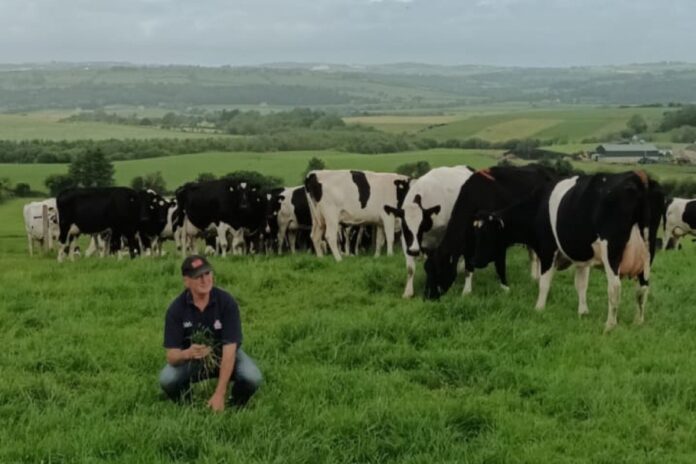 In this week’s dairy series, That’s Farming, speaks to Mícheál Dullea. He discusses farming with his family, moving from construction to farming, winning a milk quality award and the future of Irish dairy farming.

Mícheál Dullea, who grew up in Barryroe and lives in Enniskeane, County Cork, left his twenty-two-year-long job as a building contractor in 2018 when he inherited a farm from his aunt.

He established a herd of 40 dairy cows on the farm by investing in some heifer calves, maiden heifers, and springers from two Cork farmers.

Following this, he expanded the herd to 70 females in 2019, 81 in 2021 and 93 British Friesian-cross-Holstein Friesian-cross cows this year.

“Growing up, when I was a small boy, we grew beet and barley, milked cows and had a few pigs, and that was what was at home,” Mícheál told That’s Farming.

Mícheál completed his Green Cert in 1983 at Clonakilty Agricultural College after his secondary school studies.

In subsequent years after marrying his wife, Martina, he rented ground to maintain his farming interest and kept some cattle whilst working full-time off-farm.

Mícheál farms with his wife and son, Ciarán

(21), who has been attending Clonakilty Agricultural College over the last two years and plans to enter an official farm partnership with his father in the coming year.

“I choose the breed because you have good size. But, to be honest, I would not like a full Holstein Friesian cow because they are too bony, and I find you have a bit of flesh with the British Friesian.”

The herd’s EBI is €96, which Mícheál outlined is “poor due to older cows not being registered” and outlined that “this index would increase as additional heifers enter the herd”.

According to the family, they fed 700kg of concentrates per cow to achieve the above performance figures.

They use 80% conventional AI on heifers, generally achieving this success rate within the first two rounds of service, before an Angus stock bull mops up.

The family select sires based on protein and butterfat figures and currently utilises a team of eight bulls.

The farm plans to utilise a breeding programme of all conventional AI in 2023.

Rising concentrates costs brought the family back to the drawing board this year, and they returned to their old calving system from January 20th to April 1st.

This change enabled them to get livestock out to pastures as early as possible and reduce feed usage.

Before this, they calved from January 20th to the first week of April and then also in November-December last year with the late calving period to enable them to get a stronger calf.

“Heifers are calved at two-years-old. In my view, they would be longer in the herd and have more lactions and better fertility.”

“I feel if they calf at two years compared to three-years-old they will have an extra lactation which is worth a good bit.”

“In my opinion, a three-year-old heifer is very expensive to rear compared to a two-year-old as it is an extra year feeding them.”

According to the family, the herd’s calving interval is around 370 days.

They aim to keep 20 replacement heifers annually, with land availability for 20 heifers, 20 maiden heifers and 20 calves across their current parcels.

The Cork dairy farmers have a strict culling policy for age and high SCC. In addition, they sell beef-sired calves and Friesian bull calves in Bandon Mart at circa five-weeks-old.

“To note, calf prices were so poor this year we kept the last ten calves because I would not like to sell them for €35.”

They have reseeded 80% of the farm over the last four years and have incorporated clover. The family measures grass from March and inputs data into the PastureBase Ireland app.

According to the family, the farm has a stocking rate of 1.91LU/HA.

“It would have been a help if they told us we were supposed to have a trailing shoe before we went into it. For example, they said I should have had it when I went for a grant to get a trailing shoe.”

The family milk in a 7-unit Gascoigne milking parlour installed in the 1970s and milk twice-a-day taking, taking around two-and-a-half hours during the summer.

They plan to upgrade their milking parlour with a 16-unit.

On the farm, they incorporate technology using a Volac Urban Calf Feeder, which has two stations and can feed up to 60 calves.

Challenges facing the family include rising diesel and electricity prices and veterinary costs.

“Fuel prices went up at the petrol pumps, and the barrel of oil is after coming down a good bit, and everything else is slow to come down accordingly.”

“If milk prices fall, will everything else, like feed and fertiliser prices, come back down again? That would be my worry.”

In addition, they noted that they are only in dairying for a “short” time with extra work to undertake in the coming years.

Mícheál completed most of the construction work himself using his skills from the trade.

They aim to use slurry and soil water in the most efficient way to cut fertiliser usage, reach 560kgs of milk solids per cow and improve fat and protein percentages and the herd’s EBI.

“I think there is a good future for the dairy farmer here in Ireland. There are lots of people getting out of milk, and the world’s population is rising, so in my opinion, milk prices will hold.”

“The reason my son is partnering with me is that if he can get ground nearby, he could start on his own and get his own herd number for a few years; I am not ready to give up dairy farming yet.”

“I would like to note that getting the Carbery Milk Quality and Sustainability Award for Bandon Co-op recently was a huge boost to us for what we have done in a short time.”

“Honestly, I feel to be nominated for us was a big thing, but to win the Bandon Co-op section was like winning the All-Ireland.”

“I feel it was a great achievement and also for my son as he can see what is being done on the farm and will have to keep it up then,” the dairy farmer concluded.

- Advertisement -
Previous article
Opinion: EU response is that we need to move away from chemical fertilisers
Next article
‘Dry cow housing is the biggest challenge’ – vet discusses SDCT