That's FarmingThat\'s Farming Irelands Largest Farming News, Properties and Classifieds Network
HomeDairy‘We are not planning on going to 1,000 cows or anything’ 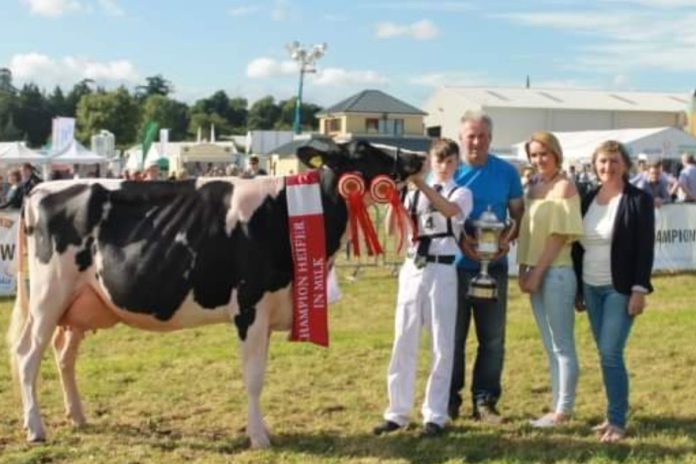 In this week’s dairy segment, That’s Farming, speaks to Garry Hurley of Clonpaddin Holsteins about his life-long experience with the breed, and a stand-out cow that bred 62 calves.

The farm spans 235-acres, with 150-acres owned, while they lease an additional 85-acres, 25-acres of which they utilise for maize.

“We are milking 150, and we are not planning on going to 1,000 cows or anything. Milking now takes half the time; if you have help in the summertime, I can milk about 130 in an hour.” Garry Hurley of Clonpaddin Holsteins told That’s Farming.

The family selected the Holstein breed due to their renowned milking abilities. Gary outlines that they have been breeding them since Holsteins set foot on Irish soil, back in the early 1980s.

“When quotas were in, we were slightly land tied. So, the more milk we could get out of a cow, the fewer cows we would have to have for the amount of land.”

“The ideal Holstein cow-type has changed over the years. There was a time when farmers wanted huge Holstein cows.”

“Not anymore; I do not want them either. There was a time when I did, but there is a lot of work with them; they are hard to handle.”

“We go now for a medium-sized Holstein cow with good legs and feet, well-structured udders, good fertility, fat and protein; milk is number one. The cow would want to be peaking at 9-10 gallons a day.”

Their breeding programme revolves around using AI and sexed semen to increase the number of heifer calves born on their Wicklow-based farm.

“We used AI ever since it was allowed into the country. We started with it here in 1952 when AI was allowed by the Department of Agriculture.”

Calving starts around September 1st and continues until May 1st, and Gary aims to turn the herd out to pasture around April 15th.

“Back in the 1990s, we purchased a few cows from Canada and flew them home. We purchased cows from different cow families.”

“We have been working mostly with them, but that has all changed now with embryos; you do not have to buy them any more; you can buy embryos from anywhere in the world.”

“We buy embryos for breeding, trying to get cow families in that people would not have. At the moment, there is a lot of emphasis on red and whites.”

“I usually put embryos into the bottom section of the heifers. Also, I do a bit of flushing. I always had it in my mind if I bought a cow to sell the calf as quick as I could to try to get half my money back.” 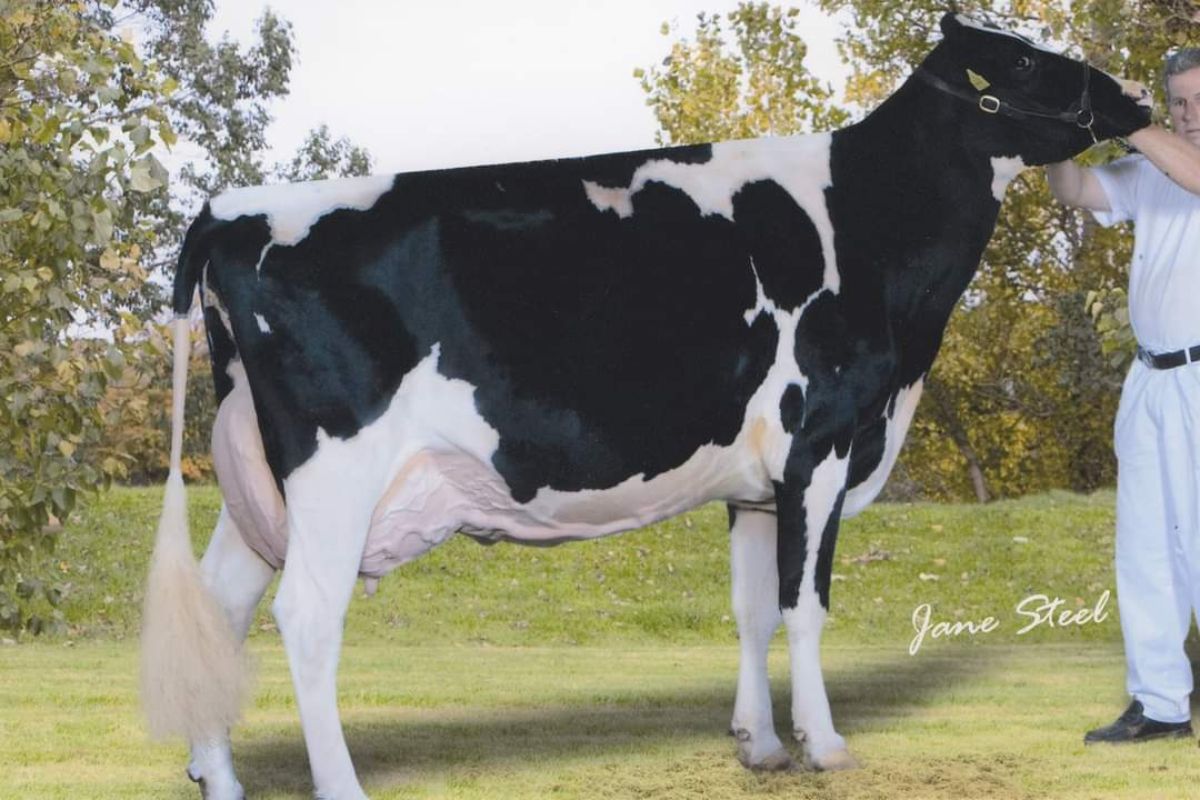 Besides, their land experiences wet conditions, which results in the use of more concentrates/silage.

“We could get out on April 1st and go back in during summertime if the land is wet, so we could be feeding up to two tonnes of concentrates.”

“As we bring them back in when the land would get wet, I would always have a good supply of silage. I never run out of silage if I can help it because you never know when they might have to come back in.”

“I try and reseed as much as I can as often as I can. It does not always work out that way with wet land.”

“Usually, here, as we would not have many stones, we plough to reseed, whereas a lot of farms would have stones, and they would not want to plough, whereas we have no problem with stones.” 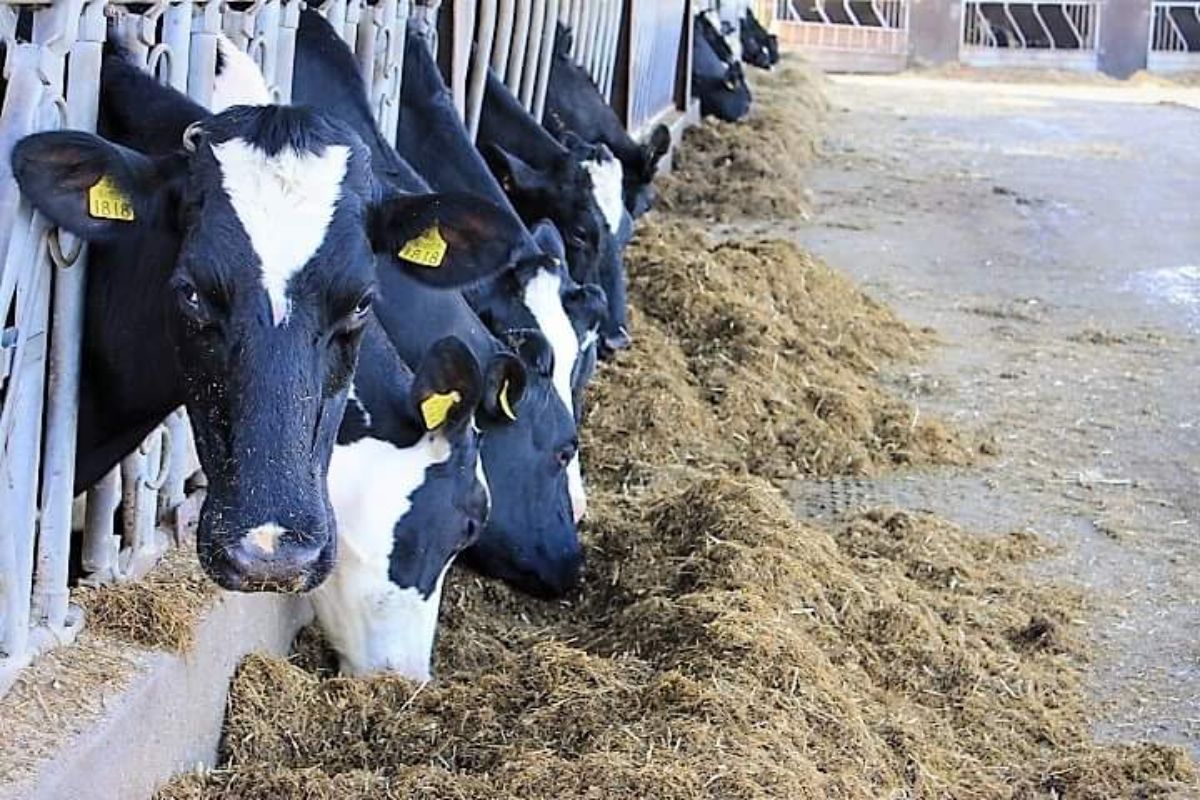 Clonpaddin Fame is a stand-out cow that delivered the goods for the Hurleys; Garry believes she was “probably the most popular cow” within the herd, as he highlighted her profound impact in the Holstein Friesian circles globally.

“She is probably one of the best breeding cow families in the country. I bought her as a calf because I wanted to breed from that cow family; I bred 62 calves from her.”

“Some of her calves went to Scotland, England and Northern Ireland; there is a good market for them in Ireland.”

Garry’s specialised approach to breeding Holstein Friesian cattle has been recognised at a local, national, and international level.

Clonpaddin Holsteins, a member of Slaney Holstein Friesian Breeders’ Club, has a prominent presence at events across the country, but has also officiated as a judge overseas.

“We are big into showing cattle and attend all the big shows in the country. I always think to myself, will they [cows] stay in the first three places? If not, I do not bring them.”

“Each county has its own club; that is where I started showing and breeding cows as part of the club. Then I progressed to doing some local judging, then all over Ireland. I was asked would I go on the European judging panel in Hungary.”

“I was in Hungary and Holland 10 years ago. You have to go twice. I was second, twice for judging.”

Garry is satisfied with the herd’s current size but feels the abolishment of milk quotas should have been phased in slowly.

“I always thought they should have never taken away quotas, to the extent they did. Now everyone does deserve a chance but what they should have said is okay; we will let everyone get 20% extra and see how it is going for five-years.”

“It should have been phased in better. They just took it away, and everyone is made to get into dairy cows. Dairy farmers rushed in doubled and tripled their cow numbers.”

“At the moment, the dairy sector looks good, with top prices everywhere in the country. It is looking favourable more so than any other enterprise,” Garry of Clonpaddin Holsteins concluded.