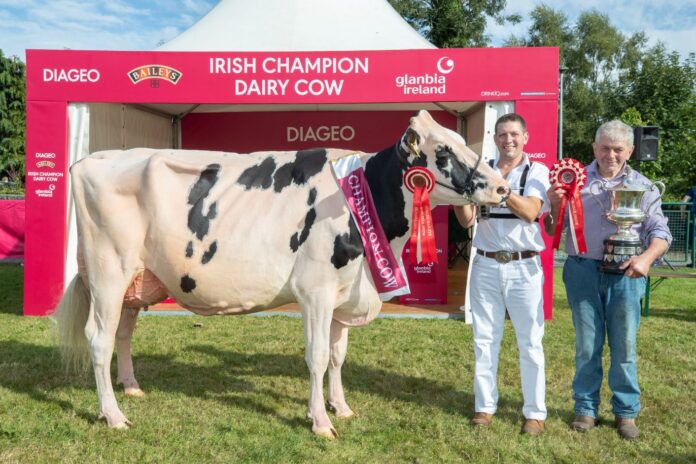 ‘She is a true model of a dairy cow, balanced, with strength’

A 3-year old-Holstein Friesian cow property of father & son team, Sam & John McCormick from just outside Bangor in Co. Down, has been crowned the 2022 Diageo Baileys® Irish Champion Dairy Cow.

Hilltara Undenied Apple was declared champion in this prestigious dairy cow competition at the Virginia Show on August 24th, 2022.

Holstein Friesian breeders travelled from across the country to compete for the €10,000 prize fund, with  21 cows standing in the finale.

The McCormick’s cow also won the ‘Junior Cow’ category. This is not the first time Sam McCormick has taken the trophy back to Co. Down, having clinched the top title in 2017.

He now becomes the first-ever Northern Irish entrant to win the top title more than once in the competition’s 39-year history, organisers say.

The judge, David Booth, who is from Yorkshire, said, “Hilltara Undenied Apple absolutely blew me away. She is a true model of a dairy cow, balanced, with strength.”

Sam and John received their trophy and a cheque for €2,500 from the guest of honour, the EU Commissioner Mairead McGuiness; John Murphy, the chairman of Glanbia Ireland and Robert Murphy, head of Baileys operations.

The event is regarded as “the most prestigious competition” of its kind on the island of Ireland.

It rewards “strength and good body conformation as well as proven excellence in quality milk production”.

- Advertisement -
Previous articleDry cows to €2,660 and bullocks to €2,650 in ‘strong’ trade at Dowra
Next articleCarnew: Feedlot buyers ‘back with a bang’ for all cattle 500kgs+