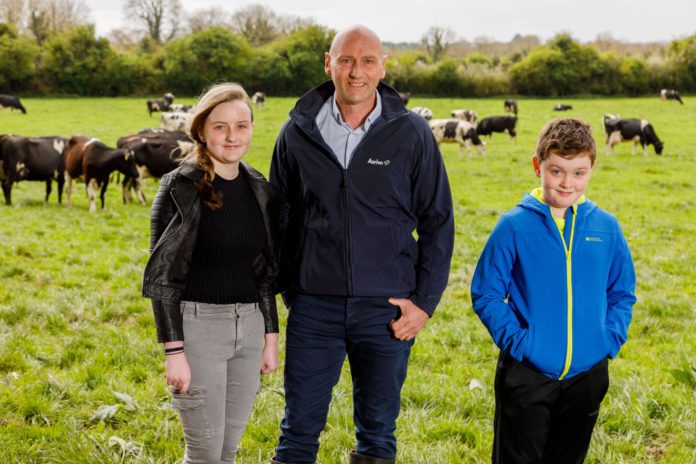 Aurivo has announced Peter Hamm from Co. Westmeath as its Aurivo Milk Supplier of the Year 2021 at the Aurivo Milk Quality Awards.

Eight Aurivo milk suppliers have been acknowledged for their contribution to dairy farming excellence at the 14th annual Aurivo Milk Quality Awards.

The top accolade, Aurivo Milk Supplier of the Year, was awarded to Peter Hamm for his relentless focus on sustainable farming practices.

Peter was recognised for his commitment to developing his conservation area for biodiversity growth on his farm and his attention to detail concerning animal welfare.

Hamm runs a family farm at his home in Moate, Co. Westmeath, where the farm has been in the family name for over one hundred and twenty years.

Previously a suckler and equine farm, he converted to dairy in 2014. Today, he milks 133 high-EBI black and white cows on 69 hectares, with the help of his wife, Caroline, daughter, Kate, and son, Jack.

Furthemore, he has a keen interest in providing training for students. To note, he works with the local Moate Community College and numerous agricultural colleges, training the next generation of farmers.

Peter will now represent Aurivo at the NDC and Kerrygold Quality Milk Awards which sets out to find and celebrate the top milk quality farmers in Ireland – the most prestigious awards ceremony for Irish dairy farmers.

Award winners in the eight categories include:

Commenting on the awards, Donal Tierney, Chief Executive of Aurivo, said: “The Aurivo Milk Quality Awards is an annual award programme which recognises standards of excellence in dairy farming.”

“I want to congratulate each of our category winners, who are exceptional ambassadors for Aurivo and the dairy farming sector. They continuously illustrate the highest quality of milk supply.”

“Aurivo is very proud of its quality milk pool and committed supplier base of almost 1,000 suppliers in both the Republic and Northern Ireland. Our farming families’ incredible commitment and dedication allow us to produce the best quality milk.

“I want to take this opportunity to congratulate each of you on this prestigious honour which acknowledges your high standards, commitment, and dedication. I would also like to personally congratulate Peter on his success as Aurivo Milk Supplier of the Year, which is well deserved,” Tierney concluded.