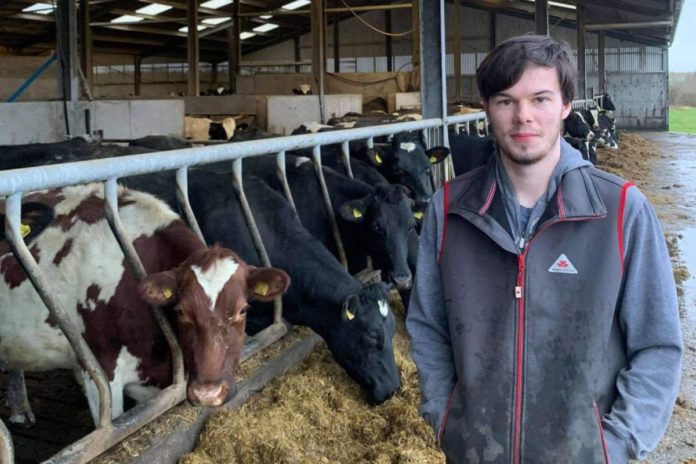 As part of this week’s dairy segment, Catherine Creighton speaks to Aidan Donnelly, a student at Mountbellew Agricultural College/GMIT, who is involved in the running of the family’s 150-cow herd.

The 20-year-old’s great love for dairy was sparked at a young age. He is the fifth-generation of the Donnelly family to farm their land. His grandfather, John, recalls his own father and grandfather farming the land, so he has witnessed all the five generations.

They have predominantly Friesian cows but also farm some Jerseys and Meuse-Rhine-Issels.

“We were always milking cows, but we expanded when the quotas were abolished. We have a 14-unit herringbone swing-over parlour with auto cluster removers,” Aidan Donnelly told That’s Farming.

“I have a lot of responsibilities but every year my list of responsibilities keeps getting longer! I am in charge of milking, rearing calves in spring, driving machinery: I would handle all silage making ie mowing and stacking bales. I do just about everything really.”

“Dairy farms have to be run as efficiently as possible. There is no room for a high input/high-cost system, that is simply unsustainable. We strive to make the farm as efficient and as modern as possible by using all technologies available such as milk recording, grass measuring and soil testing.” the young farmer added.

They operate a spring-calving, but the family’s milking parlour was originally set up for winter milking. “It’s not like the traditional parlour where you just have the collecting yard.”

They keep all Friesian bulls and heifer calves. Furthermore, they AI the main herd. Also, they own three Friesian bulls each year for mopping up as maintaining a closed herd is an essential policy on this Galway-based enterprise.

The Galway native practices grass measuring and inputs all information into Pasture Base.

“Make use of the technologies there are. If you are a dairy farmer, you have to get out grass measuring and milk recording. Besides, it is important for beef farmers to measure grass. Milk recording is well worth the time. It is good to know what they are producing.”

Aidan began his degree in agricultural and environmental management at Mountbellew Agricultural College in September 2019 and is now in his second year.

“Farming and student life now goes fairly hand in hand. Back in normal times, I would be home from college in enough time to feed and look after calves in the evening. Most work would be done on Saturday which I’m always there for.”

The college delivers the degree programme in conjunction with GMIT so for first-year, Aidan spent one day per week attending labs in IT and two days a week as part of his second-year studies. This coming September, the course will be delivered full-time on the GMIT campus.

“It was my first choice; I was always unsure about ag college whether to do the Green Cert or go the full ag science route. I chose Mountbellew because of the combination of on-farm and off-farm work.”

“It was also convenient for me, being only 45 minutes away from where I live. There’s a working farm, and I thought the farming practices there would be more relevant to me rather than travelling to other parts of the country where land-types vary.”

“Advice to young farmers would be to get an education first and foremost. The days of where you could take over a farm with no qualifications are gone. Farming is a business, and it must be treated as such; a good understanding of business and science would be essential.”

“Younger farmers also need to be involved in farmer groups such as the IFA or Macra where they can meet like-minded people. Macra is an invaluable in the social events it offers as well as ag policy discussion/formation.”

Looking ahead, Aidan believes there will be a bigger focus placed on the dairy sector in the future and an increase in the number of farmers opting to contract rear dairy animals rather than enter the beef sector.

Aidan is in no rush to take over the family farm; he intends to finish his course and is looking forward to the many career options he feels it will bring.

“You do have to expand with new entrants coming in when you do come from a farm. You have to be prepared for that. I think travel would be essential. Young farmers need to see other dairy production systems in different countries and compare and contrast.”

“Seeing the disadvantages in another countries system is just as seeing the advantages. It is about seeing what works and what doesn’t work, if you go abroad, you’d see plenty of things that Ireland has that other countries don’t have and vice versa.”

“I have no set plan of what career I want after I qualify yet. The good thing about my course is that there are so many career options; I am not limited at all.” Aidan Donnelly concluded.

- Advertisement -
Previous article
New world record price of £6,100 for unbroken pup
Next article
‘I started going to the mart with dad when I was 15, and I buy my own cattle’