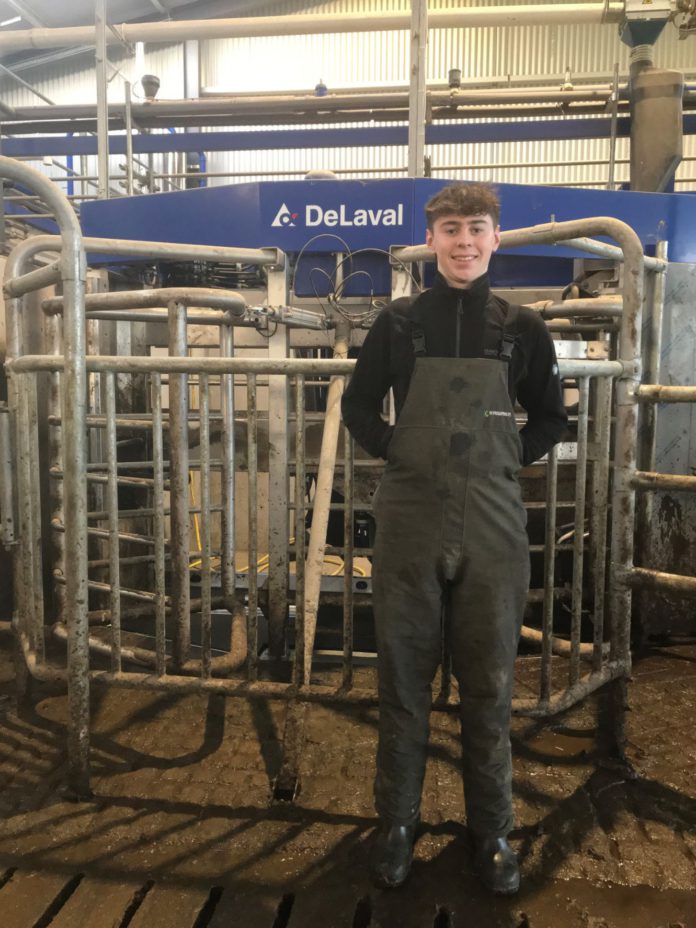 In 2018, the Nolan family jumped on the dairying bandwagon, calving forty heifers in late January 2019.

The Kilcock, Co. Kildare natives have operated a dairy calf-to-beef system since 1995. They purchased 40-50 British Friesian, Angus and Hereford bull calves in springtime and finished these on a grass-based platform after twenty-four months.

With their entrance to the dairy sector came the formation of a partnership between Tom, his brother, Padraig, and mother, Margaret. The family also installed a DeLaval VS300, with the help of E.C Pratt Delaval in Abbeyleix Co. Laois. 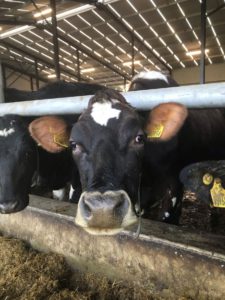 17-year-old Iarla Nolan is the third-generation of the family to carry on the long-standing tradition. The Castleknock College Leaving Cert student, a winner of the Certified Irish Angus Beef Schools competition, is following in his family member’s footsteps.

Both his grandmother and grandfather hail from farming backgrounds. His grandfather originally came from a small farm in Co. Carlow.

He went on to study agricultural science in UCD and pursued a career as an agriculture advisor with Teagasc. His grandmother was also born on a dairy farm outside the Muckross estate in Killarney, Co. Kerry.

“They purchased Belgard House in 1969 and initially held sucklers, sheep for a small period and also some tillage before concentrating solely on cattle in the late 1980s,” Iarla told That’s Farming. 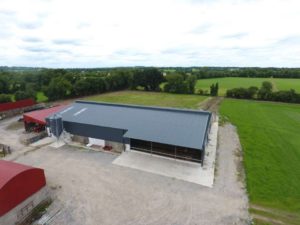 Now, the next generations of the family have turned their attention to dairying. From humble beginnings, they are currently robotically milking 70 cows, mainly British Friesian and Jersey-cross-New Zealand Friesian, on their 85-acre holding.

After acquiring their foundation females, they purchased 12 Jersey-cross New Zealand Friesians to boost butterfat and protein and also to enhance grassland management.

“We milked 50 cows for our first season with little trouble during the calving period or summer grazing.”

This year, they have purchased 22 in-calf pedigree British Friesian heifers due to calve in February 2021. The reason for expansion is to reach maximum capacity on the robot and to boost milk volume and quality coming into 2021.

“As new entrants, we felt a spring-calving system was the most economical and advantageous for us. It allowed us to create a strong grazing platform in which we could produce high-quality grass to fuel a herd with as little reliance on concentrates to boost milk production as possible.”

“Perhaps, in the future with the economics of allowing a robot to lay idle for five months of the year, a split herd could be an interesting factor to bring into play. However, we are observing and tracking our progress as the system and structures of dairying evolve.” 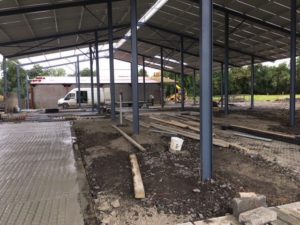 The family operate a robust and precise breeding programme to avoid cows calving into mid-March.

All calves, which are beef-bred, are sold at approximately six weeks of age to farms in the locality. So far, all stock are in-calf to an easy-calving Angus. For heat detection, they use a vasectomized bull which has proven very successful in the last two years.

“However, we felt that this year our results were not as good as the young bull could not serve 50 cows. Therefore, we will probably have to run two vasectomized bulls in the herd of 70.”

The success of the vasectomized bull in our first year was largely because heifers were synchronized in the first year. “In relation to acquiring stock bulls, it is something which we have not looked into yet.”

“The breeding advantages with A.I. are far superior, along with the fact that our robotic drafting system, is something that may present issues as it is not equipped to deal with a bull who following a cow that is in heat.”

“My ideal cow would probably be along the lines of high-EBI pedigree British Friesians. They are very much an all-rounder; however, I have to admit I do have a fondness for the Jersey-crosses.” 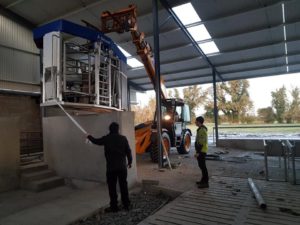 Grassland management plays a pivotal role in the thriving enterprise and is something they strive to improve year-on-year.

A robotic system allows them to operate an ABC grazing system of three 8-hour periods per day.

All of their grazing is intensive strip-grazing, with a view to providing cows with leafy perennial ryegrass to boost milk production.

“We measure our grass once-a-week using the Grasshopper plate measuring device. We have re-seeded in the form of grass stitching in the past few years, which has proved very successful. Maintaining grass quality is certainly key to producing high-quality milk.”

“Like all transitions, the early days of dairy farming inevitably brought some challenges. Of course, it took some time to familiarize ourselves with the robotic system. We still encounter problems from time to time, but overall, the robot has been a success.”

“I maintain that the only reason a robotic system will fail is if you are not willing to invest time in training your cows. Overall, it took us two months to train every cow to the robotic system, and some took to it faster than others.”

“So far, we are very pleased with the machine, and it has allowed us the freedom that most dairy farmers with traditional parlours don’t enjoy. I believe it is the future of the dairy industry, and currently, we couldn’t look in any other direction.” 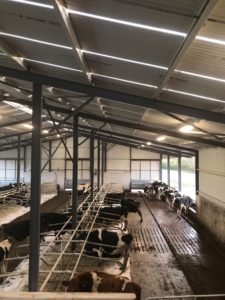 Iarla highlighted that robotic milking has proven to be labour and time-saving activity on the farm as cows are milked 2.3 times daily.

“It is also beneficial for achieving good BCS in the pre-calving period as you can dictate how much meal an animal gets without them getting bullied. Also, the option is there to restrict their milking.”

“It offers information on SCC and can detect mastitis in one quarter 24 hours before it shows in the milk with the option to dump that milk from the system. Most importantly, it gives you the freedom to not be tied to a milking parlour every day and allows time for more than farming in life.”

They have 78 cubicles with automatic scrapers and have adapted the new cubicle shed to the existing slatted shed. They have retained existing tanks with everything being under one roof including cattle crush and calving area.

To accommodate calves, they have 20 individual cubicles for newborns. After 2-3 weeks, the Nolans allocate calves into batches of four on straw.

Looking ahead, the family are satisfied with the herd’s progress with an aim to milk 78 cows.

Instead of expanding, they intend to focus more on genetics and produce their own replacement heifers. “We would like to improve our milk yield to over 55,000-litres per cow and achieve a protein figure in the 3.9 region.”

“For me, the best part of dairy farming is the satisfaction which is entailed with the job. There is a great sense of pride in building a herd and producing such a wonderful product for the public.”

“Calving is something that really ignites my passion. There is something that cannot be explained to express the sheer thrill you get after delivering a healthy calf. While it’s gruelling at times, it’s something I look forward to every year.”