That's FarmingThat\'s Farming Irelands Largest Farming News, Properties and Classifieds Network
HomeBeef‘You have to be able to see the faults in your own...

In this week’s Suckler Focus, That’s Farming, speaks to Adam Armour of Woodvale Angus. He discusses the family’s long-standing association with the breed, securing bulls in AI stations, and success on the show circuit.

“Keeping numbers down, but quality good” has been the Armour family’s primary aim since they began suckler farming over three decades ago.

25-year-old Adam Armour runs a multi-breed suckler and sheep enterprise, with his father, Alwyn, and mother, Carol, in Dromara, County Down.

The foundation Angus female was Priestland Lady Jane, which they purchased from Sam McCollum of the Priestland herd in Bushmills.

They acquired other cow families over the years, including the Tofts Poly Prides, and three Canadian embryo families: the Miss Annies and the Tidy Bees from the Coldstream herd, and the Kinannies from the Argwen herd.

Adam was keen to introduce other native breeds to the farm, which is now home to twenty pedigree breeding females.

This led him to establish a pedigree Hereford herd in 2013, a Shorthorn herd the following year and a flock of Dorset sheep in 2016.

They added other females from the Dorepoll herd, Dundrod, and the Barnburn herd, Saintfield.

Besides, the family invested in 20 ewe lambs from Ben Lamb, Richhill flock, Richhill, Armagh, to establish their Dorset flock. 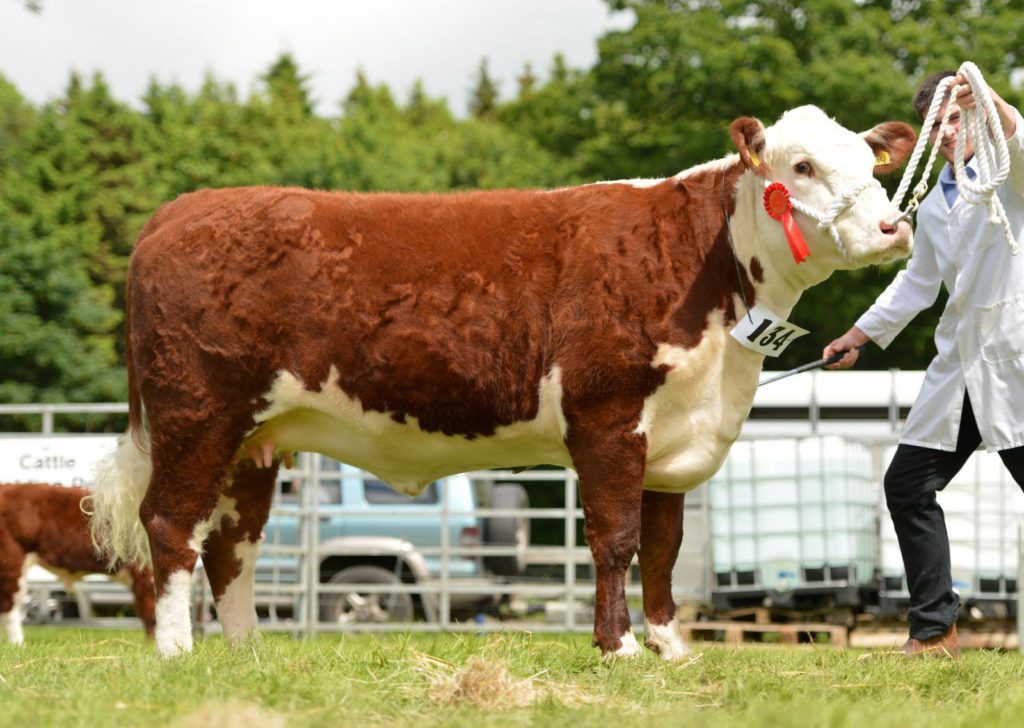 “We selected the native breeds for their maternal characteristics, easy fleshing and their ability to produce high-demand, quality beef.”

“We generally use a stock bull, but are keen to bring different genetics into the herd through AI, using highly proven bulls such as Rawburn Transformer.”

Aberdeen Angus breeding females are the most common sight on the 45-acre enterprise despite their venture into other breeds in recent years.

“The first stock bull was Brigade 5TH of Ladeside, bred by Woodvale Roscoe Y054, who we later retained as a stock bull after his father.”

“Woodvale Roscoe bred us many champions, including the 2003 October Perth Champion, Woodvale Endeavour, the first and only home-bred Aberdeen Angus Perth male champion from a Northern Ireland herd. “

“A later bull purchased was Wedderlie Net Profit with the Forsythe family. Moneymore, who bred us the intermediate reserve champion at the Stirling Bull Sales in 2015, as well as a son, Woodvale Network, who is still used in AI Services.”

“AI has also allowed us to continue using bulls such as Wedderlie Net Profit throughout the years.”

“One of the most influential bulls in recent years has been Oakmoor Mr Paul, who bred us the Balmoral Aberdeen Angus Champion and Overall Beef Interbreed Champion of Champions at Balmoral Show this year.”

“This was a massive achievement for myself and the herd, as we have been showing at Balmoral since 2000, and further because she was a home-bred cow.”

The family operates a split calving system, with half in spring and the remainder in autumn, which ensures a constant supply of bulls throughout the year.

They sell bulls to both pedigree and commercial herds, with Angus bulls “highly favoured” for their ease of calving in dairy herds. On the other hand, they retain all heifers as replacements, calving these down at 24-months.

The aforementioned 2021 Balmoral Champion is a home-bred 2-year-old cow with her heifer calf at foot.

“Our ideal cow is medium-sized (around 800kgs), has plenty of milk, is easy calved and has all the characteristics of the Angus breed. We cull any females that give problems.”

“The aim is always one calf per cow per year. All cattle are weight recorded through the Breed Plan (EBVs). We are currently keen to use bulls with high growth rates and feed efficiency.”

“Any pedigree or commercial herd needs low maintenance, cost-effective females, and the use of high-genetic merit bulls.”

Using the best available genetics and advocating a selective breeding policy have transpired into success on the show circuit, as the young farmer highlighted.

“The first big success for Woodvale Anberdeen Angus was being awarded 2003 October Perth Champion, with Woodvale Endeavour, the first and only home-bred Aberdeen Angus Perth male champion from a Northern Ireland herd.”

“Angus cattle-related highlights for me were winning both Aberdeen Angus champion and overall beef interbreed champion of champions at Balmoral Show this year with our home-bred junior cow, Woodvale Miss Annie. “

“Another highlight was winning the overall calf champion title at the NI Angus Club Calf show in 2014 with Woodvale Kool Jaguar, who we sold to AI Services.”

Success with the Shorthorn breed includes securing the female champion silverware at the National Show in 2015. Besides, the family also scooped the overall champion title at the 2019 Beef Shorthorn Calf Show.

“I have also had many personal successes as a young person in the show ring, winning several young handlers classes.”

“This included the NI Pedigree Calf fair twice. I now prepare other people’s cattle for shows and sales, alongside working in a local farm store and relief milking.”

Having claimed the above titles and secured bulls in AI, the Co Down breeder summed up the family’s journey to date by outlining what it takes to succeed in the field.

“To be successful in pedigree breeding, you have to be able to see the faults in your own stock.”

“We have consistently culled any females that were not doing as good of a job as we wanted.”

“We are satisfied with the current performance and size of the herd. The biggest focus for us going forward is to keep improving feed efficiency. This is to help meet the goals for lowering emissions.”

“In the future, with all the information available in terms of EBVs and sourcing high genetic merit sires, we will hope to progress to the next level,” he concluded.

- Advertisement -
Previous articleGreen light to ‘make it easier’ to plant small areas of native trees
Next articleReplacement dairy heifers: Get it right or pay the price