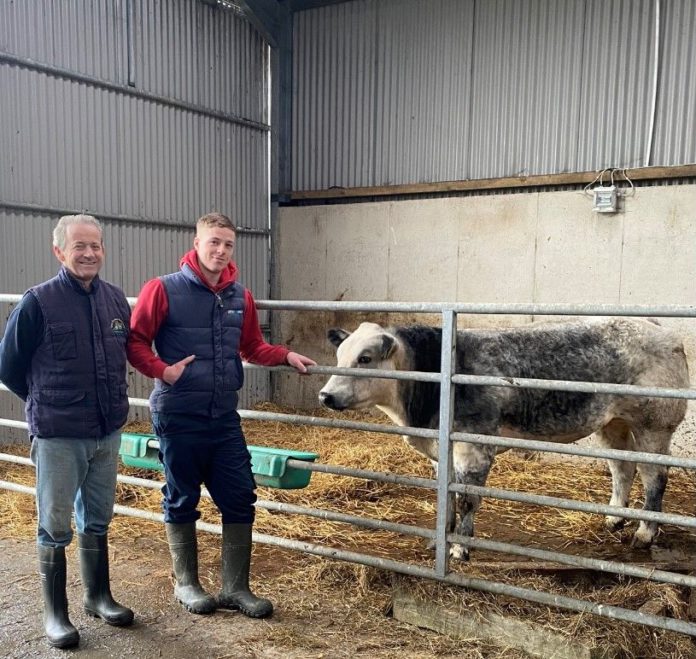 Father-and-son duo fetching up to €6,000 for commercial suckler weanlings

Firstly, their specialised suckler enterprise focuses on maximising each of their breeding females’ genetic potential.

“We keep a few superior replacements every year, and if we see a good U heifer or two on our travels, we try to buy them for breeding too.” Kieran, who works for a local building contractor and completed his Green Cert at Pallaskenry Agricultural College, told That’s Farming.

“In our replacements, the first thing we look for is that she has four good feet under her and is functioning perfectly. She must also have good breeding characteristics such as a good head, long tight body with a good topline, and plenty of width at her pelvis for calving. We calf heifers from 30 months to 36-months-old to give them a chance to develop first fully.”

Cows are mainly U grades with E grade females in the 650kg-1,000kg weight bracket forming the backbone of a fruitful ET programme.

Over the last decade, the suckler farmers have implanted embryos from their best cows into recipients, usually dairy-bred Hereford heifers. Last year, they had five embryo calves and sold four of them with a top call of €5,000 for a 7-month-old weanling heifer.

“These calves’ dams are top-class breeding cows. The three cows are Charolais-crosses with Belgian Blue and Limousin back breeding.”

“Belgian Blue blood brings muscle, Charolais brings power, and Limousin brings style to breed show-type calves to make that big money. This does not happen overnight, but without all three breeds together, it’s not going to happen, in most cases.”

“There is no point flushing a cow unless she is breeding top calves that are going to sell well because it is too costly. To sell commercial embryo calves at €1,200 to €1,400 or even pedigree embryos at €2,000 to €2,500 is a waste of money and time; you are at nothing.”

“Our goal is to get the best possible calf out of each cow. We do not mind if we have to put the calving jack on commercial cows. We find, in most cases, that if a cow has a calf that falls out with no assistance, that calf is not going to be anything special in time to come.”

The duo calves their pedigree females from October to January, selling subsequent progeny the following year at spring sales. Meanwhile, commercial cows calve from December to March with progeny sold at Ennis Mart’s weanling show and sale in the autumn and Carrick-on-Shannon Winter Fair.

The suckler farmers sold five of their heifer weanlings to an average of €2,850 at Carrick Winter Fair in 2019. Their top lot changed hands for €6,000 at 6-months-old, a price tag which is believed to be one of the highest recorded for a weanling heifer in the Munster area.

“We missed the shows last year and had a couple of calves that would have done well; I would like to think. We have had great success showing cattle down through the years winning Junior Pedigree All-Ireland Charolais Calf Champion in Tullamore in 2018 with a Fiston son that went on to sell for €5,200 at 16 months.”

“Also, we have had a couple of all-Ireland commercial calf champions and some overall champions at local shows. Hopefully, we will see the return of shows in 2021, but at the moment, it does not look too good either.”

Despite the cancellation of agricultural shows due to the fallout from Covid-19, the father and son team believe 2020 was their “best year farming-wise”.

“This is only right too because there is a lot of time and effort put into preparing them and it is nice to be rewarded at the end of the day.” the young farmer added.

On the dairying front, the duo generally strive to calve their 50-cow dairy herd from February through to the end of March. A Holstein-cross-British Friesian is the cow-type of choice on this Clare-based enterprise, which operates a 24-month-old calving system.

“I take a couple of months off work from February to April to help with the calving season as it is a lot for one man to handle otherwise. We scan all cows in April before the breeding season to see if there are any problems.”

“We AI twenty of our best cows to sexed semen straws with a 50-60% success rate. Then, we let our pedigree Belgian Blue bull to cows and sell calves when they are one-month-old.”

The Killeens are currently constructing a new cubicle shed with a new-12-unit parlour that can be extended in time if required. They plan to expand the dairy end of their farm to increase cow numbers to seventy.

“The future looks good at the moment in the dairy industry, but I do worry slightly because a lot of suckler farmers are going into dairying, but time will tell.”

“We will never get out of sucklers as long as we keep breeding top quality animals and keep getting on so well. We seem to have a good market for good breeding and show-type calves, so as long as that keeps going, then so will we.” Kieran concluded.

- Advertisement -
Previous articleEar to the Ground meets a Kilkenny farmer with 1,000 ewes
Next articleHolstein cow defies 400,000/1 odds by giving birth to triplet heifers