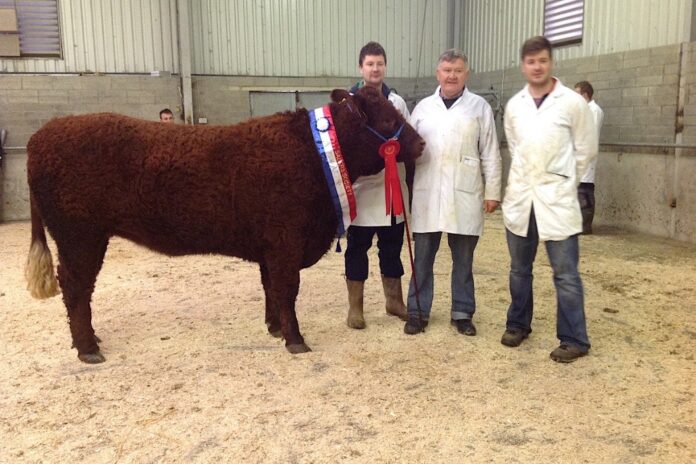 In this week’s Suckler Focus, That’s Farming, speaks to Thomas Mulcahy. He discusses inheriting 50% of his grandparent’s farm, working as an accountant for 35 years, breeding Salers, and rising input costs.

Thomas Mulcahy has worked for over thirty-five years as an accountant and now farms a herd of Salers cows.

His son, Ronan, assists him on the farm, who is currently working in America, and his other son, Cian, an engineer, is currently completing his Green Cert at Pallaskenry Agricultural College.

Thomas spent 18 years in Kantoher Creamery (Kerry Co-op), where he did milk sampling and testing and worked as an office employee in charge of computing.

In addition, he worked as an accountant for thirty-five years with two different firms.

In 1980, Thomas inherited 50% of his grandparents, Michael, and Hannah Mulcahy’s farm, with his brother receiving the remainder of the enterprise.

Then, in 2009, he established Glenmore Salers with an in-calf heifer, Kilshanny Heiti, which he purchased from an east Limerick breeder.

Most of his herd originates back to a 16-year-old cow, Corlurgan Gittle, which he purchased alongside Corlurgan Isabelle on-farm in 2010 from the late Brian Halton, Cavan.

“I was always interested in agriculture. When I worked in a co-operative, it was around you 24/7. I liked living in the countryside and loved the freedom of it,” Thomas Mulcahy told That’s Farming.

“We had a small farm at home, and we milked 16-20, mainly Shorthorn cows. In the 1960s, I hand-milked cows morning and evening. First, we went to the creamery with the milk from a jennet in a horse and cart, and then we got a tractor.”

Thomas put Friesian heifers in-calf each year but found this a “labour-intensive task”.

Before moving to pedigree breeding, he bought Charolais, Belgian Blue and Simmental-cross continental weanling bullocks at 18-months-old and finished them for a factory when they were 30-months-old.

He saw the Salers breed at the National Ploughing Championships. Their appearance caught his eye, which led them to investigate the breed.

He found it would suit his operation because of their size, his land type, with their ease of calving a big seller.

“The Salers cows are reasonably good for milk. I am putting a huge emphasis on improving my milk strains in my cattle at the moment.”

“I feel the more milk your cows have, the better-quality weanling you will produce. They obviously have fabulous mothers.”

In the future, he hopes to branch into using cattle with polled genetics, which he feels will reduce his workload when it comes to dehorning calves.

He uses all conventional AI on his Salers cows and a home-bred Salers bull on some heifers. 80% of cows go back in-calf on the first cycle.

Thomas said after cows have calved 50 days, he will inseminate them.

He runs a stock bull with the Simmental-crosses, which also mops up the herd.

Commenting on the genetic pool of Salers bulls in Ireland available to breeders, he said: “In my opinion, the genetic pool has improved immensely for the last five years. There was a very small pool of straws before that.” 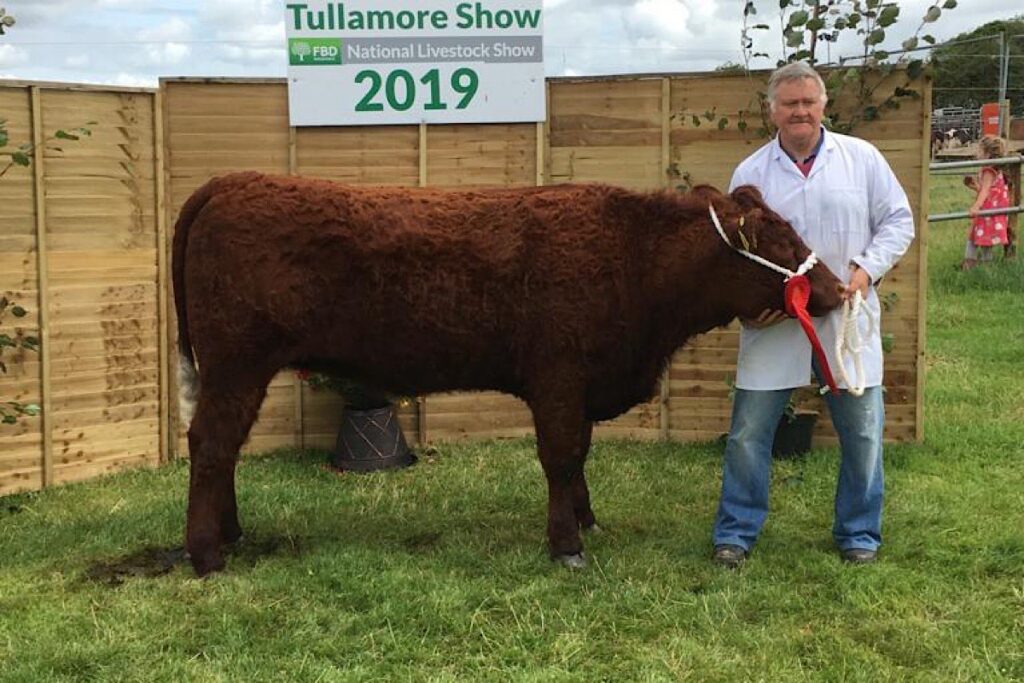 He calves his cows during September and October, which enables him to have September-born progeny suitable for shows, with older cows calving during January and February.

According to Thomas, it is a “historical” tradition that he calves his older cows in January and February.

He prefers an autumn calving and does not cull the older cows so that they will calf in February.

He said as he replaces more Salers cows over the years, he will have a September and October calving pattern with a calving date in August for the Simmental crosses.

“I would prefer to calf all cows in September and October as you are putting in a better calf as he is out for three months, and they are healthier.”

“Whereas when you calve in January and February, calves are inside, and you have a bigger risk of getting disease.”

His motto is to ensure that he gets a calf annually from each cow within 365 days. He culls any cow with difficulty as he feels “they are not profitable”.

The Limerick-based farmer calves his replacements at two-and-a-half-years-old.

“I find I have a more maturing animal at two-and-a-half years old rather than at two-years-old.

“I find two-years-old means you are putting them in-calf at 15-months-old, which is too young. So, I like to have them calving from 20-months onwards.”

“In my opinion, you have a more mature animal, and they are better able to deal with having a vigorous calf under them for eight months.”

According to Thomas, cows require very little intervention during calving.

He replaces up to 3 cows annually with “good” longevity in the herd. He has a strict culling policy for performance and milk production and sells his cull cows in Gortatlea Mart.

He sells up to two bulls for breeding on-farm annually. In 2017, he secured €3,000 for a bull Glenmore Leonidas at the Salers Cattle Society of Ireland show and sale in Mountrath Mart.

“In my opinion, the Salers bull trade is difficult because predominately dairy farmers buy Aberdeen Angus or Hereford.”

“A lot of dairy farmers kept their young calves over the years and then sold them on afterwards. So, there was a bonus for Aberdeen Angus or Hereford calves if they kept them to finishing, which was another plus.”

According to Thomas, the herd has secured numerous junior heifer titles at Tullamore Show down through the years. 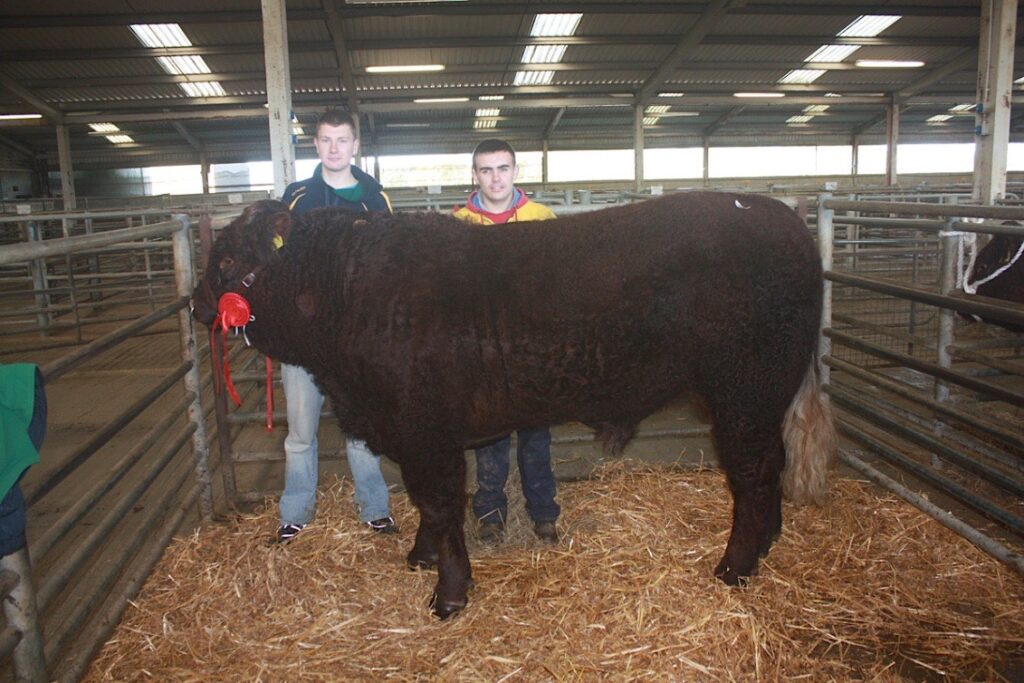 He manages his farm by grazing cattle on their home block of land and housing them for 4-5 months every winter, and feeding silage.

Commenting on what it takes to be successful in pedigree cattle breeding, the Salers Cattle Society of Ireland member said:

“If you want to be successful at pedigree cattle breeding, you must produce a top-class animal, and that is the only body that is going to survive. Salers calving ability is untouchable.”

He plans to continue breeding “quality” cattle and maintain a 15-cow herd – due to housing availability.

In addition, he plans to select some Salers cows to crossbreed and put in-calf to Charolais or Belgian Blue sires.

He said the Salers cow has a “huge pelvic area”, which means they can calf any breed.

Thomas said his long-term plan is to hand over the farm’s reins to his sons.

“Suckler farming is difficult and getting more difficult. This year is going to be difficult because of input costs. Where are heifer prices going to fix when you go selling?”

“It is fine to think that you should get a return and at least cover your costs but for he/she is buying heifers, where are they going to be positioned.”

“I need to get another 20% on my sales price. Is he/she is buying are they going to pay 20% extra this year, that they paid last year? So, we are in a difficult situation,” the suckler farmer concluded.