Declan Bell established his Ballyvonnavaun Salers herd by acquiring Manusmore Grainne from John Burke in 2008 and Clewbay Kate from Tom McGreal after seeing her win the All-Ireland calf competition at the 2011 Ballinasloe Show.

“My mother grew up on a farm. My father grew up in England and came home to Ireland and bought the family farm during the late 1970s,” the Pallaskenry Agricultural College Green Certificate graduate told That’s Farming.

“I used to help out with sheep more than cattle when I was very young, and this is where I got my first piece of independence. Sheep were deemed a safer job.”

He first stumbled across the Salers breed sixteen years ago through his father who worked in Munster AI for many years.

Declan, a second-generation farmer, and his father first saw a sire called Jovial at the AI station, used him on commercial cows, and were “very impressed” by his progeny.

Declan figured that this would work on his cows and heifers because of their easy calving traits, maternal characteristics, and demand for surplus heifers.

“My father was crossing the genetics already, but I brought in the pedigree aspect to the herd.”

“The breed does exactly as they claim they are going to do, and their calving ability is unrivalled by any other breed.”

“They have the largest pelvic opening of all the breeds and are very tough; they will calve anything.”

“Also, they go straight back in-calf, so in terms of their fertility and ease of management. Therefore, they just work for me. If I am away teaching at school and a cow is going to calve, I do not have to stress over it as I know she will calve away on her own.”

“You are getting a premium price for the heifer calf or maiden heifer, so there is a really strong demand for the Salers heifer.”

“My ideal female is 700-750kgs, a good strong medium-type cow, broad, plenty of milk, and docile. The key trait for me is their fertility.”

He mentioned he has a 15-year-old cow in the herd which has just weaned her thirteenth calf, weighing 380kgs.

Declan uses a Salers stock bull, Knottown Raj, on 90% of his herd, which he bought twelve months ago from Stephen Kirwan and bred by Richard Fortune.

The system in place means Raj serves the spring-calving cows in early June and finishes serving autumn calvers by the end of October.

“He is a lovely thick bull and very correct. I saw progeny on Stephen’s farm, and they were very good. He has an excellent replacement index of €195, and his terminal index of €90 is also good too.”

“My wife, Niamh, and I have a young family. Emily is two-years-old, and Katie was just born in October.”

“So, having to put time into heat detection and bringing them in for an AI technician, for these couple of years when the children are small, would be very time-consuming.”

“Running a stock bull takes all that out of it for the time being,” the Salers breeder added.

Declan’s breeding system consisted of a majority of AI before he purchased this stockbull.

Declan hopes to look into using sexed semen and believes “it will be very important for the Salers breed going forward to maximise the number of heifers breeders get”.

He commented on the genetic pool available.

“There are an awful lot of Salers bulls available, and with so many, there are not huge numbers of any bull on the ground. It is hard to see a large number of progeny from one bull.”

“There is something there for everyone, and they are all quite easy calving at the moment. Highfield Odhran (a G€N€ Ireland bull) and FOREZ (Bullbank AI) would be two of my top bulls doing the business for the breed at the moment.” 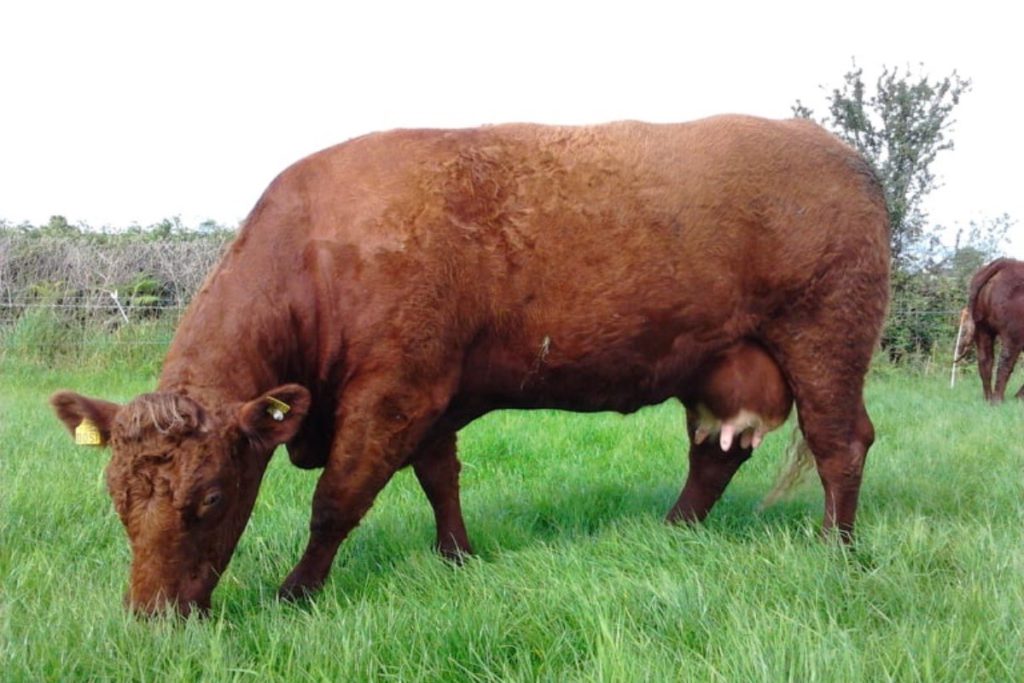 He calves pedigree heifers outdoors in August and commercial cross-bred heifers in March and August.

Declan achieves compact calving as Salers cycle shortly after calving. He culls females that are slow to go back in-calf.

The Clare native manages his calving season by putting cows into a paddock before they calve.

He prevents his autumn-calving cows eating too much grass and becoming too fleshy in the lead up to calving by operating a follower system. Autumn-calvers cleaning out paddocks after spring-calvers.

“My father checks the cows when I am at work, but generally, as long as you see the two hooves and nose coming, you can be pretty confident the Salers cow will calve away and touch wood; there has been very little mal-presentation.”

Declan explained he always operated a spring-calving system but wanted to trial heifers in an autumn-calving system to enable him to have strong calves to sell in October/November in recent years.

“The autumn-calving cows need much extra feeding over the winter with top-quality silage, and calves need a good creep area with straw. So, I will probably go back to March calving from here on as heifers enter the herd.”

He calves his heifers down at two-and-a-half to three-year-old, weighing approximately 650kgs.

“I like to let them grow, but tried calving at 24-months, and it worked ok. However, I found that it holds back the cow for a few years.”

“You are trying to mind her for a few years, and that can mean having to pen them separately for a winter.”

“I think it slows them down. Letting them go to two-and-a-half or three-years-old, they are good and mature, well developed and require less management.”

“They can fight their corner in the shed with the mature cows, and so they do not have to be kept separate.”

He claims his father’s work of keeping the cow-type correct and his contribution of adding Salers to the breeding programme has resulted in more vigour and fertility to the herd.

“There is a very strong demand for the breeding heifer. At the society sale two weeks ago, buyers came from all over the country, including Northern Ireland, to purchase their replacement heifers.”

“Prices were excellent, and breeders were very well paid for top-quality heifers.”

“Ten years ago, you had a much smaller market for the Salers or the Salers-cross heifer, whereas now she has become more mainstream.”

“So, the majority of suckler farmers have some Salers influence in their herd now,” the Salers breeder added.

“Prices are better and especially for the quality animals as you can get some real premium prices if you have the real quality.”

He keeps his best breeding bulls, fertility tests them, and halter trains them to sell as stock bulls at 14-16 months.

Declan sells up to three cull cows per year, ranging from 850-900kg and 12-16 years-old heifers at Gort Mart. He aims for an 850kg animal, with his main reason for culling age.

The Irish Salers Society council member commented on the feeding system for fattening his cull cows being a two-month beef concentrate programme and good-quality grass.

“Males work best in a bull-beef system. I never fattened bulls, but the feedback I am getting from other people who have bought the weanlings is bull-beef seems to be the best way to fatten Salers or Salers-cross males.”

The following include some of the herd’s society sale successes at Gort Mart’s Irish Salers Society show and sale.

Ballyvannavon Oscar was tapped out as a second-prize winner at the 2015 Tullamore Show. A breeder in Wales purchased this bull the same day and has straws from him in a UK AI station.

In 2016, Ballyvonnavaun Penny achieved first prize heifer calf in her respective heifer class at the Tullamore Show and first prize junior heifer at the 2017 show.

He outlined he may move to sell as in-calf heifers instead of weanlings, but his long-term plan is to stay with the Salers breed.

“I can trace my crossbreds back six to eight generations to the first cows my father had on the farm and when I was a young child. I like to have that connection there, so I will always keep the crossbreds.”

The Salers breeder commented on how to be successful in the pedigree field.

“They must tick all boxes, breed right, be top-quality animals visually, and have good figures.”

“You have to have that balance, and that goes for all breeds. Go too extreme on one trait, and you will inevitably have other traits that will be neglected.”

“At the end of the day, a pedigree animal should be able to perform well in a commercial situation.”

He outlined his view on the position of the Salers breed in Ireland.

“There was a huge air of positivity at the Irish Salers Society sale two weeks ago, huge demand, and really good prices paid for quality animals of all ages.”

“I see the Salers breed in a very strong position. The majority of suckler farmers are part-time, and they have a job outside of the farm.”

“People have realised Salers are the best breed when it comes to calving ability and to be comfortable that your cow will calve if you are not there. So, as a result, there is demand like there was never before for females.”

He shared his view on the future of suckler farming.

“Suckler farming is looking a bit precarious, and it feels like we are being attacked from all angles. Sometimes it feels like the suckler cow is being blamed for all evils.”

“I think anyone who is to continue suckler farming will need to have a very efficient cow type.”

“You will have to have a cow-type that is going to calve every 12 months, rear a good calf off grass with minimum input costs, and be very efficient, so there is a future there.”

“I know a lot of the land in the west of Ireland is not really suitable for much else.”

“The suckler cow has a big role to play in the future, but she will have to be the right type. Fertility and performance off grass are going to be hugely important,” the Salers breeder concluded.