Pat McClean of the internationally renowned Roughan herd has bred some of the highest-priced Charolais cattle in Ireland.

The Newtowncunningham, County Donegal, native has spent the last three decades venturing to France, to invest in superior genetics.

He opted to focus on French bloodlines when establishing his now 120-cow herd. This has proven to be a worthwhile venture, for the breeder who has sold Roughan progeny nationwide, and across the waters to Scotland, Wales and even back to the breed’s home soil. 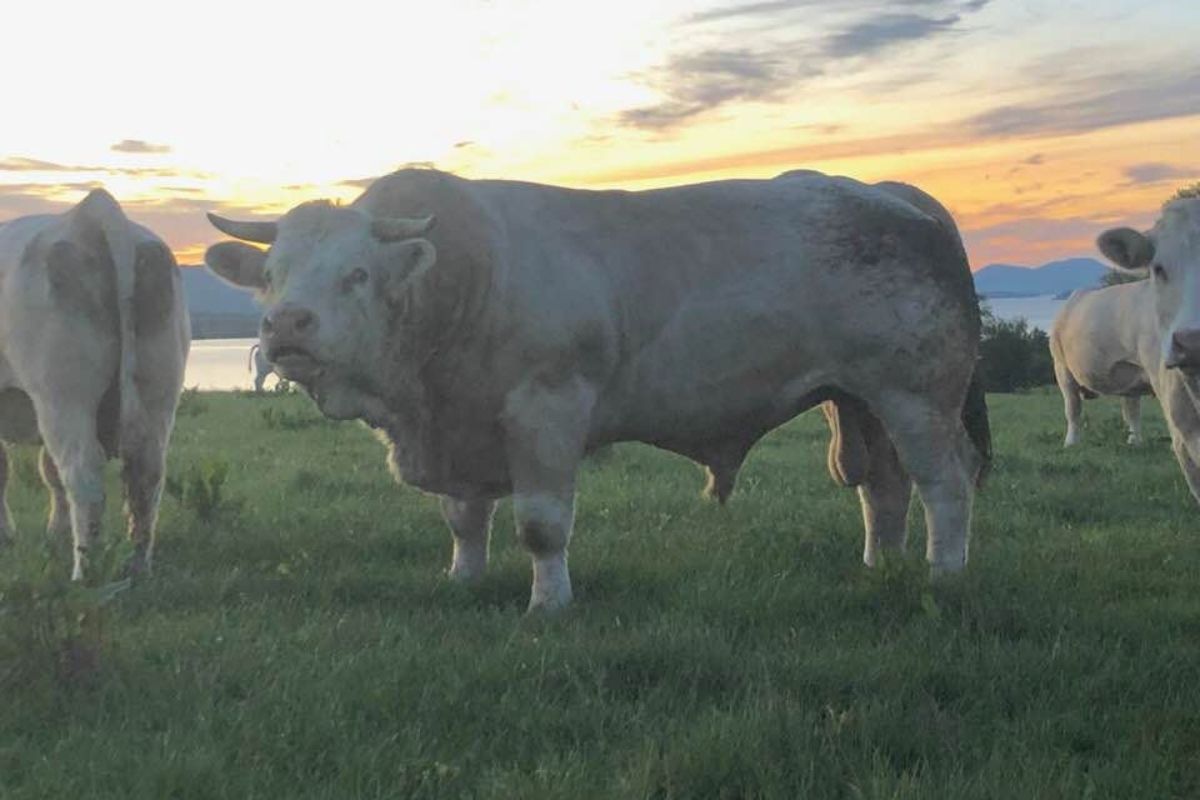 “I started off buying 10 or 12 Charolais females in 1988. I kept all the females that were not suitable for selling and kept all the bulls for breeding. Now, I have 120 Charolais pedigree cows,” Pat McClean told That’s Farming.

“One of the first breeding females I bought in 1988 was called Foyle Evelyn, from a Donegal native. Then, I went to France and bought two Charolais heifers in 1992 off Gaec Merlet.”

“I remember the first French bull, Roughan Faiso, I brought into the herd in 1992, and then Roughan Jordaine came in the next year.”

“The whole foundation stock was all built on French bloodlines. I worked with all French genetics because of their easy calving, easy fleshing ability, and milking ability. In addition, they can calve without assistance and rear their own calf, which is very important.”

Pat first ordered his initial consignment of Charolais bulls and heifers in 1992 in France and has been doing this ever since.

“I probably buy five to six breeding females every year and buy three young bulls every year. Covid-19 has caused a bit of a challenge, but I did get out to France last July. Unfortunately, I did not get out to do any business this year.”

“I hope to get out before the year is out. I buy cattle all over France, and I have bought at sales. I have bought cattle from all the breeders, Gec Kadoo, JC Raymond, and Earle Vania.”

“I try to get looking at the mother and make sure the bull is out of a good mother so that it has a good pelvis, an ability to calve herself and have milk to bring it on.”

“I could be buying calves as young as three-months-old. They could be born in April, and you buy them in June, July, and August. Some turn out good, and some turn out not so good, but it is a chance you have to take. If you do not buy them younger, they are gone.”

“The bull would have good bloodlines, good legs, good head, good locomotion and good functionality, not extreme muscle, just nice muscle. Not the extreme muscle the Irish like because then you have no females afterwards.”

“If it has a nice balance, you will have nice females to keep his cows and nice males to sell for bulls to try to have a balanced animal rather than extreme muscle.”

“The breeders in Ireland breed for bulls all the time, and they forget that they will run out of cows. If you do not breed for cows, you have no bulls to sell. The bulls are different and not related, and there is no relation to any bulls you would have in AI.”

“I sold one bull back to France. The Merlets bought one bull off me in 2016. I sell many bulls to Northern Ireland because I am only 10-miles from the border.” 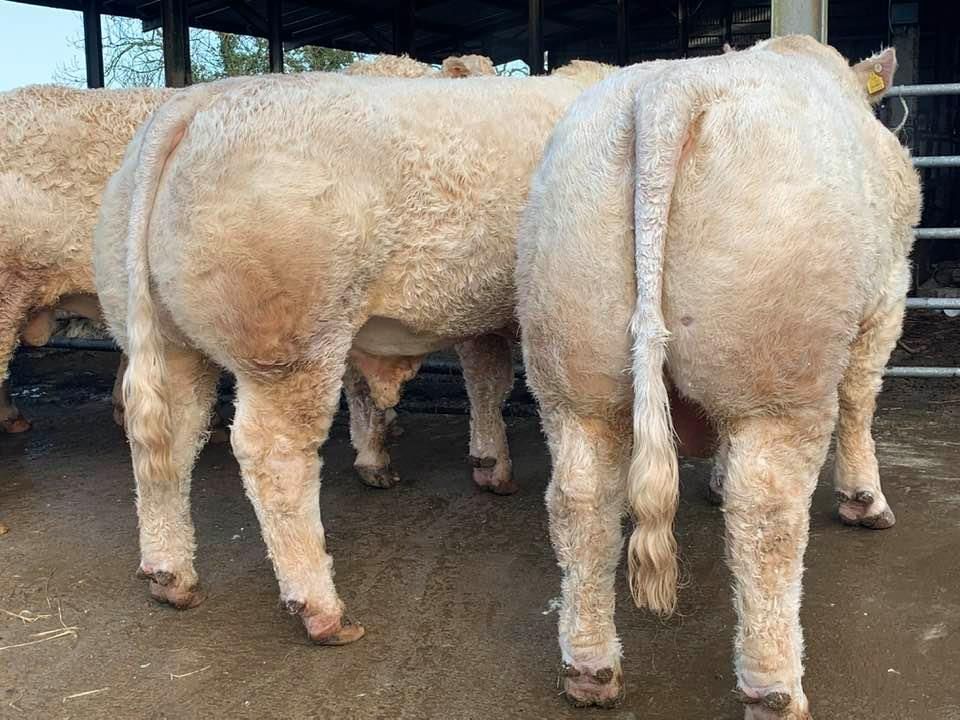 The farm has a mixture of spring and autumn calving, which suits Pat’s farm operation.

Up to 30 bulls will be sold on the farm, with 10 to 12 bulls annually sold at Irish Charolais Cattle Society sales.

Pat has sold bulls on-farm to clients to Scotland, Wales, and France, with a huge repeat customer base in Ireland.

On the other hand, Pat retains 30 females and occasionally a bull but tends to introduce new bloodlines to avoid in-breeding.

“I sell about forty to fifty bulls every year for breeding to pedigree breeders and some commercial breeders.”

“Repeat sales are good for me because I have a great customer base. I am at it so long, and if there are any problems with a bull, I sort it out.”

“The buyers know they are going to be looked after, they are happy with results, and the animal gets time to grow. So,  I do not sell the bulls until 16 to 18 months.

“They suck their own mothers, and there is no freezing or embryos involved. So, I do not find much consistency with embryo transfer; I rather do it the natural way.”

“I had two females at the premier sale this year. was 20-months-old and got €8,000, which was top-price on the day and bought by the Crockaun Pedigree Charolais herd.”

A Salers bull and a Charolais bull¸Roughan Marineo, is to the fore in the farm’s breeding programme. Both bulls have a good easy calving rate with Roughan Marineo, being 4% on beef cows.

“A short gestation is the secret to calving. Certain bulls could calve sooner than others.”

“I do not find not using artificial insemination a disadvantage because they are so much better than the AI ones. The bulls stand out on their own.”

“I have no trouble selling, and it is not a problem. If they were only as good as the AI bulls, it might be hard, but it is because they are so much better. So, it is not hard to leave them behind.”

Pat outlined some of his successes in the sales ring and key heifer and bull contributions to the herd.

“There was a bull called Roughan Verygood. He was very well-bred and left a lot of very good cows.”

“I have another bull, who went last year, Roughan Gibraltar; his mother is out of Roughan Verygood, and his father was out of a French bull called Crystal. He bred many good females and males and left a lot of young cows on the farm.”

“Also, I had two heifers out at the shows in Clonmany, Carndonagh, and Ballyshannon. I got champion reserve every day the animals were out, and they were unbeatable.”

Pat hopes to continue selling his top-quality Charolais animals, consistency, buying bulls with maternal traits and “to improve on quality, not numbers”.

He believes repeat sales of bulls and heifers are the secret to success.

“I hope to have a sale of my own this autumn of breeding females. I know I need have the sale because I have way too many females.”

“I think there is a good future for suckler farming. They are on about the carbon footprint. If you kill an Angus out a Holstein Friesian dairy cow, you have 250kgs of carcass at two-years-old.”

“You could kill the Charolais at eighteen-months-old, and you have a lot more carcass and a lot more weight for the same amount of animals.”

“Therefore, it does not take as many Charolais to do the same job as the dairy animals, so therefore they are more efficient for the carbon footprint.”

“I focus on Charolais in the herd because they are the best beef breed. Whenever your cow is 10 or 12-years-old, you have a good valuable cow that comes into much money for beef.”

“The cattle put on the weight the faster of any other breed, so they are the best all-round beef animal,” the owner of Roughan Charolais concluded.