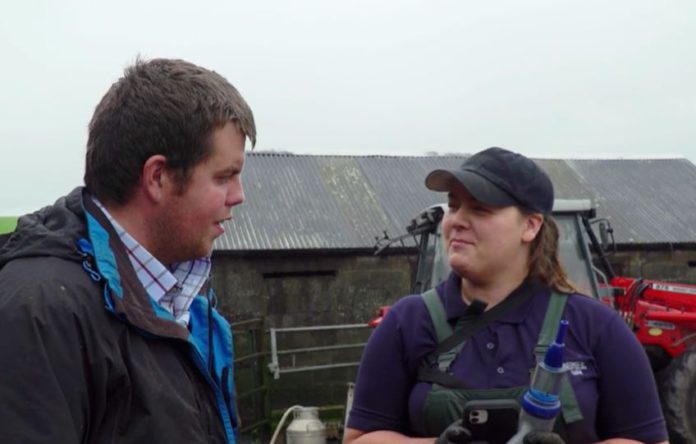 August in the Rare Breed farmers’ world brings harvests, sales, and preparation for new calves, and of course, rain, in the next episode of Rare Breed – A Farming Year on Tuesday, March 9th at 7.30 pm.

In Co. Tyrone, cattle farmer, Des Kelly, is under pressure to bring in the harvest. He has grown barley which he uses to feed his animals, and the straw will also provide good bedding.

Although Des specialises in cattle, he cannot resist the challenge of growing crops in West Tyrone. He harvests 19-acres himself and comments, “It’ll not go to waste, that’s for sure!”

Elsewhere in Tyrone, in Gortin, the Prestons are getting ready to head to Carlisle with 19 animals for the largest sale of Beltex sheep in the UK.

Normally this would be a business trip and a holiday rolled into one for the family. However, because of restrictions, just Kenny and Zara are attending this year.

Kenny comments, “if you want to get a ‘ween o’ pounds’ you need to head across the water”.

He talks about the changes made to the sale and the increased use of online bidding, leaving it difficult to know what the buyers are looking for.

It’s teamwork for the two of them as they erect the trailer to transport the sheep. Headroom is tight for Zara to zone off the upper deck, but Kenny is there with advice and a hammer!

Kenny’s hoping it does not get too warm for the sheep as fans are not allowed at the sale this year.

August is a busy month for the Littles in Tempo, Co. Fermanagh. There are preparing cows for the next calving season.

It is all about giving the cows and calves the best possible chance, as their teats get treated with antibiotics, and they get an all-over scour treatment.

Andrew comments how much they all love working with livestock, as he and Maggie work in the parlour, “You can’t have a job in farming you don’t like; it all has to be done!”

The pair work well together to get tasks completed, despite the ‘Fermanagh weather’, but Maggie laughs, saying, “there’s plenty of crosswords too!”

In Comber, Claire Shearer and partner, Davy, are getting a foal that has just been sold ready for shipment to England.

There is lots to do for visiting vet Cormac Burns, as he microchips the horse, takes hair samples for DNA testing from both the foal and her mother, and fills out identification forms for the horse passport, necessary for travel.

Despite the foal’s beautiful mahogany coloured coat, Cormac can tell that the foal will go grey just like her mother.

An experienced horsewoman in Cheshire, who has competed at the Horse of the Year Show, will train the foal.