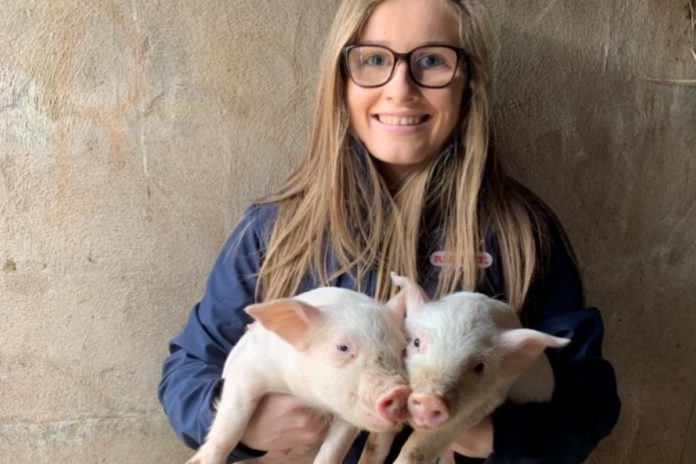 ‘Eighteen years later, I am still around the mart ring’

It was not until Joyce Allen studied agriculture, biology, and business for her A-levels that the possibility of a full-time career in agriculture crossed her mind.

The 19-year-old, who resides on a mixed dairy, beef, sheep, and pig farm, had solely considered combining a career in law or accountancy with part-time farming up until this.

The Cookstown, County Tyrone native told That’s Farming: “Having always grown-up farming, I always knew no matter what I did I would end up farming part-time.”

“My school friends and teachers always knew I would end up with a career in agriculture. I used to take the pick-up to school to check the cattle on my lunch break with a few bales of hay in the back to feed them during the winter.”

“They used to laugh when I would take a day off school, to go to the mart or help during silage season. When studying A-levels, I enjoyed all subjects but found that agriculture was the link between them. Finally, I decided that agriculture was my chosen career pathway to study at university.”

She is currently a first-year student at Queen’s University, Belfast studying a BSc in Agricultural Technology with Professional Studies.

Due to Covid-19, Joyce has had to learn to adapt to the home learning lifestyle, which has allowed her to be on-farm more than she anticipated.

“This was my first UCAS choice, so I was delighted to have received an unconditional offer in the middle of all the uncertainty last summer.”

“I have thoroughly enjoyed the course. We were allowed on campus until Halloween except for a few days on-campus completing practicals, which has allowed me to meet new like-minded friends.”

“The course has touched on all aspects of agriculture, from mechanisation and farm buildings to animal and crop science. I would be interested in securing a placement in either dairying or agri-business.”

“I am helping out with lambing and still get my weekly trips to the mart. Between the online lectures, I also get a chance to pop a batch of scones or a sponge cake into the oven.” 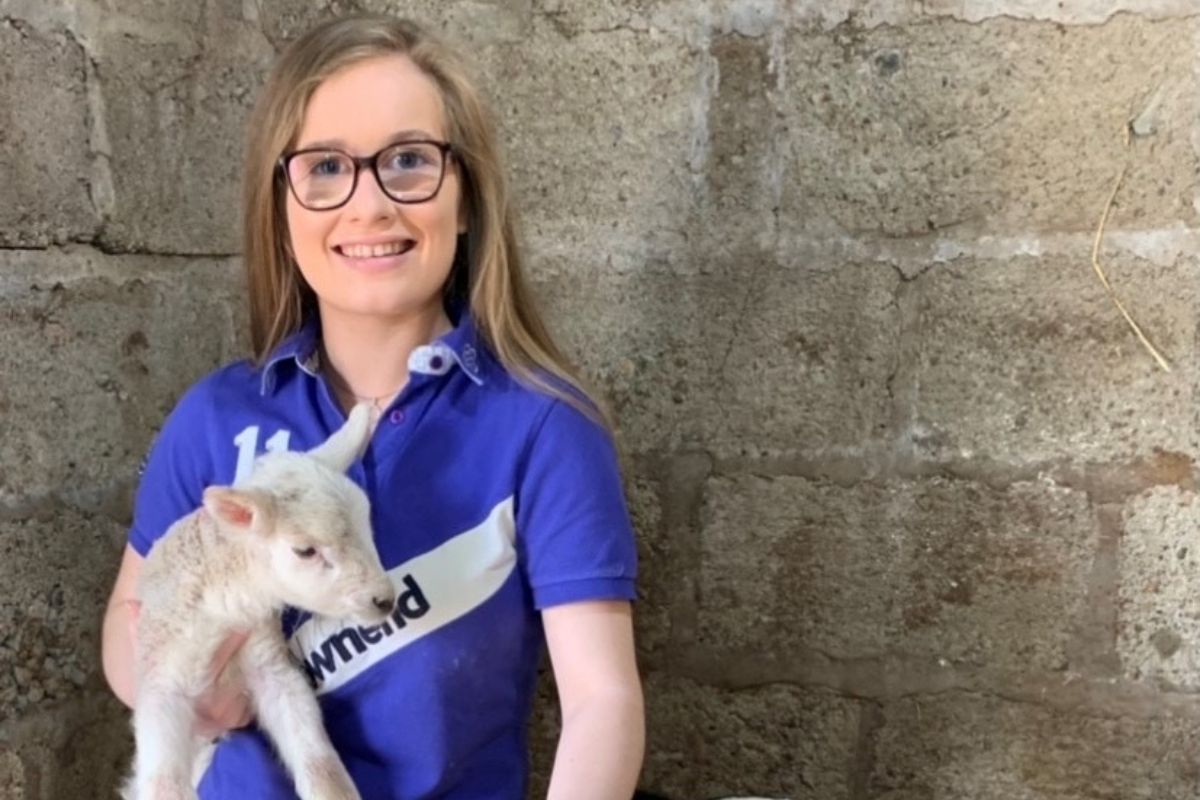 Joyce’s earliest memories revolve around the mixed enterprise which she runs alongside her father, Derek, younger brother, Robert and uncles, Adrian, and Noel.

“My earliest farming memories are with my dad at the markets. I remember I was that small, barely a toddler at the calf sales.”

“I used to sit up beside the auctioneer in the box and look down on the ring whilst my dad bought calves. Eighteen years later, I am still around the mart ring.”

“From no age, I was stuck into everything learning along the way. A funny memory I have was when I was six-years-old, I got tired of gathering stones, so my uncle, Noel, taught me how to drive the telehandler, and he got out to gather the stones.”

Their main enterprise is a dairy herd where they supply Lakeland Dairies, milking an average of 120 Holstein-Friesian cows after suffering a major herd breakdown from Tuberculosis.

The herd performed at a peak average of 3.42% protein and 4.22% butterfat last year. They calf all-year-around with cows turned out to pasture from April 15th.

To increase numbers, for the first time this year, they have begun using sexed semen on all heifers and first-calvers; they utilise conventional semen and beef straws on second calvers and older and have a Friesian stockbull.

“Personally, Jerseys are my favourite breed, and I plan on introducing Jersey bloodlines into the herd for the future.”

“All calves are bucket reared on the farm, weaned and fed. We keep heifers as replacements to calf down at an average of 28 months which we hope to reduce. The bulls are reared and sold around 500kg at the local markets. We also buy in Friesian drop bull calves from the local markets and rear them alongside our own.”

“The piggy bank gets emptied every autumn. My brother and I head to the marts to buy a mixture of Charolais and Limousin weanlings around 250kg from November to February to be ready for the grass in the springtime. We sell the tops of them at local marts as stores and send the remainder to the factory.” 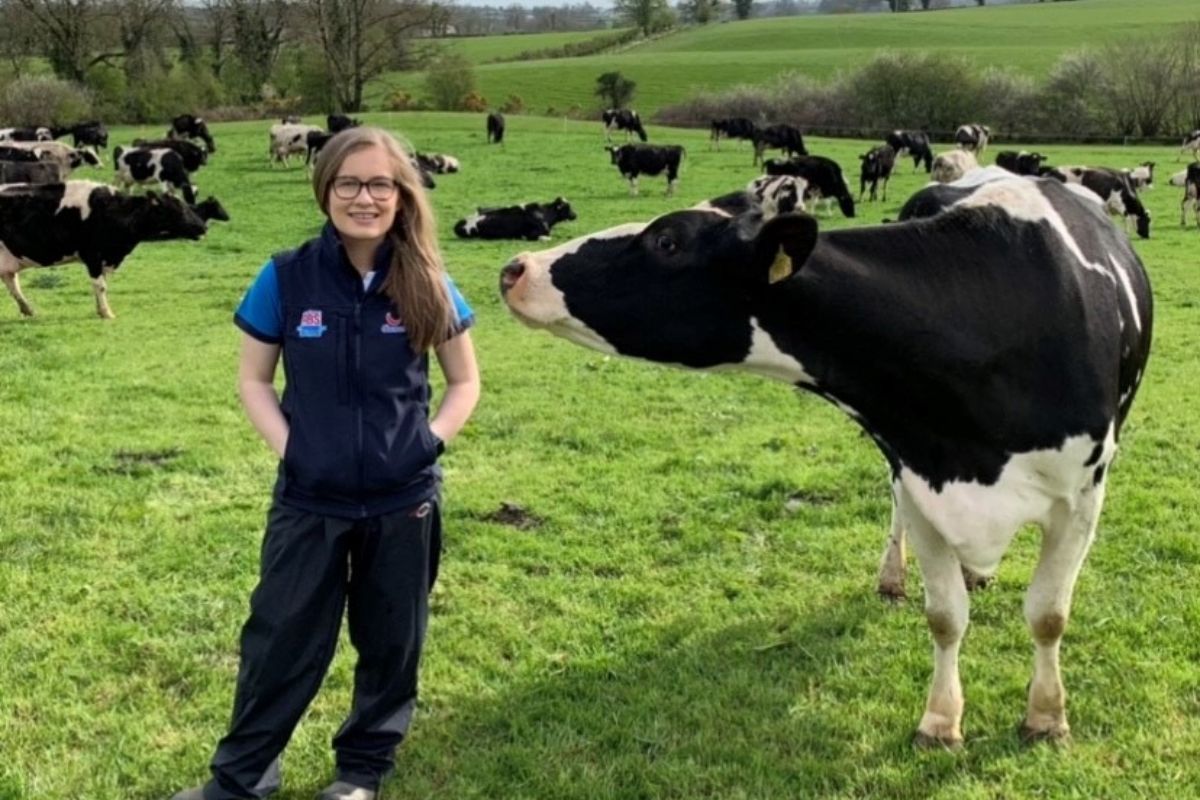 Besides, the family lamb 60 Suffolk-Cheviot ewes annually and sell all subsequent progeny around 21kgs at local marts.

They introduce rams to ewes in November with a Charollais ram put to hoggets and a Texel ram to second lambers onwards.

Ewes lamb indoors, having access to a field beside the yard during the day, before being housed in the evening. Post-lambing, we house ewes and lambs for the first week before we worm ewes and vaccine lambs with Heptavac-P before letting them out to fresh grass.”

Five years ago, Joyce and her brother ventured into pigs, purchasing two Landrace sows with litters of seventeen and eleven piglets.

They then began purchasing weaners from the local mart and springing sows from a local pig farmer to increase numbers. Their herd now comprises twenty sows and 120 fatteners, rearing pigs from birth to bacon.

“On the farm, I get involved in everything from basic animal husbandry tasks of bedding and checking livestock, feeding and milking to rolling, tedding hay, mowing and carting grass during the summer months.” 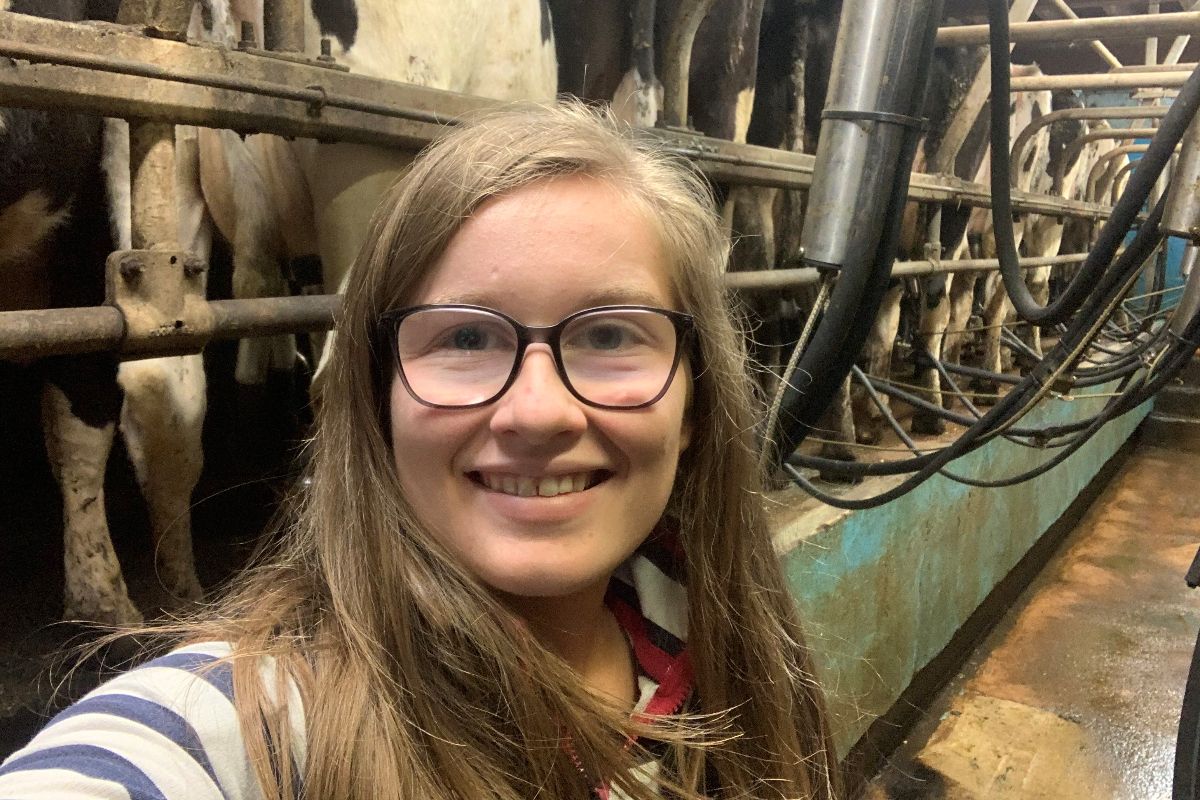 Off-farm, Joyce is an active member of Moneymore Young Farmers’ Club, where she is in her second year as club secretary and public relations officer for County Londonderry Young Farmers.

She is a county representative on the YFCU planning and development and travel committees, which has kept her busy during lockdown with virtual meetings and competitions.

“As a woman in agriculture, I have not experienced unfair treatment for being a female farmer. Obviously, you still get the odd stare when you pull up as a young girl driving a jeep and trailer to the mart.”

“Still, personally, my motto is regardless of gender, both ladies and gents head to the mart to sell livestock that has been well-bred and reared and buy the same quality of stock for the same price.”

“Like many women, my granny, Allen, was a full-time farmer who worked hard her whole life, shaping the farm for the future. I am glad to see women in agriculture getting recognised. They have worked hard farming down through the generations.”

“My advice to anyone entering agriculture is to have confidence, network with other farmers within the industry and have a passion for agriculture. A career in agriculture can take you anywhere,” the Queen’s University student concluded.