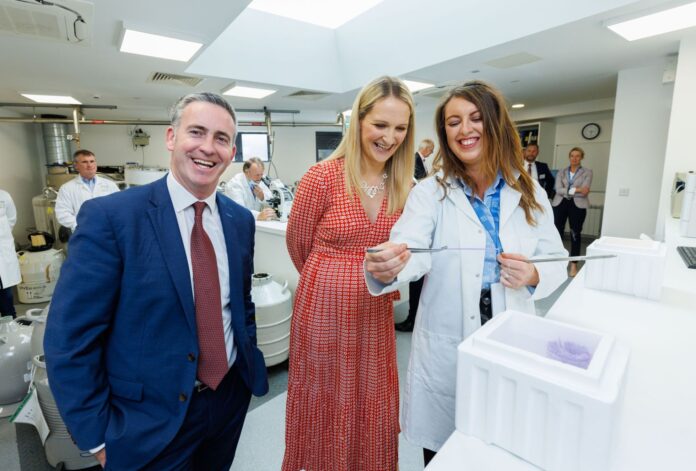 Progressive Genetics has just opened the doors of its new start-of-the-art HQ in Co Meath.

A large crowd, including guests, local Councillors and various officials in the agricultural sector, attended the launch event in Enfield.

He explained their role in keeping Irish agriculture on the “top tier” of the global stage.

“We are very proud to be 100% Irish farmer-owned and of what we do at Progressive Genetics.”

“Following our initial establishment in 1995 and of the Irish Cattle Breeding Federation (ICBF) in 1998, this facilitated the development of the Economic Breeding Index (EBI).”

“EBI is now a well-established measure of progress in the dairy sector. We have made significant gains in genetics in the intervening years.”

This, he revealed, equates to an extra €428 per lactation for heifers calved this year, compared to the heifers of 2002.

He reported that the annual gains in EBI are now trending at €12/annum.

Brendan also commented on a number of challenges, not least the environmental issues where Irish agriculture is “in the firing line” for contributing to greenhouse gas emissions.

He pointed to research by Teagasc, which shows that for every €10 increase in EBI, there is a reduction of 1% in GHG emissions per kg of milk solids as well as improving the profit per cow by €20.

“This is where Progressive Genetics plays its part by providing farmers with the technologies to reduce their herd’s carbon footprint and become more efficient and profitable.”

He stated that the technologies of AI (including sexed semen) and milk recording are key to genetic progress.

“We complement them with herd health testing from Independent Milk Laboratories (IML) and our farm software tools from Agrinet.”

“Today, we provide services across 20 counties with a team of 150 AI technicians and 120 milk recorders.”

Furthermore, Progressive Genetics has also been participating in and investing in sexed semen trials since 2013.

This year saw the establishment of a sexed laboratory in Moorepark, which facilitates the availability of its “top” EBI bulls during the peak breeding season.

Progressive Genetics chairman, Donal Murphy, told attendees that by replicating the genetic gains of the last two decades, we can create a “bright” future for the Irish livestock sector.

“Rest assured that Progressive Genetics is ready to play its part. I am certain that the state-of-the-art facility we officially open here will be instrumental in providing that bright future.”

At the launch, Minister McEntee complimented Progressive Genetics on their farmer-centred approach and contribution to Irish agriculture and the local economy.

She said the science and innovation that is “at the heart” of the sector and the work farmers do are “phenomenal”, and Progressive Genetics is a “huge part of that as well”.

“It is brilliant to see a farmer-owned co-op based here in the county of Meath build a business that employs some 300 people across the country.”

“Technicians are driving into farmer’s yards up and down Ireland from Belmullet to Bunclody,” she added.

Following the opening ceremony, guests viewed the new building and “got a sense” of the investment in the latest science and technology in bovine genetics.