Regardless of increases in input cost prices, maximising lifetime performance and achieving maximum performance from grazed grass are “essential” to improve key profit drivers on beef farms, a national beef conference has heard.

Dr. Paul Crosson of Teagasc Grange spoke about profit drivers during his address at the state agency’s national beef conference at the Shearwater Hotel, in Ballinasloe, Co Galway, on Tuesday, December 13th, 2022.

In relation to production costs, he advised farmers to undertake measures to extend their grazing seasons, calve their herd in the spring, optimise winter feeding and efficiently compactly provide replacements.

For output value, he highlighted the importance of optimising live weight performance and maximising stock rates according to farm constraints.

He explained: “With regards to suckler systems, what we want to do is calf compactly in the spring so that as cow demand increases and indeed as calf demand increases throughout the season, we turn out to pasture and we have a high nutrition, low-cost feed. We want to get cows on that system as soon as possible.”

“Of course, we have some very efficient specialised autumn calving systems, but by in large, spring-calving is the lowest cost way we have of producing beef.”

“We need to provide replacements and 60-80% in terms of optimum genetic progress, so we do need to be efficient. Also, we need to reduce the number of the replacements we require.”

He also shed light on research conducted by Teagasc Grange, which looked at animal-level profit drivers for suckler calf-to-weanling systems and suckler weanling-to-beef systems and GHG emissions for both respective enterprises.

Crosson said that for a suckler calf-to-weanling system, the number one profit driver that influences performance is the age of first calving, as emphasised by his colleague, Colin Byrne, at the event.

In the content of suckler weanling-to-beef, the number one factor driving profitability is daily gain in cattle production systems, he told the conference.

Crosson then further discussed ADG and pointed to a comparison from 2012-2021 among heifers (suckler or dairy-beef), steers (from both also) and young bulls.

From 2012 right through to 2021, there have been “really good improvements in live-weight performance”.

“Sometimes, I think we are slow to point out where we have made progress and improvements. Look across the lines; 4-5% on the heifer sides, that is reasonable performance over a 10-year period.”

“As for steers, a +10% in life-weight performance in that period, and young bulls with an 8% improvement on the suckler side and 1% on the dairy side.”

He said it is difficult to solely identify what drove improvements to current levels, but he listed a number of possible factors.

He first pointed to carcass spec, which through the QPS, came into force into 2009.

That will, he outlined, have had an impact on slaughter weight in its attempt to “get animals into the specs at an earlier age”.

He also listed herd health programmes through AHI (Animal Health Ireland), genetics – €uro-star reviews, the BDGP, genomics, the delivery of information through advisory and KT schemes, and producer standards through Bord Bia’s SBLAS since 2017 as contributors. 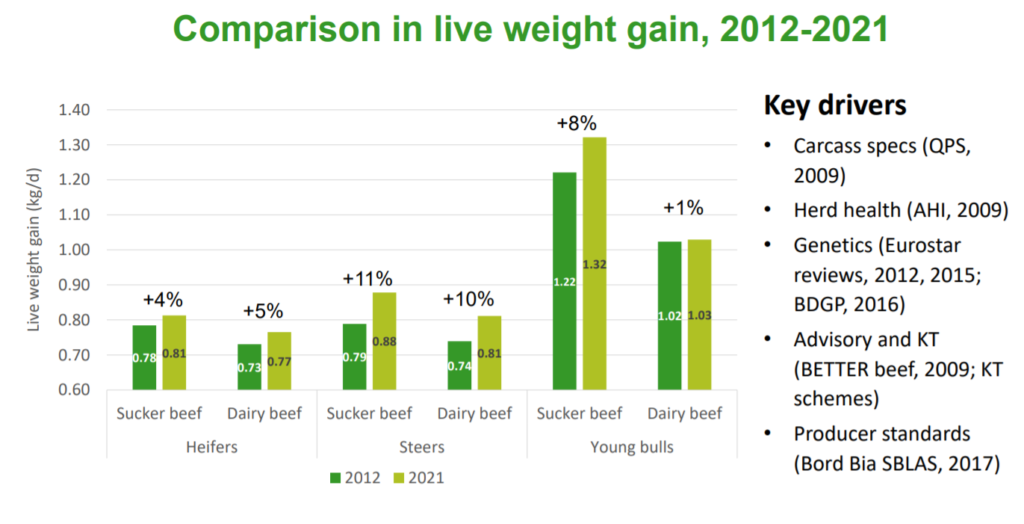 - Advertisement -
Previous article
The Red Shepherdess: ‘No matter what your background, we can all succeed’
Next article
‘We are slaughtering animals at the same weight, a lot younger, with less feed’ – Teagasc beef leader