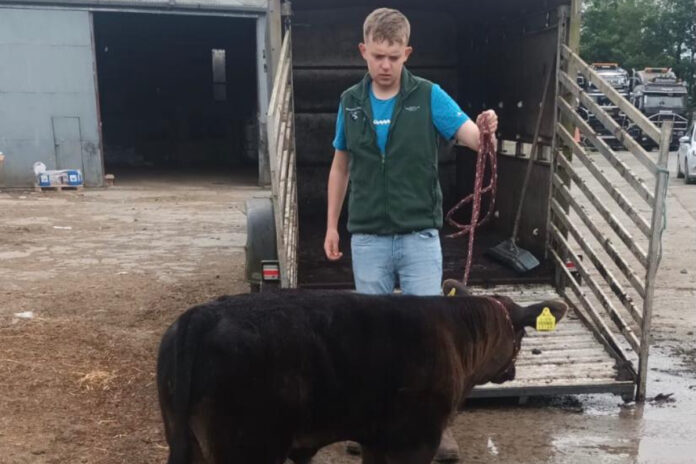 “I am 21-years-old, farming full-time in partnership with my mother, Noeleen McDonnell, since January 2021 in Tenure, Monasterboice, Co. Louth.

We farm 150 dairy cows on 270-acres of heavy ground in Tenure and 13 pedigree Aberdeen Angus cows (plus their 13 calves, 3 in-calf heifers, 1 maiden heifer, 2 young bulls and a stock bull) on 60-acres of relatively dry land under the PRIESTOWN herd prefix.

However, for this interview, we will focus on the Angus arm of our farm.

Both farms are within a mile of each other and less than a 5-minute drive from the M1.

The M1 goes through the land in Priestown, and we sold about 10-acres in the early 1990s to allow for its construction through the farm.

Alongside my mother and I, my grandad, Noel McDonnell, who handed the dairy farm down to my mother, is a great help to us on the farm.

He is a very hard worker, and it is fair to say we would be lost without him. My father, John, also helps with some of the machinery work too and works off-farm.

The farm in Priestown has activity on-farm dating back to 1899 and possibly even before it.

My grandad grew up in Priestown, and they had a dairy farm; in those times, they milked cows in byres. In its day, Priestown was a very productive farm with pigs, poultry, cattle and sheep.

The remains of these sheds are still in the yard, and if I ever won the lotto, the first thing I would do is restore the yard to its former glory.

In the 1970s, he bought the farm in Tenure, which needed a lot of work, and he renovated it and started milking cows there.

In October 1988, when he visited the Rainbow Hills Ranch in Canada and bought three Pedigree Angus heifers, the Priestown Angus herd was established.

These heifers did not reach their new home in Priestown until February 1989 but were worth the wait.

They also bred some of the best pedigree cattle that were in Tully Performance Test Centre at the time, beating all other breeds for growth rates.

Sometime later, in 1995, my grandad, along with a few others, were involved in setting up the now world-renowned Progressive Genetics.

This came about following the acquisition of ‘Dublin & District Milk Board’, which had been involved in cattle breeding since the 1950s.

He was chairman for several years. Last week, he was a proud attendee of the official new opening of their new headquarters in Rathcore, as the firm had outgrown its old offices. 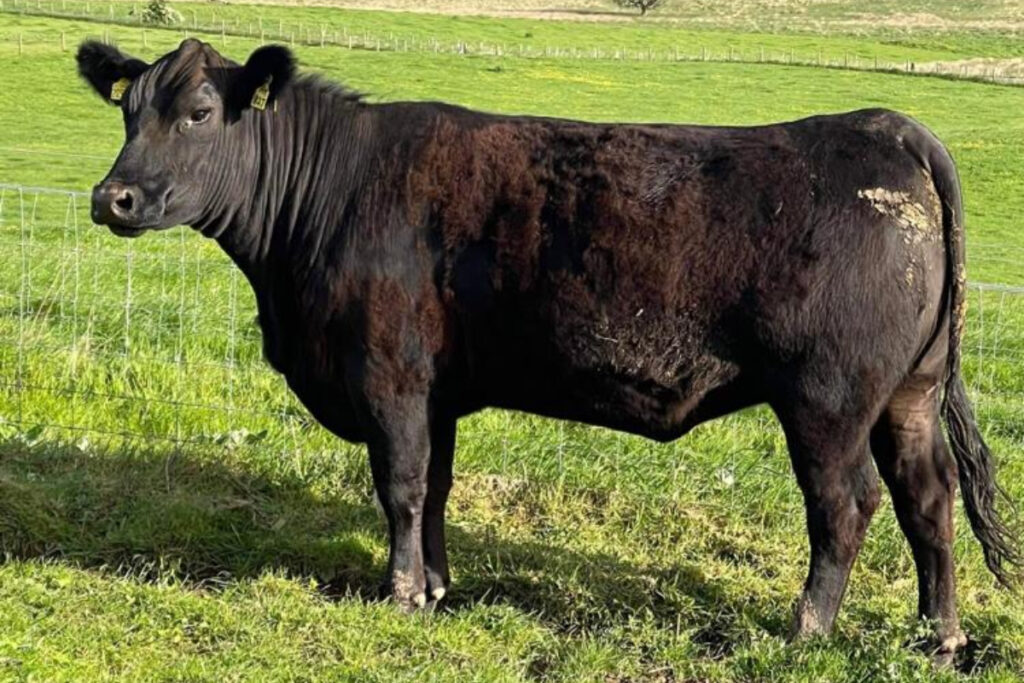 As the years went by, the Priestown herd became a well-known herd thanks to the excellent work my grandad had carried out along with help from my mother.

My grandad believes bulls and heifers “should not be pumped with meal and should be let grow naturally”.

When bulls he sold went to work, they never lost condition due to being allowed to grow naturally.

Bulls were sold at 18-24-months because of this at society sales across the country and to breeders and dairy farmers in the local area, which resulted in several repeat customers and great friends made as a bonus.

Heifers were sold from the yard as foundation females for new herds and as an addition to existing herds.

They were also exported to countries such as Portugal and Spain, and this was carried out by Leo McEnroe of Lisduff Angus.

My grandad had built up a herd of roughly 40-50 pedigree Angus, all of which descended from these three heifers he purchased in Canada and using AI sires at the time.

In recent years, my grandad made the tough decision to reduce his numbers as the dairy farm had expanded.

I was lucky enough and very happy to buy the remaining 4 Angus off him in late 2020.

At the time, I had Hereford-cross cows that I reared as calves from the dairy herd.

In early 2021, I sold these, and in April of 2021, I bought my first pedigree in-calf Angus heifer from the Knockmountagh herd of Eamon & John McKiernan.

Sired by Steil Knockranny, she was in-calf to Knockmountagh Poker, an AI bull standing in Progressive Genetics bred by Eamon and John.

He has an exceptionally short gestation of 272 days. She is now a great breeding cow, rearing her second calf, and her fertility is excellent. She has a calving interval of 320 days, and just last week was served to popular AI bull, Drumcrow Reeko.

A few weeks later, I returned to Eamon and John to buy my stock bull, Knockmountagh Trickster and another heifer.

Just like all the McKiernan family, Eamon and John are great cattle breeders and have a vast knowledge of pedigree breeding.

They have been a massive help to me as I now set upon building my own pedigree herd.

Later on, in the year, I bought from established herds such as Goulding, Mill Valley, Castleard (John McCabe) and Drumcrow, both privately and at sales such as the Irish Aberdeen Angus Association premier sale. 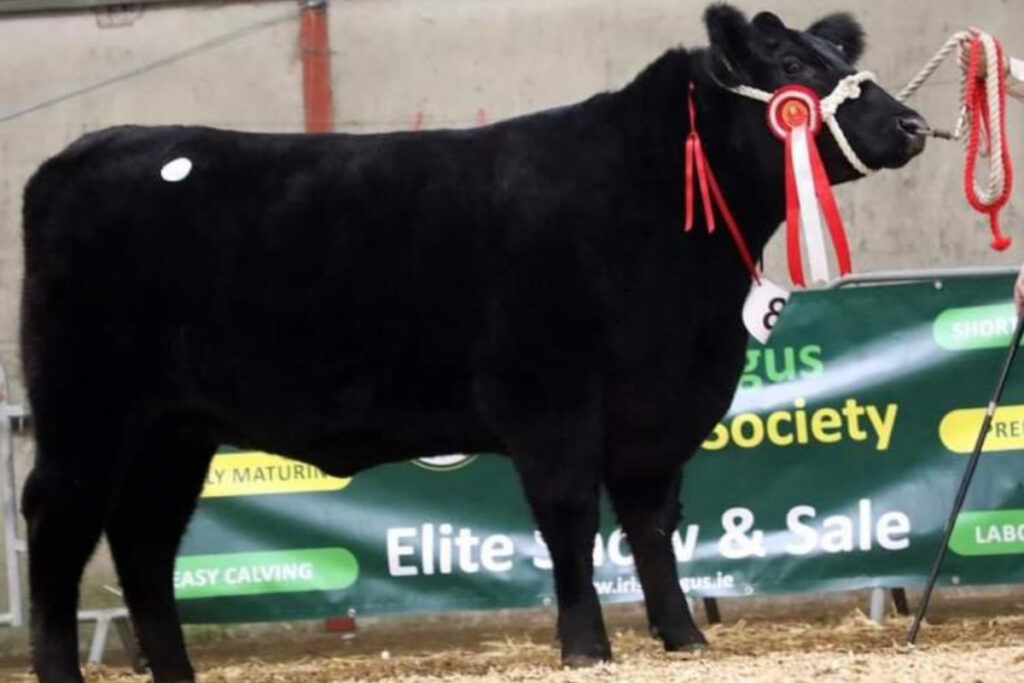 In December 2021, using the money I had received from the Young Farmer Scheme, I bought Steil S Geraldine 400 at the Irish Angus Elite.

She is a superb, deep-bodied Angus heifer with great length and a great Angus head.

She was first in her senior heifer class on the day and is the type of heifer I could spend all day looking at.

Anyone that comes to look at our cattle always picks her out from the rest.

In March of 2022, I turned 21, and I visited the famous HW Netherton Angus herd.

Netherton has been at the top of Angus breeding world for a long time now, having exported breeding stock to all continents.

In 2011, they joined Highland Wagyu to form HW Netherton. The farm is 25,000-acres with roughly 600 head of Pedigree Angus cattle.

Not only are the views breathtaking, the cattle and handling facilities of the highest standard you could ever imagine, and the McLaren family are very nice people.

They were very welcoming and had great time for me when I visited.

I was thrilled to purchase HW Frances W243, an in-calf heifer that comes from one of Netherton’s top cow families.

Both the dam and grand dam of the heifer were the Scottish national heifer calf champions in 2015 and 2013, and the great grand dam was the highland show female champion in 2013.

The sire of this heifer is Netherton Americano (AA4057), a very popular bull in Ireland and the UK.

He has bred many sales champions, and he himself was bred in Netherton.

In June, the heifer arrived in Ireland and has settled in very well within the herd.

My most recent purchase came in July when I acquired Carrigroe J Lady Heather and her bull calf at the Appelbe Production Sale.

The cow is a proven consistent breeder with progeny making high prices.

One daughter sold to Gigginstown Angus, and another daughter bred the champion of the Irish Angus Elite Sale.

The cow’s mother is Carrigroe Dakota, who was once the highest index Angus cow in Ireland. In February 2016, she had a replacement index of €304, respectively. 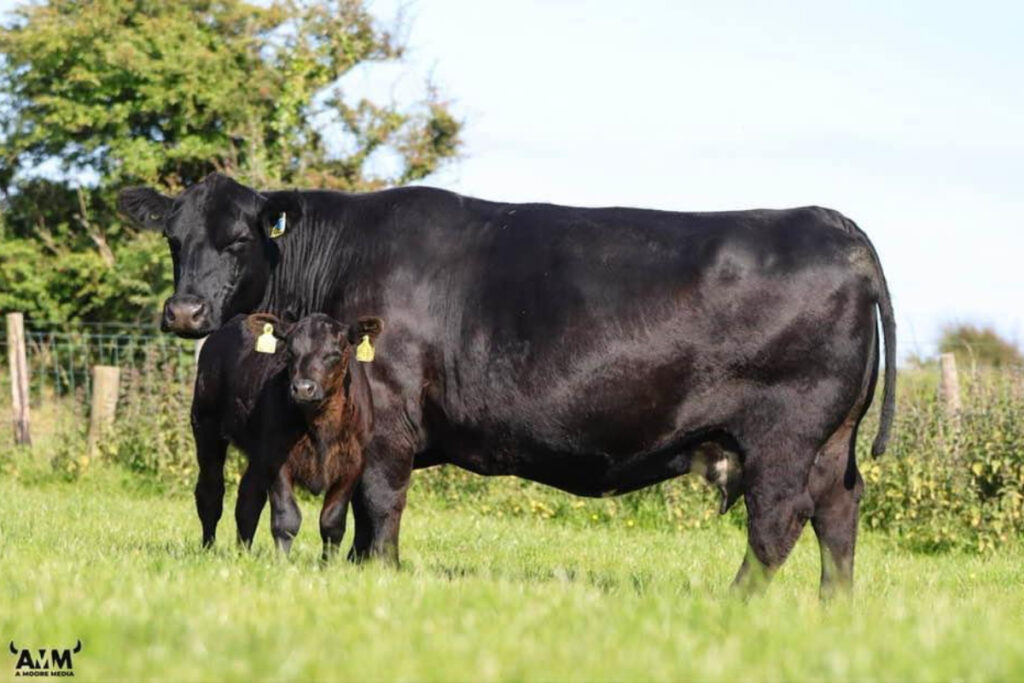 Calving was generally all-year-around, meaning that we sold all year around.

However, in later years, my grandad and mother had tightened the calving season to spring and autumn. This year, I had 13 cows/heifers calve down in spring, mostly unassisted, apart from one that required assistance.

Furthermore, this autumn, I have 3 heifers to calve to my stockbull.

Going forward, I hope to use a mix of AI and stock bull and calve heifers around 24 – 28 months.

The main reason we chose the Angus breed is that since we do not live on the farm, we needed a breed that can calve easily.

If it is a thing a cow is calving during the night, we can rely on the Angus cow to calve herself and the lively Angus calf to have that get up and go and suckle the cow, which you may not see in other breeds.

A small live calf is much better than a big fancy dead calf. The Angus will grow like weeds. 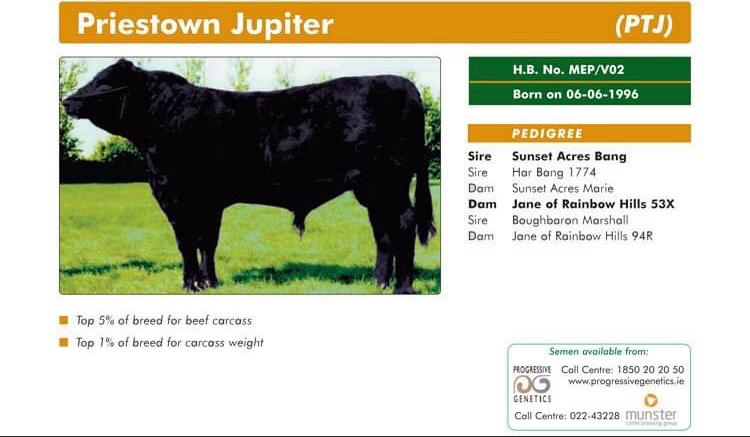 From my own point of view, when buying Angus, I look for three things: breeding, physical appearance and now €uro-star indices.

I like to see older breeding in the pedigree of animals, bulls like Drumcrow Joker or Bohey Jasper etc. (there are too many bulls to name).

Next, the animal must look like an Angus – a good Angus head is the most significant factor here, especially the ears.

Finally, I am not overly pushed when it comes to €uro-star indices. However, stars are important nowadays as many purchasers will not buy the animal unless they have good stars.

Obviously, not everyone will agree with me, but the main point I would try to get across is that there are so many different types of Angus.

There is the traditional Irish Angus, or the American-type Angus, which I think will be popular in the future due to their exceptional growth rates.

However, once you have the one you like and a market for them, that is the main thing.

You have to breed something you like but also something that sells as if it does not sell, you will soon get fed up with it. 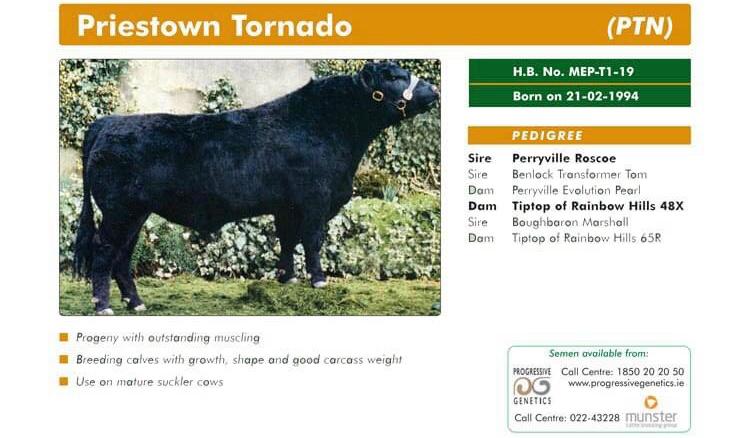 Going forward, I would hope to breed Angus with older breeding but also with good €uro-star figures, a balance between the two if I can.

I am very happy to have taken over the Priestown Angus herd, and if I am half as successful as my grandad, I would be delighted.

In the future, I hope to have bulls and heifers good enough to go to sales and shows throughout the country.

Furthermore, I hope to promote the breed to potential new breeders and showcase my own herd. I hope to attend Youth Development Programmes across the country.

Niall Lynch of Crann Mor Angus organises these to help cattle breeders from any breed prepare for shows and sales.

I hope to travel abroad to meet Angus breeders and see Angus herds in different countries. 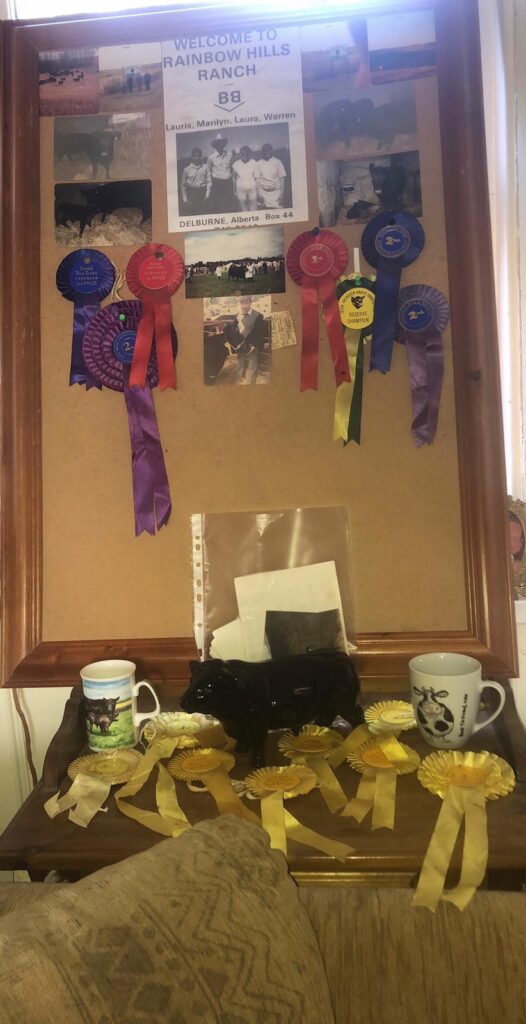 I am only relatively new to the Angus breed, so I am far from an expert, but I have a great interest in the breed.

My only regret is that I should have started breeding Angus cattle sooner.

Recently, I made my debut appearance on the show circuit at the very well-organised Oldcastle Show.

On the day, I secured fifth place in a twelve-strong class as part of the Irish Aberdeen Angus Association’s All-Ireland finals.

This marked what I hope will be the first of many shows for my growing herd and I.”