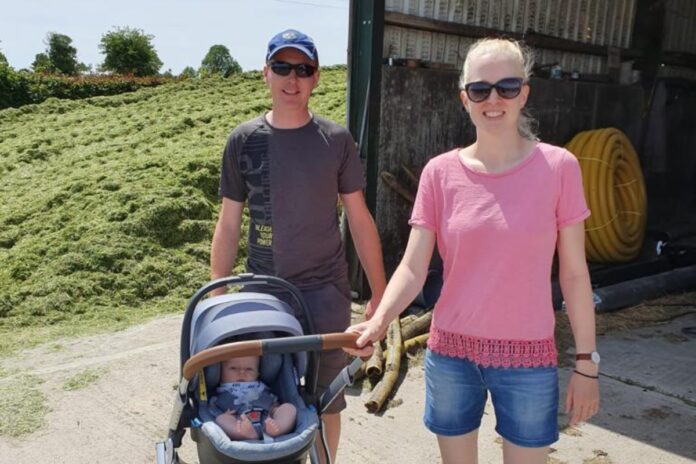 In this week’s Farmer Focus series, That’s Farming speaks to Portarlington suckler farmer, Conor Mitchell. We discuss balancing full-time teaching and farming, how he got involved in the farming industry, compacting his calving season and his ambition to produce quality stock.

Conor is a full-time secondary-school teacher, the owner of a music school and suckler farmer managing a 46-strong suckler herd across 90-acres.

The secondary-school teacher has taken responsibility for managing his grandfather’s (92) farm in Portarlington.

He is a third-generation suckler farmer who hails from Cooley, Portarlington.

The Mitchell family relocated to Cooley 60 years ago. The transition from Athy to Cooley was provoked by the tragic loss on the farm of Conor’s great-uncle.

In recent years, Conor’s grandfather had left the farm to his uncle. With other commitments, he then took full responsibility for the farm.

The production of poultry on his grandfather’s farm was the initial factor to spark his interest in the farming industry.

“My farming career initially started with hens and then we went on to produce 100 turkeys for Christmas.”

Conor and both his brothers were then gifted a heifer by their grandfather. He purchased the shares of the heifer from his brothers.

Following this, he then purchased a further six heifers that year.

However, the first calf he bred from the heifer won first place in the Tullamore Beef Expo a few years later.

“This is when I started getting into cows. Then, ten years ago, I purchased a purebred Charolais bull at the Tullamore Charolais sale. He cost €4,500.” 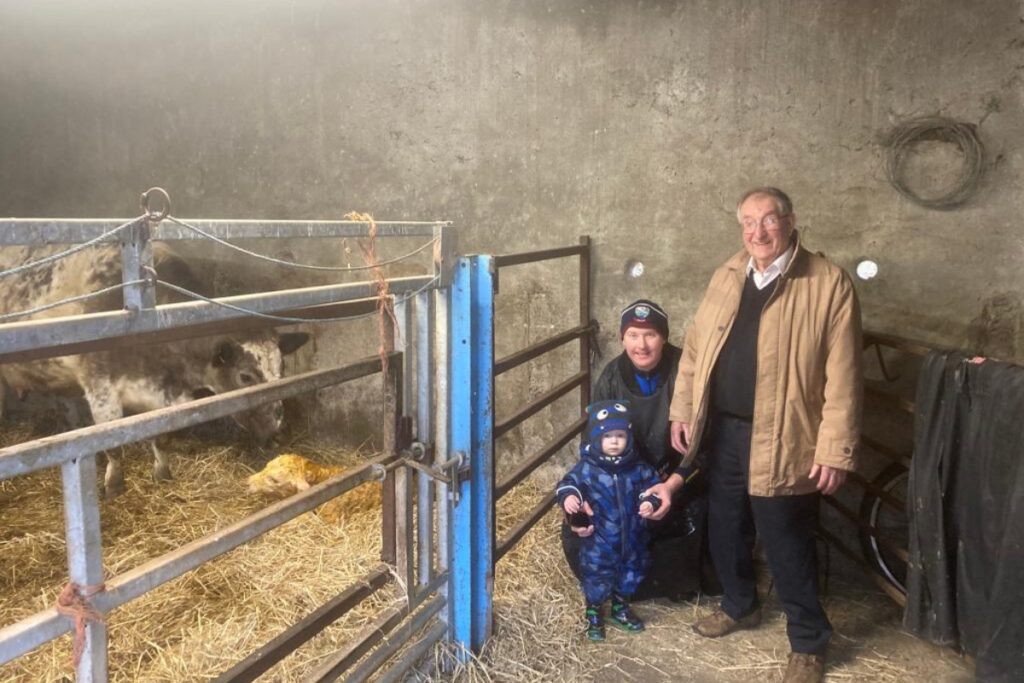 Help on the farm

With Conor’s already hectic schedule, juggling his teaching career between schools, as well as his 2-year-old son, Luke,  he welcomes help on the farm.

His 92-year-old grandfather is a huge asset when it comes to assisting with general on-farm duties.

“My grandfather has an iPad with the calving cameras installed on it. He is out every morning to give updates on the farm.”

He also has a collaborative help arrangement between himself and one of his co-workers, who is also a teacher and suckler farmer.

During the calving season, both Conor and his co-worker employ a neighbour to check cows during the day while they are both at school. 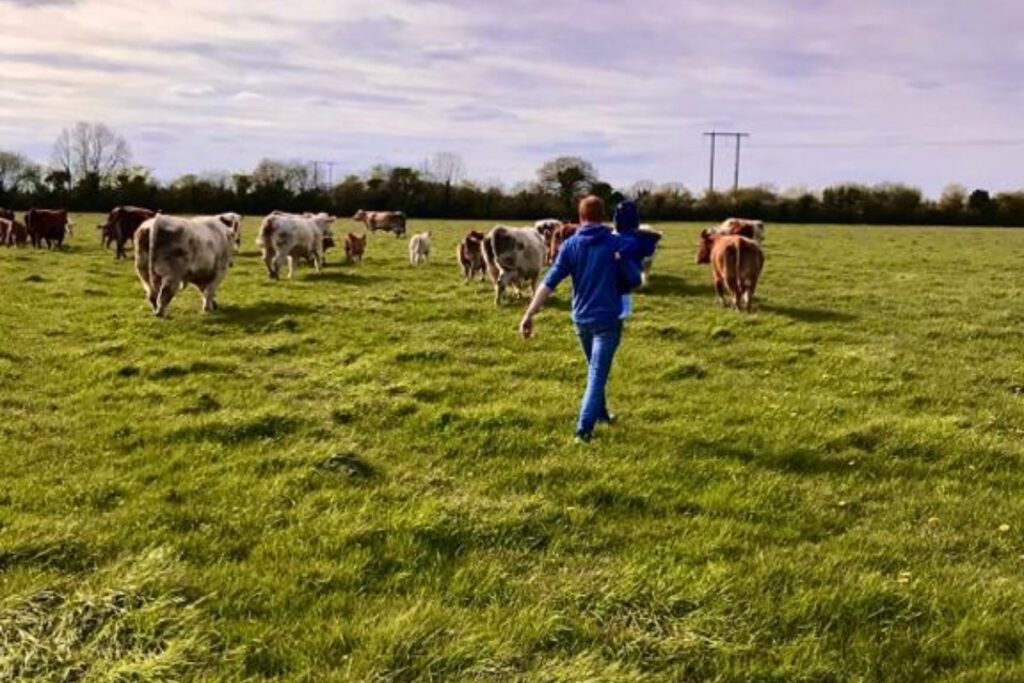 Since entering the suckler industry, Conor has adopted both autumn and spring calving on his farm.

However, he has found some downfalls to adopting this calving practice for several different reasons. The main reason for the transition to spring calving was to allow for an improved work-life balance, enabling him with more family time.

“We had too much trouble with mastitis in summer. It also left us burnout, as we were calving year-round.”

This transition will enable him to step towards a 365-day calving interval.

The plan for weanlings this year is to sell them -October time. He does not retain any heifers for breeding as he prefers to buy in replacements from local marts, such as Edenderry.

“We have a Kilkenny-based buyer purchasing the bull weanlings. He sells the remaining animals in Tullamore Mart.” 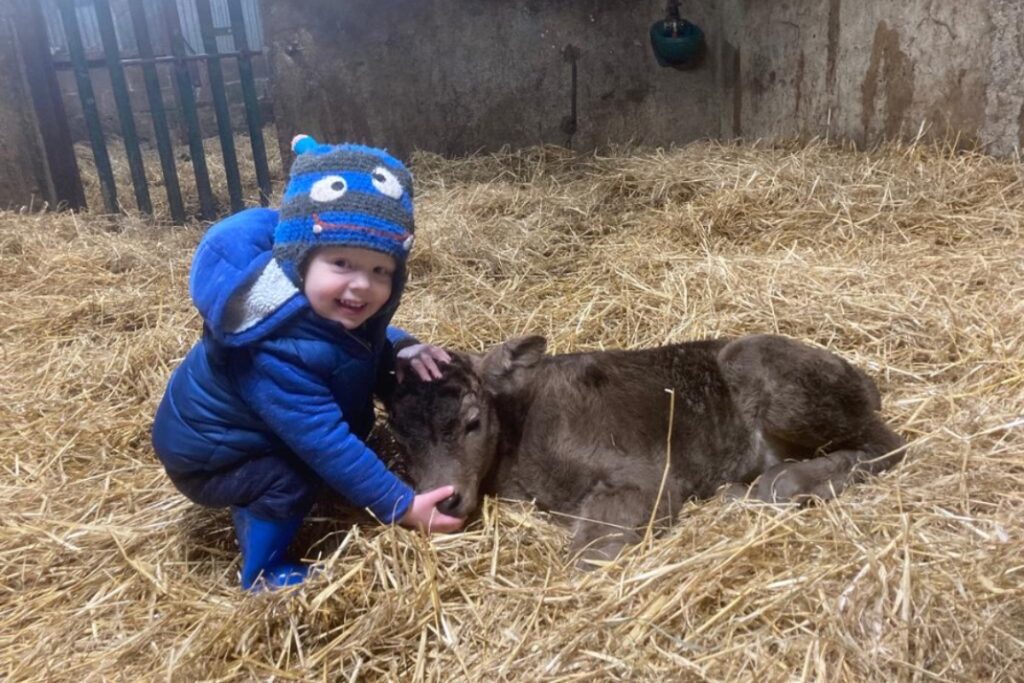 In previous years, he had issues surrounding stock bull fertility and as a result, became heavily reliant on AI services.

In May last year, Conor purchased a pedigree Charolais bull by CF52; he has had no such issues.

“We have started AI on cows, which sees 16 served to date. 25 cows will be served with one round of AI; then the stock bull will be put out with the cows at grass.”

The farm will calf 46-cows in total, of which 10 are pedigree Charolais. He only uses Charolais bulls on his breeding dams, whether that is through the use of AI or his own stock bull.

“This year, we aim to start calving around Christmas time. The plan is to have calving completed by the end of March.”

“In an ideal world, to compact our calving season, we would start calving the week before Christmas and have all cows calved by St. Patricks Day, which is hard to achieve.” 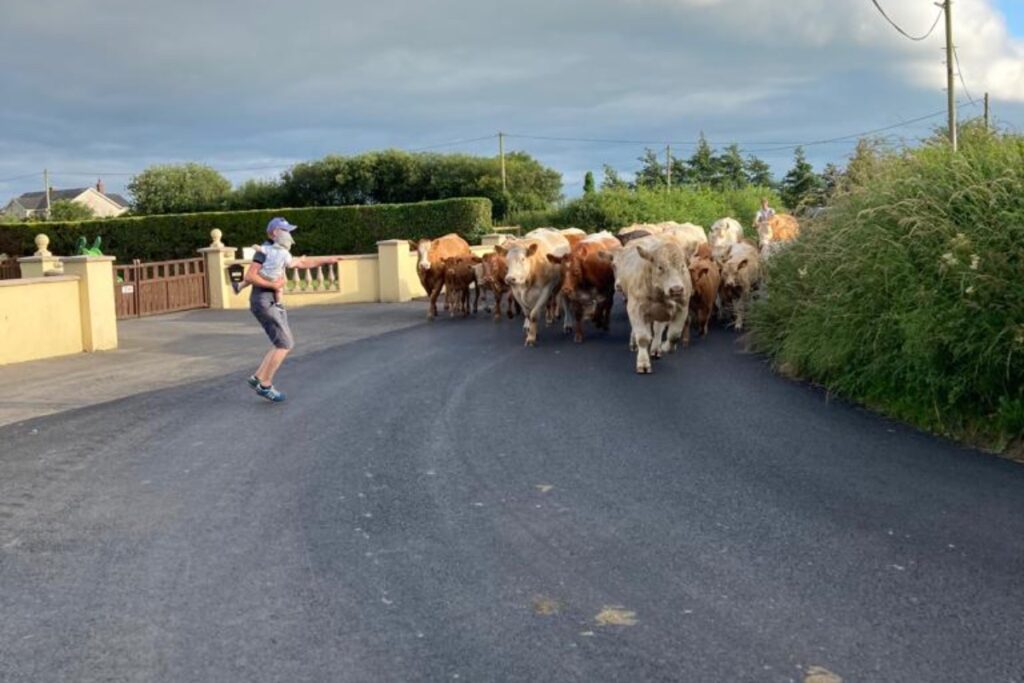 Conor aims to keep the best possible genetics in his herd.

“I aim to produce U-grade weanlings. These animals I believe will always make money, quality cattle will hold their own.”

To breed quality progeny, he had set targets for the dams. He uses pedigree Charolais, pedigree Limousin, Limousin-crosses, Belgian Blue and Simmental for breeding purposes.

“I have incorporated these particular cows into my herd because of specific traits. Specifically, the red Limousin will produce a nice roan calf when crossed with the Charolais bull.”

“I have chosen the Charolais due to their good temperament and their plentiful milk availability.”

Moreover, for Conor to produce an elite calf, he uses Charollais bulls on all dams within the herd.

“My target to finish progeny also includes producing such calves without the introduction of meal. Calves are not fed meal until 6-weeks before weaning.”

“I like a U-grade cow, but she needs to have milk. I am ruthless when it comes to milk; no milk is no cow.”

“I handpick heifers to buy in as replacements. They must have a milky background.”

Furthermore, he chooses not to calf-down heifers at 24-months.

“I like heifers to be stronger and bigger for calving down. Many may not agree with me, but I prefer heifers to calf-down closer to 30-months. I find when they are stronger, they cycle again must quicker.”

In terms of culling, any mad animals, cows or bulls are culled for safety on the farm. This is critical for Conor as his elderly grandfather and young son are both active on the farm.

“Grassland management for suckler farming is vital. Our farm is low-lying, and we are lucky to get animals out around St. Patrick’s Day, ” Conor tells That’s Farming.

Conor incorporates a rotational grazing system on the farm for the suckler herd. He divides all paddocks into rotations around the yard, to allow cows to stay with the bull.

Hay is cut on the out-farm, which comprises 33-acres.

“Any fields with excess grass are topped, and the fodder is baled. I always tend to end up with a lot of feed, but I would prefer to have more rather than less.”

“The paddock system works out great on the farm; the cows always have a fresh bite. I find it always quietens them down as they are not on a big run, and Grandad walks through then maybe three to four times daily.”

“If you do not have good grass with suckler cows, it’s a waste of time,” Conor explains to That’s Farming.

He intends to build up the herd by increasing cow numbers; furthermore, he plans to put a particular focus on breeding.

“Picking well-bred cows is essential, and so is AI.”

“Do not be afraid of the size of a heifer for breeding and pay the extra bit more. I would say to anyone considering entering suckler farming, do not give up and stay at it.”

Conor concludes, “my aim for the future is to produce the best weanling going forward”.