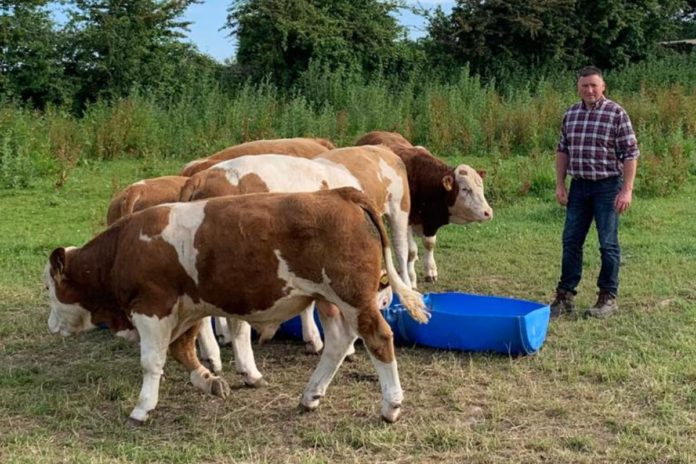 In this week’s Suckler Focus That’s Farming, speaks to John Hession of Portroyal Simmentals. We discuss how he established a polled Simmental herd from scratch, importing stock from various countries and breeding a bull which is now a best-selling sire in China.

That is the view of Mayo native, John Hession, who has travelled the world to establish and fine-tune his progressive polled Simmental herd, which he farms under the Portroyal prefix.

“The bull is popular because he is very muscley. Typically, they look for a red and white bull, but this bull is a little bit more orange than red. However, he is still very popular because of his shape and muscle.”

“Portroyal Kratos P has been sold to an American AI genetics company, and they are selling semen in China. He is flying the flag high for Irish genetics. I have sold two other bulls overseas to the same AI station, a bull called Portroyal Lazarus-P.”

The crest of a major wave worldwide

According to the Mayo man, there are almost 16 million Simmental cows in China now.

“The Asian market wants Irish genetics because of the muscle we have implemented into the breed.”

He noted that the world market is seeking “slightly bigger framed cattle, particularly for the Asian market, where the Irish beef market is looking for a smaller fast producing animal”.

“Irish Simmentals need to also work or on our gestation length and reduce the birth size to compete with other breeds.”

“Polled has outshot the horned; for years, there was not much polled genetics. So, I worked to develop several new lines, trying to get more and more polled genetics every year.”

The polled Simmental specialist, who runs a 340-acre farm (40-acres of which he leases), has exported heifers and bulls to the Czech Republic, UK, and embryos to Denmark.

Supporting the third-generation farmer in the venture are his partner, Maeve and three children, Lucy, Reeva, and Jessica.

“I try to modernise the Simmental breed, which would be less restrictive going forward and speak with people of other breeds.”

“I always had commercial Simmental, and I have always liked to use a lot of AI in the past. So, I started investigating Simmental and discovered polled in the Simmental breed.”

“I travelled to Australia and America to investigate what they were doing there with polled, and then I went to Europe and saw it done in Europe.”

“I chose polled animals because the farming population is getting less labour involved, and labour is becoming very hard to find on farms. So, it makes perfect sense and with the welfare issue involved too.”

“Across Europe to dehorn calves, you must have a vet, and the farmer cannot do it themselves. Ireland and the UK are going to see farmers not allowed to dehorn calves. There is a cost involved with that when the vet must do it.”

John purchased a herd of polled cows from William Gilmore from Ardadoney Simmentals at a dispersal sale in Northern Ireland.

“I bought William’s cows, and I used that as a foundation and sold all my commercial cows. Ardadoney Cathy was one of his good cows, and Ardadoney Velma P was one of the best cows I got from him.”

“Portrayal Caoimhe was one of the breeding females I bred myself. Portrayal Friday was another very good cow that I produced myself. So, they are two of the first foundation females on my own.”

Each year, John transports four cows from Europe and purchases a stock bull annually and has travelled to other countries including Australia, America, Sweden, and Denmark.

“The bulls I buy in Denmark are all tested in Viking Genetics test centre. One bull is called Berkesig Malthe- P. Birkesig Malthe- P has a world record for weight gain.”

“The bull was 842kg at 12 months. I have been using his daughters, which are proving to be exceptional heifers.” 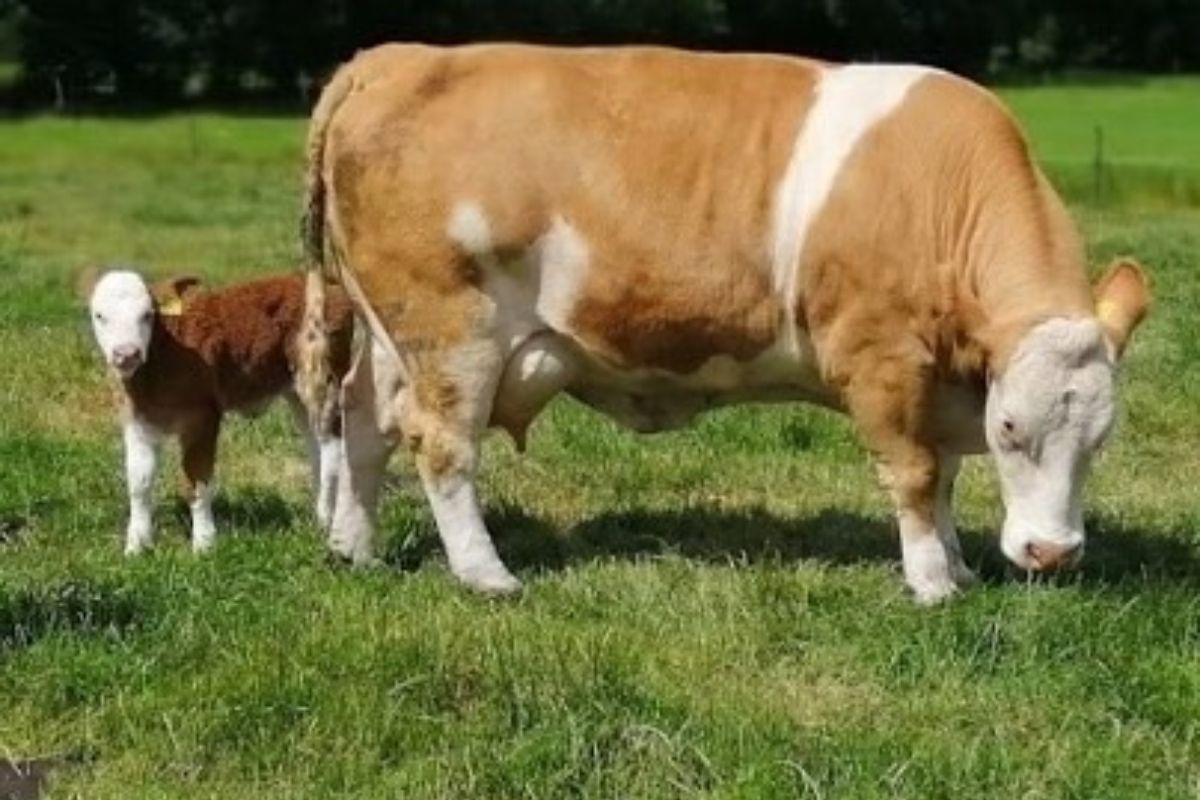 John’s number one characteristic of the breed is polled; milk is his second one with a third for growth and confirmation.

“My ideal cow would be a cow with a good, wide correct pelvis and a good udder with four teats placed in the correct order.”

“Good legs and a good ability to walk over rough terrain and fertility would be high on the agenda too. I want a good fertile background.”

In 2020, John completed purchases of older polled cows in Denmark, which enabled John to begin his first embryo transfer.

“One particular cow that flushed very well is a cow called Holm Fanny – P. At the moment, I am picking three more cows to flush again this year. I am bucket rearing Simmental calves off dairy cows for recipients.”

“I have six calves going into next year’s program, and I have six heifers reared from last year to put in again this year. So, every year I raise six calves to put the embryos into.” 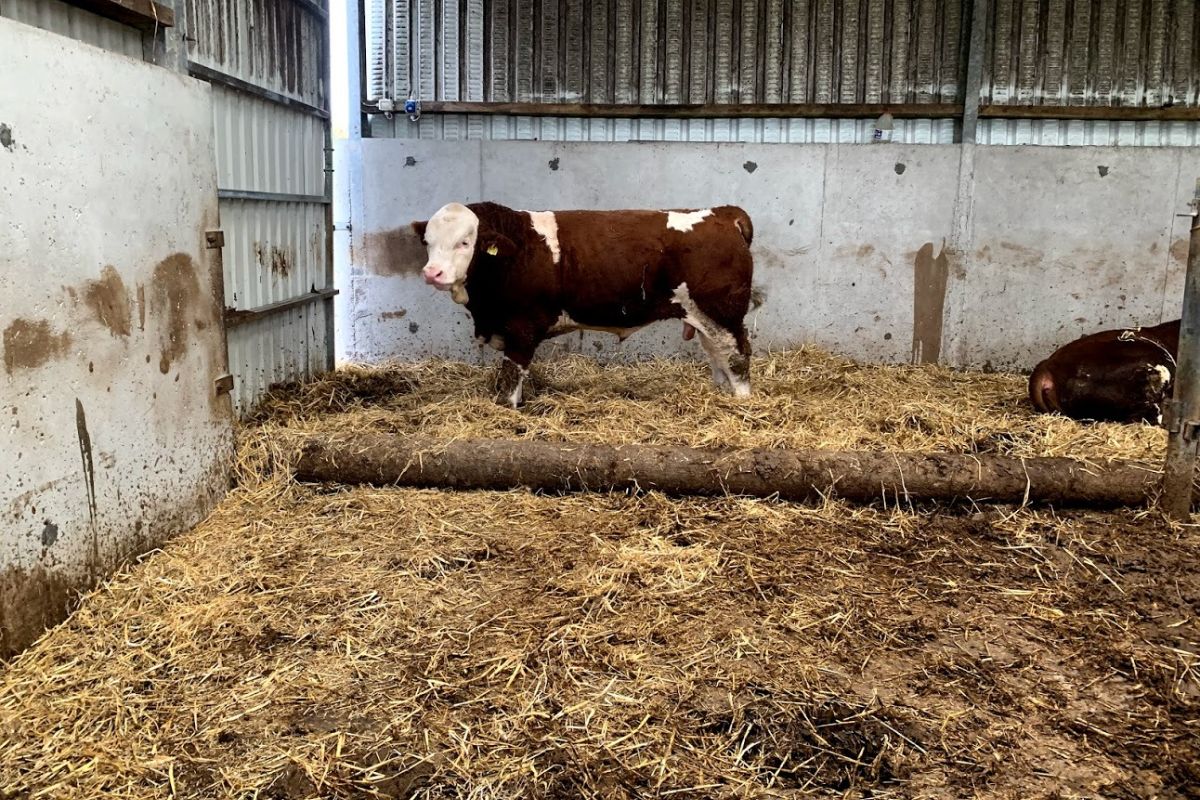 The farm operates a spring and autumn-calving system and includes the months of May, June and December.

“I changed my calving system to May and June because of my work. I calve again when I am off at Christmas, so it is not really autumn.”

When buying a stock bull on the farm, John harvests 160 AI semen straws from the bull for his use. In addition, he harvests semen by way of an on-farm collection from a high-quality home-bred bull.

These bulls include Portroyal Lazarus P, the aforementioned Portroyal Kratos P, and Portroyal Kilalla PP. The annual figures on the farm, are 60% stock bull and 40% artificial insemination.

“I use a lot of Czech Republic semen lately. When I find a good polled bull, I will buy the bull. I will use it on the farm for a while.”

“I pick out heifers for my own replacements, and I sell surplus ones depending on what the customer wants. Usually, I sell heifers in September and October. I would easily sell 20 heifers off the farm every year.”

“I typically keep about 8 to 10 heifers for breeding every year, and I sell the surplus. Then, any bulls that I do not feel are good enough, I will feed them for the factory or sell them as weanlings.”

“I sold a very successful bull to Dovea Genetics called Portroyal Gilmore – P. I had a few years selling polled bulls at home. Also, I have sold quite a few bulls to an overseas to a businessman over the last couple of years, particularly interested in Irish genetics.” 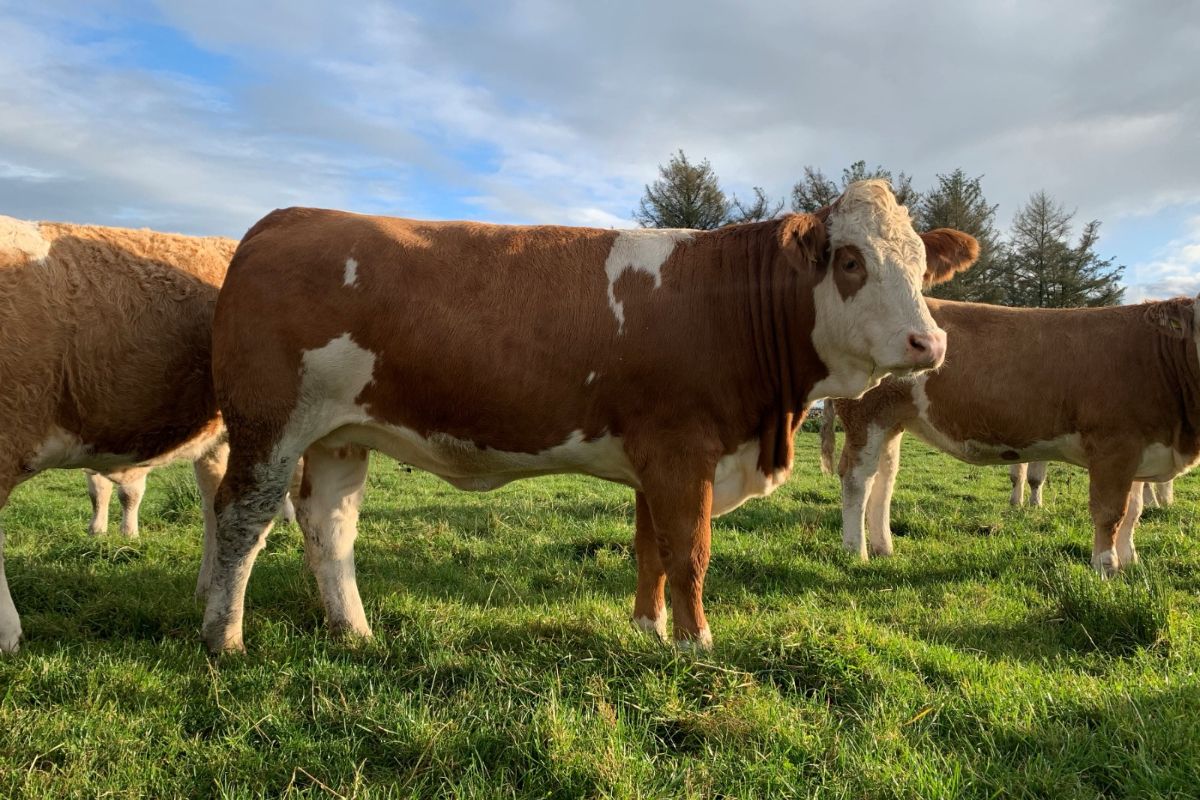 The future of suckler farming in Ireland

John hopes to focus on fertility in the herd alongside growth rate. In addition, he intends to reduce cow numbers to be more efficient and undertake additional embryo transfer work.

“I guess what it takes to be a successful suckler farmer is to try to be efficient. It is all about efficiency and having good fertile cows and produce your calf and rear a good calf every year and to cut down the waste cows that are not doing the job.”

“I think the future of suckler farming is if we can tighten up on efficiency, suckler farming has its place in Ireland. The type of ground we have in the west of Ireland is marginal type ground.”

John offered advice to aspiring pedigree breeders. “My advice would be to study the bloodlines and cow family and make sure the cow family comes from good fertile background.”

“Stay away from the show-type cows and go more for the functional-type cows,” the owner of Portroyal Simmentals concluded.

- Advertisement -
Previous article
‘Extraordinary’ prices for all types at Kanturk Mart
Next article
Deals to €6.50/kg for lambs with ‘favourable’ market outlook