That's FarmingThat\'s Farming Irelands Largest Farming News, Properties and Classifieds Network
HomeBeef‘Life changed forever for me when my husband was involved in a... 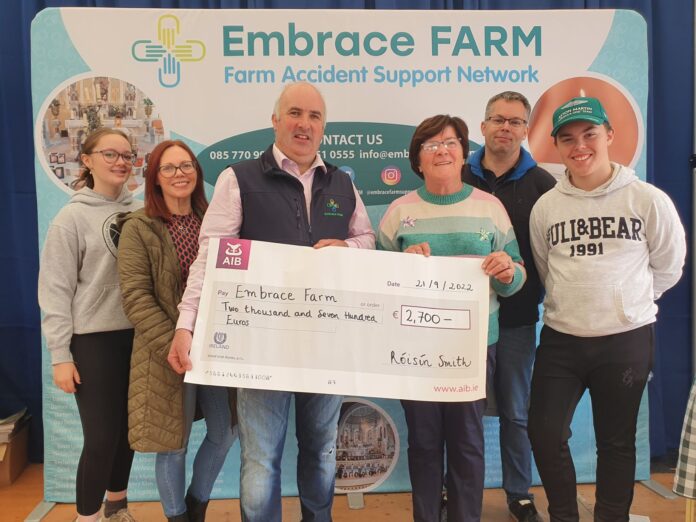 “I was born in Wicklow, the youngest of four children, and grew up in the footholds of the Wicklow mountains.

I was always proud of the fact that I lived beside the third-highest mountain in Ireland, Lugnacoille, and overlooking the sweet valley of Aughavanagh.

There still stands a residence there that was once owned by John Redmond, leader of the Irish Parliamentary Party from 1900 to 1918. It also housed Charles Stuart Parnell.

In my younger days, it became a youth hostel which was frequented by many who came on bicycle or on foot, greeted by a lovely lady known to us as Miss Phelan.

In rural Ireland, at that time, we did not have TV, and radios were a scarce commodity, so we made our own entertainment.

At night, when neighbours called in, it was not unusual to have songs and recitations.

My mother’s favourite was the Escape of Red Hugh O’Donnell. That is where the seed was sown for my love of poetry.

I was educated at St. Mary’s Presentation College, Mountmellick and subsequently, I worked in Dublin for six years.

On a weekend trip to Cavan, I met my husband, Foncie Smith. In due time, we married and had five children. We invested in a house that we renovated and a small farm of land.

Foncie had a full-time job, so I helped with the farm chores, and that was something I loved.

Fast forward to April 21st, 2018, life changed forever for me when my husband, Foncie, was involved in a farm accident and lost his life.

With shock and trauma, I grasped at straws, but support from my family and friends helped me hugely.

I was put in touch with Embrace Farm, a support group for families affected by farm accidents, and this became my second family.

It was founded by Brian and Norma Rohan, who had lost a family member as a result of a farming accident.

Now I have someone at the end of the line, a friendly voice, who was familiar with similar trauma, and who could put me in touch with experts.

My daughters have run marathons to fundraise for Embrace Farm.

Like many other families bereaved or injured by farm accidents, we attend the annual ecumenical remembrance service held by Embrace Farm in Abbeyleix every June.

During lockdown, we were all forced to retreat into our homes, so I wrote some poems.

In the stillness of time, I relived my childhood days. I always loved nature, and I had no further to go than the window. So I penned a book of fifteen poems, which are observations about nature and family.

A little piece of heaven is a small lake just down from my house; its beauty lies deep within my heart.

Beauty is about Crohane, which is situated below Kinsale, right in front of the ocean, opposite the Old Head. Its beauty knows no bounds, and this is where my daughter lives.

Clouds are a meditation about nature and Corona – where we watched the TV and clung on to every word the experts told us.

Harvest Moon was born on a night where sleep escaped me in Crohane, and I looked out of the window for inspiration.

Lockdown speaks for itself. On to Nature Trail, the bird’s eye view and then Our Childhood Days is back in time to my childhood. Green Tee, where I missed my favourite pastime, golf.

Shadows, Snow, The Majestic Tree & Dawn are observations about nature from my window.

Sweet Cootehill is my hometown, and My Christmas of the Past is filled with childhood memories.

Subsequently, I decided to publish a book, sell it, and raise funds for this great charitable organisation.

I collected my books from the publisher on August 18th, and one month later, I was able to donate €2,700 to Embrace Farm.

I will continue to sell them for this cause as a way of saying thank you for the huge support and giving something back in return for the support that they have given me.

Readers can purchase the book at Candlelight Books, 87 Main Street, Cavan, for €15.00.