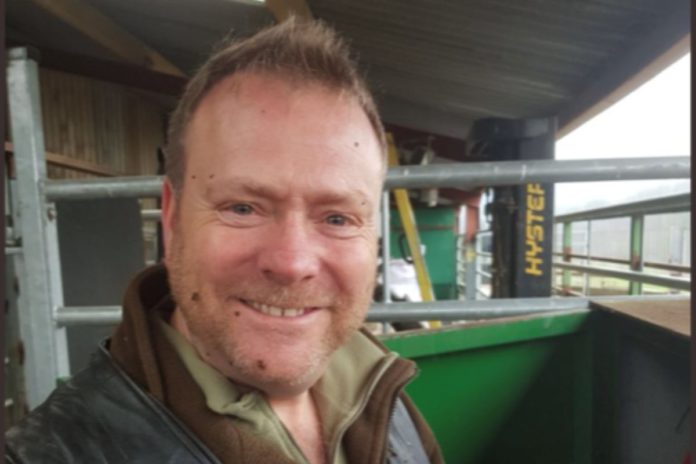 How this pedigree breeder began farming at the age of 40

Darren Norman was not born into farming, but when an opportunity arose to farm coming up to his 40th birthday, he jumped at the chance.

The Flintshire, North Wales purchased a farm with 60-acres (summer 400-acre mountain grazing and 25-acres pasture for Haylage) to lay the foundations for his enterprise. He initially bought 8 Welsh Black heifers and a bull, which rapidly became 30 cattle.

Now he continues to breed pedigree Welsh Black cattle, alongside pedigree polled Charolais, with the assistance of his partner, Peri, who works full-time with the NHS (National Health Service UK).

Steve Davis, a friend, has been helping him with on-farm duties since 2005, while his   nephew, Dan Wahlström, has a workshop on the farm designing and producing bespoke and amazing firepits – Wahlström Fire Pits.

“Like most people, when the bug bites it’s going to go in the direction that you never expected, and along the way, the cost will soar, and numbers will increase. Hopefully, we come through it with the rough plan we set out to achieve a shirt on our back,” Darren told That’s Farming.

“I decided on Welsh Blacks because of the easy-care. The decision on Pedigree polled Charolais was a lot more in-depth. I looked at what was in the UK and why the beef tasted so different in America and Canada.”

“I visited ranches out there and finally decided my route. I bought females with top 5% EBVs, all homozygous polled as I was told, but quickly found the difference in homozygous and heterozygous.”

“I imported dozens and dozens of embryos from Canada (all EU qualified) and semen from Australia, and so my journey into genetics, flushing, and AI began.”

Over the years, Darren’s number of Charolais cattle grew close to the 100 mark, whilst continuing to farm Welsh Black cattle, but he opted to downsize.

He cited the move from commercial bull breeding to focus on specific traits as the reason for the reduction. He sold most of his Welsh Blacks to a core of 12 and reduced his numbers of Charolais to 18 adult females.”

“We flushed the original females with the aid of Wern Vets and built a stock of 200 high grade and quality embryos, some we sell when asked. We use the Welsh Blacks as recipients and I AI, if not held, with a Welsh Black straw, so either way it works.”

“I AI all the Charolais, and I select bull semen I think will best suit to the dam. We carry a stock of 30 different bulls (always hunting for more international semen) mainly homozygous, but with some heterozygous. Through DNA sampling, this gives us the information to match.”

Firstly, homozygous status is very important to Darren, not just from a labour perspective, but also because of its overall viability and a business plan.

Secondly, EBVs are a vital tool to give a tremendous amount of information, especially when “buying an animal blind”, as he termed it.

“It’s not the be-all, and end-all it is down to personal taste. It is important to note some animals develop at certain stages, and this may be missed and effect the scanning results. Also, not every pedigree bull/heifer should become used for breeding.”

Furthermore, good confirmation is an important trait which Darren focuses on.

“Homozygous and heterozygous poll look different from the horned variety, and I have to admit horned do look more impressive but, looks can be deceiving. While meeting the ranchers and chatting, they referred to animals at Sterling sales as dinosaurs-huge and not for the modern-day market. The way it is going; they may be right.”

“The frame is generally less, the head more is feminine, they can be as wide and deep-bodied with equal length, and the back end narrower. The females are, in my opinion, bang on, feminine, milky, calm, and great mothers exceptionally easy calving.”

Like many other farmers, calving ease is a fundamental trait to Darren, with some of their subsequent progeny being the herd’s future stock. Meanwhile, docility is another crucial trait he aims for when breeding cattle.

“We wean at six months, one to give the cow the rest and two they start being a nuisance. Furthermore, we scan at twelve months for EBVs. We don’t push any of our animals.” 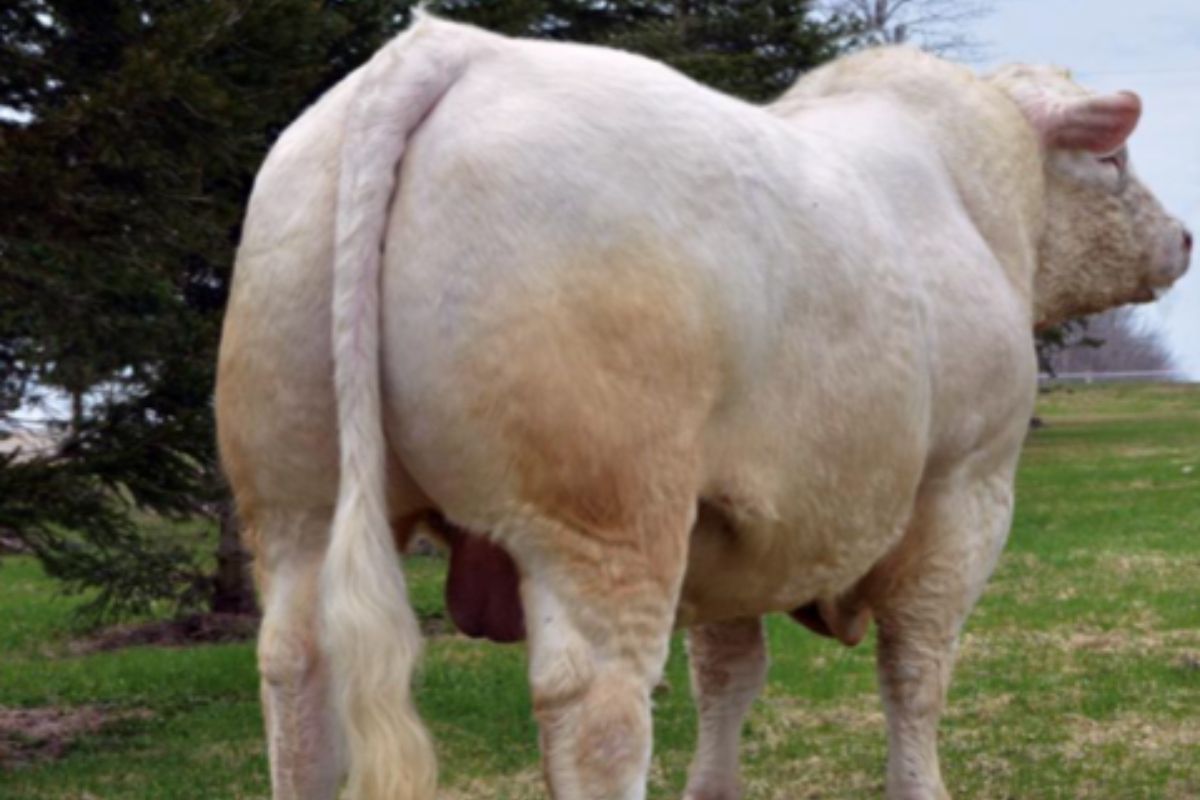 Darren makes an effort to get earlier performance from his cattle, by choice of feeding and selection of breed.

“We all know the vast volumes of feed Charolais consume (2 to 3 times that of my Welsh Black). During my travelling to ranches, a great deal of emphasis is placed on forage conversion.”

“And, I am certainly not qualified to recommend a feeding system but what I have picked up on some do better than others on the same food.”

“So, we selected those, and that is not something you can evaluate when shopping for an auctioned animal. That’s why it’s important to know the breeder.” 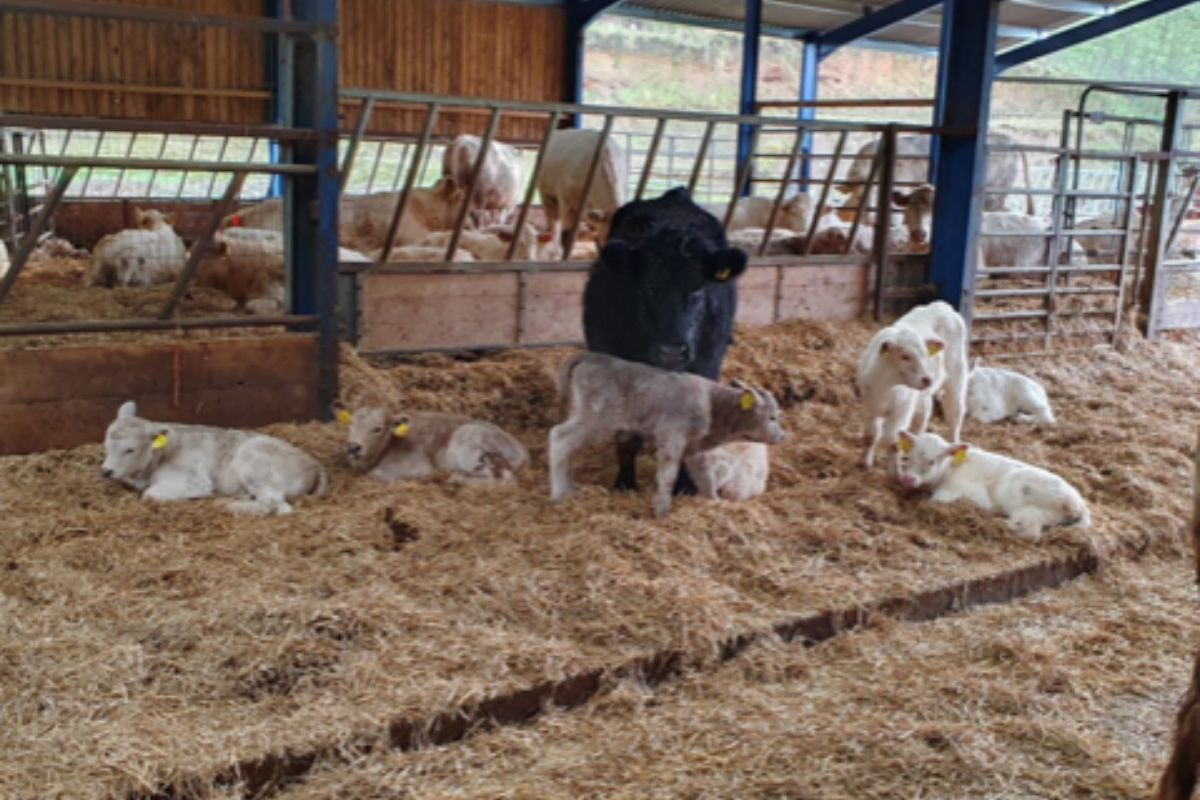 Darren buys in barley and oats and rolls them weekly. He mixes it with a specially formulated blend high in omega oils, quality mineral, and yeast for cattle’s improved gut health.

“This is given twice per day, maximum of 6 kg per bull, 2kgs to females with ad-lib haylage and straw. We would look to be getting to 1.4-1.5kg weight gain per day from the bulls and 1 kg from the females.”

“These cattle are a lean meat animal, but in this day of healthy eating and quality rather than quantity, I think we win. The mince is incredibly lean with good intermuscular fat. Also, the steaks are as good as anything, and very few people eat top or silverside today as a Sunday roast.”

“The kill out percentage is the same, and in fact, you can get better meat percentage to the bone because of less frame growth. Grass-fed means more work for the animal so it can be tougher. Grain-fed has more fat and is a tender meat with a different taste and texture. I go for a balance of both. I could go on about traits, but it’s down to the individual.”

“My only regret is I didn’t farm sooner. Working with cattle was not given to me as an option for a career in Holywell High School. I put more into my farm than I have in anything I’ve done. No, I won’t become rich cash-wise but to see a calf born, never gets old,” the pedigree polled Charolais and pedigree Welsh Black cattle breeder concluded.