That's FarmingThat\'s Farming Irelands Largest Farming News, Properties and Classifieds Network
HomeBeef‘The people that will stay in suckler farming will do it for... 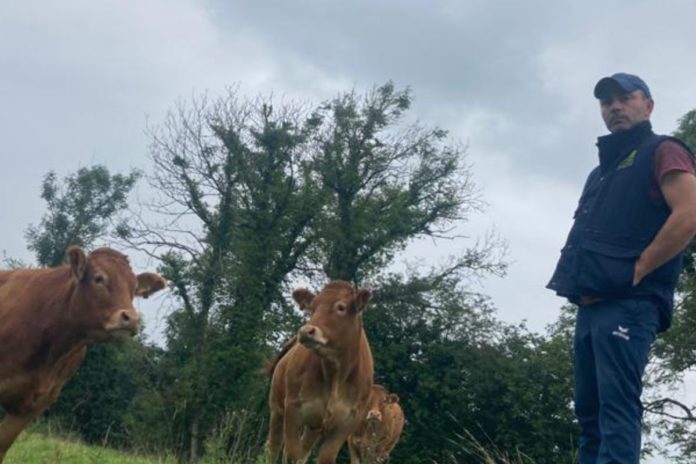 In this week’s Suckler Focus, That’s Farming speaks to pedigree Limousin breeder, Alan Fitzgerald. He discusses calving within a 5-month window, moving away from mainstream sires to outcross genetics and his view on the proposed suckler cow cap.

Alan Fitzgerald, from Moate, farms a 10-cow pedigree Limousin herd under the Hudson prefix and four commercial cows on 40-acres.

The County Westmeath native’s passion for farming stemmed from assisting on his father’s and neighbour‘s farm.

“I went and bought 22 calves off a dairy farmer when I got my first job. So, I reared them with the plan of running them with a bull and to start suckler farming,” Alan Fitzgerald told That’s Farming.

“Back then, I had a foundation base of Hereford-cross cows and bought an Angus bull in Cavan. I bred all my heifers, and I had a batch of heifers out of that as a base.”

Alan sold his Angus bull and bought a Limousin bull from the Liscarn herd at Carnew Mart.

“The reason I changed from Angus to Limousin was I felt the Angus suckler calf was not commanding the same price as the Charolais or Limousin at the same age when presented in the weanling sales.”

He later developed the herd by sourcing a Gamin Limousin heifer out of a Lutterlstown dam from Ambrose Galvin.

“I liked the look of her and bought a cow and calf at foot with the idea I would keep one, and when it came to the time to replace my bull, I would breed the bull.”

“When you have one female heifer, you start looking and get an interest in the breeding lines and what is happening around you.”

“I bought a few in-calf heifers carrying embryos from Laurence O’Sullivan, in south Kerry. I got a Rodnick Hawk heifer out of that batch, and she bred well for me.” 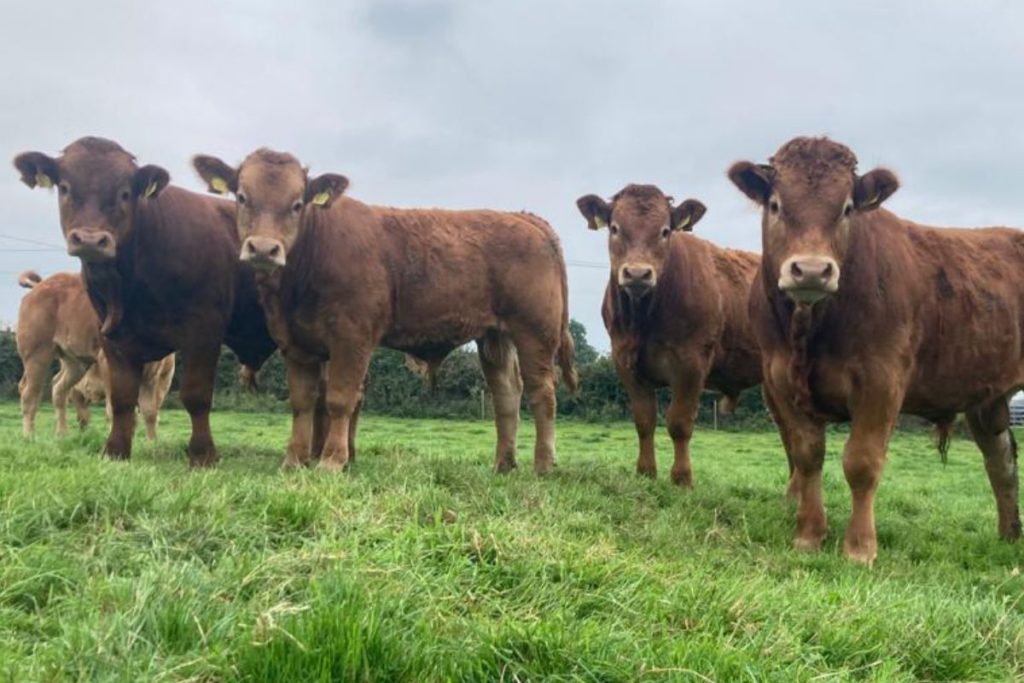 Alan outlined why he chose the breed and the traits he seeks in his Limousin females. His focus on the breed began as a result of their easy-calving trait

“I look at the Limousin, and they are a well-formed animal. They have a lovely head and great conformation.”

“If you have a Limousin cow, she is a pure mother and has great nature to her. When she calves, the calf bounces off the ground, and is up and going.”

“I feel this is what all farmers want, a lively calf that can fend for itself. I have, on a good few occasions, watched one of my cow’s calf from home with the calving camera, get up and suck the cow.”

“Moreover, I feel the Limousin breed has a great food conversion ratio. ICBF reports I received from previously sold animals show that kill out weights are as good as there is out there.”

“My ideal cow can produce a 400-450kg calf at weaning per year off grass. If you have this, the cow will have milk, be fertile, and genetics to back it up.”

“I am leaning back towards a smaller cow over the past few years, but she needs to be well-made.”

Alan commented on the performance of the Limousin breed in Ireland.

“I think Irish Limousin are in a good position in Ireland. The proof is in the pudding; if you have a quality bull, in general, you get a good price.”

“The champion bull in the other breed sales would be comparable to Limousin top prices. However, if you look at the price spread, there will be a higher percentage of Limousin bulls between the €5,000 to €8,000 mark.”

“The Irish Limousin Cattle Society is doing a good job promoting the breed, coupled with the breeder’s drive to improve genetics has resulted in a marked change in the Irish Limousin cattle over the past 20 years.”

“I can remember going to sales in Carlisle and being amazed at the size and power of young bulls compared to Irish bulls.”

“The Irish breeder has come a long way in the past twenty years. This is evident in the number of well-known English breeders that are present and purchasing at Irish Limousin Cattle Society sales.”

“Irish Limousin breeders are expansive. The mixture of bulls available is always growing and, breeders are always using new bulls to try and improve.” 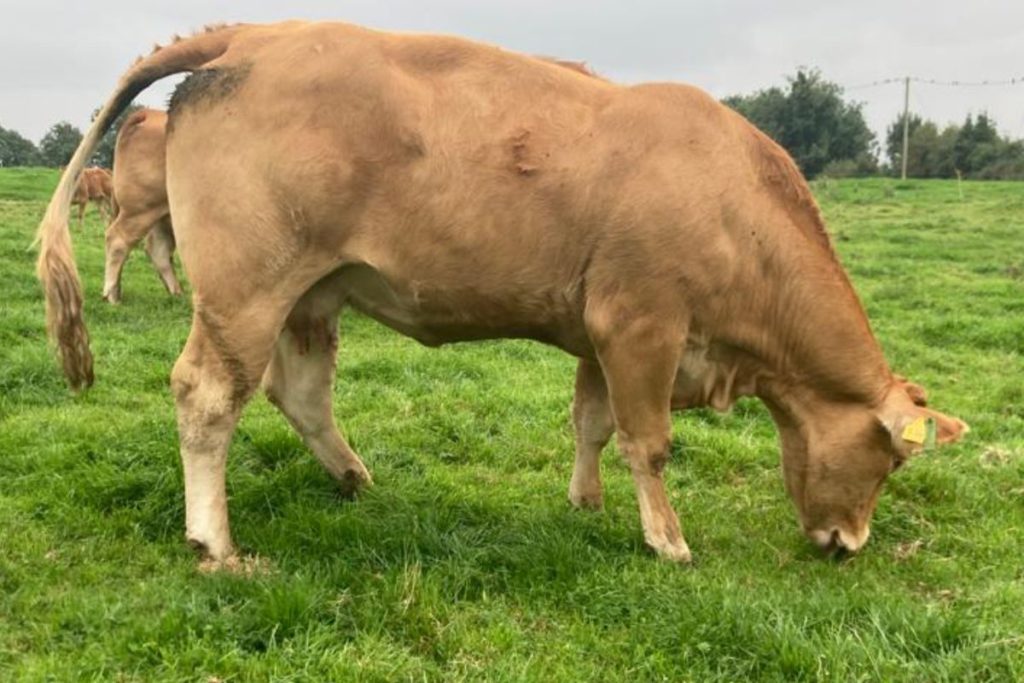 Alan aims to choose a breeding programme “away from mainstream sires that might produce an outcross bull that pedigree breeders would be interested in.

The farm implements a breeding programme of 100% AI.

The farm intends to continue ET work and potentially purchase some French embryos in future years.

Calving takes place from September to January on the farm, a system which enables him to sell progeny at 15 and 17-months-old that between March and May.

Cows calve within a 368-day calving interval. One mature cow in the herd is weighing 960kgs, with two to three-year-old cows hitting the scales at 600kgs.”

“When the herd was comprised of completely commercial sucklers, we used to calve down twenty-five cows inside six weeks. We had them on the money, and anything that fell outside the breeding window was culled.”

“My calving system does not sit in the compact calving bracket, now. I have decided that due to the amount of effort required to get a bull ready for sale, it is more manageable for me to spread it out over a few months.”

“If you have a compact calving system and you have five bulls with all them maturing within six weeks of each other, due to the age of my family, I could not manage this.”

“I know the impact of that, [spreading out the calving window and I understand the cost per day analysis, an empty cow, and all this, but as it stands, I do not see compact calving as a driver for me.” 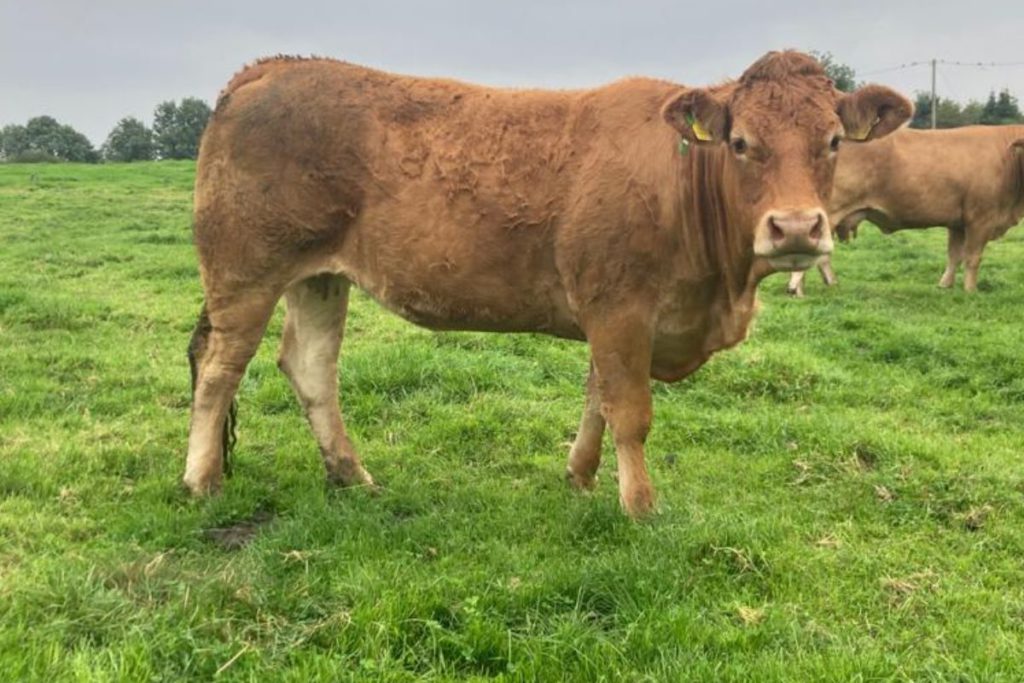 “The last couple of years when the children came along, I did not have time to attend the sales, so leading a bull was not an option.”

“I sold more off-farm in the last years than through the society sales. People come to the yard and look at the bull, and we deal there.”

“I am happy to say that I have had a few return buyers recently, so I must be doing something right.”

“Furthemore, I have had a high percentage of bulls born over the years. I only had a few heifers, retain one or two heifers and see how they mature at a year-and-a-half and decide whether to breed them or not.” 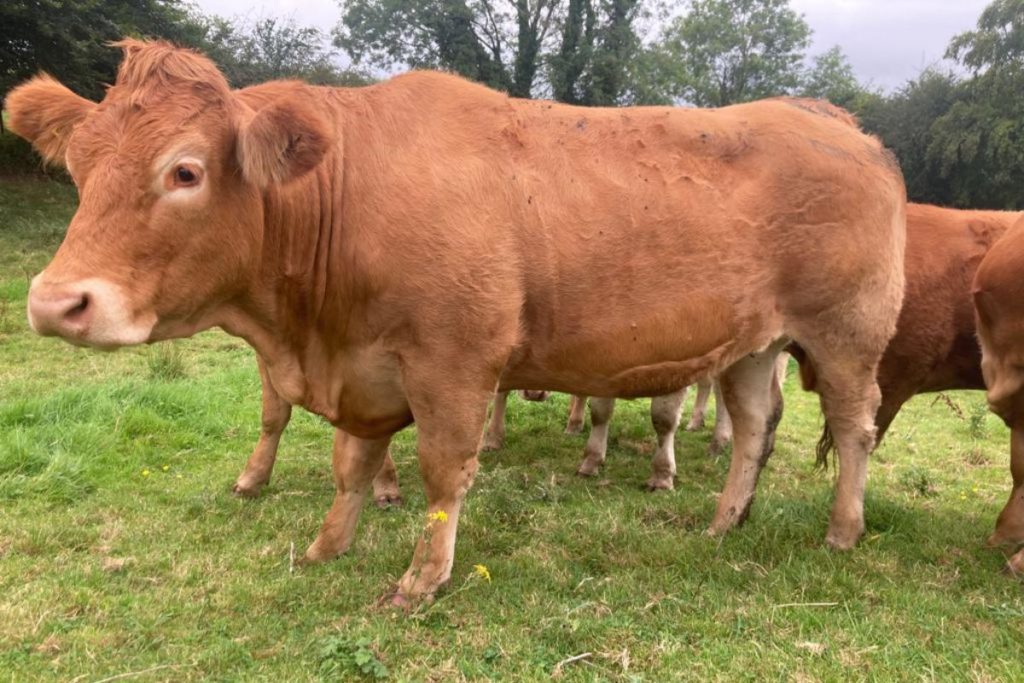 Alan attended shows and sales in the past, receiving 1st and 2nd places in his respective category.

He and his family attend local agricultural shows in Moate, Athlone, and Cavan.

Over the next five years, he plans to upgrade the farm’s infrastructure, reseed four plots of land and install a handling facility in each parcel for ease of access for AI.

Alan also would like to introduce a strict breeding policy and admitted he got relaxed n this area when it came to “giving a cow in heat another chance.”

“I am going to be very hard on them now if they are not producing. I hope to improve the quality of the cattle and not the quantity.”

Alan shared his thoughts on the future of Irish suckler farming.

“The reason I am in suckler farming is I have a love for farming. You could not sustain a family with it.”

“I feel the small herd and suckler farmer’s time are numbered. I have in my head that to survive as a suckler farmer, you have to be as big as a dairy farmer.”

“You have to be up in numbers to make anything that would resemble a living. But, then, when you have the numbers, you have to be there the whole time; where is your work-life balance?”

“You cannot pay another person to run the farm when you go on a week’s holiday’s twice a year,” the pedigree Limousin breeder added.

“There are easier ways of making a living; there is no doubt about that. The people that will stay in suckler farming will do it for the love and not the money.”

Alan shared his view on the proposed suckler cow cap as part of the Suckler Carbon Efficiency Programme.

“This does not make sense to me. We are talking about capping the number of suckler cows while the dairy cow numbers are growing year on year.”

“If we are looking at the carbon footprint of farming, then we need to look at it holistically. Maybe, this has been part of the decision.”

“I believe the majority of suckler farmers have a patchwork of accessible grazing, which means natural hedgerows and trees ect. Very few dairy farmers have a similar setup as it is unworkable.”

“The dairy farmer will optimise every square meter of their farm for grass. The only hedge is the boundary one. A suckler farmer in a high percentage of instances has hedge all-around their farm.”

“So, no one is looking at the carbon bank on a suckler farm and giving credit for it.”

“At the minute, suckler farmers seems to be the scapegoat while other areas of Irish farming are getting a free pass,” the suckler farmer concluded.